Update: City manager says he will not accept resignation of Tucson police chief

Tucson Police Chief Chris Magnus said Wednesday that he is willing to resign from his job after details were released, for the first time publicly, about a 27-year-old man who died while in police custody two months ago.

Carlos Ingram-Lopez died after being restrained by police officers in the early morning hours of April 21. An autopsy report released by the Pima County Medical Examiner’s Office showed that Ingram-Lopez had high amounts of cocaine in his system and a preexisting heart condition. He went into cardiac arrest while restrained, but the manner of his death was listed in the report as “undetermined.”

The incident involved three officers, all of whom resigned late last week before an internal investigation was completed. Magnus said if the three officers hadn’t resigned, they would’ve been terminated for “multiple policy violations.”

“As part of our investigation into this case, which we initiated ourselves, we have determined that three involved officers committed multiple policy violations and failed to handle the incident consistent with their training,” Magnus said. “It is, however, important to note there is no indication of malicious intent nor did any of the officers deploy strikes, use chokeholds, or place a knee on Mr. Ingram-Lopez’s neck.”

Magnus did not respond to comments about what the officers should have done differently but mentioned that when it comes to standards of care for someone in a medical or mental health crisis, the officers did not live up to their training.

Magnus’ offer to resign will be forwarded by the city manager with a recommendation to the mayor and City Council, who would then vote to accept or decline his offer to leave the job. Several council members said they would not accept his resignation.

Ingram-Lopez was restrained by officers after his grandmother called the police and reported he was behaving erratically and running around the house naked.

The body camera footage — released for the first time Wednesday — showed officers approach the home and follow Ingram-Lopez into a dark, closed garage where he was eventually handcuffed and placed face-down after a struggle.

He screamed and groaned while face-down on the garage floor, asked for water repeatedly, in both Spanish and English, and said that he couldn’t breathe. Officers did not appear to be obstructing his airway. Early in the struggle, an officer could be heard saying they did not use force and that the man appeared to be “on something.”

“Nana, nana, please some water,” Ingram-Lopez can be heard on the video.

The officers told him several times to “calm down” and to “relax.” At one point in the video, an officer told Ingram-Lopez that if he did not calm down, he would be shocked with a Taser.

The officers covered Ingram-Lopez’s body and head in yellow emergency blankets that they keep in their patrol vehicles. A spit guard, a meshlike covering, was also placed over his face. Ingram-Lopez would remain still for a few minutes then begin struggling again.

After 12 minutes, the officers realized that Ingram-Lopez was no longer responsive.

Believing that he may have overdosed, the officers administered Narcan to try to revive him and then began performing CPR as they waited for medical personnel to arrive.

At one point as they try to revive him, an officer is seen telling Ingram-Lopez’s grandmother to “stay inside” and “close the door.”

“What happened to my grandson?” she asked. “He’s not responding.”

“In the video, we see a person who is clearly distressed, asking for water, asking for help, asking for his nana,” said Romero. “Now we must center the conversation on police accountability and transparency. When officers do not perform as trained, they need to be held accountable.”

Attempts to contact Ingram-Lopez’s family were unsuccessful, but it is known that he was survived by his 2-year-old daughter.

Two of the officers, Routledge and Jackson, had no prior history of complaints through TPD’s Office of Professional Standards, formerly known as internal affairs. Starbuck, however, has one sustained complaint from January 2019 for the improper search of a prisoner.

Three other officers were also involved in the incident, but all three were cleared of wrongdoing by the investigation.

No criminal charges have been determined at this time. Whether Routledge, Starbuck and Jackson will be allowed to keep their state license is in the hands of state officials.

In addition to TPD’s internal investigation, the case is also being reviewed by the Pima County Attorney’s Office. Magnus said he also requested the FBI review it.

The County Attorney’s Office, which has already received the case from the Police Department, would not comment.

The department is also under scrutiny for not disclosing details of Ingram-Lopez’s death until Tuesday. When asked why it took so long to notify the public of the in-custody death, Magnus said it was a “serious misstep.”

“I’ll remind you that this incident took place at the start of the most intense period of the COVID-19 pandemic, and I believe the notification process to the public could have been missed, at least in part, due to some of the chaos that was going on during that period. But nonetheless, public notification should have happened,” he said.

Romero said she and the council first found out about the incident on Wednesday, June 17, and reviewed the footage on Monday, June 22. Officials said they were waiting to meet with the family before the information could be released following the conclusion of the investigation.

While an investigation into the death was started right away, Magnus said the footage of the incident was not immediately reviewed by him or other department leaders. To address this issue, he said that a new policy requires that at least two assistant police chiefs view any footage involving an in-custody death within 48 hours.

“I accept responsibility for both these serious missteps, although I believe neither was the result of any sort of malevolence or deliberate attempt to hide anything,” Magnus said. “But I realize, given the times we’re in, any mistakes of this kind are viewed with great suspicion and contribute to the lack of trust in the police.”

According to Magnus, this is the 12th in-custody death that has occurred with TPD over the last 10 years. Seven of those deaths were determined to be suicide and the remaining five people died after being restrained.

“Each case was carefully reviewed and no officers in prior cases were found to be criminally responsible,” he said.

During the news conference, Romero emphasized the need to make changes that support the safety of the community.

“I know that the actions of these officers are not reflective of the department, whose officers are professional, hardworking individuals with deep roots in our community,” she said. “Events like these remind us that even the most progressive police departments with some of the most forward-thinking policies and rigorous training are not immune to failure.”

Romero proposed a framework that she said would “change how we serve our community” by ensuring that the Tucson City Council and public are immediately notified of any in-custody deaths, creating a community safety division that would bring together mental health resources, social workers and other support services, making changes to the Community Police Advisory Review Board, which reviews external complaints of police misconduct, and strengthening the role of the department’s independent police auditor, which receives complaints against police.

“It is important to acknowledge that the life of a fellow Tucsonan, Carlos Ingram-Lopez, was needlessly lost. Any loss of life is tragic,” Romero said. “People are mad. People are disappointed. People are outraged. And rightfully so.”

Before offering to resign Wednesday, Magnus said he believes Tucson has one of the best police departments in the country, expressing condolences that this incident might cause the community to lose trust.

“To demonstrate my willingness to take accountability for these mistakes, I am offering my resignation to the mayor, city council and city manager, which they can accept or handle as they view appropriate,” he said.

Mayor Romero, who stood near the chief during his remarks, said she was unaware of Magnus’ intention to resign but that he has been an “honest and great police chief for the city of Tucson.”

Several other council members have also voiced their support for Magnus, saying they don’t believe this incident was reflective of the values of the chief or the department.

Councilman Steve Kozachik said he supported Romero’s suggested remedies, “but there is no reason for Magnus to resign.”

According to Kozachik, City Manager Michael Ortega will make a recommendation to the council regarding Magnus’ resignation, and they will vote to accept it or not.

Councilman Paul Cunningham said he thinks “it would be a mistake to let Magnus go.”

“I have already asked the chief not to resign,” he said. “While the incident from April is tragic and demonstrates the need for police reform, our chief has a track record of being community-oriented and as a police reformer.”

When asked if she would accept Magnus’ resignation, councilwoman Nikki Lee simply said, “That’s a ‘hell no’ from me.”

Even as her peers maintain support for the police chief, council member Lane Santa Cruz seemed unimpressed with Magnus’ offer to resign

“Chief Magnus’ offer of resignation is a deflection from the real issue at hand,” she said. “If Chief Magnus wants to leave, that’s on him. But Tucson is our home. Leaving for us is not an option. We need answers and justice for the Ingram-Lopez family.”

No suspects are currently in custody, police said.

Across Pima County, 6,546 cases of coronavirus have now been confirmed, up 228 cases from the day before.

Police ID man killed in crash on Tucson's southeast side

The crash happened in the area of Irvington and Kolb roads.

Mayor Regina Romero also said Thursday that she did not support the resignation offer of Chief Chris Magnus.

Also: A congressional candidate pickets the mayor's house, the Tucson police union lashes out at a city council member, and a voter admits casting ballots in two counties, including Pima, in the 2016 election.

Carlos Adrian Ingram-Lopez’s family stood side by side near a shrine filled with candles to honor their loved one. They all wore a white T-shi… 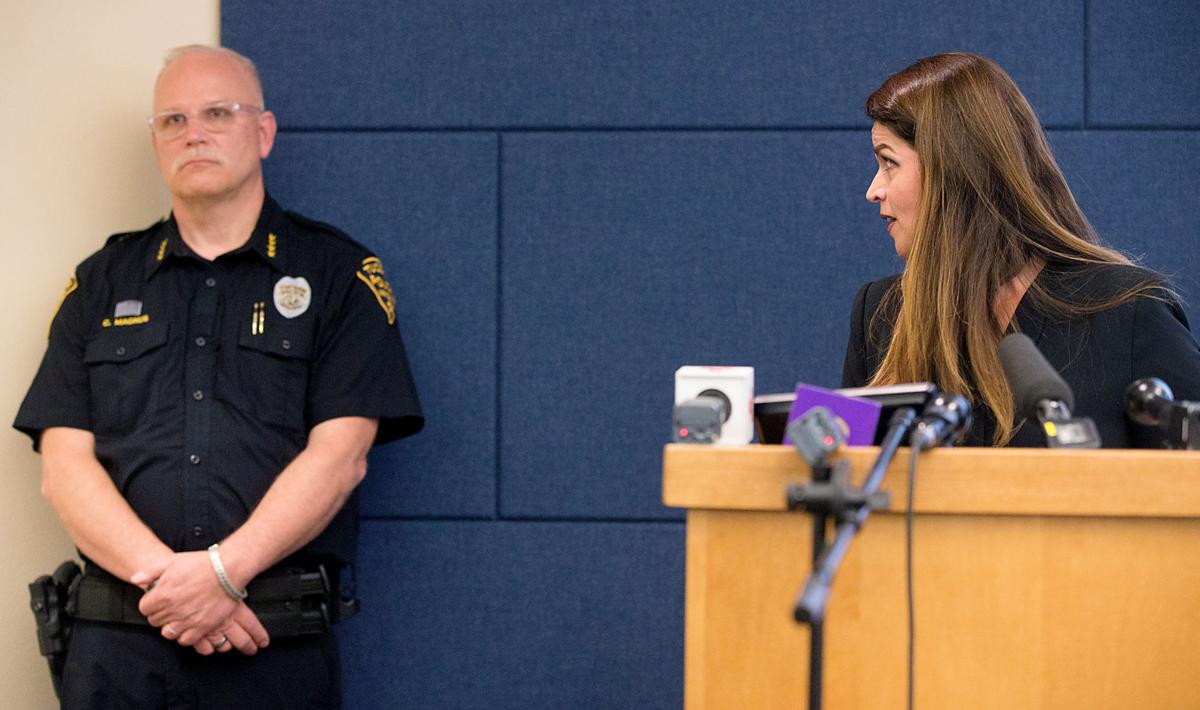 Tucson City Mayor Regina Romero says she wasn’t informed in advance that Tucson Police Chief Chris Magnus planned to tender his resignation. Magnus made the offer after playing a harrowing video showing the death of Carlos Ingram-Lopez in police custody on April 21. 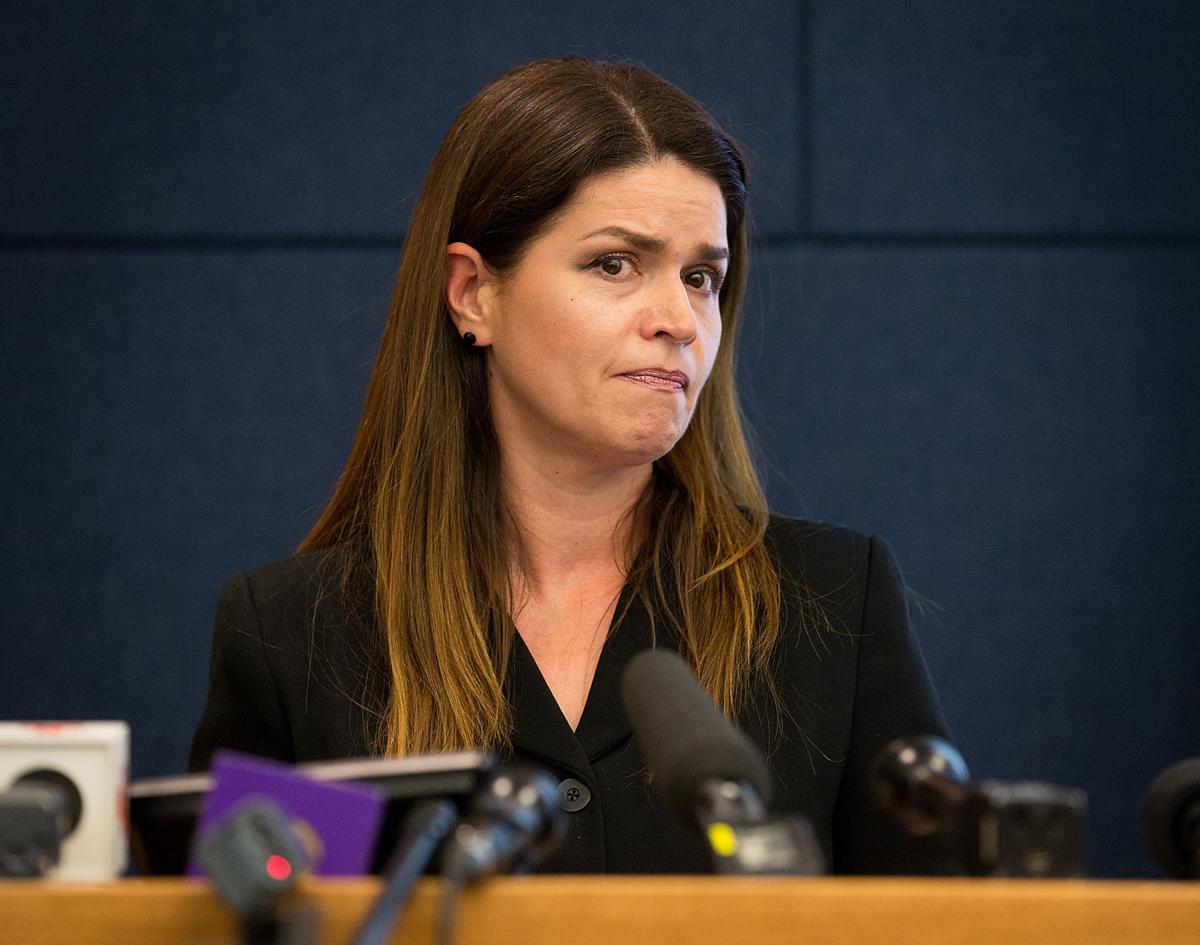 A couple of letter writers say Tucson Mayor Regina Romero was wrong to come out publicly against a proposed effort to show support for the Tucson Police Department. 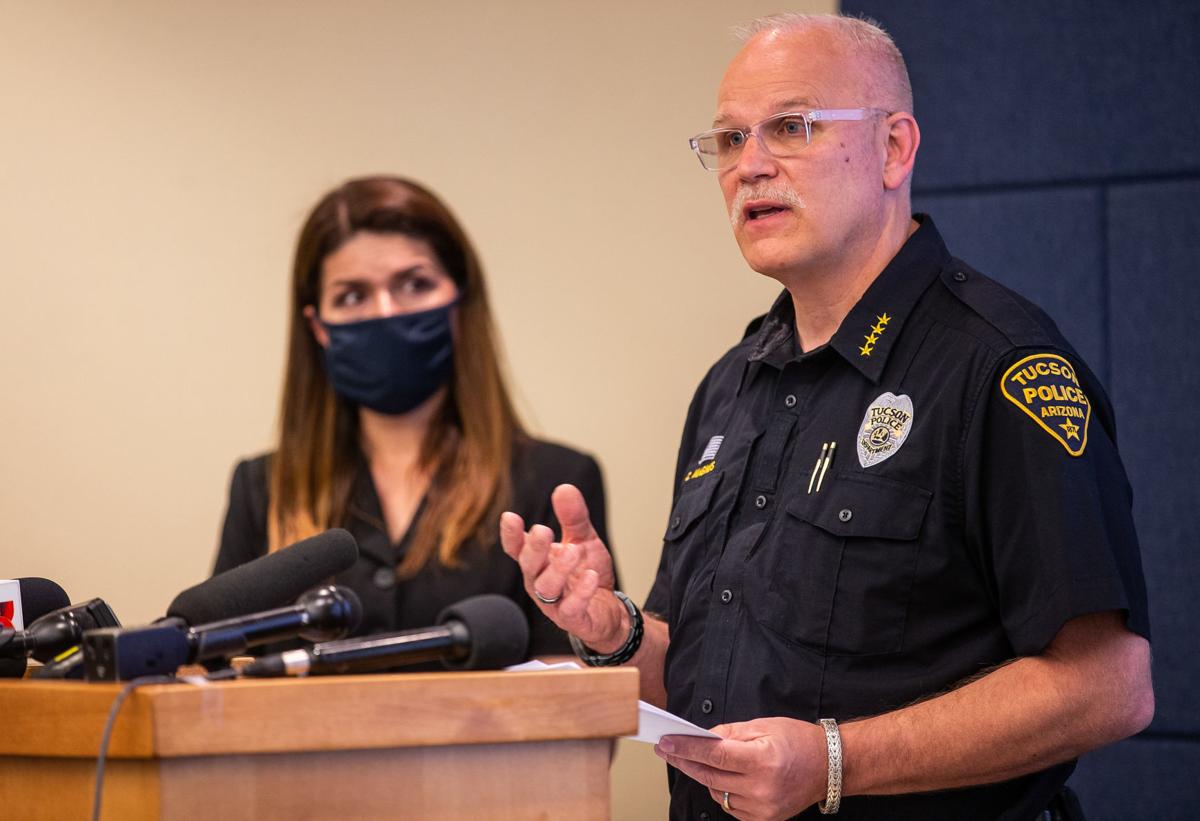 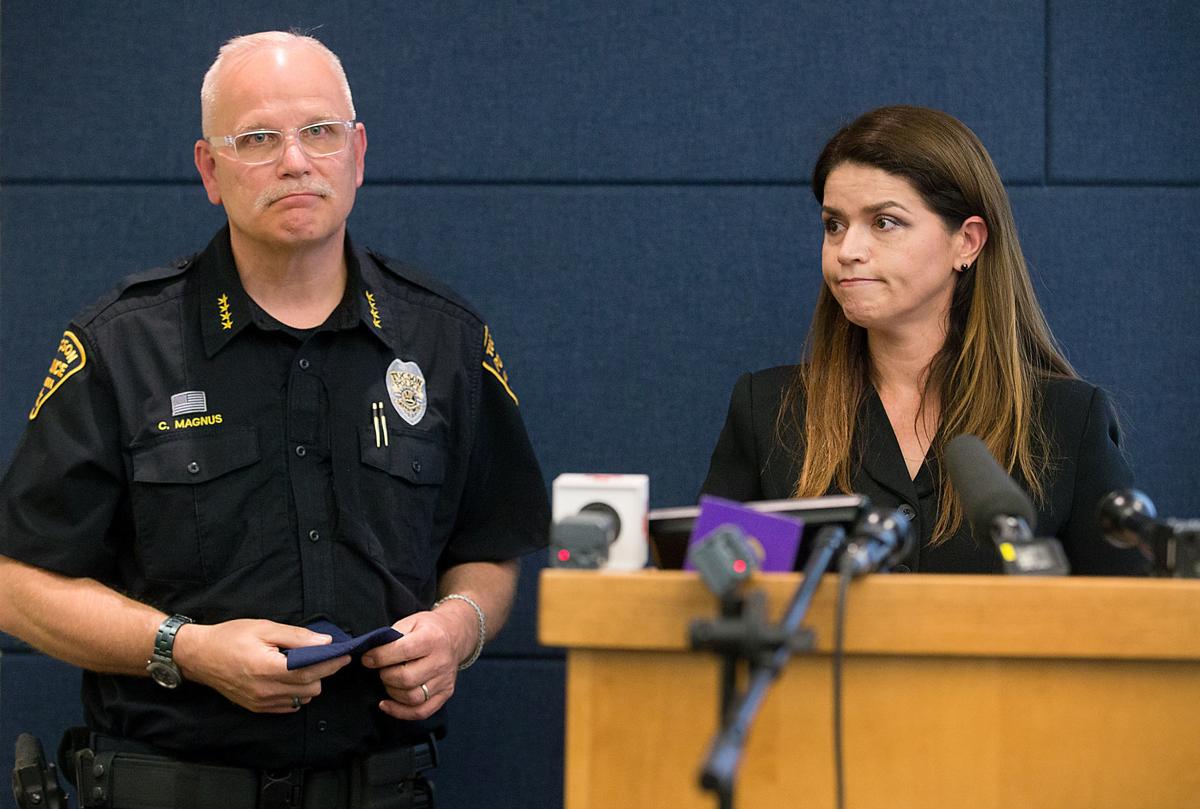 Tucson Police Chief Chris Magnus, left, and Tucson City Mayor Regina Romero during a press conference regarding the in-custody death of Carlos Ingram-Lopez on April 21. Magnus offered his resignation during the press conference on June 24, 2020.

Tucson Police officers who resigned after an investigation into an in-custody death in April, 2020. From left, Samuel Routledge, Ryan Starbuck and Jonathan Jackson.