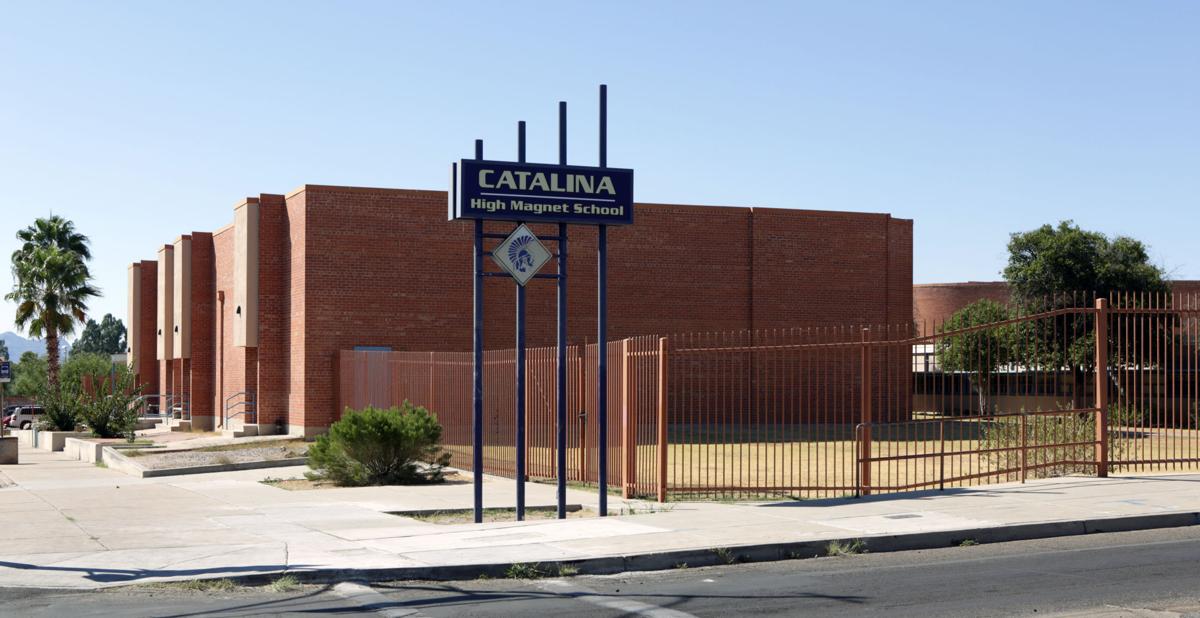 The Tucson Unified School District is considering giving the high-achieving University High School its own campus by allowing it to take over an existing high school.

A proposal presented to the TUSD Governing Board Tuesday night calls for UHS to move into Catalina High School, three miles west at 3645 E. Pima Street.

After years of discussing the idea of separating UHS from Rincon, where it has been co-located for more than 20 years, the board debated the plan Tuesday, but no immediate action was expected.

The move would also likely include a plan to establish a new high-standards middle school on or near the new UHS campus, tentatively named Gabrielle Giffords Middle School, after the former U.S. congresswoman who graduated from UHS in 1988.

More than 100 people turned out for the study session on the proposal, mostly to urge the board to support the proposed move of UHS to its own school. UHS students carried signs urging the board to give them their own campus.

University High School, which requires students to test in for admission, is the gem of TUSD.

It is the No. 1-ranked high school among all Arizona noncharter high schools, serves a diverse population that is more than 36 percent Hispanic and has produced more National Hispanic Scholars than any other high school in the nation.

Jahaziel Felix, a first-generation American and UHS student, made an impassioned plea for the board to make the plan a reality.

He noted that the teachers at UHS push him to be a better student and a better person and encourage the students to “become the best versions of themselves possible.”

“Our classrooms are incredibly cramped and crowded, impeding our ability to hear and learn effectively. This past year over 1,000 students applied for UHS; however, there’s only space for a few hundred,” he said.

And that’s one of the main reasons proponents of the plan want to split UHS from Rincon. The shared Rincon-UHS campus is above capacity.

The Rincon campus was built to serve 2,000 students, but between the two schools, serves 2,200.

Catalina, on the other hand, is seriously underpopulated.

By combining the 740 Catalina students with the 1,110 Rincon students, Rincon would serve about 1,850 students, or near its capacity.

Proponents of the plan, including TUSD Governing Board member Mark Stegeman, who has spearheaded the concept for years, argue that filling two schools to near-capacity is a better use of resources than having one overcrowded school and one that is under capacity.

They also note that the high-achieving UHS draws students from around Pima County, including from outside the TUSD boundaries, and said that giving the school more room would likely increase not only the district’s student population, but the state funding that would come with more students.

The proposal is still in its infancy, but would move fast if approved by the board.

According to a report drafted by UHS staff, the proposal could become a reality at the start of the next school year.

The plan has support from a variety of stakeholders, including the Palo Verde Neighborhood Association, Giffords and University High staff, its alumni association and its parents’ association.

But the most important stakeholder, the plaintiffs in the district’s longstanding desegregation case, and the Special Master overseeing the case, have not yet weighed in.

Alexander Velgos, a social studies teacher at Catalina, told the Governing Board during the call to the audience that the school serves a diverse population of students who would be harmed if they were forced to move to a new school.

Fred Sandlin, a business owner in the area whose daughter is a freshman at UHS, said he came to show his support for a plan that makes “just plain sense.”

“I’m here because I was told there were some people not in support of this change. Apparently I was mistaken,” he told the governing board.

Betts Putnam-Hidalgo, a TUSD parent who has repeatedly run for the school board, said the plan the board was preparing to study was “very beautifully fleshed out — from one side.”

“There is absolutely not one word about the effect on the kids at Catalina,” she said.

Should University High School take over the Catalina High campus?

Find out who landed on the 2017 Best High Schools list.

TUSD board seeks to assuage fears of undocumented students with resolution

Ka’Deem Carey spent Wednesday afternoon in Chicago, cleaning out his house and getting ready to move back to Tucson. Carey plans to spend the …

As part of settlement, county seeks $7.5 million in base improvements.

Panel votes to investigate if a senator broke the law in how she gathered signatures to thwart expansion of the school voucher program.

Man was hit by a dark-colored vehicle.

Tales from the Morgue: A busy Monday morning for the judge

If the police were busy with traffic violators and other miscreants over the weekend back in 1927, that meant that the police judge would have…

Longtime Tucsonan rarely takes time off from baseball: "This is who we are and what we do."

Saguaro National Park officials believe the damage could be lethal to the giant plant.

It's unclear if the suspect shot himself or was shot by sheriff sergeant.

Mornings will be cooler, but daytime temps are running above normal.

2 injured when SUV carrying 7 people rolls over in Marana

Daytime highs are still running a few degrees above normal.

Website says this Tucson bookstore is one of the coolest in the U.S.

These bookstores will have you thinking about taking a literary road trip.

Watch: A bear is roaming Rio Rico this week

A bear has been spotted this week roaming the Rio Rico area.

Deputies are looking for help identifying a man they say pummeled a Circle K clerk days after being refused a courtesy water cup.

Hot titles: These books are in high demand at Pima County libraries

The Reid Park complex, including the zoo, is without water.

Bicyclist in critical condition after crash with SUV in Sahuarita

The crash is under investigation.

See who's financially supporting the efforts for and against the sales tax.

Plaintiffs fear the TUSD desegregation case is wrapping up without improvement.