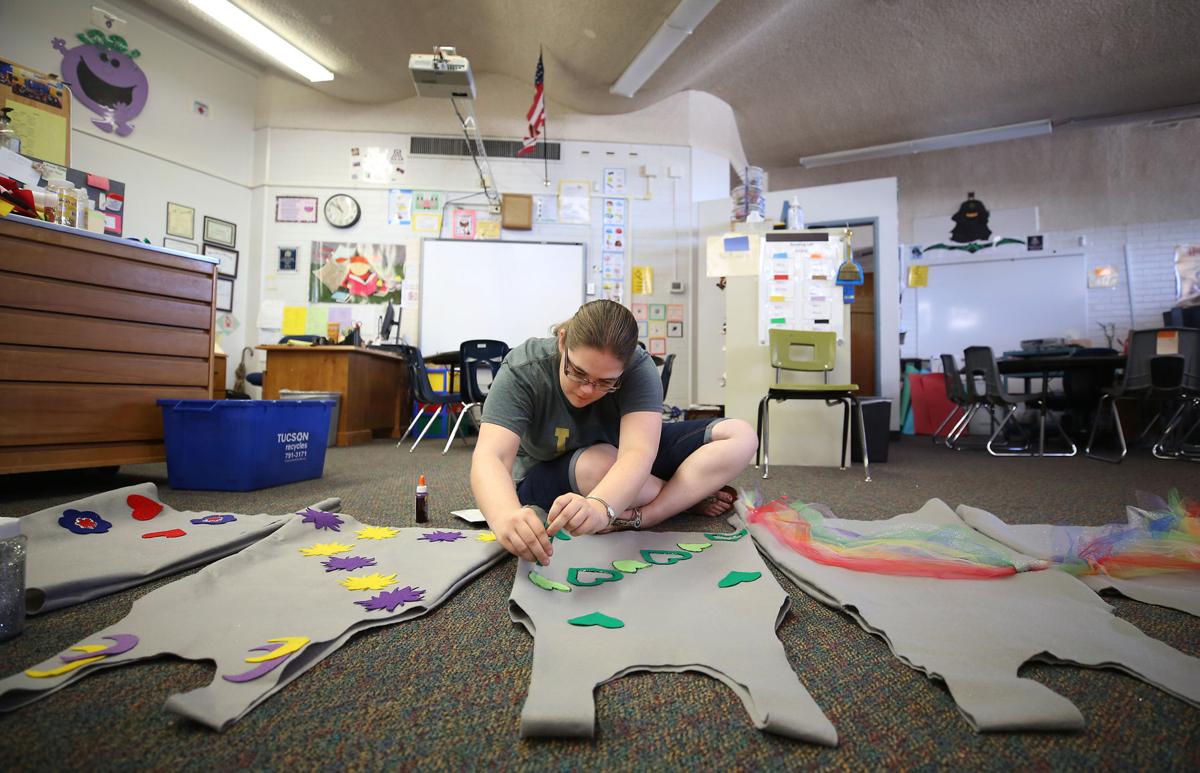 Low ceilings and jury-rigged technology are problems at Walter Douglas Elementary, where Allison Dewey works on Halloween costumes for teachers. 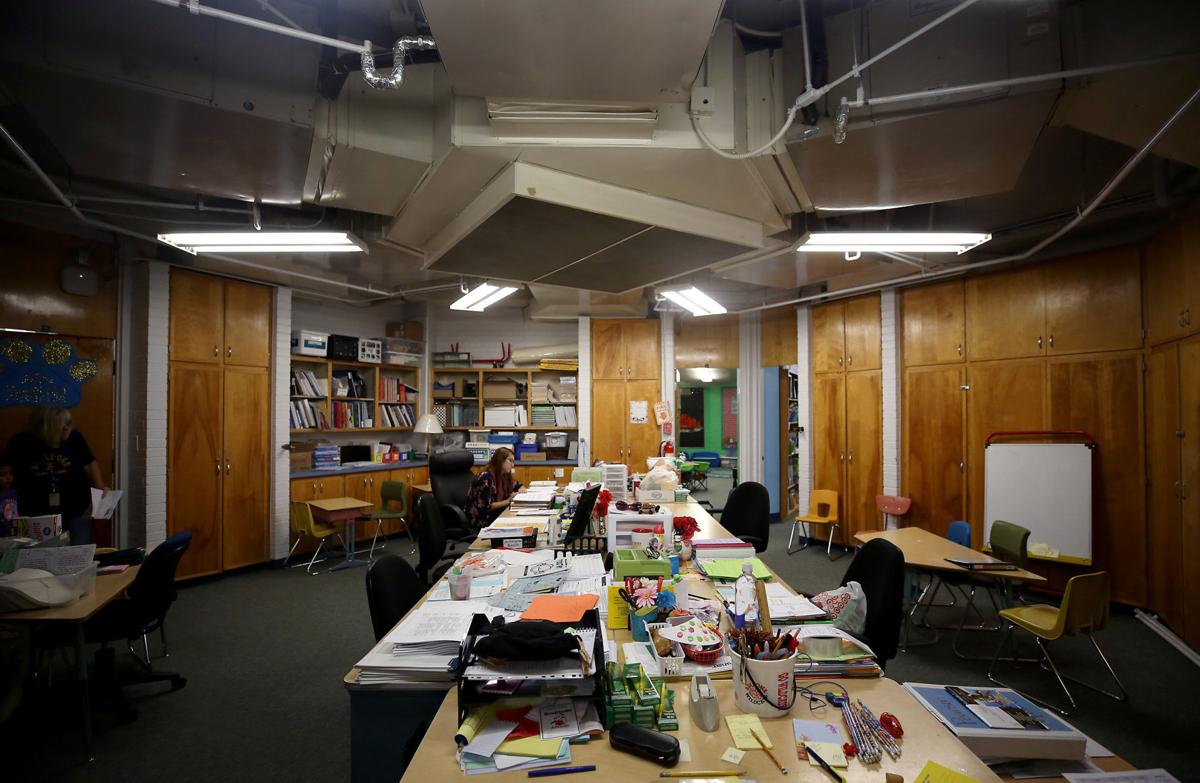 Air-conditioning duct work can be seen hanging from the ceiling in one of the classroom pods at Walter Douglas Elementary School, 3302 Flowing Wells Road on October 06, 2017.

Saying the state has ignored its responsibility to maintain school facilities, two local school districts are asking voters to pay for the improvements themselves by approving multimillion-dollar bonding packages in the November election.

The Tucson Unified School District, the largest in Southern Arizona, is asking voters to approve a $180 million bond — which administrators said will cover only part of the immediately necessary upgrades to the district’s 86 schools and other hard assets, such as buses, school doors, fire alarms and fencing.

The Flowing Wells Unified School District is seeking a $24 million bond, most of which would go toward scrapping school buildings that were designed for an era predating the internet and even air conditioning, but would also be used to replace old school buses, technology, furniture and playground equipment.

The districts say the amounts they’re seeking would barely cover decreases they’ve seen in capital funding from the state since lawmakers started slashing funding during the Great Recession.

Ricky Hernandez, chief financial officer at the Pima County School Superintendent’s Office, noted that TUSD and Flowing Wells are two of the oldest school districts in Tucson and since the recession they’ve lost nearly a decade’s worth of funding from the Legislature, money that was used to maintain and upgrade schools.

The need for bonds “goes back to the fact that there’s a lack of overall state support to our local schools,” he said.

TUSD has been hurting for capital funding for so long that when the district closes a school, the maintenance workers go in and — like angry tenants who have been evicted — scavenge anything that isn’t bolted down — and some things that are.

“We get creative,” said Bryant Nodine, the district’s director of planning services.

Nodine noted school employees aren’t breaking the law — TUSD now includes a clause in all of its sale contracts stating that the district can take the school assets it needs.

But, he noted, it’s a clear signal of how bad the district needs capital repairs when its workers are scavenging things like doors, whiteboards and air conditioner parts.

“We do that with every school we close. That’s one of the ways we make things work,” he said.

Nodine said that over the past decade, the district has lost $136 million from the capital-funding formula set by the Legislature. But after a decade of neglecting repairs, even the additional $180 million won’t solve the problem. He estimates the district’s real capital needs at $450 million.

Finally, $45 million would go toward renovating classrooms, labs and common areas, including technology infrastructure, like power outlets and wiring.

Although the bond, which will be on the ballot as Proposition 458, has the support of many in the education and business communities, it got off to a rocky start with the TUSD Governing Board.

While all five board members said the district absolutely needs the additional funding, they were predictably divided on whether to call a bond election this year when the question came up in June.

All five do say that now that as it’s on the ballot, they’re voting for it and urging others to do the same.

Mark Stegeman, the board’s fiscal hawk, voted against putting the issue on the ballot this year along with board member Rachael Sedgwick. Stegeman said he opposed the bond because the cost of doing it in an off-election year is greater and because he thought the bond would have a better shot at passing in a 2018 election, after more time to lay the groundwork.

But since losing that vote in June, Stegeman now says he’ll support the bond, and he’s urging others to do the same.

He noted that the $180 million bond package is the smallest of several the board considered and will fund only the most necessary improvements.

“It’s critical facility needs. There’s not much fluff in this,” he said.

A vote on a bond is often viewed as a referendum on the district, its administrators and its Governing Board, said Paul Ulan, a consultant who is working on TUSD’s bond campaign.

And the public is wary of TUSD.

A poll conducted by Ulan’s company, Primary Consultants, shows almost half of the respondents thought TUSD is on the “wrong track,” while 21 percent said it was going in the right direction. Asked whether TUSD is using money in a responsible manner, 45 percent said “no,” while 31 percent said “yes.”

But that poll also found that 84 percent of homeowners agree having quality schools will enhance their property values, and 62 percent said their property taxes are either about right or too low.

Most encouraging to Ulan, 84 percent of those surveyed said they wouldn’t mind paying a few dollars more per month in taxes as long as the money is used to make education better for kids.

The district is attempting to quell public distrust in the Governing Board by setting up a separate bond oversight committee, which would study, vet and review any bond spending.

The district also employed an oversight committee in its last successful bond back in 2004, and Stegeman, who worked with that committee in his early years on the board, said it provided the public with a sense of security that someone other than the Governing Board was ensuring the money wasn’t wasted.

“The committee worked well both in an accounting sense and in deciding priorities,” he said.

Walter Douglas Elementary School, a small K-6 school in the Flowing Wells Unified School District, is famous for its architecture. The campus is dotted with funky 1960’s-era buildings shaped like melted flying saucers or wrinkled sombreros.

But almost from its conception, the school’s avante-garde design has posed problems for those trying to teach, work or learn in the buildings — and now, after more than a half-century, the district wants to tear those buildings down and replace them with new classrooms designed for the 21st century.

That proposal is at the heart of the district’s $24 million bond plan, which will appear on the November ballot as Proposition 455, and accounts for more than half of the proposed spending.

Flowing Wells Superintendent David Baker said the improvements would go a long way toward making up for the capital funding the district has lost from the state in the past decade.

Additionally, the money would be used to replace several school buses that don’t have air conditioning.

Walter Douglas was built as a kind of experimental campus that designated each building as an open, multi-classroom pod designed to house four or five classrooms.

“That only worked for a few years, and they said that wasn’t a great experience,” recounted Tamára McAllister, the school’s principal.

Since then, the school has been outfitted with walls to section off the different classrooms. Sometime around the 1980s, the school added air conditioners to the buildings. But because the buildings weren’t originally designed for centralized cooling, the ducts are loud and exposed in several areas, or they’re covered by low-hanging ceilings most teachers can touch.

Wires drape over whiteboards and hang from walls since the school wasn’t designed with things like computer cords or fiber-optic cables in mind. Welders had to fabricate metal arms to hold up projectors since they can’t be mounted to the uneven, wavy roofs.

The cafeteria, which feeds 600 students daily, doesn’t look big enough to host a child’s birthday party. The school feeds students in seven shifts per day, over a course of two hours. And even then, half the students have to sit outside under a ramada for lunch.

Forty percent of the district's "critical" needs are related to heating and cooling systems.

The move would benefit students and the district.

Grimaldi's Pizzeria closing this weekend after a decade in Tucson

See who's financially supporting the efforts for and against the sales tax.

Some Arizona schools received excess special education funds, while others were shorted.

Tucson Unified School District Superintendent Gabriel Trujillo said he will propose a plan to the governing board that would cost the district about $300,000.

Low ceilings and jury-rigged technology are problems at Walter Douglas Elementary, where Allison Dewey works on Halloween costumes for teachers.

Air-conditioning duct work can be seen hanging from the ceiling in one of the classroom pods at Walter Douglas Elementary School, 3302 Flowing Wells Road on October 06, 2017.