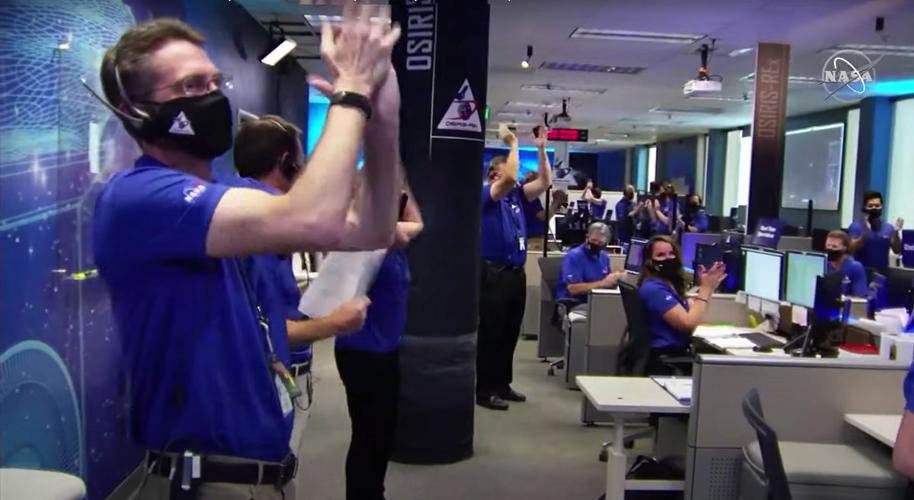 The OSIRIS-REx team at mission control in Littleton, Colorado, cheers after the announcement of a successful touch-and-go maneuver by the spacecraft on the asteroid Bennu. Team members from the UA were in Colorado for the event. 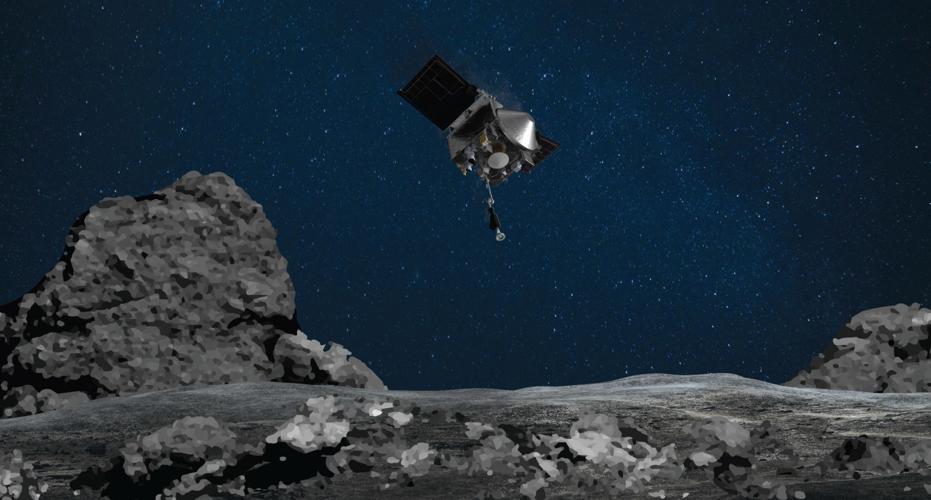 A computer rendering shows OSIRIS-REx preparing to touch down on Bennu. The unmanned craft the size of a passenger van had to touch down in an area no larger than a tennis court. 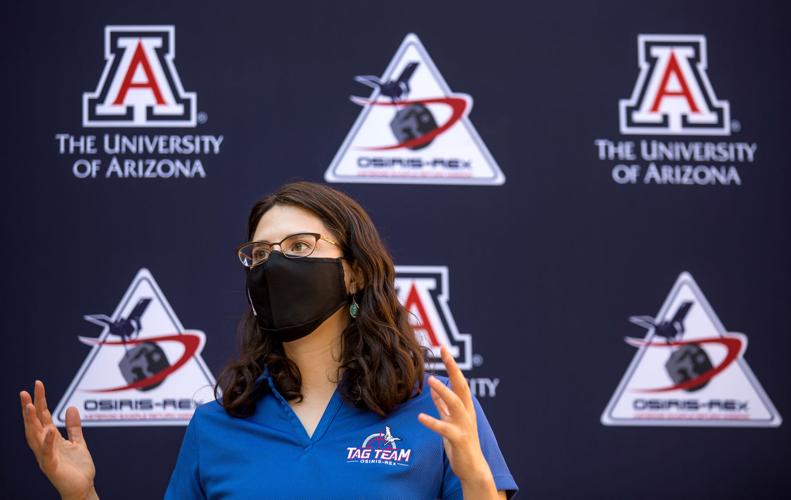 Dani DellaGiustina, lead scientist with OSIRIS-REx’s Image Processing Team, on the craft’s touchdown: “It looks like everything went exactly according to plan.”

A space probe with Tucson roots scratched the surface of a distant world on Tuesday, but it didn’t linger there for long.

The University of Arizona-led OSIRIS-REx mission made contact with the asteroid Bennu for about 4.7 seconds, roughly half as long as it took Neil Armstrong to announce his “one small step for man, one giant leap for mankind” in 1969.

Tuesday’s long-awaited touchdown came at about 3:11 p.m. Tucson time and was broadcast live by NASA from the mission’s operation center at Lockheed Martin, in the Denver suburb of Littleton, Colorado.

Team members from the UA, Lockheed Martin and NASA’s Goddard Space Flight Center broke into cheers when they got word that the spacecraft had completed the delicate and dangerous rock-sampling maneuver.

Based on preliminary data beamed back to Earth from more than 207 million miles away, mission team members know the spacecraft touched the surface, went through the collection process and safely maneuvered back into orbit. What they don’t yet know is whether OSIRIS-REx succeeded in gathering any rocks and dirt from the asteroid.

Their first clue should come Wednesday, Oct. 21, as the spacecraft transmits video footage from the touch-and-go on Bennu.

Over the next week, the team will use the probe’s cameras to visually inspect the sampling arm for telltale signs of dust. Then they will direct the spacecraft to perform a spin maneuver that should tell them the approximate mass of the material collected.

If Tuesday’s sampling run failed to collect enough stuff, the team could try again at a different location on the spinning asteroid roughly one-third of a mile wide.

The mission’s goal is to return with at least 2 ounces of minerals left over from the formation of the solar system 4.5 billion years ago, but the team is hoping to bring back considerably more dirt to play with. The spacecraft can hold over 4 pounds of samples, enough to fuel countless discoveries about the formation of the planets and the origins of life on Earth.

She said she can’t wait to see what UA researchers might learn from the asteroid samples due to arrive back on Earth in September 2023.

“We’re going to have decades of science out of this,” she said. “These kinds of events change the way we understand the world we live in.”

A lot could have gone wrong on Tuesday.

To reach the designated sampling site, the unmanned craft the size of a passenger van had to steer past boulders the size of buildings and into a rock-strewn crater to touch down in an area no larger than a tennis court.

Contact was made by the craft’s 11-foot sampling arm, which is equipped with a collection disc designed to linger on the surface just long enough to gather small particles of dust and rock stirred up by a blast of compressed nitrogen gas.

Because of the 18-minute communication delay between the Earth and Bennu, the mission team could only watch and wait as the spacecraft guided itself through the descent, touchdown and return to orbit using a sequence of commands uploaded into its computer in advance.

The spacecraft appears to have kissed the surface within about 3 feet of its intended target, said Dani DellaGiustina, lead scientist with OSIRIS-REx’s Image Processing Team.

“So that’s incredible,” she said. “It looks like everything went exactly according to plan.”

Sara Knutson, lead engineer for the mission’s science operations team, said she woke up Tuesday feeling calm and confident, but her nerves started to kick in as the spacecraft descended to within about 100 meters of the surface.

As it turned out, she had nothing to worry about. “My instincts were right. It went great,” she said.

Knutson and DellaGiustina were part of the local contingent of team members who monitored the touch-and-go from the UA’s Drake Building, which is named for Michael Drake, the former director of the university’s Lunar and Planetary Lab and the original principal investigator for the OSIRIS-REx mission.

Drake died in 2011, six months after NASA awarded the UA an $803 million contract to bring back asteroid samples.

Lauretta had his late friend and mentor on his mind in the moments leading up to the spacecraft’s historic brush with Bennu.

“I miss him. I wish he was here today,” Lauretta said of Drake from the mission’s operation center in Colorado. “I know he’d be really proud of us.”

Weird video of Earth’s rotation from a new perspective

The University of Arizona-led OSIRIS-REx mission completed a "flawless" final rehearsal on Tuesday, clearing the way for the real thing on Oct. 20: scooping samples from the surface of the distant asteroid Bennu.

New research by a University of Arizona-led team suggests two near-Earth asteroids — but Bennu and Ryugu — were actually sheared off and shaped by a by a single crash.

The maneuver will bring the unmanned probe to within about 2.3 miles of the mountain-sized space rock on Wednesday, April 7.

The OSIRIS-REx team at mission control in Littleton, Colorado, cheers after the announcement of a successful touch-and-go maneuver by the spacecraft on the asteroid Bennu. Team members from the UA were in Colorado for the event.

A computer rendering shows OSIRIS-REx preparing to touch down on Bennu. The unmanned craft the size of a passenger van had to touch down in an area no larger than a tennis court.

Dani DellaGiustina, lead scientist with OSIRIS-REx’s Image Processing Team, on the craft’s touchdown: “It looks like everything went exactly according to plan.”