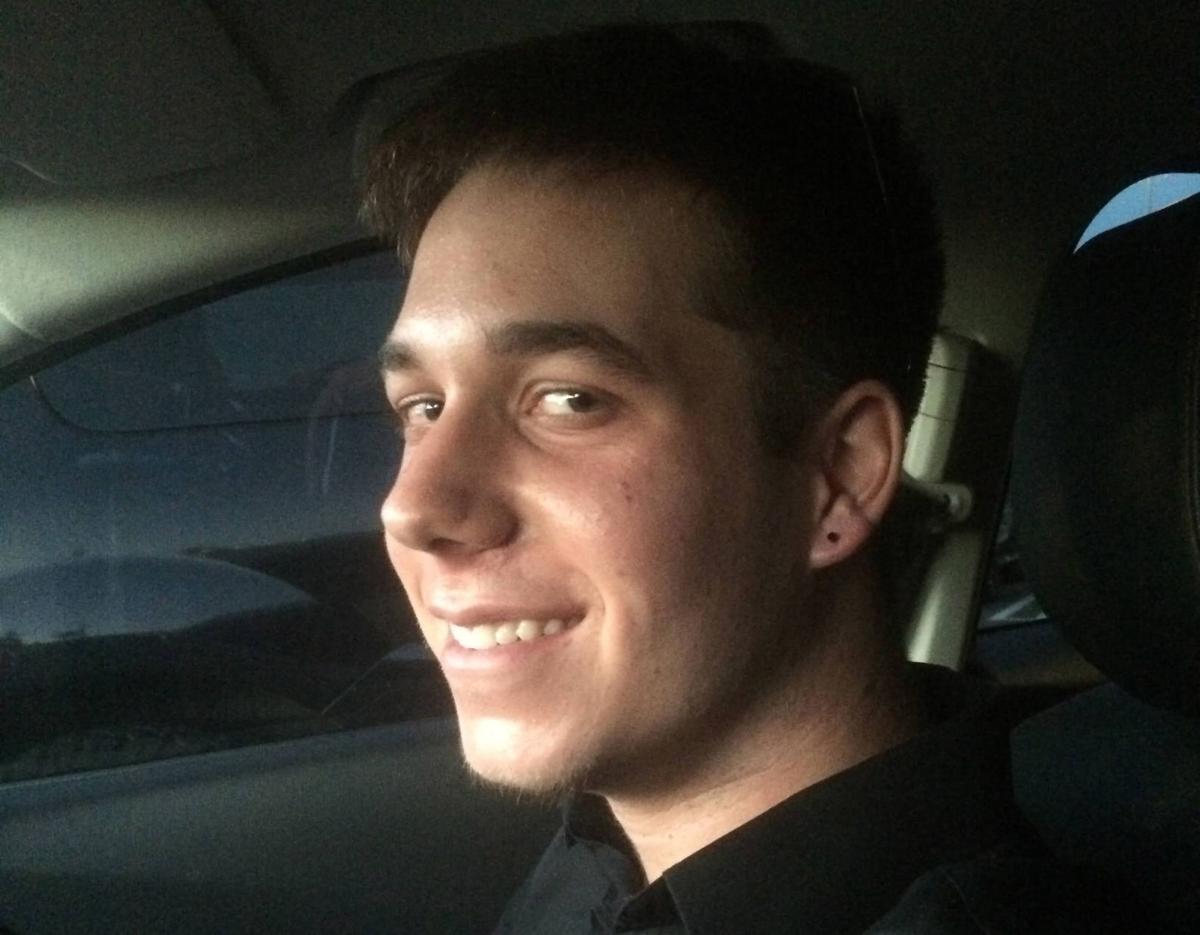 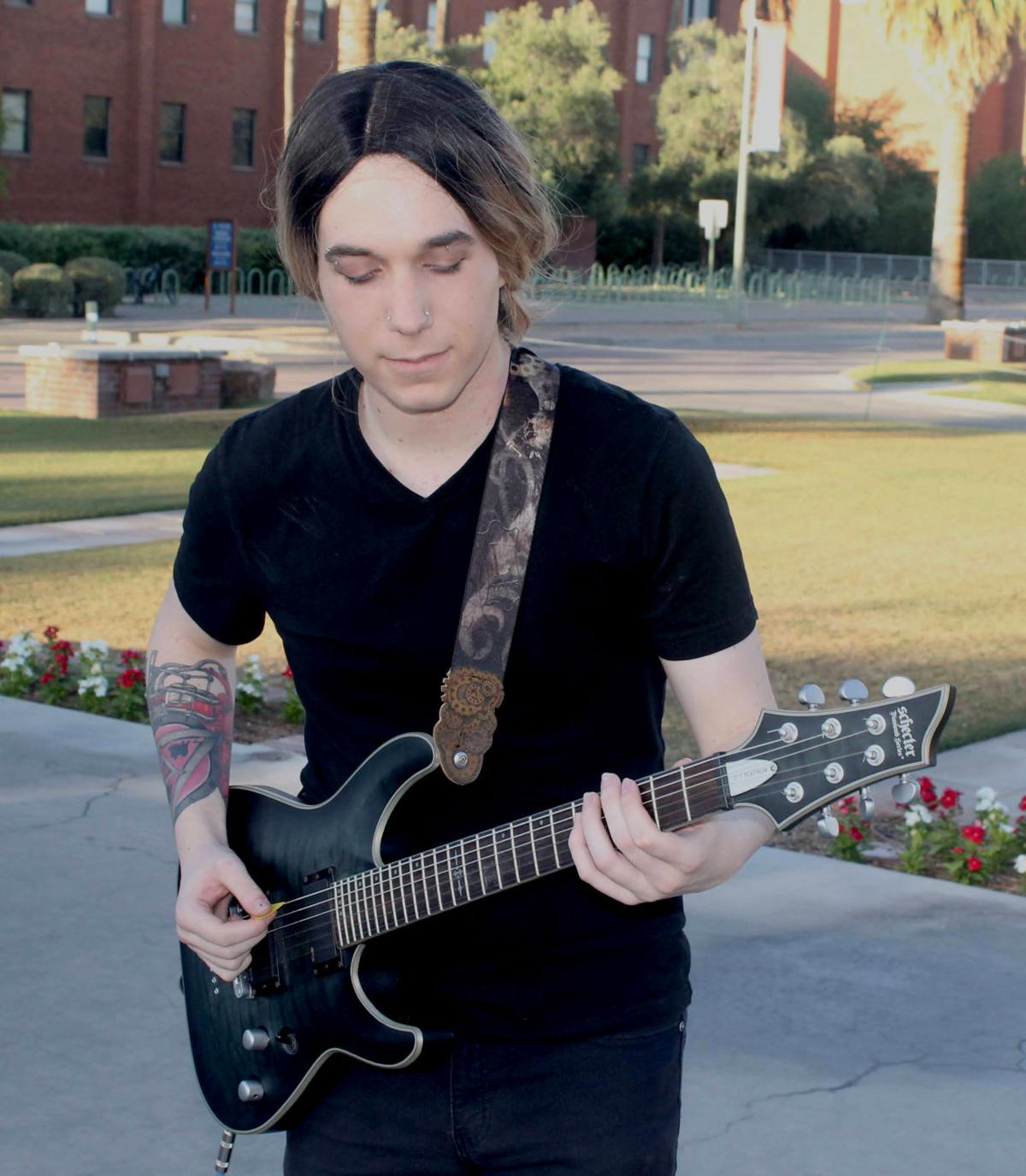 Alex Sanov appeared to be doing well after his recent five-day stay at Palo Verde psychiatric hospital, said his father. 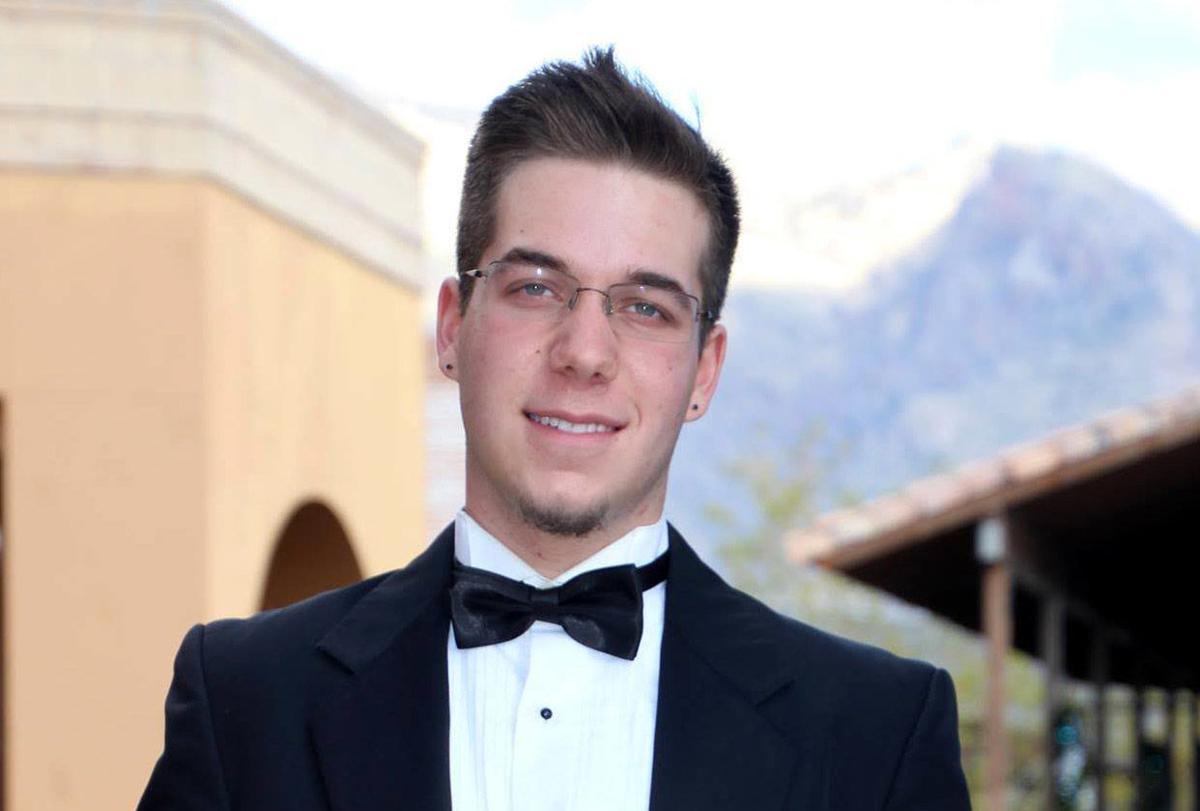 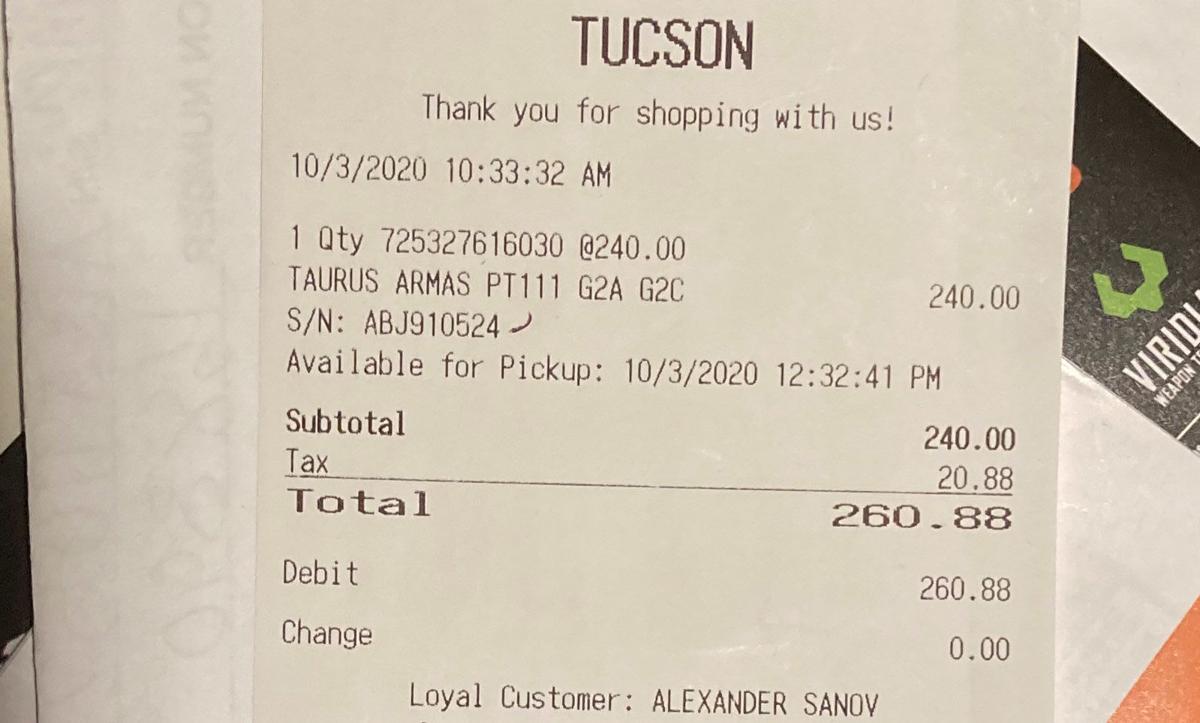 Receipt for a handgun purchased by Alexandor Sanov on Oct. 3, 2020.

Editor’s note: The American Foundation for Suicide Prevention has guidelines for journalists who report on suicide to avoid triggering readers who may be suicidal — guidelines the Arizona Daily Star followed closely in preparing this article. If you experience suicidal feelings after reading it, contact the National Suicide Prevention Lifeline around the clock by calling 1-800-273-8255 or texting TALK to 741741 to connect with a trained crisis counselor.

At a rest stop on a highway north of Tucson, Alex Sanov made his loved ones members of a club no one wants to join.

Nine days after he was released from a psychiatric hospital — a stay that had seemed to do him a world of good – the 21-year-old University of Arizona student walked into a midtown gun store and walked out with the firearm he would use to kill himself.

Stopping at his nearby apartment on Oct. 3, he left the receipt for his $260 purchase on the kitchen table, then took his final drive.

An hour later, his short life was over.

Parents and friends believe Sanov, a 2017 graduate of Catalina Foothills High School, might have been saved were it not for an Arizona gun law that permits the same-day purchase of firearms.

All that’s required at a licensed gun dealer is a federal background check, which Sanov would have passed because he had no criminal history and had never been involuntarily committed for treatment. Instead, he willingly sought psychiatric care.

“He was a kind, intelligent and very loved man, and his life was cut short by an event that had the potential to be prevented,” said UA student Claire LeWallen, 21, Sanov’s close friend since their days in a high school marching band.

Eighteen states bar same-day sales of some or all types of firearms, either by having a specified waiting period or by having permit approval process that achieves the same thing, according to Giffords, the gun safety organization led by former U.S. Rep. Gabrielle Giffords, who was shot in the head during a mass shooting in Tucson in 2011. Waiting periods generally range from three to seven days, although Hawaii has a 14-day waiting period.

It’s a measure that can prevent some gun suicides, according to the limited amount of research that exists to date.

In Arizona — rated the gun-friendliest state in America the last eight years in a row by Guns & Ammo magazine — it’s a change the Legislature has never considered.

The state’s reputation as a gun lovers’ paradise is due in large part to a group co-founded in Tucson and devoted to keeping new gun safety laws off the books.

One of its founders predicts a waiting period for gun purchase will never be adopted in Arizona.

Lives lost to suicide are not as important as the public’s right to purchase firearms promptly, said Charles Heller, co-founder and spokesman for the Arizona Citizens Defense League, for years the most influential gun rights voice at the state Capitol.

“You don’t say, ‘Well, a few more people might kill themselves so we’re going to infringe everybody else’s rights,’” said Heller, an AM radio talk show host who often talks about the right to bear arms.

“If somebody kills themself, that’s their choice,” he said — although experts say rational thinking is impaired during a suicide attempt.

The American Foundation for Suicide Prevention says suicide “is related to brain functions that affect decision-making and behavioral control, making it difficult for people to find positive solutions.”

Heller’s group, founded in 2005, claims 63 legislative victories in the last 15 years that expanded the use and availability of firearms or prevented proposed new restrictions from becoming law.

In recent years, for example, the group’s website says it successfully fought a proposed purchase limit of one gun a month, a proposed civil fine for unsafe firearms storage and a proposed ban on bump stocks that can turn regular guns into the equivalent of machine guns — the same device a man used to shoot hundreds of people at a Las Vegas country music festival in 2017.

Heller said his gun group’s top achievement was a change that made Arizona one of 15 states where anyone old enough to legally buy a firearm can carry it around in public, loaded and concealed, without a permit.

Heller said the gun industry is making an effort to combat the suicide problem.

In 2017 the National Shooting Sports Foundation, a firearm industry trade association, developed a suicide prevention kit for gun retailers and shooting ranges to help their staffs better identify customers at risk and point them to suicide prevention resources.

It isn’t clear if such measures were in effect at the Tucson gun store where Sanov made his Oct. 3 purchase. A store manager would not comment.

A poll last year by the Pew Research Center found an 8 percentage-point increase in public support from 2017 to 2019, a period when high-profile mass shootings occurred at Walmart in El Paso, a synagogue in Pittsburgh, and a high school in Parkland, Florida, as well as in Las Vegas.

“The share of Democrats who support stricter gun laws has risen 11 percentage points since 2017, while there has been 7-point increase in support among Republicans,” the Pew Center found.

As a child, Sanov was happy and outgoing and attended a gifted program from first to fourth grade at Lineweaver Elementary School, said his mother, Nina Primm.

But by sixth grade, he was seeing a therapist for severe depression and anxiety.

Years of doctor visits and medications followed, with varying degrees of long-term effectiveness. Diagnoses were changed, most recently to bipolar illness, his mother said.

LeWallen, Sanov’s high school friend, said he “seemed like a happy, fun guy, always joking around and trying to make people laugh,” — a tendency she thinks he developed to mask his feelings of sadness.

In private, she said, Sanov berated himself for being depressed despite his advantages in life such as caring parents and the chance for a university education.

“He knew he was fortunate,” she said. “And that made him feel even worse.”

Primm said her son, despite his challenges, had a generous spirit. She pointed to his decision, at age 17, to register as an organ donor when he got his driver’s license.

Four people in need of transplants received Sanov’s organs, his parents said — the one small comfort they take as they grieve their loss.

“He seemed to be fine; he was really upbeat,” said the elder Sanov, who called his son’s death “incomprehensible.”

“What really hurts is that, as a child, he always hated guns,” he added.

Last year, 253 people killed themselves in Pima County. Like Sanov, many were young men who used a firearm, according to the Pima County Medical Examiner.

Nationwide, more than 24,000 people died in gun suicides in 2018, the most recent federal data available from the National Center for Health Statistics. Suicide by any means was the second-leading cause of death in America — after accidents — among 10- to 34-year-olds in 2018, data from the National Institute of Mental Health show.

Until recently, little research was done on gun violence because the federal government didn’t fund it, experts say.

“Scientific progress in understanding how to address this problem has been limited in part because of limited research funding, which itself is largely due to the politics around guns in America,” University of Chicago professor Jens Ludwig, who has published studies on the economic costs of gun violence, wrote in a 2017 article in the Proceedings of the National Academy of Sciences.

One 2017 research study found gun murders fell by 17% and suicide rates by 7% to 11% in states with cooling-off periods for firearms purchase. Another study that year found a smaller decrease of 2% to 5%.

The causes of suicide are complex and often not due to a single factor, researchers say.

About 90% of people who try to kill themselves by means other than guns survive the attempt — either because they reconsider or someone intervened — and don’t try it again, studies show.

“Most attempts are not fatal, and most people who attempt suicide do not go on to die in a future suicide,” said a 2020 study by Stanford University’s school of medicine.

But attempts made using a gun are nearly always fatal.

“Whether a suicide attempt is fatal depends heavily on the lethality of the method used — and firearms are extremely lethal,” said the Stanford report, which also detected a “dramatically elevated risk of suicide” for gun owners in general, especially women.

Dr. Randall Friese, the UA trauma surgeon who operated on Giffords and other victims of the 2011 mass-shooting, was elected to the Legislature in 2014, a job he says he sought in large part to push for improved gun safety.

So far, it’s been an uphill battle, but there are signs that may be starting to change, the District 9 representative said.

Friese described the Arizona Citizens Defense League as “a small, very vocal group of people” that has “carried a lot of clout,” in the state’s Republican-dominated Legislature. Heller, the co-founder, said the gun group has 18,000 paying members and hires two lobbyists to interact with lawmakers.

Friese said the lobbyists often manage to squelch gun safety proposals before they reach the hearing stage, which prevents public debate and spares legislators from having to take positions on potentially controversial measures.

But last year, Friese said something happened that surprised him.

When a Republican legislator proposed making it legal to carry a loaded gun on school grounds, even some fellow Republicans balked and turned it down, he said.

He predicts gun safety laws will be strengthened little by little.

“If I didn’t have hope, I wouldn’t keep coming back,” Friese said.

“We are like water dripping on a rock,” he said of the gun safety movement.

“It’s going to take time, but we will eventually effect change.”

How to get help

Where to get help

If you have thoughts of suicide

In the Tucson area:

Also, the American Foundation for Suicide Prevention has many resources available on its website, afsp.org including how to help someone at risk, support groups, what to say to a survivor of a suicide loss and finding a mental-health provider.

These are some common warning signs that someone may be considering suicide.

If a person talks about:

Behaviors that may signal risk

People who are considering suicide often display one or more of the following moods:

Photos: Remembering Robin Williams on the 6th anniversary of his death

Alex Sanov, 21, died of a self-inflicted gunshot wound in 2020. He was an organ donor. The Donor Network of Arizona prepared a short video to …

Suspect is recovering from his wounds at Tucson hospital.

Police say vehicle went up onto sidewalk and struck two women. One died at scene, other was taken to hospital in serious condition.

Alcohol may have been a factor in the crash, police say.

Tucson police: One man killed, one injured in shooting

A man crossing a busy street after dark on Tucson’s south side was struck and killed by a car Monday, police said.

Alex Sanov appeared to be doing well after his recent five-day stay at Palo Verde psychiatric hospital, said his father.

Receipt for a handgun purchased by Alexandor Sanov on Oct. 3, 2020.