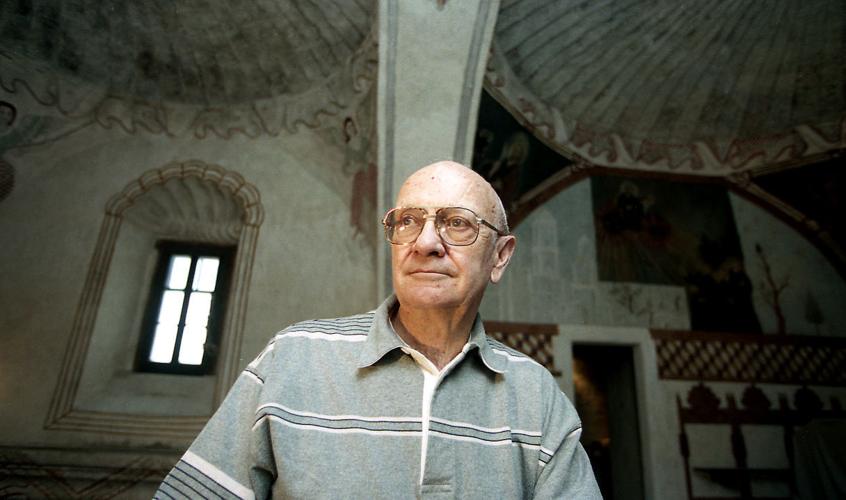 Bernard “Bunny” Fontana at Mission San Xavier del Bac, a site he dedicated much of his life to researching and helping restore. 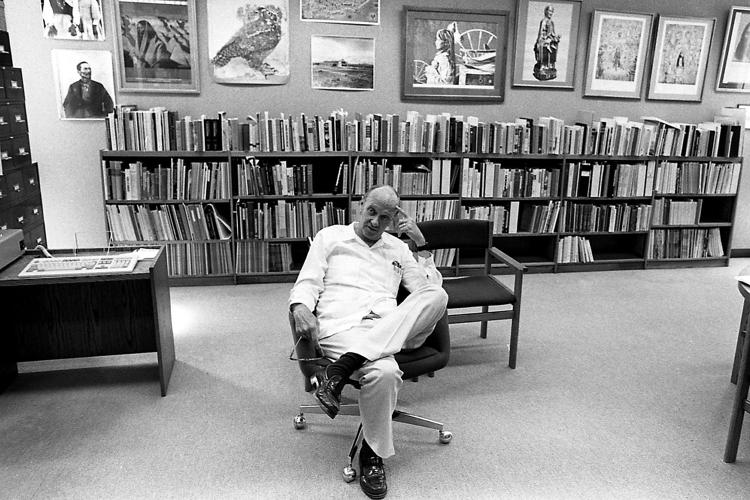 “Bunny” Fontana in his office at the UA’s Main Library in 1990. Fontana received his doctorate from the UA in 1960, and helped found the Southwestern Mission Research Center at the university in 1965. He retired from the UA in 1992. 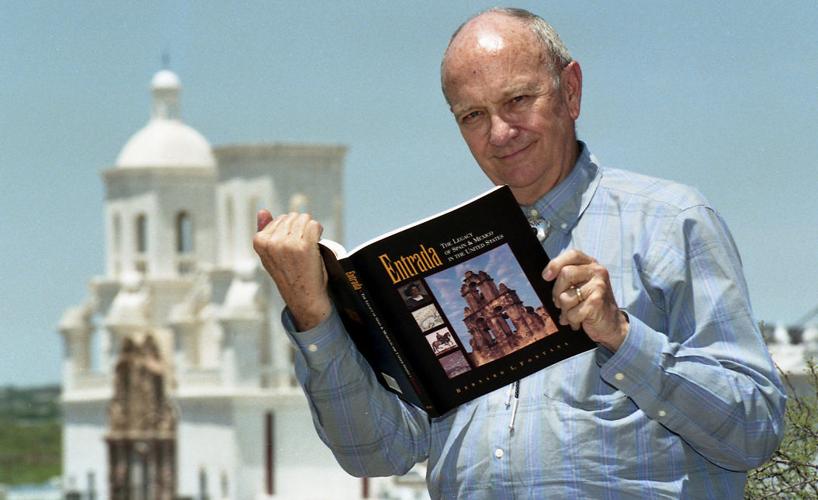 Fontana holds a copy of his book “Entrada: The Legacy of Spain and Mexico in the United States” in 1994. He was a prolific author, with his final book being published in 2015.

Bernard “Bunny” Fontana, a renowned scholar and prolific author in the field of Southwestern history and archaeology, died early Saturday. He was 85 years old.

He helped create the Southwestern Mission Research Center at the University of Arizona in 1965 to support borderlands research and education. That led Fontana and others, beginning in 1974, to organize tours of Spanish colonial missions in Sonora, Mexico, following the Pimería Alta trail of Jesuit missionary explorer Eusebio Francisco Kino.

Fontana wrote vibrant histories of the indigenous populations of the Southwest, including the Tohono O’odham in Arizona and Sonora and the Tarahumara in Chihuahua, Mexico, and he was the leading expert on Mission San Xavier.

“I can’t comprehend a Tucson without him. He’s been a voice for the history and the culture of the area for so long,” said noted UA anthropologist Thomas E. Sheridan, a longtime friend and colleague.

Anthropologist and folklorist Jim Griffith, a one-time student of Fontana and a next-door neighbor, said his mentor “had a tremendous effect on anyone in this part of the world who’s interested in history, interaction between cultures and anthropology. On top of that, he was a person of great charm.”

Fontana, a humble and humorous man, was generous with his time and research with other scholars, students, journalists and the public.

Sheridan said, “He not only published for scholars and the informed public. … He was always thinking of a bigger audience, rather than thinking of an academic audience.” Sheridan called Fontana, who was on his doctoral dissertation committee, the “go-to guy” on everything related to the Mission and the Tohono O’odham.

Fontana told the Arizona Daily Star for a 1990 profile that he wanted to be remembered as “a good father to my children. Otherwise, it doesn’t really matter to me whether I’m remembered or not.”

In 1960, Fontana received a doctorate in anthropology from the University of Arizona. He spent 30 years at the UA in roles including field historian with the library, ethnologist in the Arizona State Museum and lecturer in the department of anthropology. He retired from the UA in 1992, but continued to write and research tirelessly.

Because of his work on the O’odham and his residence adjacent to the San Xavier Reservation, he was in a unique position, said Ofelia Zepeda, a UA Regents Professor of linguistics and American Indian studies, and also a Tohono O’odham.

The O’odham at San Xavier were his friends and neighbors, and he was very respectful of them, she added.

“He was such a friendly, open person,” Zepeda said.“People were willing to share their stories and history with him.”

Born in 1931 in Oakland, California, Fontana grew up in Yuba City, where he developed an interest in the Maidu indigenous people. His career in anthropology began with an elective course at the University of California at Berkeley. Fontana realized the subject, which became his undergraduate major, touched on his lifelong interests: people, along with natural and cultural history.

“It turned out that all the things that interested me as a child were encompassed by that rubric of anthropology,” he told the Star.

After college, while stationed at a U.S. Army post in Alaska, he married his high school sweetheart, Hazel Ann McFeely. While there, he met an anthropologist who suggested he consider graduate school at the University of Arizona.

So in 1955, Fontana and his wife moved to an adobe home just outside the reservation so he could attend the UA. There, the family attended Mass at the nearest Catholic church: Mission San Xavier del Bac.

The next year, Fontana decided to focus his research on the neighboring indigenous community — then known as the Papago Indians — living on the San Xavier Reservation, part of the Tohono O’odham Nation.

“To do so would require a knowledge of previous research concerning Papagos, and the compilation of an annotated bibliography seemed to be a good way to begin,” Fontana wrote in the 2004 introduction to the bibliography.

The work is likely the most comprehensive compilation of research and first-person accounts related to the Papago people. The scope of the bibliography also included work related to Mission San Xavier, which he described as “one of North America’s great architectural and art treasures.”

Throughout his career, Fontana collected everything he could find in print about the O’odham people and amassed an extensive collection at his home.

In the 1950s, along with fellow graduate student Bill Robinson, Fontana excavated west of the San Xavier Mission and discovered the foundation of the first church built at San Xavier in 1757. Construction of the current church began about 1783.

Starting in the late 1980s, Fontana advocated for and then organized a five-year restoration of the mission, weathered by two centuries of water and sun damage, graffiti and faulty earlier restorations. Fontana brought in international experts on art conservation to head up the interior restoration.

“We decided that if we were going to do this, why not go for the very best people in the world?” Fontana told the Star in April 1990.

The work needed “is not an overnight emergency we’re dealing with. But if something isn’t done, the damage will be irreversible,” Fontana said. Restoration and maintenance of the church continues to this day under the guidance of the Patronato group he helped found.

Fontana’s personal ties to the church were even stronger than his professional ones: His three children were baptized and later married at the mission, and the funerals of one of his sons and his wife were held there, the Star reported in 2010.

He was preceded in death by his wife, who died in 2009, and their son, Geoffrey Earl Francis, who died in 2000. He is survived by his son, Nicholas Anthony Fontana, and his daughter, Francesca Ann Fontana.

He devoted 10 years to painstakingly cataloging the Christian art at Mission San Xavier with photographer Edward McCain. The resulting 9-pound, 376-page work, “A Gift of Angels: The Art of Mission San Xavier del Bac,” was published by the University of Arizona Press in 2010.

“What I’m hoping,” Fontana said then, “is it’ll awaken other people that we have a real treasure here that transcends place.”

When the Star asked about a turning point in his life, he said, “Being born. I don’t think there really are such things as turning points. Life is a series of little twists and turns, and mine has been blessed by a lot of continuity.”

A memorial service will be held Friday at San Xavier at 10 a.m., followed by a reception in the mission patio.

1973 "Mission San Xavier del Bac: A Photographic Essay on the Desert People and Their Church." Photographs by Helga Teiwes-French. Tucson, The University of Arizona Press.

1979 "The Material World of the Tarahumara." Photographs by Helga Teiwes. Tucson, Arizona State Museum, The University of Arizona.

1979 "Tarahumara: Where Night Is the Day of the Moon." Photographs by John P. Schaefer. Flagstaff, Arizona, Northland Press.

1986 [with Clifton B. Kroeber] "Massacre on the Gila: An Account of the Last Major Battle between American Indians, with Reflections on the Origin of War." Tucson, The University of Arizona Press.

1994 "Entrada: The Legacy of Spain and Mexico in the United States." Tucson, Southwest Parks and Monuments Association; Albuquerque, University of New Mexico Press.

2010 "A Gift of Angels: The Art of Mission San Xavier del Bac." Photography by Edward McCain. Tucson, The University of Arizona Press.

Tucson historian shares his love of state's past

For 30 years, he has made Arizona's history accessible.

"The church has withstood earthquakes and lightening strikes, we'll get over this," Rev. Edward Sarrazin says.

Despite assurances, still no recent data on medicated foster kids

AHCCCS officials say an updated study is in the works.

"If it weren't for him, I don't think people would know who we are today," says Jacelle Ramon-Sauberan, a UA grad student.

"As locals and lovers of San Xavier, it's our responsibility."

Anyone who has remodeled an old house has made unexpected discoveries.

The trips came to a halt over fears of insecurity in Sonora.

Views from the top of the San Xavier Mission

A peek behind the scenes of the restoration work being done on original brick work in the east bell tower at San Xavier Mission in Tucson. The…

Inside Dubai center where sick turtles recover before returning to sea

More than 2.2 million people in the U.S. live without running water and basic indoor plumbing

More than 2.2 million people in the U.S. live without running water and basic indoor plumbing

Bernard “Bunny” Fontana at Mission San Xavier del Bac, a site he dedicated much of his life to researching and helping restore.

“Bunny” Fontana in his office at the UA’s Main Library in 1990. Fontana received his doctorate from the UA in 1960, and helped found the Southwestern Mission Research Center at the university in 1965. He retired from the UA in 1992.

Fontana holds a copy of his book “Entrada: The Legacy of Spain and Mexico in the United States” in 1994. He was a prolific author, with his final book being published in 2015.