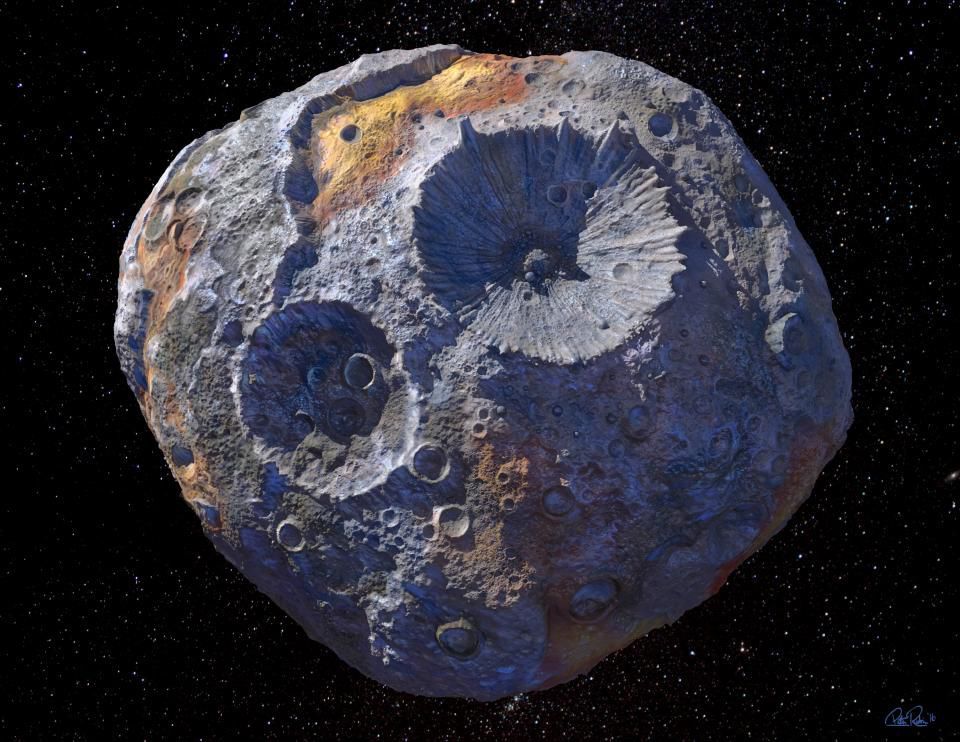 ASU will lead the Discovery mission to Psyche, believed to be the solid metal core of a planet that never fully formed. 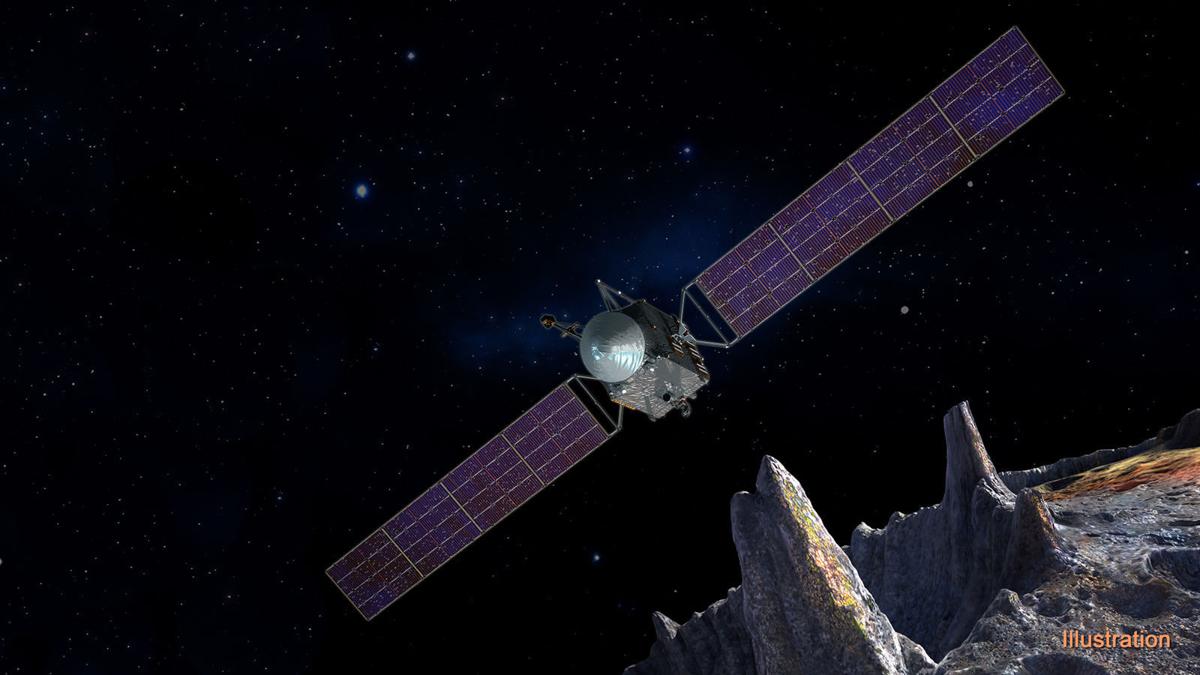 Artist’s conception of the Psyche spacecraft at the asteroid’s surface. The Psyche mission is slated to launch in 2023.

Lindy Elkins-Tanton took the helm of Arizona State University’s School of Earth and Space Exploration in 2014 and put in a bid for the school to lead a NASA mission.

This month, NASA chose ASU to lead that $450-million Discovery mission to the metallic asteroid Psyche. ASU will also build a critical instrument for the robotic spacecraft and has a role in a second NASA mission announced last week.

It’s big news for ASU and the 10-year-old school, which is leading its first NASA mission. It’s also a rarity in space-science circles, where the odds of landing a NASA mission on the first try are, well, astronomical.

“It’s kind of outrageous,” Elkins-Tanton said in a telephone interview, then quickly noted she has been personally working on the science behind the mission for more than five years and she now heads a school that already serves as mission control for two NASA space-based instruments.

But, as she wrote on the Psyche Facebook page the day the selection was announced: “We worked a paltry five and a half years. Other teams have gone through this process twice, three times.”

The Psyche mission, combined with the University of Arizona-led OSIRIS-REx sample-return mission, makes Arizona a hub for asteroid exploration, she said.

She also envisions the two universities, along with NAU and Lowell Observatory transforming the state into “the aerospace capital of the world.”

The Discovery program is a competition for “small” missions, capped at $450 million. Finalists for the current round of awards included two missions to Venus and a bid to launch an infrared space telescope to look for near-Earth objects.

The telescope, called NEOCam, was not selected, but NASA continued funding for its further development.

At a NASA Small Bodies Assessment Group meeting in Tucson last week, a NASA official congratulated the group of asteroid and comet researchers from across the country for “running the table” in the latest announcement of NASA Discovery program awards.

In addition to Psyche, NASA selected the Lucy mission, which will provide the first close look at six “Trojan” asteroids that are caught in Jupiter’s orbit, leading or following the giant planet in its long orbit around the sun.

That mission, led by Hal Levison of the Southwest Research Institute in Boulder, Colorado, will visit six “unique” bodies, — “unique, in that we know nothing about them,” Levinson told the small-bodies group on Thursday.

In addition, said Levinson, each one of the six asteroids has a different size, shape and composition.

Psyche, meanwhile, is not just unique, but “highly improbable” — the only one found by astronomers that is almost totally metallic in content. “It is a new type of world, not rock or ice, but metal,” said Elkins-Tanton, who reported to the group Thursday via video-conference call.

She said the team’s “strong, testable hypothesis” is that Psyche is the metal core of a forming planet whose rocky crust was stripped away in a series of cataclysmic collisions with other bodies. It would have taken six or seven such collisions to reveal the core, she said, something that is a rarity in models of planet formation.

She said the asteroid’s composition answers criticisms she’s heard of visiting yet another small body: “Why are we going to see more asteroids? Aren’t we just stamp collecting? We’re not just stamp-collecting. This is is the only way we’re ever going to see a core.”

“You guys can kind of feel you’ve cleared the table on Discovery missions, but don’t gloat around your Venus colleagues.” NASA Planetary Defense Officer Lindley Johnson told the small-bodies group on Thursday. Johnson heads the NASA effort to discover and mitigate the threat composed by near-Earth objects.

Jim Green, director of NASA’s Planetary Science Division, said NASA has not shifted its emphasis in its competed programs from planets to asteroids and comets. Lucy and Psyche were simply the two best proposals in the current round, he said. “It’s a competition. It’s a real shoot-out and it’s incredibly difficult,” he said.

Green said the growth of small-bodies research is part of an evolution in thinking about solar system formation that actually began in Arizona with geologist Eugene Shoemaker’s investigations of Barrington meteor crater in Northern Arizona in the 1960s.

It wasn’t that long ago that astronomers thought the rims and craters on Earth, its moon and elsewhere in the solar system resulted from volcanic activity, he said. Now planetary scientists know those craters resulted form impacts that built moons and planets or blasted them apart.

The Psyche mission, scheduled to launch in 2023 and possibly a year earlier than that, will reach its target by 2030. Psyche, about 130 miles in diameter, resides in the main asteroid belt, about three times Earth’s distance from the sun.

The Psyche spacecraft will orbit its target for a year, using an array of instruments, including a multi-spectral imager being built by an ASU team, to determine the composition of Psyche, believed to be the iron-nickel core of a once-forming planet.

ASU is also building an instrument for the Lucy mission to Jupiter’s trojans. It is a version of a thermal-emission spectrometer that was built by ASU Regent’s Professor Phil Christensen for the OSIRIS-REx mission.

We've collected a few front pages from newspapers.com to give you a look at some January 15 papers in history. With a subscription to newspape…

The University of Arizona's top scientists and promising graduate students will share their knowledge at four venues this spring.

The University of Arizona-operated HiRISE camera took a break from mapping Mars to grab a shot of the planet it left a decade ago.

The University of Arizona's 'pretty super' computers host a variety of research projects.

Tucson has a major piece of the action on giant telescope

Tucson vendors nabbed some weighty chunks of the worldwide competition to supply elements of the next big thing in astronomy.

UA Science: A place of discovery and education

Driver lost control of vehicle, crashing through a construction barricade.

The $1-billion telescope will explore the cosmos from a mountaintop in Chile.

Year's first month was cold and wet (when it wasn't hot and dry). It averaged out.

UA scientists worried about how political climate will affect science

They're concerned about losing their voice in an anti-science era.

In test, UA-led OSIRIS-REx team snaps photos of Jupiter and its moons

As science march nears, questions center on role of scientists

Scientists debate whether to engage in politics or let the facts speak for themselves.

The spacecraft's cameras worked better than expected during its search for asteroids caught in Earth's orbit.

ASU's journey to asteroid Psyche is shortened by 4 years

Trajectory change will cut time and distance to the metallic asteroid — and save $100 million.

ASU will lead the Discovery mission to Psyche, believed to be the solid metal core of a planet that never fully formed.

Artist’s conception of the Psyche spacecraft at the asteroid’s surface. The Psyche mission is slated to launch in 2023.