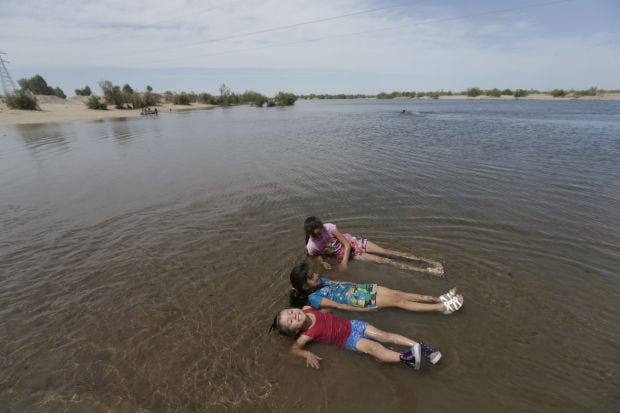 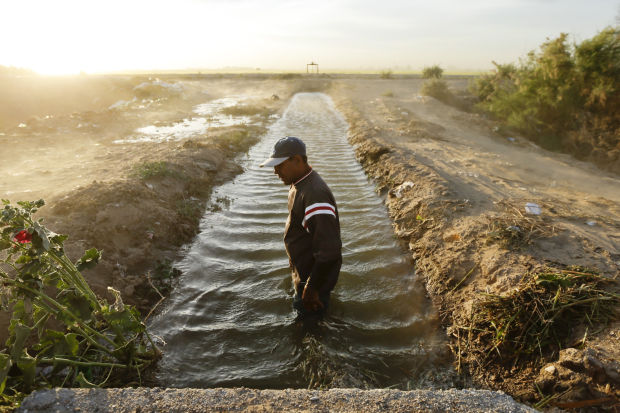 Abelardo Martinez stands in a blocked duct which leads water to his fields near Colonia Coahuila, Mexico. ﻿ 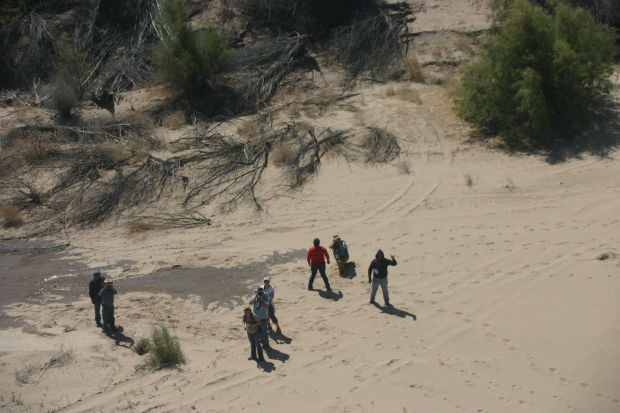 Aerial photos show water creeping into the dry Colorado River Delta close to the Morelos Dam south of Yuma. After its release March 22, high levels of water gushed down the Colorado River for the first time in more than a decade.

ALONG THE RIO COLORADO, Baja California — When high levels of water gushed down the Colorado River last week for the first time in more than a decade, it was a cause for celebration.

But amid the revelry, 83-year-old Saul Diaz couldn’t help but remember how it used to be in the 1950s, when he’d spot beavers on the river. He thought about the time he watched a piece of heavy construction equipment fall into the river — and never reappear.

“It was a lot deeper then than now, 15 feet deep,” said Diaz, who built irrigation canals in Baja back in those days.

This week, even as water returns to the delta through a planned flood, or pulse release, from upstream dams, the river Diaz remembers isn’t likely to return anytime soon.

Once covering 3,300 square miles, this once was one of the world’s richest and most ecologically productive river deltas. Over the centuries, it drew Indian migrants, Spanish explorers, U.S. scientific and commercial expeditions, commercial steamboats, geologists, naturalists, boaters, millions of birds and fish and billions, if not trillions, of tons of sediment.

But water and life-giving sediment was gradually cut off by construction of dams, irrigation canals and other water projects, from the Hoover Dam in the mid-1930s to the Glen Canyon Dam in the mid-1960s. While the delta has bounced up and down since then, by the time the pulse flows started, most of it was barren farm fields and mud flats.

“For hundreds, perhaps thousands, of years, the Cocopah have been known as river people,” began “The Cocopah People,” Anita Alvarez de Williams’ 1974 book about the tribe, which has lived along the river on both sides of the border at least since 700 to 900 A.D.

“During the flood season, they once lived on the high ground in the Colorado River Delta, an environment similar to that of the valley of the lower Nile River in the Old World,” she wrote. “Like ancient Egyptians, the Cocopah practiced a form of agriculture dependent on the floodwaters of the river. As those waters receded, the Cocopah followed after, with long digging sticks and planting seed, moving their camps down, closer to the river, practicing a form of agriculture known to man since his earliest crop-growing times.”

When Spanish explorers arrived starting in the 1500s, the Cocopah gave them corn they grew and mesquite bread they made from large groves on the river’s flood plain, de Williams wrote. The tribe also lived on native salmon and other native fish from the river and its lagoons. They fished with gill nets and arrows, plucking up fish that floated to the surface.

The first European explorer known to travel the delta was Hernando de Alarcon, a Spaniard who was part of Coronado’s expedition into the Southwest, says the 1935 book, “The Colorado River Delta,” by engineer and longtime Delta explorer Godfrey Sykes.

Don Juan de Onate, the Spanish governor of New Mexico, sailed up and crossed the delta in the early 1600s and Father Eusebio Kino did the same in the early 1700s after he established San Xavier Mission near Tucson. Many accounts say Kino went far enough in to determine Baja California was a peninsula and not an island.

In the 1820s, Midwestern fur trapper James Ohio Pattie and his party took eight canoes down the Colorado from its junction with the Gila River. They sometimes brought in as many as 60 beavers in a morning, enough that they needed to build another canoe to carry the load, he wrote in a journal of his trip. When they approached the river’s mouth at the Gulf of California, their camp was inundated by the river, he wrote.

“We landsmen from the interior . . . stood contemplating with astonishment the rush of the tide coming in from the sea, in conflict with the current of the river,” Pattie wrote. “In twenty minutes, the place where we lay asleep, and even our fire place, was three feet under water, and our blankets were afloat.”

Commercial steamboats plied their trade there for decades, carrying freight and passengers from Yuma to the river mouth and, eventually, San Francisco. Colorado steamers carried more than 100 passengers a month at the peak in the 1870s, said the 1978 book “Steamboats on the Colorado River.” That declined and eventually stopped by the 1880s, when the Southern Pacific Railroad line was extended to Yuma.

In 1904, D.T. MacDougal, then director of the New York Botanical Garden and later director of the Desert Laboratory on Tumamoc Hill, set sail with Sykes on a small sloop from Yuma to conduct the first serious look at the delta’s ecology. He described the delta as a subtropical area that “probably offers more varied and striking features of natural history than any other watercourse in North America.”

With the delta adjoining what he called the most arid desert region in North America, an area receiving only three inches of rainfall annually, he found vivid contrasts of “rank swamp vegetation and water-loving plants” with toughened, hairy desert plants.

In 1922, naturalist Aldo Leopold visited the delta, and described a verdant setting of overwhelming numbers of birds, fish and game mammals coexisting with a wild, capricious river.

“At each bend, we saw egrets standing in the pools ahead, each white statue matched by its white reflection,” Leopold wrote in “A Sand County Almanac.” “Fleets of cormorants drove their black prows in quest of skittering mullets, avocets, willets and yellowlegs dozed one-legged on the bars; mallards, wigeons and teal sprang skyward in alarm. When a troop of egrets settled on a far, green willow, they looked like a premature snowstorm.”

In his 1945 book “The Colorado,” southwestern author Frank Waters told of the steamer Topolobampo, which in November 1922 was smacked by a 15-foot-tall wall of tidewater moving “at the speed of an express train” just before midnight as it carried 125 passengers up the delta from Guaymas to work in Mexicali Valley cotton fields.

“There was hardly time for a single frightened cry. The wave caught the Topolobampo squarely abeam, snapped the hawsers like threads and rolled the ship over like a log,” Waters wrote. Only 39 passengers survived.

In 1981, author Philip Fradkin used a kayak trip up the delta to close his book on the Colorado, “A River No More.” Noting that the river had flowed only infrequently into the Gulf of California since 1961, he described “a river so greatly diminished along its 1,700-mile-long journey from the farthest point on the Continental Divide that before reaching its proper ending, the limp water simply evaporates from shallow ponds into the azure skies of the hottest region on the continent.”

In 1983 and 1984, floods sent up to 25 million acre-feet downriver annually, enough to restore some of the cottonwood-willow forest. This happened again in the early to mid 1990s, and the late 1990s.

But since 2000, drought has choked the delta again. Populations of water-dependent birds such as song sparrows and snowy egrets declined sharply from 2002 to 2007, a study by University of Arizona Professor Edward Glenn and other researchers found. Ten species seen in the early years of the study weren’t seen at all by the end.

In those five years, the percentage of native trees among all riverfront vegetation dropped by almost 50 percent. Non-native salt cedar shrubs increased sharply, while native willow trees declined. The amount of open water in the delta dropped 80 percent.

Sunday: Residents feel a surge of joy as water returns to the Colorado River Delta.

Today: The history of the once-lush region.

Water released from the Morelos Dam on the Colorado River south of Yuma is bringing hope and life back to the dry delta in Mexico. Find the fi…

Ray Turner, ecological pioneer of the Sonoran Desert, dies at 91

Turner used photos to document population shifts of saguaros and other desert natives.

Abelardo Martinez stands in a blocked duct which leads water to his fields near Colonia Coahuila, Mexico. ﻿

Aerial photos show water creeping into the dry Colorado River Delta close to the Morelos Dam south of Yuma. After its release March 22, high levels of water gushed down the Colorado River for the first time in more than a decade.