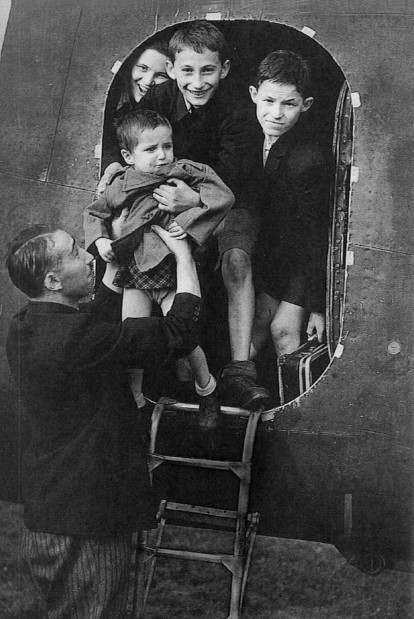 Sidney Finkel, then Sevek Finkelstein, is at top center, in the doorway. He was among a group of young Jewish concentration-camp survivors being flown to sanctuary in England in August 1945. 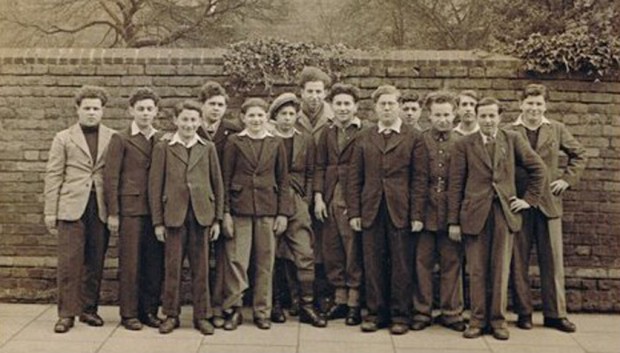 Sidney Finkel is the third young man from the left in this photo taken in England after World War II ended. He was taken there after the liberation of Buchenwald. 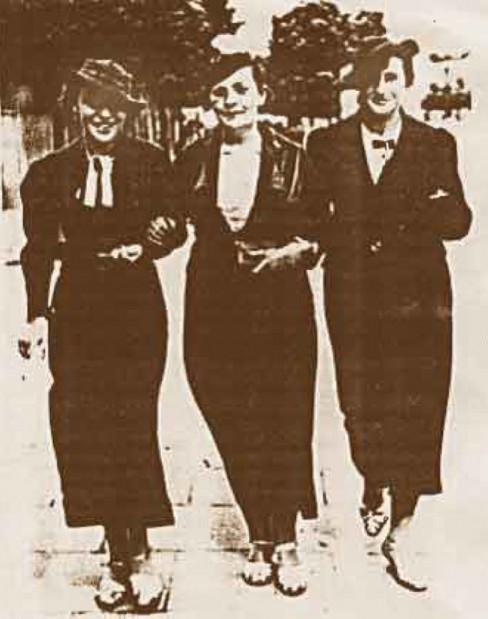 Among the family members who died in the Holocaust are, from left, Sidney's sister, Ronia, who was executed after giving birth in a Catholic hospital; his aunt, Rachel; and his mother, Faiga. Ronia's newborn son was thrown out a hospital window to his death. 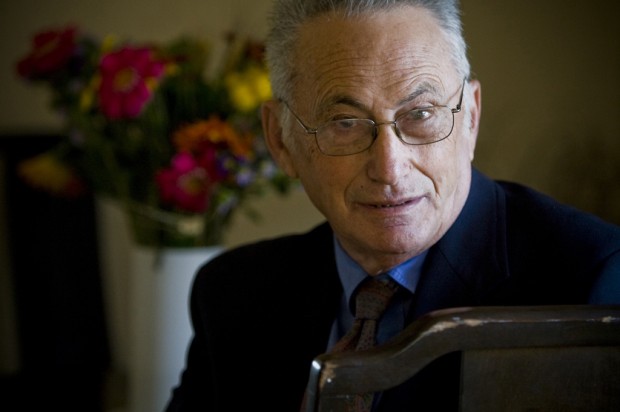 For five decades, and across an ocean, Sidney Finkel carried his memories.

He told his wife just a bit, but he didn't talk about his childhood and the Holocaust with anyone else, including their children.

"I didn't want to burden my kids and have them carry it on and carry the hatred," said the retired Chicago salesman.

But in the mid-1990s, when their daughter Ruth was expecting her first child, she called her father at his Chicago home.

She wanted to know about his life in Poland. She needed to hear what happened to her grandparents, her aunts and uncles, and to a newborn boy who would have been her older cousin.

So Sidney drove to his daughter's home in Champaign, Ill., and he told her. And he's been sharing his story ever since, at schools, colleges and universities in Tucson and in Chicago.

His message is as much about the consequences of hatred and prejudice as it is about tolerance and compassion.

"I feel very fortunate that I have the opportunity to do this, to meet with young people across the country and share my story," he said.

The recognition, he said, is "one of the greatest things to happen to me" - a treasured accomplishment for a man denied a childhood, a man who received his GED at age 55.

As a child and young teen, Sidney was Sevek Finkelstein.

In his memoir, "Sevek and the Holocaust: The Boy Who Refused to Die," Sidney reflects on being born on Dec. 19, 1931, in Lodz, Poland. It was not, he writes, a good year for a Jewish boy to join the world.

Sidney lived with his parents, Lieb and Faiga (Gold) Finkelstein, and his siblings: Ronia, Isaac, Lola and Frania. (Another sister, Adele, died before he was born).

In many ways, the early years were idyllic. His father owned a small flour mill and, by the time Sidney was 6, his family was becoming prosperous.

But soon, anti-Semitism changed young Sidney's life dramatically. One of his earliest memories is of being sent to a nearby store for thread.

"As I came to the counter and was about to make the purchase, someone in the crowd shouted that I was a Jew and not to serve me," Sidney wrote in his book. The harassment was hurtful and frightening.

He also remembered receiving ice skates for his eighth birthday but not being able to use them. His parents were afraid to bring him to the town rink.

In 1939, the German army invaded Poland and Sidney's family lost what was left: his father's job, their home, their possessions.

Soon they were living in a ghetto in Piotrkow, Poland. Conditions were filthy and crowded, often with five or more people to a room. There were no toilets and no running water.

During this time, Sidney's oldest and most beloved sister, Ronia, was pregnant with her first child. Arrangements were made for her to be admitted to a Catholic hospital outside the ghetto, where she gave birth to a boy.

Someone at the hospital realized she was pretending to be Catholic and informed the Gestapo. Her infant son was thrown out the window to his death and his mother was taken to a Jewish cemetery and shot.

Another time, while helping unload sacks from a German truck, Sidney, then 9, was almost shot by a Nazi soldier for arguing with another boy.

"He took out his revolver from his holster, stretched out his arm and was about to pull the trigger," Sidney wrote. "I was given a reprieve when the president of the (ghetto's) Jewish Council, Mr. Warszawski, happened by."

As he ages, Sidney said, he has grown more optimistic about the world. He believes people are more aware, that human rights are better protected.

What he still fears is nationalism.

"It's the prong that destroys and yet we take so easily to it," he said. "We must remember the nationalism in Germany, how vocal that was and how people became mesmerized."

Sidney and his wife have been spending their winters in Tucson for 11 years and now live in the house once owned by his sister, Lola Tauber, who died at 74. Sidney said he loves the warmth and the sunshine.

It's a sharp contrast from his horrific childhood journey that took him from the ghetto to a German work camp called Czestochowa to Buchenwald, one of Germany's largest concentration camps.

It was here that Sidney, who had been separated from his father and brother for several months, last saw his father.

"My father cried with joy when he saw me. He hugged me as tears ran down his cheeks. He had lost a lot of weight and he looked very weak and emaciated. He took a piece of bread from his knapsack and he gave it to me," Sidney wrote.

Emaciated and traumatized, Sidney found he was incapable of showing any affection in return - a nightmarish memory for a young boy who loved his father "more than any other."

"I bore no resemblance to the son he knew. Sevek, the fun-loving, affectionate boyish kid, was dead. I was more like an animal, with instincts only for survival."

Shortly after Sidney shared his story with his daughter in Illinois, he visited the Holocaust Museum in Washington, D.C., with his wife, Jean, and two of their five children.

Initially, he said, he talked about the exhibits "as if I was a guide with no personal feelings."

Then he caught sight of a railroad cattle car.

"Somewhere from my memory dread and fear overcame me," he wrote. "Instantaneously, I felt like I was back riding in those cattle cars. This was so frightening for me that I could no longer maintain my normal posture."

He ran to his wife and cried "tears that were impossible for me to shed before."

Visiting the museum and writing his book has helped, he said.

So has a recent trip.

In April, Sidney, his wife and two of their children flew to Germany to commemorate the 66th year since the liberation of Buchenwald. It was the first time he'd been there since the war.

"I was very, very nervous," he said. "The young German people who were there were absolutely wonderful. They couldn't do enough for us."

Sidney was given documents about what had happened to his father and one of his uncles.

He toured the bunkers, and he remembered.

Sidney wrote his autobiography in 2004 as a memorial to his family. His mother, father and sister, Frania, died during the Holocaust; his brother Isaac and sister Lola managed to survive.

"This is Sevek's experience," he said of his book. "It's about the way he sees things and most of the time he doesn't know what is going on around him."

When Sidney arrived in England in August 1945, months after Buchenwald was liberated by U.S. forces, he was 13 and illiterate. The psychologists and social workers told him he simply needed to forget the past.

It was during this time that an employer recommended he change his name to the more English-sounding Sidney Finkel.

Sidney worked hard in school, but the trauma was difficult to overcome. (He was eventually diagnosed with post-traumatic stress disorder and still takes medication, subsidized by the German government).

Eventually, while living in England, Sidney received a letter from the American Embassy welcoming him to a new country and what was to become his new homeland.

On the ship ride across the Atlantic Ocean, he told a group of "cheerful, generous" Americans about how he longed to learn to ice skate, and how he had been denied the chance in Poland.

A young woman in the crowd told him she lived in New York City and she would take him skating.

She kept her promise.

"On the first day of my new life, I was skating, a pretty American girl by my side," he wrote. "I felt such a wonderful sense of freedom. Here, in America, everything is possible!"

Sidney Finkel, then Sevek Finkelstein, is at top center, in the doorway. He was among a group of young Jewish concentration-camp survivors being flown to sanctuary in England in August 1945.

Sidney Finkel is the third young man from the left in this photo taken in England after World War II ended. He was taken there after the liberation of Buchenwald.

Among the family members who died in the Holocaust are, from left, Sidney's sister, Ronia, who was executed after giving birth in a Catholic hospital; his aunt, Rachel; and his mother, Faiga. Ronia's newborn son was thrown out a hospital window to his death.