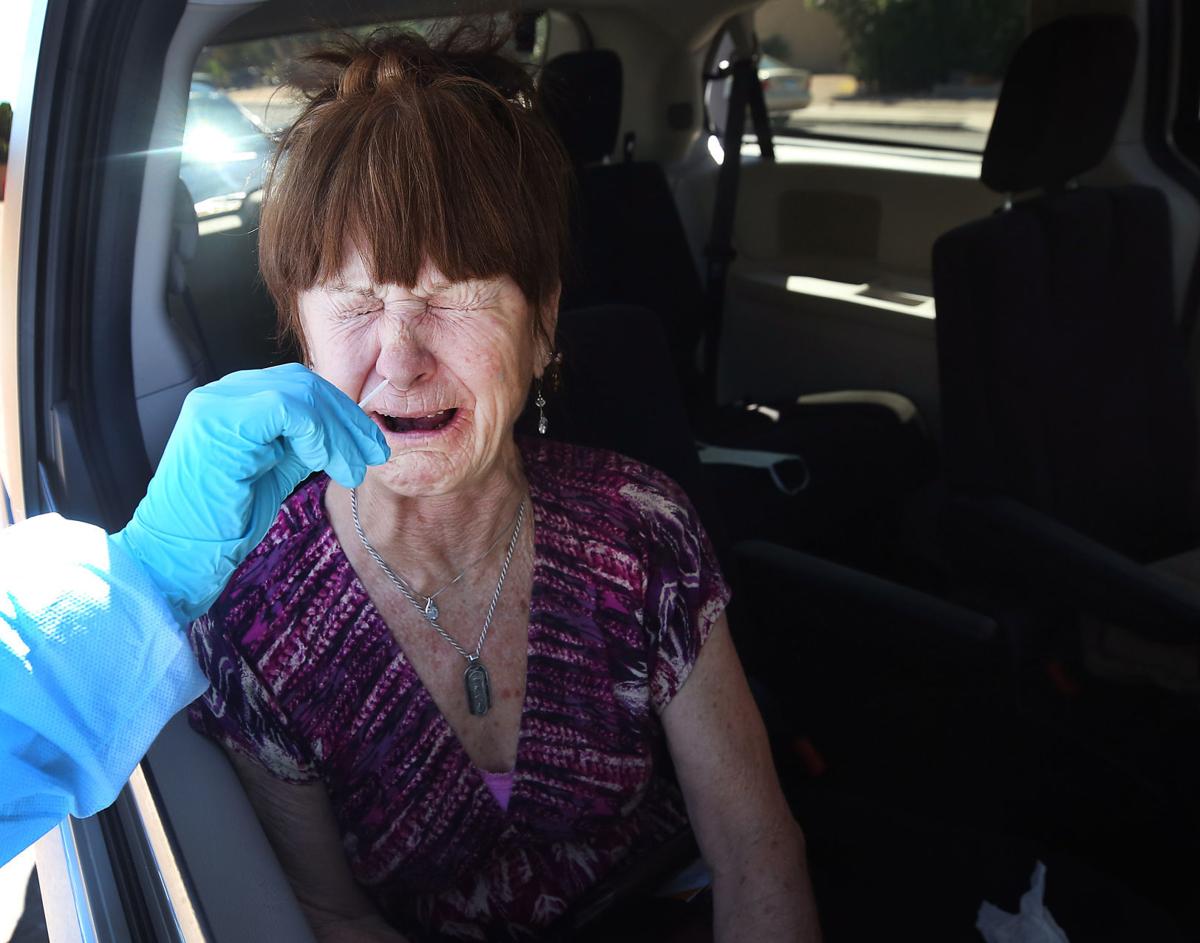 Cheri Carr grimaces as she gets a nasal swab to test for coronavirus at a local drive-thru testing site. 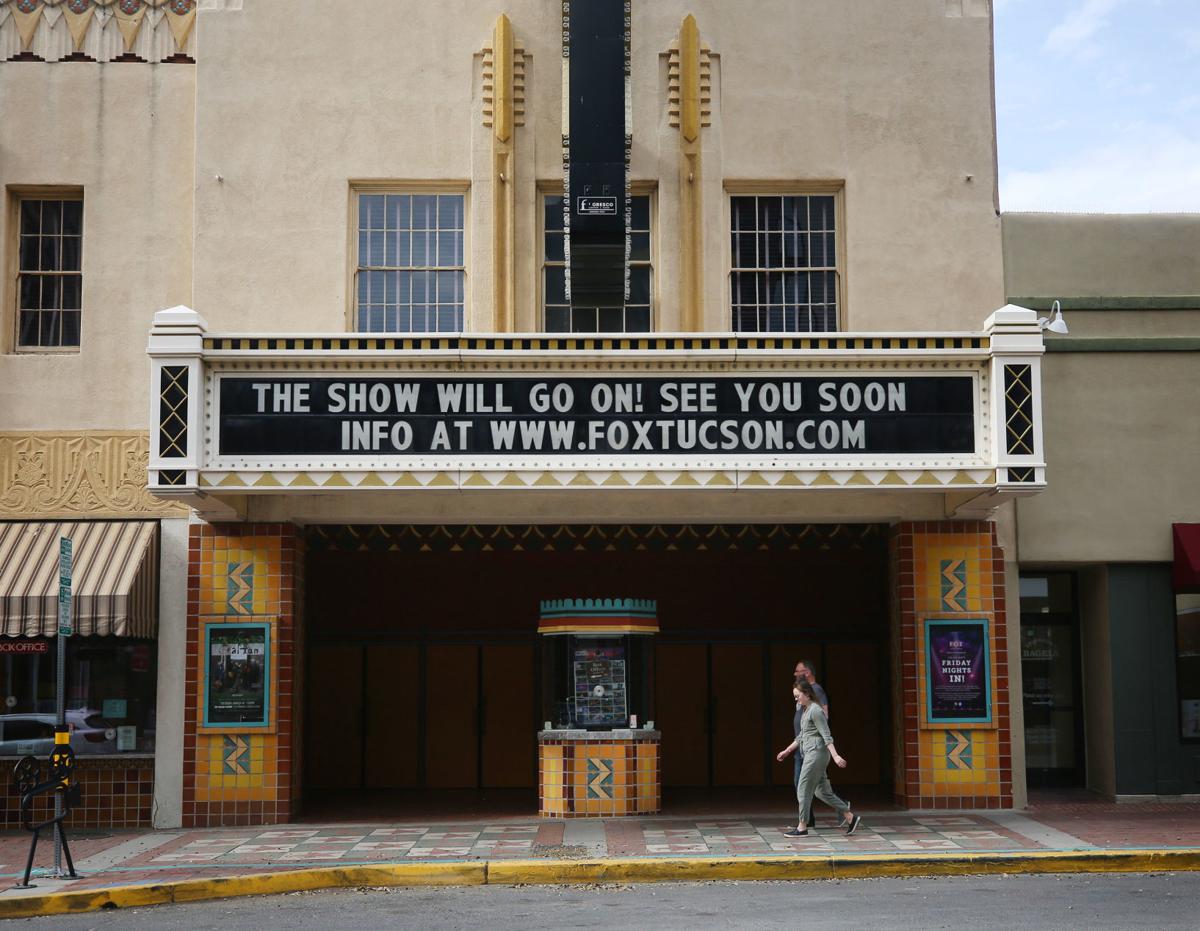 Gov. Doug Ducey’s stay-at-home measures are set to end April 30. He has not said whether the orders will continue, be modified or end. One virus model shows a declining Arizona death rate hitting zero or close to that by June 13.

PHOENIX — How close is Arizona to hitting a peak in COVID-19 cases?

That depends on whose numbers — and whose virus models — you believe.

Reports by several different organizations paint a wide spectrum of pandemic possibilities for the state. However, they include a piece of positive news: Arizona will have enough hospital space, intensive-care beds and ventilators to treat its COVID-19 patients.

But the question now goes to when Gov. Doug Ducey will conclude that the worst of the coronavirus outbreak has passed and the risk is sufficiently reduced in Arizona to begin unwinding restrictions he imposed on everyday life.

And the governor has to make some decisions soon: His stay-at-home orders are set to end at the end of April 30. He has not said whether the orders will continue, be modified or end.

“Regardless of which one of these models happens to be right, we’re prepared,” Ducey said.

“We don’t know if we’re past the peak or before the peak,” Ducey said this week.

“I’m not going to morph into a fortuneteller and answer your question,” Ducey said in response to a question from Capitol Media Services about his timeline. “We’re going to follow the facts.”

On the optimistic side — what state health director Cara Christ called the “rosiest” model — is the Institute for Health Metrics and Evaluation. Its most recent report suggests that the peak in daily deaths could occur by this weekend.

Longer term, the model shows a declining death rate, probably hitting zero or close to that by June 13. But it still figures that 583 Arizonans eventually will die from COVID-19.

On a more practical level, the IHME model figures that Arizona’s use of hospital facilities won’t grow at all from this point forward.

By contrast, Christ said federal agencies, including the Centers for Disease Control and the Federal Emergency Management Agency, shared with her models they had built for Arizona based on projection formulas developed by John Hopkins University.

Christ did not share any death data from that model, saying that she has not received permission to provide how they got to the numbers. But she said that model predicts that the use of hospital beds and medical equipment will not peak in Arizona until around June 11.

“This model appears to be the most realistic, and the predictions are reassuring,” the director said.

What makes that model particularly relevant, Christ said, is that it assumes the state’s emergency orders end April 30.

That finding could prove key to any decision Ducey makes in the next week, as it suggests that extending “mitigation strategies” beyond the end of the month might result in an earlier peak — and, potentially, fewer cases of the virus and fewer deaths.

Others have their own proposals.

One, said Christ, was developed by her agency partnering with the University of Arizona and Arizona State University for a “more targeted, Arizona-specific model.”

It produced its own range of infections, with a mid-range prediction of about 88,466 cases. But what it predicts is that the peak will not occur until about the middle of May. It predicts peak hospital bed and ICU usage to come about May 22.

And if that’s not enough, there’s another model produced by COVIDActNow.org. It was created by volunteers who partnered with epidemiologists and data scientists to look at not just the raw numbers, but the effects of intervention.

Based on current trends, that model predicts that 4 percent of Arizonans eventually will contract the virus, with a total of 2,000 deaths.

But the model also has a warning of sorts. It says if restrictions are lifted, up to 70 percent of Arizonans could be infected in the next three months, with 65,000 people eventually dying.

This model also does some county-by-county breakdowns.

In Pima County, for example, even with no easing of restrictions, it predicts 6 percent of the population will contract COVID-19. By contrast, maintaining stay-at-home provisions will still mean 3 percent infection rate in Yavapai County, 2 percent in Mohave County and the same for Cochise County.

At the other extreme, projections based on current trends for Navajo County shows a 12 percent infection rate in the coming three months.

The number of confirmed coronavirus cases across Arizona is 6,045, the Arizona Department of Health Services said Friday morning in its daily tally.

Section of Tucson's Interstate-19 closing this weekend for construction

Interstate 19 will be closed overnight Sunday between the freeway junction and West Irvington Road.

Cheri Carr grimaces as she gets a nasal swab to test for coronavirus at a local drive-thru testing site.

Gov. Doug Ducey’s stay-at-home measures are set to end April 30. He has not said whether the orders will continue, be modified or end. One virus model shows a declining Arizona death rate hitting zero or close to that by June 13.