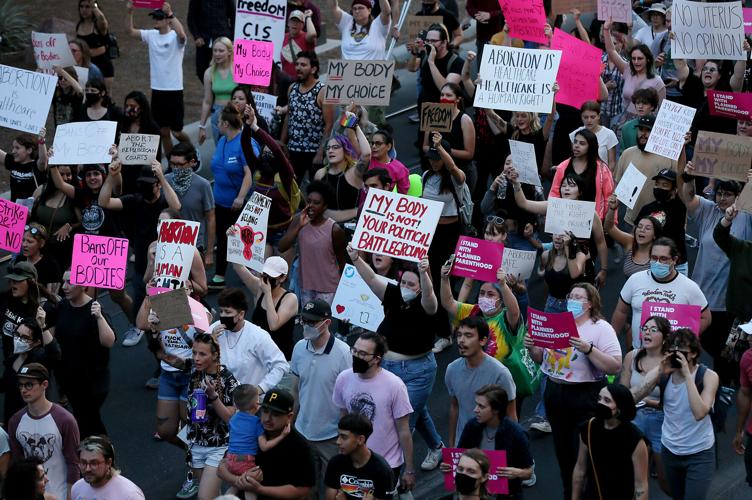 But what that means for Arizona women will depend on several factors, including politics, public attitudes — and what happens automatically in the state the moment that decision comes down.

If the decision on abortion rights is left to the state, the most pressing question could be who voters choose to elect in November. And that goes to the issue of whether Democrats can use the ruling to fire up their own faithful and sufficient independents to make a difference in the makeup of the 2023 legislature — and, potentially, in statewide offices.

“This November, Arizonans are going to make our outrage heard by electing pro-choice women up and down the ballot who will do what Republicans have not: protect our ability to make our own decisions,” Raquel Teran, who chairs the party, said in a prepared statement.

And Rodd McLeod, who advises Democrats, said a decision by the high court that could leave Arizona women without options for abortion might be enough to sway some voters. He cited a survey that found 54% of Arizonans support keeping the procedure legal in at least certain circumstances — and just 9% who want it outlawed in all cases, which could be exactly what happens in the state if Roe is overturned.

But two veteran Republican political consultants say while the issue will attract some attention during the electoral season, they’re not convinced it ultimately will result in a wholesale change at the state Capitol, at least not this year.

“I think that Democrats are probably over-optimistic about how that will help them at the legislative level or at the statewide level,” said Stan Barnes. At best, he acknowledged that it might mean something on the margins, particularly in “swing” legislative districts where there is only a small difference in party voter registration.

“After all, that’s what a swing district is all about,” Barnes said. “And this is the kind of issue that can move voters.”

But Chuck Coughlin said those anticipating an immediate sea change at the Capitol from the Supreme Court ruling are deluding themselves.

“Nothing happens fast in culture and the laws that govern it,” said Coughlin, the second GOP consultant.

If the Legislature remains pretty much the same philosophically on the question of abortion, that makes who is elected to the top statewide office — and who has the power of veto — even more critical. On Tuesday, Democratic gubernatorial hopeful Katie Hobbs wasted no time in telling voters what she thinks.

“F- — the patriarchy,” she wrote in a Twitter message. “The Supreme Court may have turned its back on women, but I never will.”

That drew an immediate reaction from Republican Karrin Taylor Robson.

“Katie, by your definition, the ‘patriarchy’ includes a 50-year-old mom with an impeccable legal résumé, the champions of woman’s suffrage, and my daughters,” she responded on Twitter. “I’m proud to stand with all of them and defend life.”

And Kari Lake, the other leading GOP gubernatorial contender, cited Hobbs’ post and called her “the most radical person to ever run for governor in Arizona.”

But that leaves two questions.

One is whether the attitudes of Arizonans in 2022 is what it was in 1973, when the high court said there is a constitutional right of women to terminate a pregnancy. That meant Arizona could not enforce its law at the time that made abortion a crime, with no exceptions even for rape or incest.

This year state lawmakers, anticipating Roe would be overturned, had several options to consider.

Rep. Teresa Martinez, R-Casa Grande, and Sen. Wendy Rogers, R-Flagstaff, sought to impose a Texas-style “heartbeat” abortion ban to allow any individual to sue doctors or those who aid a woman to get an abortion and even permit them to collect $10,000 penalties.

But Republican legislative leaders refused to allow either to be heard.

And Cathi Herrod, president of the Center for Arizona Policy, told Capitol Media Services that while she supports all efforts to restrict abortion, she instead was putting her energy into a more moderate proposal by Sen. Nancy Barto, R-Phoenix, to outlaw abortions after 15 weeks.

That is what legislators ultimately approved. And, assuming Roe is overturned and states get to make their own laws, it will take effect 90 days after the legislative session ends.

“But ultrasound technology clearly shows the development of an unborn child,” she said. And that, Herrod said she believes, means fewer people support abortion on demand now than they did back then.

And there’s something else: She contends that the statute that was on the books in 1973 — the one with no exceptions — immediately again becomes enforceable.

But Gov. Doug Ducey has some different ideas.

He told Capitol Media Services that his March 30 signature on the 15-week ban makes the pre-1973 law a legal nullity.

“The law of the land today in Arizona is the 15-weeks’ law,” he said. “And that will remain law,” he continued, regardless of whether or not the justices overturn Roe entirely.

Barto, who sponsored the 15-week ban, said the governor is wrong.

She pointed out that the bill Ducey signed actually spells out that approval of the 15-week ban “does not repeal, by implication or otherwise, 13-3603 (the pre-1973 anti-abortion law), or any other applicable state law regulating or restricting abortion.”

“That shouldn’t be news to the governor’s office,” Barto said, saying his interpretation is “not how the new law reads.”

But Kris Mayes, the Democratic candidate for attorney general, pointed out there actually is a specific right of privacy in the Arizona Constitution. And based on that she promised to refuse to enforce any abortion restrictions regardless of what the U.S. Supreme Court decides.

Only thing is, abortion actually was illegal in Arizona in 1912 when the state constitution was adopted. And the state Court of Appeals, in a 2011 ruling, sidestepped the question of whether that privacy clause protects the right of women to terminate a pregnancy.

Arizona lawmakers on Monday voted to give police to make arrests related to the lucrative thefts.

The state House on Monday gave final approval to spending $400 million to widen about 25 miles of Interstate 10, funding that allows the state to apply for federal funds to complete the job.

For Star subscribers: A lawsuit filed by the Jewish Community Relations Council of Greater Phoenix and two of its members tried to block the state from using the same gas that Nazis used.

For Star subscribers: Organizers will need to gather at least 356,467 valid petition by July 7 to put the measure on the November ballot. It would put a "right to reproductive freedom'' in the Arizona Constitution.