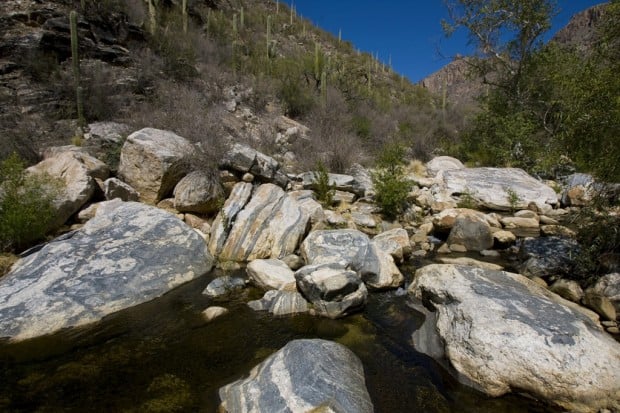 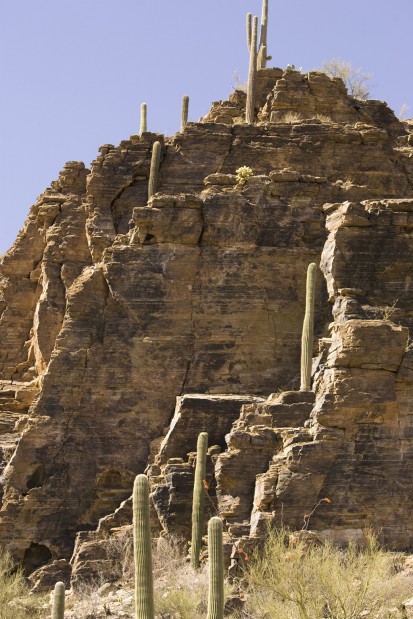 This crag, an eye-catching expanse of gneiss rock near Tram Stop 1, makes a perch for saguaros. Cracks in the cliff face are geologic features known as joints. 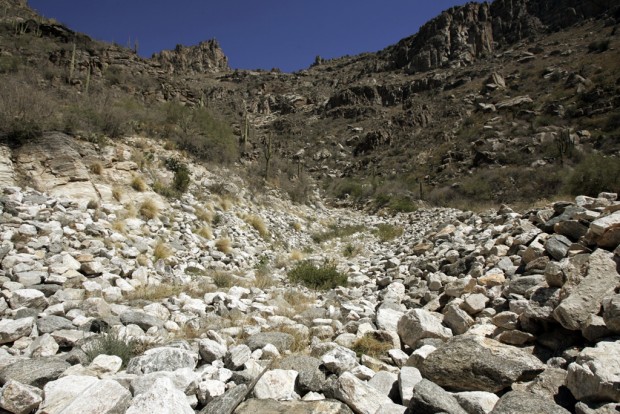 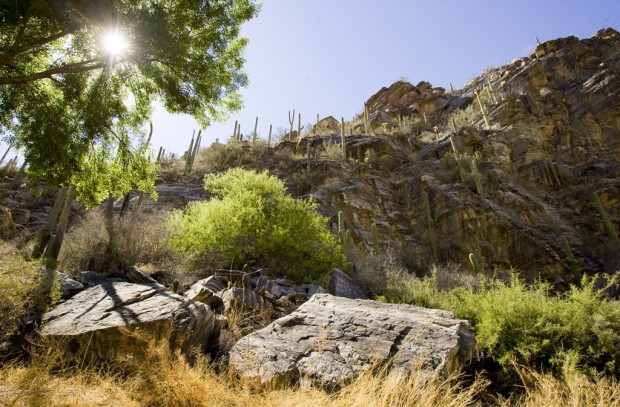 Large boulders, like these near Tram Stop 2 in Sabino Canyon, likely tumbled from higher in the canyon at some unknown time during a rock fall or landslide. 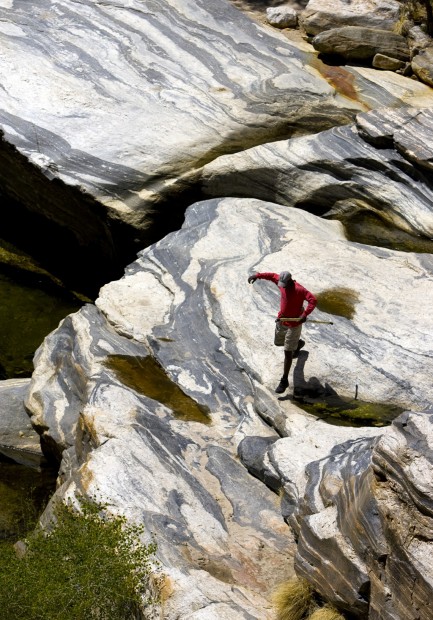 A hiker navigates an expanse of gneiss rock near Tram Stop 8. It is a site where pockets and natural tanks in the rock sometimes hold water.
Doug Kreutz Arizona Daily Star

What we know today as Sabino Canyon was the site of a whole lot of scrunching 25 million years ago.

A display in the super-scenic canyon northeast of Tucson says the granite rocks were "squeezed together and stretched like warm taffy 25 million years ago."

The resulting gneiss - pronounced "nice" - appears today as the comely striped rocks seen in canyon cliffs and some streambeds.

"The geology in Sabino Canyon is just fantastic," says Michael Conway of the Arizona Geological Survey.

"Granites are exposed. Gneiss is exposed" in canyon cliffs, Conway says. "In streambeds, you can see massive boulders brought down from on high."

Today - with help from Conway, exhibits in the canyon visitor center and a richly detailed book by John V. Bezy called "A Guide to the Geology of Sabino Canyon and the Catalina Highway" - we offer an introductory guide to the rocky sights.

Our report begins with a brief summary of Sabino's geologic history - followed by a suggested self-guided tour of specific sites along the canyon road where the rocks really rock.

You could walk the 3.8-mile canyon road to take the tour at a leisurely pace or catch the canyon tram for a quicker trip, perhaps getting off at selected stops.

Along the way, watch for evidence of giant debris flows from floods that swept through the canyon in 2006.

A tour to try

Here are some spots - suggested by author John Bezy and others - for geological observations along the Sabino Canyon road.

These and others are described in greater detail in Bezy's book, published by the Arizona Geological Survey and available at a bookstore in the canyon visitor center.

Locations of the five observation points are described in relation to marked tram stops along the canyon road.

No need to limit yourself to the suggested spots, of course. Let your eyes scan the cliffs and side canyons all along the way and you'll get an expanded sense of the geologic complexity and beauty.

• Where: Watch for a side canyon on the left side of road shortly before Tram Stop 1. (For those taking the tour by tram, it's possible to get off at any stop and catch the next tram to continue the journey.) Walk about 35 yards up the Rattlesnake Canyon Trail to a cliff on the right side of the trail.

• What: You're looking at a nice hunk of gneiss. Some of it is solid and some is broken by cracks known as joints. The joints are a sort of eons-old record of folding and faulting, and they provide an entry point for water, ice and plant roots that can slowly - ever so slowly - break apart the rocks and restructure the landscape.

• Where: Proceed up the road to Tram Stop 2 and look up at the slopes on the left (west) side of Sabino Creek.

• What: It's immediately evident that this is a place where things have come tumbling down. Enormous slabs and boulders have broken away from higher in the canyon and plunged down slope in rockfalls and landslides. The rock debris - and similar jumbles up and down the canyon - tell a story. It's a tale of a canyon slowly becoming wider as rocks slide away and break down - eventually to be carried away in fragments by flooding streams.

• Where: Go to Tram Stop 5 near a bridge over Sabino Creek.

• What: Look at the streambed - or walk into it when the creek is dry or just trickling. You're seeing not only the canyon-cutting heart of Sabino, but also observing the boulders, rock fragments and sand that once were huge slabs and blocks like those we saw at Point 2. Countless centuries after crashing down the slopes, the broken-down rock is washed out of the canyon.

• Where: Between Tram Stops 6 and 7. Look for a thimble-shaped peak called, yes, Thimble Peak rising above the crest of a ridge on the east side of the canyon.

• What: Author Bezy notes in his book that the peak is "an erosional remnant of a thick, layer-shaped intrusion of granite called a sill." The granite was molten when it was injected into a much older type of granite some 50 million years ago. Later, the sill cooled and, after being uplifted, was exposed by erosion. If you are carrying powerful binoculars, check out the steep peak's summit for signs of hikers or climbers.

• Where: Starting from Tram Stop 8, walk a short distance up Sabino Creek and watch for depressions in the beautifully banded gneiss along the watercourse.

• What: Here you'll see pockets and natural tanks in the rock that sometimes hold water from rainfall or high stream flows.

Birth of a canyon

The geologic history of Sabino Canyon is a complex saga of mighty forces and subtle changes playing out since a bit before our time - 65 million years ago.

This brief summary and timeline - based mainly on displays at the canyon visitor center - also includes details from geologists and texts.

Sabino Canyon wouldn't have been such a popular hiking destination way back then, at about the end of the age of dinosaurs. At the site of the canyon and the modern-day Catalina Mountains, an enormous dead volcano lay atop granite rocks up to 1.4 billion years old.

Molten rock rose toward the surface of the area. After heating and changing the surrounding rocks in various ways, the molten mass cooled and hardened into rock known today as wilderness granite.

Complex geological forces in the region stretched and sheared the Earth's crust. Rocks near the surface slid off a rising dome, and rocks beneath the sliding layers were stretched into sheets. The end result was the striped and banded rock - visible in many parts of the canyon today - called gneiss.

Rocks in the area, which was still being pulled apart, became brittle and cracked, forming steep faults. Blocks of the crust dropped downward around an area that eventually took shape as the Catalina Mountains.

The floods and debris flows that hit Sabino Canyon in 2006 damaged the canyon road so severely that parts of it remained closed for two years. It's entire 3.8-mile length is open to walkers and tram passengers. It's closed to private vehicles.

Images from the amazing geology in Sabino Canyon in the Santa Catalina Mountains. See story by Doug Kreutz in the April 17 edition of the Daily Star.

This crag, an eye-catching expanse of gneiss rock near Tram Stop 1, makes a perch for saguaros. Cracks in the cliff face are geologic features known as joints.

Large boulders, like these near Tram Stop 2 in Sabino Canyon, likely tumbled from higher in the canyon at some unknown time during a rock fall or landslide.

A hiker navigates an expanse of gneiss rock near Tram Stop 8. It is a site where pockets and natural tanks in the rock sometimes hold water.
© Copyright 2021 Arizona Daily Star, PO Box 26887 Tucson, AZ | Terms of Use | Privacy Policy
Powered by BLOX Content Management System from TownNews.com.
You don't have any notifications.