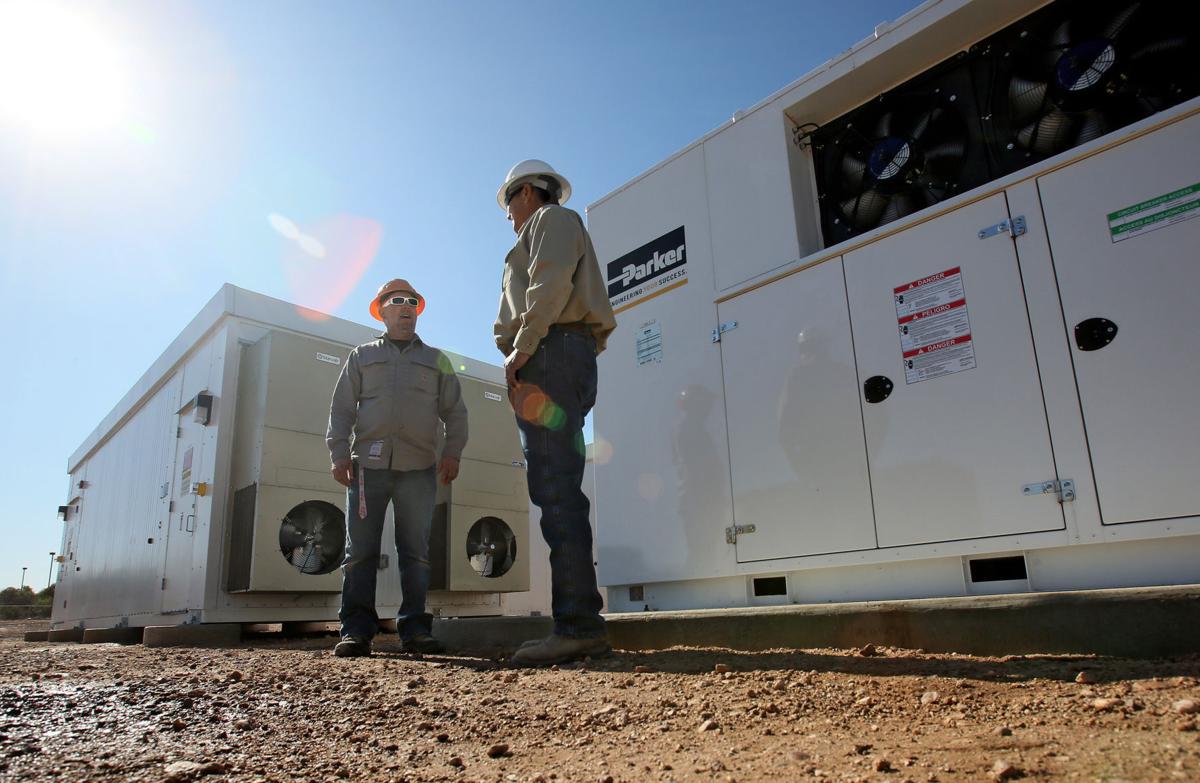 Calvin Odell, left, and Cesar Durazo stand near an energy-storage structure, left, where solar energy is stored, and a battery inverter, right. 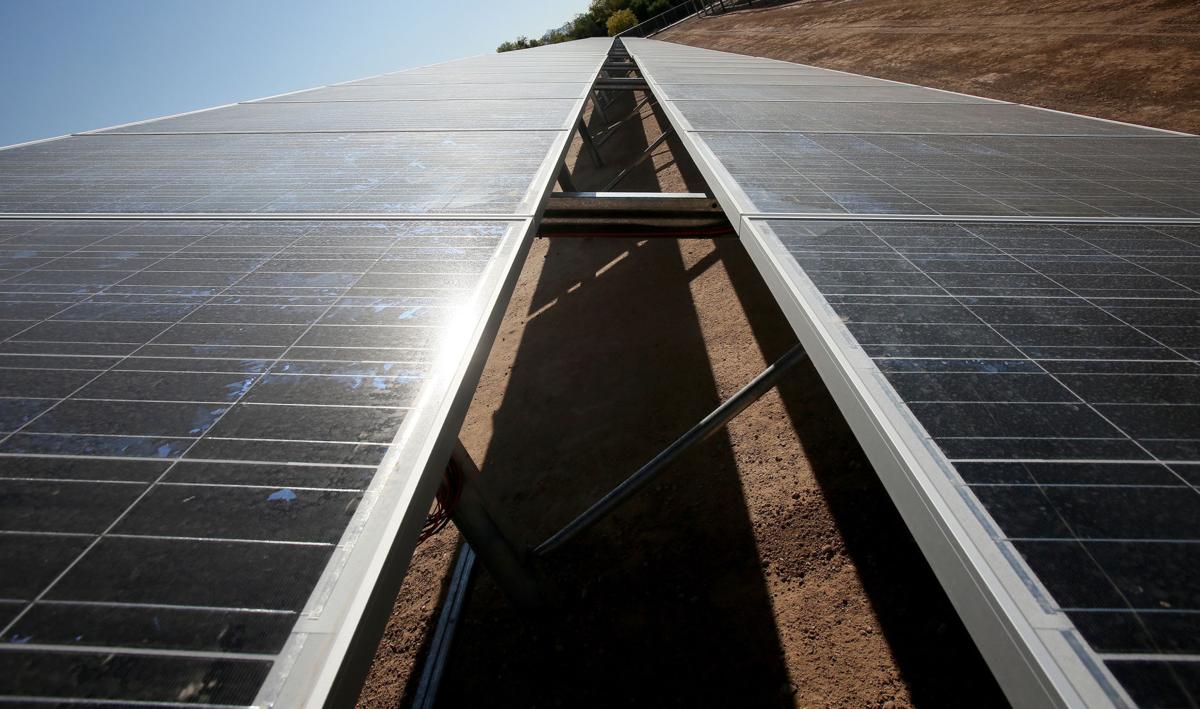 Solar panels tilt toward the sun at the University of Arizona Tech Park Solar Zone. 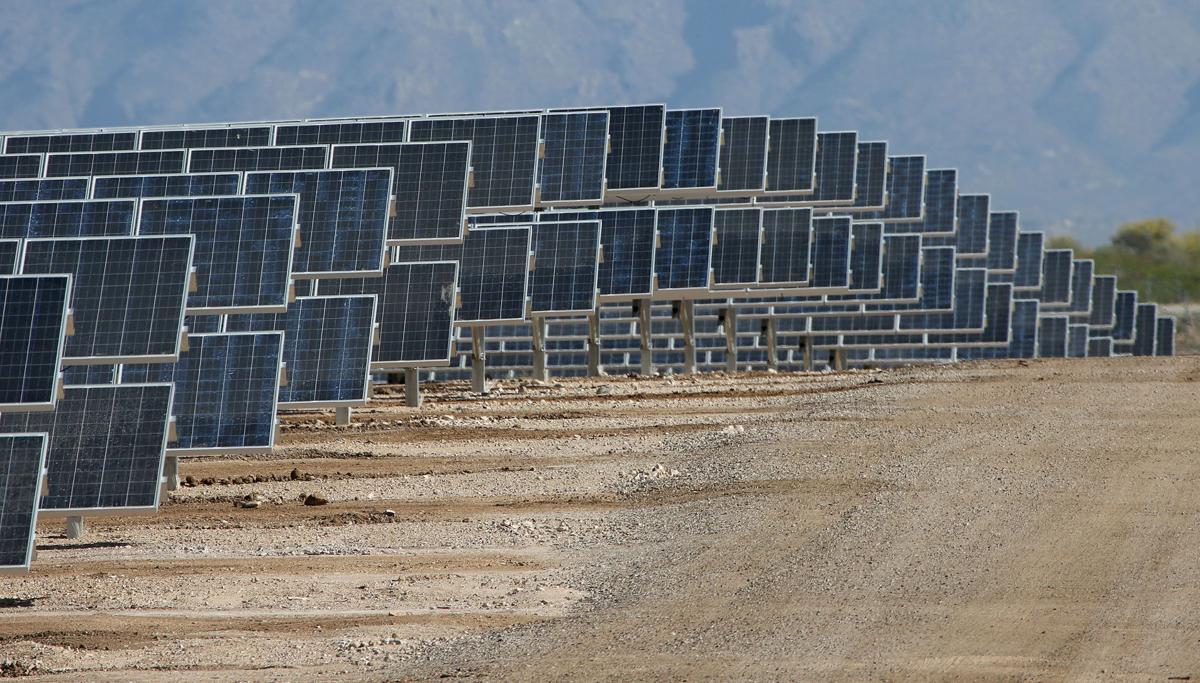 Power from solar panels at the University of Arizona Tech Park can be stored for use in an outage or to meet high demand.

In December, a subsidiary of Florida-based NextEra Energy Resources completed construction of a 10-megawatt lithium-ion energy storage system at a TEP substation near Interstate 10 and West Grant Road.

TEP will buy the solar power from E.On and pay capacity charges for both battery systems under power-purchase agreements.

The TEP installations are short-duration battery systems intended to bridge the time it takes to bring supplemental generating sources online after an outage, and to help with grid reliability by shoring up voltage and regulating power frequency when needed.

Long-duration storage systems are designed to keep customers’ lights on for hours during an outage — or even replace natural-gas plants fired up to handle demand peaks.

But those are more costly and have been mainly pursued in places with high electric rates like California and Hawaii.

“This is a pretty new technology that has become reliable, and the cost is now reasonable,” Barrios said.

TEP expects to spend about $1.7 million annually on the two new storage systems combined, under contract with E.On and NextEra.

Under a plan approved by the Arizona Corporation Commission, TEP will pay for the services through an existing purchased fuel and power surcharge that will cost the average customer about 13 cents per month, Barrios said.

Mark Frigo, an E.On vice president who heads the North American energy-storage business for the German-based company, said the short-term battery system at the Tech Park — the company’s first in North America — can pump out a full 10 megawatts of power for 15 minutes.

That can help even out grid power in places like Tucson, where solar arrays put out massive amounts of power, then drop off in the evening when demand soars, in what is know as a “duck curve.”

“That ramp-up and ramp-down puts a big stress on the transmission and distribution systems, and the batteries help you smooth that out and provide more grid resiliency,” Frigo said.

The storage systems are expected to save TEP money it would have to spend on other grid-stability measures, including standby gas combustion turbines that can take 10 minutes or more to start up.

“You can ramp it (storage) up very, very quickly,” Barrios said.

For example, he said, in early March TEP’s system experienced a voltage drop that prompted the utility to bring more generating resources online, but the system at the DeMoss Petrie substation instantly brought that circuit up to normal.

TEP isn’t alone in its storage expansion, in Arizona or nationally.

Arizona Public Service Co., the largest state-regulated utility, has agreed to buy a 4MW storage system for use with its company-owned rooftop solar program. APS installed a 1.5MW battery storage as a pilot project in Flagstaff in 2012.

GTM Research, a Boston-based firm that studies the renewable-energy markets, projects the U.S. energy-storage market will grow from 221 MW in 2016 to roughly 2.6 gigawatts — one gigawatt equals 1,000 megawatts — in 2022.

The move to utility-scale energy storage has been pioneered in places like Hawaii, which because of its reliance on imported fuel has historically paid the highest prices in the nation.

The Aloha State has jumped all-in on local, renewable generating resources such as solar and wind, but the intermittency of those resources has resulted in a more brittle power grid.

“Island communities such as Hawaii have been at the forefront of implementing these types of (storage) solutions, and now on the mainland it’s been recognized, and the prices have come down so much that it’s becoming mainstream here,” E.On’s Frigo said.

Hawaiian Electric has proposed a 20MW, five-hour-duration battery storage system paired with 28MW of solar in Kaua’i, to match peak demand with generation.

In California, which has mandated that state-regulated utilities install 1.3 gigawatts of storage by 2020, Southern California Edison has proposed a 100MW, four-hour battery system specifically designed to replace a gas peaker plant in Long Beach.

Barrios said TEP could install long-duration battery storage in the future, but for now plans to focus on short-run storage for grid resiliency.

Frigo said rapidly dropping prices for battery storage may convince TEP and other s to consider storage to replace the gas generators to handle peak demand, sooner rather than later.

“There are many in the power industry that believe batteries will become, in terms of cost, at parity with comparable peaking combustion turbines within the next two or three years,” he said.

TEP rates will rise about $8 a month, about $4 a month for Trico.

Calvin Odell, left, and Cesar Durazo stand near an energy-storage structure, left, where solar energy is stored, and a battery inverter, right.

Solar panels tilt toward the sun at the University of Arizona Tech Park Solar Zone.

Power from solar panels at the University of Arizona Tech Park can be stored for use in an outage or to meet high demand.