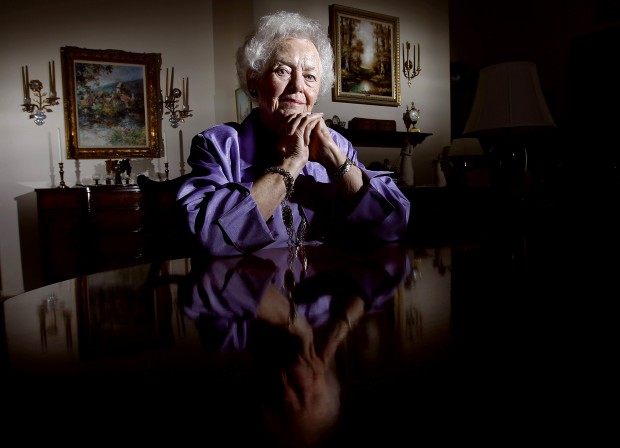 Philanthropist and arts patron Dorothy Vanek, shown in her Oro Valley home, paid for a piece by Stephen Paulus to commemorate the 10th anniversary of 9/11. 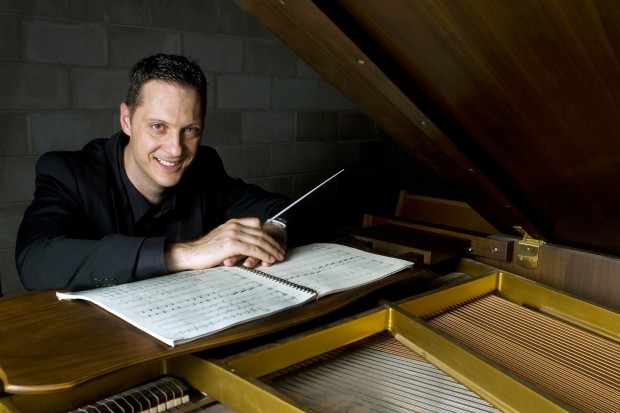 Dorothy Vanek has learned that lunch invitations usually come with strings attached. Like the lunch date in 2006 with Eric Holtan, conductor of the Tucson Chamber Artists professional choir.

He and a couple of TCA board members took Vanek, a Tucson philanthropist, to her favorite Oro Valley Italian restaurant. She ordered her usual, a grilled cheese, tomato and bacon sandwich. For an hour, she entertained them with tales of her extraordinary life lived throughout the world. She told them of the time she spent living in a Hilton Hotel in Morocco. The time she befriended the personal driver of American socialite Barbara Hutton during a short stint in Barcelona, Spain. All the homes she had on both coasts. Meeting her husband when she was a young stewardess and he was an aspiring airlines executive. Her childhood in St. Louis.

"We were about an hour into it and I'm just starting to get nervous," recalled Holtan. "I'm thinking how am I going to change the conversation to where I can make 'the ask,' "

He didn't have to. A few minutes later, Vanek turned to him and his colleagues:

He wanted $10,000 so the choir could mount what was then its most ambitious concert to date, Mozart's behemoth C Minor Mass. She happily gave him a check and has been supporting the choir since with an annual $15,000 gift, money Holtan said has helped the choir maintain its financial footing in challenging times and grow artistically.

"Three members of the board invited me to lunch, and when they invite me to lunch, there's always trouble," Vanek said with a chuckle, sitting in her spacious apartment at Oro Valley's Splendido retirement community one afternoon last month.

But this time, Holtan and his colleagues had a really big ask: $50,000 to pay noted American composer Stephen Paulus to write an oratorio for the choir to commemorate the 10-year anniversary of 9/11.

Vanek had one question: Why should she invest so much money - money that could feed a lot of hungry people - on such an endeavor?

Holtan told her he believed music could feed the soul, and withAmerica still smarting from the wounds of that horrible September day 10 years ago, and still suffering from all the financial and emotional agony it has wrought, feeding the soul might be as important as feeding the belly.

It didn't take much to convince Vanek, who proudly displays commemorative plates that serve as a timeline of the life her late husband Robert Vanek spent as an executive with Pan American World Airways.

"Bob died just before 9/11. If he hadn't died when he did, he certainly would have that day," she said, recounting how he had struggled with the tragedy of the 1977 Tenerife airport disaster that took 583 lives and with the bombing of Pan Am Flight 103 11 years later over Lockerbie, Scotland.

"We lost friends in the American (Airlines) flight and also on the United," she said, folding her hands in her lap and glancing down at her lilac pantsuit. "These people need to be remembered."

Vanek, who built most of her wealth from money she inherited from her father when she was in her 20s, said supporting classical music in Tucson is her passion. When she and her husband moved to Arizona 30 years ago, they got involved with the Tucson Symphony Orchestra; Robert Vanek served on the board of directors and the couple gave generously.

When he died, Vanek expanded her giving beyond the TSO to the volunteer Southern Arizona Symphony Orchestra and then to the Chamber Artists, two groups that had captured her imagination over the years.

"When Bob died, I starting giving more," she said.

Vanek estimates she spends about $100,000 a year supporting the three organizations.

"We couldn't do what we do without her, that's for sure," said the TSO's new executive director, Andrew Birgensmith, who was introduced to Vanek over lunch a couple weeks ago. "She's a very classy lady. She truly understands the value of annual giving as well as the benefits of the endowment."

"It truly is a blessing for us to have her as a sponsor, and thanks to her we have been able to do so many things," said SASO Music Director and Conductor Linus Lerner, whose organization has used Vanek's annual $20,000 support to bring in international guest artists and expand the repertoire it performs.

"She is involved in almost every project that we have done," he said. "The reason SASO is so good is because we are able to bring such talent that raises the quality of the orchestra. … There's a feeling, a desire to grow and to be a very good orchestra ... (Her support) makes that possible. Otherwise we'll have to take everything from ticket sales, and in this economy you really can't count on that. She writes a check and that secures that we can do it no matter the ticket sales."

Vanek, 85, demurs if you tell her that her generosity is likely saving classical music in Tucson. To her, it is an obligation and passion instilled from childhood growing up in St. Louis.

Her mother introduced Vanek to classical music and to philanthropy, something her mother learned from her grandfather, who made his fortune as an engineer with Ralston Purina. When she was a young woman, Vanek, helped her mother with a variety of charitable causes that went beyond writing a check.

Vanek studied music and dreamed of becoming an architect or interior designer when she was young. Instead, she became a stewardess, a job she loved and one that introduced her to the man who became her husband. When she married, she retired from the work world, something she said women did in those days after World War II. She devoted her energy to her husband and raising their two daughters; a third child died at birth.

The Vaneks lost one of their daughters in 2000. The other died in 2009. Vanek has two grandchildren and three great-grandchildren living in Texas. She sees them once or twice a year, but for the most part, she said she feels alone.

"I just never dreamed I would bury my whole family," she said, casting her eyes about the living room of her apartment decorated with the museum-worthy artwork, furniture and antiques that are the only tangible memories she has of her family.

"I've lost everybody," she said. "This past week I lost my brother."

That could explain why Vanek dives into her philanthropic causes. In addition to music, she also lends financial and volunteer support to Interfaith Community Services, an employee scholarship program with Splendido and College of the Ozarks in her native Missouri, which gave her an honorary doctorate degree.

In addition to financial support, Vanek also has season tickets to the TSO, TCA and SASO. She quietly attends each event, greeting those who know her but mostly slipping unceremoniously into her seat to enjoy the music. Last year, she said, she attended 30 concerts, a pace she said she may not be able to keep up at her age.

Vanek didn't need any lunch invitations to include the TSO, SASO and TCA in her will. She has established endowments for each - SASO and the TCA's could reach $500,000 apiece before long, officials from both said - that will be paid when she dies. She also has set up endowments for College of the Ozarks, the scholarship at Splendido and Interfaith Community Services, among other nonprofits that will be remembered in her will.

"I'm hoping with what I have planned, (the endowments) will grow for each of the organizations," she said. "All the orchestras are in financial troubles. Everything I've given, I just want them to become better, mature and grow."

"Remembrance and Renewal: A Concert to Commemorate the 10th Anniversary of September 11"

• Where: Centennial Hall, 1020 E. University Blvd., on the University of Arizona campus.

"All the orchestras are in financial troubles. Everything I've given, I just want them to become better, mature and grow."

Dorothy Vanek was named 2010 Philanthropist of the Year by the Association of Fundraising Professionals Southern Arizona Chapter.

Halsey often wonders if they 'chose the wrong life'

Halsey often wonders if they 'chose the wrong life'

Philanthropist and arts patron Dorothy Vanek, shown in her Oro Valley home, paid for a piece by Stephen Paulus to commemorate the 10th anniversary of 9/11.