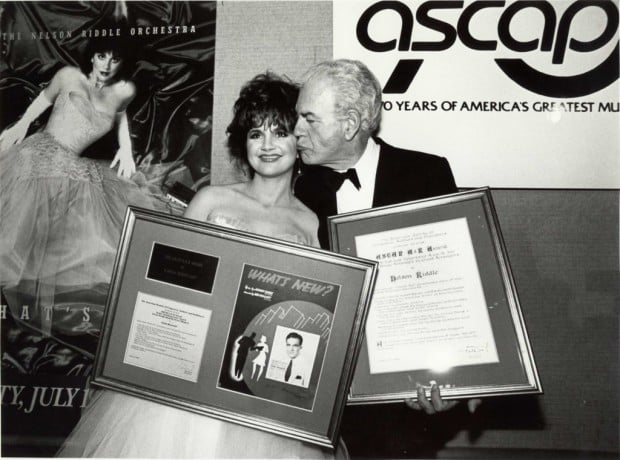 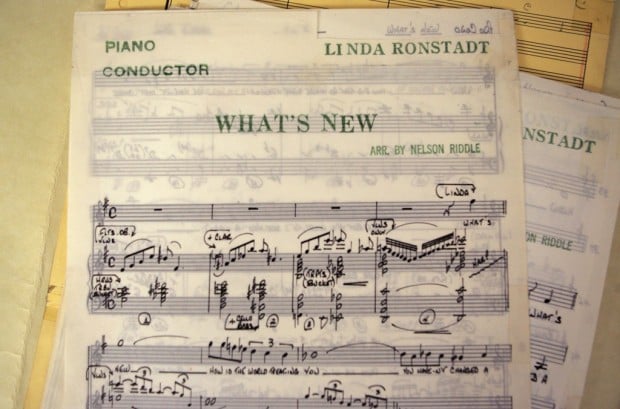 The hand-copied orchestra parts for "What's New" arranged by Nelson Riddle for Linda Ronstadt are among the memorabilia at the UA School of Music.
By Cathalena E. Burch Arizona Daily Star

We caught up by phone with the blissfully retired Linda Ronstadt Thursday to chat about the Nelson Riddle charts and memorabilia she recently donated to the University of Arizona School of Music. The collection includes Nelson's hand-written arrangements for music he recorded with Ronstadt in the early 1980s - three albums that gave the famed arranger his biggest commercial success and earned him two Grammys.

The UA has a growing collection of Riddle's catalog, much of it donated by his estate. Riddle's widow also endowed the Nelson Riddle chair, which is held by Thomas Cockrell.

Ronstadt said in the interview from her San Francisco home that the legacy of her collection "belongs 100 percent to Nelson. It was what he wrote for me, but I was lucky enough to be on the receiving end of that one."

How did it come about that you donated this to the UA?

"I retired and I have this huge room full of Nelson's charts. They're scored for 50-piece orchestra so every trumpet part, every violin part. I imagine 50 different parts for each song with a pretty big repertoire that included three albums. That would be 30 songs I guess. They're all sitting there, all hand-copied. Since Nelson has a chair at the university it seemed like that would be the right place for them to go.

"Nelson was the guy who absolutely wrote the book on putting jazz into the orchestra at the time jazz was at its height of influence in pop music. He was the guy who could put it into the orchestra without compromising either the orchestra or jazz. His arrangements that he did for Ella Fitzgerald and Frank Sinatra, Nat King Cole and everybody else in the world - Rosemary Clooney - were just state-of-the-art, beautiful jazz standards into the orchestra. Gorgeous orchestration. He's an arranger, but he's also a composer, too. When you do such extensive sound painting that's involved in the orchestra and these songs ... the person who wrote the songs is the composer, but the person who's writing the big orchestral arrangements gets to do a lot of his own composition. There's a lot of places where the orchestra takes big sound swatches and solos and bows and courtesies. There's a lot of stuff that he simply made up out of his own brilliant mind. I think that they're his legacy. Everybody agrees that he was the one that wrote jazz standards that fit the orchestra most successfully and was the first one to do so so completely successfully."

When you first approached Riddle, he reportedly didn't know who you were.

"He didn't know anything about pop music. He didn't like it, and who could blame him. He spent his whole life doing what he was doing and then rock 'n roll came in and shoved him out. Pop music that was jazz-influenced kind of collapsed during the 1950s and ‘60s, and that was too bad. It was kind of like throwing the baby out with the bathwater. There was a lot of stuff that needed to go. A lot of post-war stuff - "How Much Is That Doggie In the Window?", we didn't need that. But there were all those beautiful things written by Irving Berlin, the Gershwins, Rodgers and Hart, Hoagy Carmichael are just brilliant songs that were condemned to being in elevators going up and down. And that wasn't acceptable to me. Those songs are beautiful for singers. They gave me, for instance, lots more to do than a two-note Chuck Berry song. Chuck Berry is a really intelligent writer and writes beautiful stuff, but it's much more for a guitar player. ... There wasn't much room for me as a singer with my range and my voice."

When you proposed doing these Riddle records, people thought you were crazy.

"I just felt that I needed to expand as a singer, and I wasn't going to be able to unless I had music that would go where my voice would go. Those songs were so beautiful. They're exquisite. They're so multilayered. I think what the United States gave to the world at large culturally in the 20th century was the popular song. They were the best of the best popular songs, layered with irony and sentiment and social commentary."

In the couple times I've seen you perform the Nelson Riddle catalog, you seemed much more comfortable in your skin than when I've seen you do the pop material.

"I found my true voice when I went to sing that - that and Mexican music. With rock 'n roll I was singing it and I liked it OK, but that's not where my voice is seated. My voice is seated in a different place sound-wise. ... I could pound it into rock 'n roll because I knew the genre, but I was much happier flying along over Nelson's orchestra, singing with the mariachis. Much happier that way."

The UA School of Music says your contribution to its collections fills in a big piece of the Great American Songbook and the Nelson Riddle puzzle.

"For people who are big followers of that era and jazz and of Nelson's work, the great thing about Nelson was he was writing at the top of his talent when he died. ... He wrote brilliant things for Frank Sinatra, but the things that he wrote during my time - having nothing to do with me ... - the charts that he wrote for me are as good as any he wrote. He just kept writing great stuff year after year, whether he was in style or not. It didn't matter."

Those albums you did with him are really timeless.

"Well thank you. I've never heard them since I recorded them. For me, that stuff is always a work in progress. I learn and refine when I'm out on the road working it night after night. And I think I learned so much more about how to sing that stuff. In many cases it was the first time I ever sang it. Like ‘What's New' was the first take of the first time I'd ever sang that arrangement in my key."

So any plans to record anything else?

"I am 100 percent retired and I'm not doing anything any more. I'm at the ripe old age of getting to be 65 and I find that I don't have the power that I had and that's not worth inviting people to spend their money."

Are you enjoying your retirement?

Do you still split your time between San Francisco and Tucson?

The hand-copied orchestra parts for "What's New" arranged by Nelson Riddle for Linda Ronstadt are among the memorabilia at the UA School of Music.
© Copyright 2022 Arizona Daily Star, PO Box 26887 Tucson, AZ 85726-6887 | Terms of Use | Privacy Policy | Do Not Sell My Info | Cookie Preferences
Powered by BLOX Content Management System from TownNews.com.
You don't have any notifications.