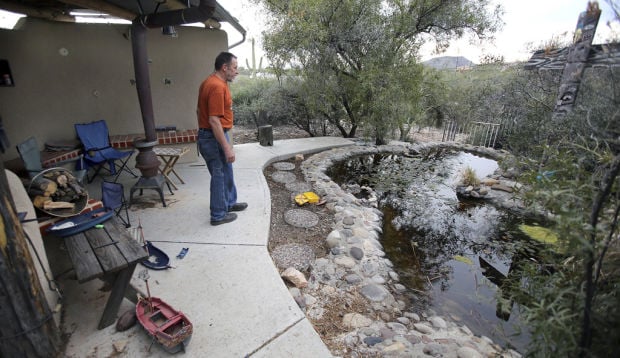 Mark "Eb" Eberlein, near a pond on his property, put a deck over the swimming pool and created a cistern that stores rainwater for a Painted Hills home's garden and desert landscaping. 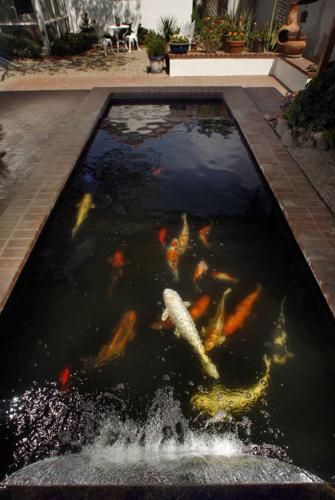 The koi pond in Red and Sue Redlaczyk's backyard doesn't appeal to all potential buyers. Sue Redlaczyk hopes buyers will see the pond as space that can be repurposed.

And while a pool is still at the top of the list for many Tucsonans considering a major home upgrade or house hunting, some are opting to fill in their pools for use as gardens, koi ponds, smaller water features, sunken patios, play areas or cisterns.

The reasons range from "I don't swim" and environmental concerns about chemicals and using too much water to seasonal visitors concerned about the cost of maintaining a pool that sits dormant most of the year, and the safety of children and pets.

"Most pools are over-maintained and under-utilized," says Jason Isenberg, owner and principal designer for Realm, a Tucson firm that does almost anything to do with the area outside Tucson homes and businesses. That includes, in the last couple of years, turning pools into gardens, ponds and kid and pet play areas.

Isenberg said a pool is no longer always seen as an asset. "We've actually had real estate agents come to us and ask for the most economic water-harvesting feature, whether it works or not. It's actually started to offer attractiveness to buyers," Isenberg said.

"Even when they are used, they're not used in their entirety," Isenberg says. "Not only does it eat up natural resources, (there is) exposure to chemicals, maintenance costs, and this usually massive thing eating up a large portion of your real estate. A lot of empty- nesters don't use them, and snowbirds don't use them a good part of the year. They're just sitting there dormant most of the year," Isenberg says.

It's still not a big part of Realm's overall business, which includes yard design and landscaping, along with water-smart xeriscaping, rainwater harvesting and shade structures to play areas, fire pits and outdoor kitchens. "In the past year we've probably done a dozen of them," he said. But the interest is rising, and Isenberg expects it to continue.

Converting a swimming pool to other uses isn't difficult, but there's more to it than getting a load of dirt and five friends with shovels on a Saturday afternoon. Isenberg says there are definitely wrong and right ways to do it - and it's a lot of work anyway. He said the bottom of the pool must be punctured so rainwater can drain through the rocks and soil used to fill it in, even if a plastic liner is used - as is sometimes done, particularly for conversion to use as a koi pond.

Isenberg favors boring clean core holes in the bottom of the old pool, making it easier to restore to swimming pool use should a future owner want to do that. Then crews lay down layers of large rock and top that will a layer of fabric made from a recycled material that will pass water, but not soil and other material from above that could clog the openings between the stones and the drainage holes. That's topped with soil that is compacted to a specific density so anything on top of that doesn't sink or settle. If it's going to be used as a pond, a plastic liner is used. For other uses - patio, play area or just reclaimed backyard space - the liner isn't necessary, Isenberg says.

Either way, the bottom of the old pool must be punctured. If you don't puncture the bottom of the pool and allow for drainage, Isenberg says, "you're going to have putrification of water and thus mosquitoes. It's going to be a mess."

Bruce McDonald of Tucson Koi & Water Gardens, 3372 N. Dodge Blvd., favors using the same specialized application concrete, known as gunite, used in swimming pools to form a shallower pond, since he feels that liners may leak and are tough to repair. But he, too, says the original pool bottom should be punctured to allow for drainage.

For conversion to use as a koi pond, McDonald says a shallower depth is usually required, because most pools hold too much water for an efficient koi habitat; a pool provides far more depth than the fish need and that means a lot more water to filter, increasing the cost to the operation. "The linings don't last as long as concrete. Most of the work we do is with concrete. It's a cleaner end product and more robust."

Attitudes toward pools may be changing, and there are more people who see the lack of a pool as an asset than in the past, says Tucson Realtor Jenni Morrison. But she said most people in the market for a $400,000- plus home still expect a house to have a pool.

Morrison should meet Sue and Red Redlaczyk, who have a 2,700-square-foot home with three bedrooms and two baths and an immaculate koi pond in the Sam Hughes Neighborhood near the University of Arizona. The house is listed for $479,900.

"We've had a lot of people who said they don't want the koi pool because it takes up space where they could have kids' play space," says Sue Redlaczyk. "It's mainly people who have kids. We have the big three-car garage that takes up a lot of space. So the yard itself wasn't all that big to begin with."

Still, the Redlaczyks hope to find a koi fancier or someone willing to convert the shallow (3-foot-deep) swimming pool pond to other uses. "They could have it as an all-brick patio if they wanted to, or turn it into a small play pool or spa," Redlaczyk said.

"I do think it's a very specific buyer. And you'll have the people who aren't into the koi or ponds who still find it an attractive feature to them," said Desiree Mooney of Coldwell Banker Residential Brokerage, the Redlaczyks' agent for their house. "It's so tranquil. You go into that backyard and you have no idea where you are, near the university in the middle of the city. You're seconds away from the city." But it does, Mooney said, "narrow the buyers' pool down."

On the other hand, Mooney says, the Redlaczyks know they are not going to recover the money they spent on the pond, and some buyers will see it as space they can put to other uses. The way Mooney looks at it, "it's a gorgeous home. And it has so many wonderful features," and she hopes buyers will see the pond as a free upgrade or space that can be repurposed.

While Mooney said it's not yet a trend to fill in a pool, she said she's handled three properties in the years she's been in real estate that have mentioned in their property disclosures that the yard contained a filled-in pool.

And, in general, she said, "I think people too are turning their yards into space where they can find peace and enjoyment. There isn't as much cash for people to go out and do the things they used to. So I'm seeing more people do things to their yards. I'm seeing more and more that they're putting more money into their yards more quickly. We're taking refuge in our own yards more than we used to."

Mark "Eb" Eberlein found another use for a pool he and his wife, Gwen, didn't want when they bought an otherwise great west-side house several years ago.

"My wife didn't even want to look at a place with a swimming pool, but I said there's all kinds of things you can do with a swimming pool. I decked it over. Now it's a cistern," Eberlein said, storing rainwater for their rambling Painted Hills home's garden and desert landscaping.

Eberlein said they hired a contractor to build a deck made of Trex - a popular colored synthetic wood made from recycled plastic - over the roughly 15-foot by 32-foot pool. A submersible pump feeds irrigation lines that exit the pool below ground level. Unless one noticed a small trap door, there's no indication there's anything there other than a large deck in the backyard between their vegetable garden and the house.

"It held as much as 20,000 gallons of water a couple years ago when we had a wet period. There's probably only 2,000 gallons in it now," Eberlein said.

"It's not completely sealed, as there are gaps between the decks' planks," Eberlein said.

"There are fish - mosquito fish, a little like guppies - in it so we don't get mosquitoes. But there's not enough light for algae to form."

Eberlein said they're satisfied with the results of the project, done eight years ago. Not only does it cut water bills and reduce the costs associated with having a pool, but he said it has helped them avoid some costly repairs, too.

"The pool was shot," Eberlein said. "When we got here, it was green" with algae.

Mark "Eb" Eberlein, near a pond on his property, put a deck over the swimming pool and created a cistern that stores rainwater for a Painted Hills home's garden and desert landscaping.

The koi pond in Red and Sue Redlaczyk's backyard doesn't appeal to all potential buyers. Sue Redlaczyk hopes buyers will see the pond as space that can be repurposed.