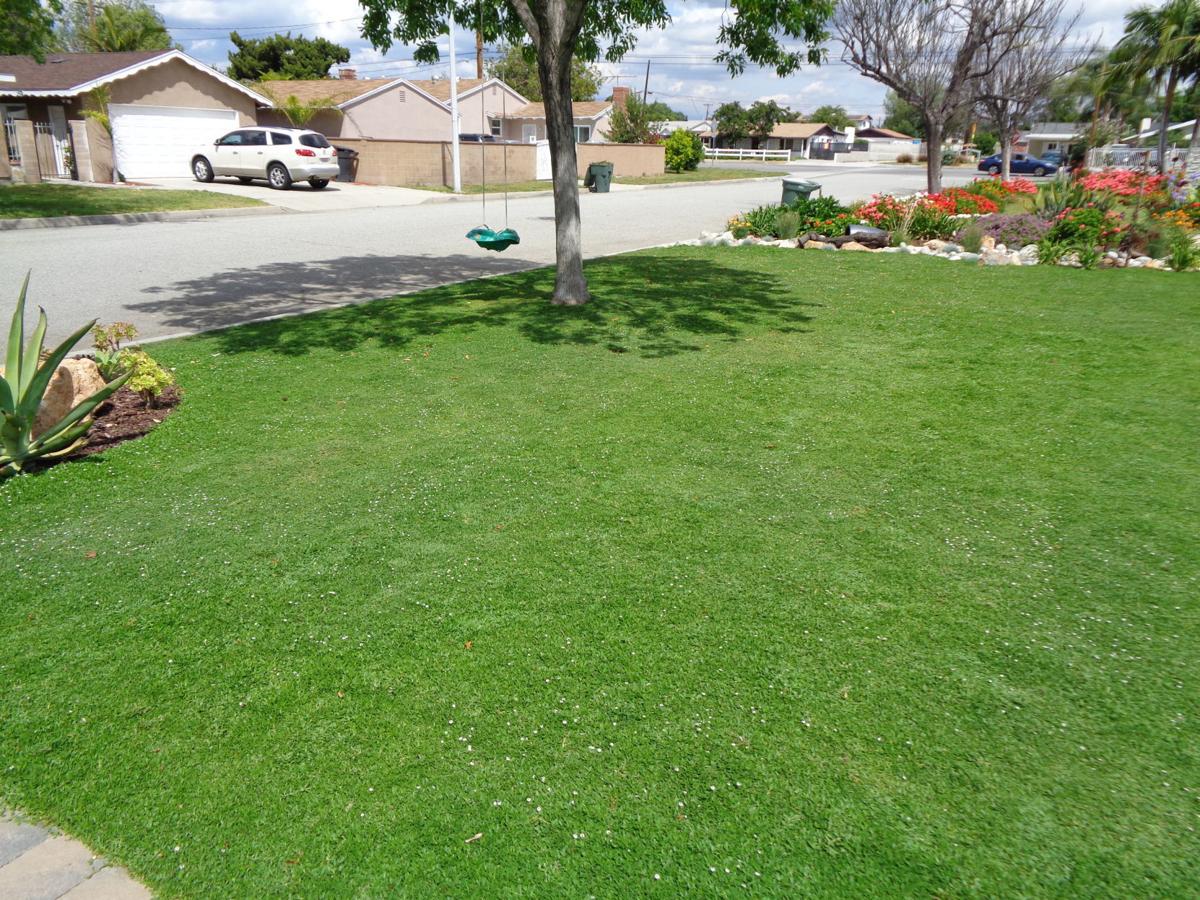 Kurapia, according to a UA study, stays green through the Sonoran Desert winter season even without irrigation. 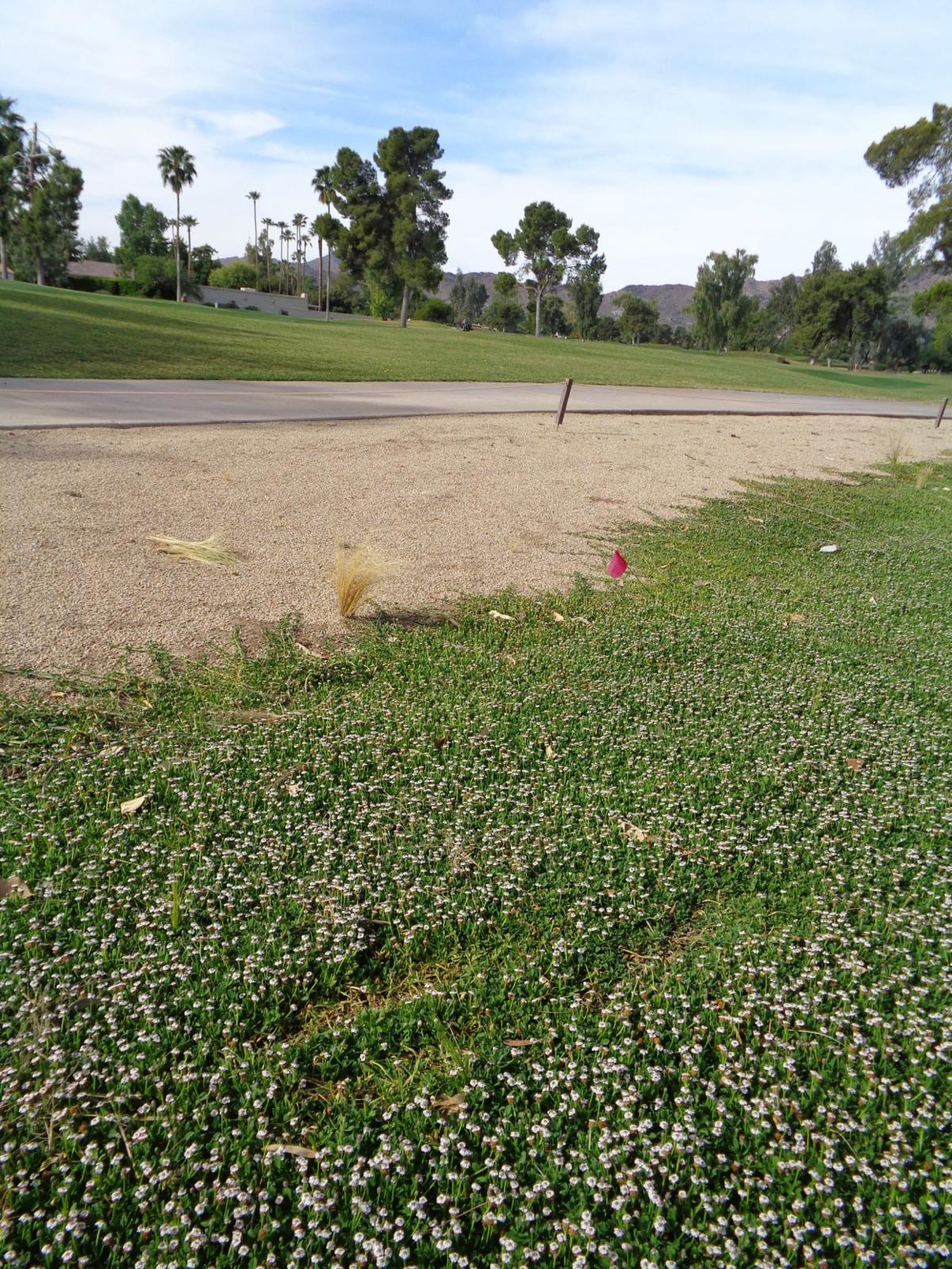 Bermuda grass or no Bermuda? If not Bermuda, then what?

A turf expert with the University of Arizona helps sort out the types of plants that work for lawns in Arizona’s climate and with irrigation concerns in mind.

Kai Umeda is a University of Arizona area extension agent in turfgrass science. He does research out of the Maricopa County Cooperative Extension office in Phoenix, a division of the UA College of Agriculture and Life Sciences.

Umeda says Bermuda grass is still the best for Tucson residential use.

“Bermuda is probably the most versatile grass we’ve developed,” he says.

It holds up to people and pet traffic. It handles drought and the high mineral content of our water.

Bermuda goes dormant in cool winter temperatures. That’s when many gardeners and landscapers overseed with rye to keep the lawn green. Umeda has a different suggestion if you want to cut back on irrigation. “Turf paints,” he says. “It’s just like overseeding without excess water use.”

He used turf paint in his own backyard. With one application in mid-autumn, he was able to keep the lawn green into spring. “Aesthetically, from a distance you can’t tell,” he says.

If you want to grow grass under the canopy of a tree or in other shaded areas, Umeda has a couple of suggestions.

St. Augustine grass feels very much like Bermuda, but can grow with only four to five hours of daily sunlight. It grows higher than Bermuda, so you may have to mow more often.

Consider using fescue grass to overseed shaded areas in the winter. It tolerates heat better than rye and uses about the same amount of water.

Umeda and UA research specialist Worku Burayu studied the use of nine native grasses and two non-native plants for turf in the Southwest.

Most native grasses are bunch grasses, which don’t spread into a groundcover. Native buffalo grass spreads like other turf grasses, although it has a rougher texture.

It provided some of the best lawn coverage among the native grasses in the study. It can handle Tucson native soil and, as a native plant, survives in drought.

“It goes dormant earlier in the winter and is slower to recover in the spring (compared to) Bermuda grass,” Umeda says.

The best performing plant in the study was Kurapia, a patented hybrid of Phyla nordiflora from Japan.

The grass, which is identified in the 2017 study as Lippia nordifora, uses less water than Bermuda, although Umeda says researchers are still trying to figure out if it is significantly less.

It survives the Sonoran Desert winters and stays green through the season even without irrigation.

“It’s similar to turf that would require water during the winter time if you were to overseed it,” he says. “You would save on that winter watering.”

Kurapia doesn’t grow very high. The only time you’d need to mow it, Umeda says, is if you wanted to remove the small white flowers that bloom from late spring through the summer.

Currently, Arizonans can purchase it only online. Commercial sod farms are starting production. As a sterile plant, it can only be installed as plugs or sod, not grow from seed.

Groundcovers such as dichondra, a perennial, and clover, a legume, can act like grass and are worth considering if you don’t have a lot of people or pet traffic, Umeda says.

Dichondra uses a little more water than turf grasses, he says, and does well in shaded areas.

Clover survives in the winter, but needs a lot of water to stay green in the summer, he says.

While Umeda says dichondra has limited use as a replacement for grass, homeowner Kimberly Waters is sold on the perennial of small, lily pad-like leaves.

Her small patch of dichondra in her eastside home backyard requires only a light watering with the hose once a week, and no mowing.

After seeing dichondra used as a lawn at a cat sanctuary at Mesquite Valley Growers Nursery, Waters decided to use it to replace a section covered with gravel and rock.

“I loved the look of it,” says Waters. “You don’t have to mow it and it’s low maintenance.”

The dichondra at Waters’ house stays green year-round in an area that gets from direct sun to full shade throughout the day.

She started the lawn two years ago by scratching the dirt with a rake, broadcasting the seed and covering it with soil to keep birds away.

She occasionally tosses more seed into bare areas. It is invasive and has started to take hold in flower beds next to the lawn and down a path of flagstone and pavers.

“This is a really good option,” she says.

Gardeners passionately disagree about whether grass lawns, which use a lot of water, are appropriate in drought-ravaged Southern Arizona.

Umeda understands the concern, but thinks there is middle ground.

Unless your landscape is full of native species, any plant you have will require extra water – a hibiscus, an ash tree or a citrus tree, for instance. Umeda says homeowners can trade high water-use plants for the lawn.

He also suggests planting a lawn with purpose. “If they install a minimum area of turf, ensure that what they are planting is what they’re going to be using,” he says.

Don’t grow high water-use grass in shaded areas that will require a lot of maintenance, he says. Instead, use plants that do well in shade. Or install synthetic turf. But don’t install too much.

“For small turf areas, I don’t see any problem with people putting an installation of synthetic turf,” he says. “Looking at a wide expanse, I have a problem with that.

“It’s absorbing a lot of heat.”

What nutrition experts have to say about Halloween candy

Gardening central to refugees building a new life in Tucson

On a recent hot, dry day, garden plots next to the midtown Literacy Connects building were full of tomatoes, amaranth, corn, peppers, onions, …

Want to leave a desert legacy? Grow a saguaro

Nancy Freeman learned to be a brave gardener — by growing 11 saguaros .

The Arizona Sonora Desert Museum is devoting its June 23 edition of Cool Summer Nights to pollinators.

There are several public gardens and parks in the Tucson area that help you understand what can grow in the Sonoran Desert.

While you and your plants are dealing with the heat, here is some reading material to get you excited for the next big planting season and beyond.

Hacienda shows how gardening can reduce anxiety, especially for people with memory loss

On this year's Bisbee tour, 11 gardens that feed the soul

This year’s slate of stops at the Sept. 1 garden tour by the Bisbee Bloomers illustrates how to make yards a joy to sit in, linger and relax.

What Robert Keith “Bob” De Armond couldn’t do as a career, he’s taken on as a hobby: Using his artist sensibilities to create a garden.

Now's the time to collect seeds from your summer garden

As the season winds down, you’ll have fewer chances to save seed.

Kurapia, according to a UA study, stays green through the Sonoran Desert winter season even without irrigation.