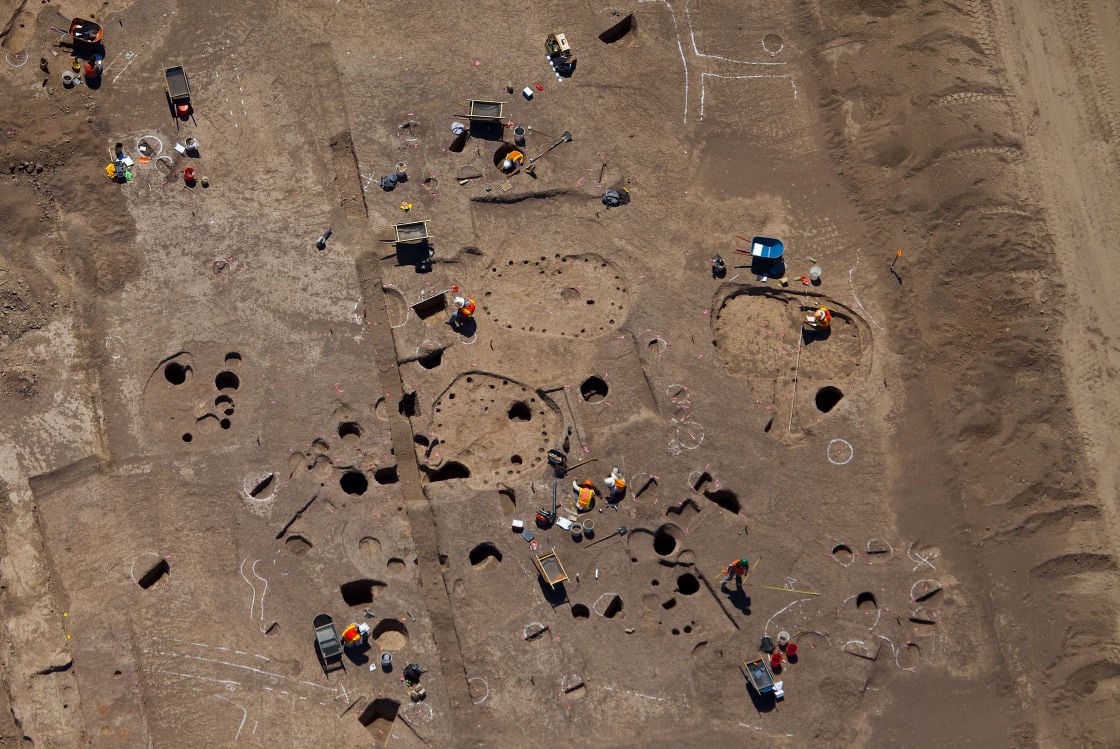 An aerial view shows pits for storage and cooking as well as the foundations of ancient pit houses. 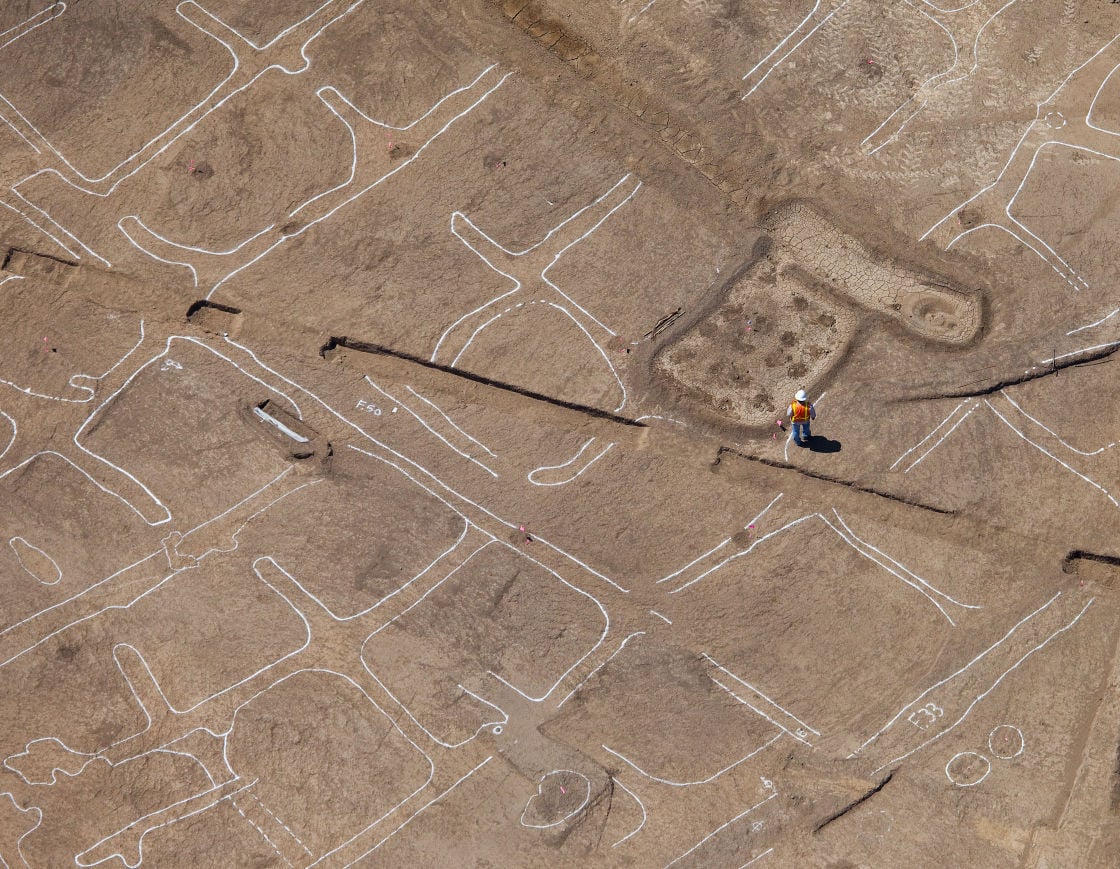 A person stands next to a reproduction of one cell in the prehistoric field system. Corn would be planted in that small area.

When Tucson was selected as the first U.S. Creative City of gastronomy by UNESCO last week, its long history of cultivated crops was cited as part of the reason for its designation.

Road builders, sewer plant operators and backhoe operators can share some of the glory, along with the archaeologists who uncovered evidence of early agriculture in the Tucson Basin, said archaeologist James Vint.

Vint, with Desert Archaeology Inc., said the digs required by law before major construction projects in recent decades unearthed evidence of a 4,000-year agrarian history in the Lower Santa Cruz that includes some of the earliest irrigated agriculture in North America.

One recent dig, done in advance of the expansion of Pima County’s Tres Rios Water Reclamation Facility at Ina Road, is adding immeasurably to our knowledge of our first irrigators and the roots of our gastronomic success.

Located just downstream of the confluence of the area’s three major watercourses — the Santa Cruz, Rillito and Cañada del Oro — the Las Capas excavation won multiple honors for the county and the archaeologists of Desert Archaeology.

When early results were first made known, Archaeology Magazine selected it as one of the Top Discoveries of 2009. This summer the project was honored by the Tucson-Pima County Historical Commission and the Tucson Historic Preservation Foundation.

Last week, Sarah Herr of Desert Archaeology traveled to China to present the firm’s findings at the Second Shanghai Archaeological Forum, which honored 11 research reports from across the globe.

Las Capas was “an unparalleled opportunity,” said Vint, who was project manager. He and field director Greg Whitney led a crew of up to 30 people on a 13-month mission to uncover the past before the county began building its sewer plant addition.

Using tools from backhoes to trowels, the team revealed an intricate network of canals and irrigated fields, built more than 3,000 years ago.

In addition to the network of fields, archaeologists cataloged 53 pithouses, thousands of storage pits and more than 113,000 artifacts, including human and animal burials.

At most digs, said Desert Archaeology’s founder and president William Doelle, crews make a fairly shallow pass through the few feet of soil that are about to be disturbed for road-building.

At Las Capas, where the county was sinking clarifying tanks up to 30 feet into the ground, the dig went deeper — up to 11 feet in some areas. He praised the county for its commitment to doing the $8 million job properly.

A crew of three backhoe operators scrape through layers of deep history, two-to-four centimeters at a time, using a sharpened grader blade developed by Dan Arnit of Innovative Excavation.

“He was able to use it as a huge trowel to expose very broad areas. That’s how we were able to see these fields and canals in plan view,” said Vint.

A larger trench revealed layer upon layer of sand deposits the archaeologists dubbed the “wall of knowledge.”

In it, they could read the history of seasonal floods that deposited layers of silt over many centuries.

They were even able to determine which watercourse contributed to them. The Cañada del Oro layers, for example, are “orange and sparkly,” said Sarah Herr.

The fields, based on estimations of their extent and the water flow available, would have supported a community of up to 125 people, Vint said.

They told him a story of early life along the Santa Cruz. He pictured a scene in early April:

“It’s starting to get warm. Spring rains have come and the weeds are up. It’s time to plant. The guy who regulates the agricultural labor gets everyone together to work on cleaning up the main ditch, which has filled with debris over wintertime.

“He makes sure the main canal is coming in and able to reach all the fields and prepares the head gate to makes sure the Santa Cruz will flow into the canal. The main canals brings water to fields, which are planted and maintained by individual households.

“There is a social structure. The ugly jargon we use is ‘heterarchy’ — a social organization where people assume roles of leadership for specific tasks.

“They are getting into being really anchored to place, no longer moving around the landscape, following the seasonally available wild foods.”

They still hunt with their “atlatls,” notched sticks that propel darts with stone points. The site contained remains of mule deer and bighorn sheep.

But most of the animal bone found at the site was from rabbits, who showed up to raid the fields and got clubbed for dinner instead.

Our early gastronomes might have eaten a stew of rabbit and the young greens of the amaranth, Vint said, with masa cakes made from the corn they grew — a short-eared popcorn variety.

The signature dishes of the later agricultural periods — squash and beans — had not yet appeared, but the wild amaranth and purslane, allowed to grow in the fields as the corn matured, would have supplied the nutrients missing from corn, he said.

The dig also found evidence of bottle gourd that could be used for storage and bowls. “This is before we had fired clay pottery,” said Vint.

It would have been a tough existence, Vint said, not an idyllic one.

The dig uncovered evidence of “a couple people stabbed with multiple projectiles and thrown into pits face-first. There was violence — skull fractures and defensive wounds.”

The full story of Desert Archaeology’s findings was published in book form this year by Archaeology Southwest.

Some artists, scientists don't see gulf between the two, offer bridge to others.

Planetary scientists say those bright spots on the 'other dwarf planet' are salts, not ice or alien civilizations with spotlights.

The UA Laboratory of Tree-Ring Research continues to mine its archive for scientific results.

UA astronomers take a hit for the rival team

A telescope operated by the UA in Hawaii must close to allow construction of the Thirty Meter Telescope on Mauna Kea.

Kathleen Koopman, a local artist, mounts plants onto archeological paper in the UA Herbarium. After she glues them, she puts them under two wo…

An aerial view shows pits for storage and cooking as well as the foundations of ancient pit houses.

A person stands next to a reproduction of one cell in the prehistoric field system. Corn would be planted in that small area.