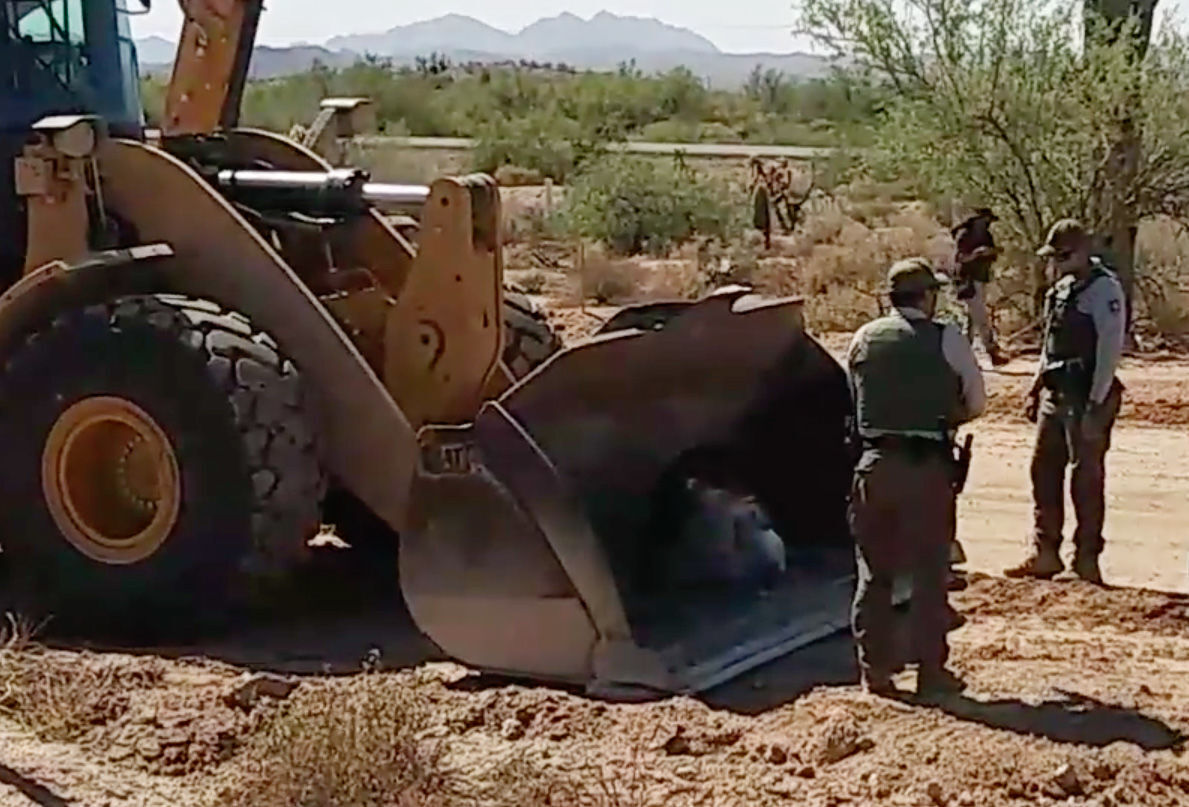 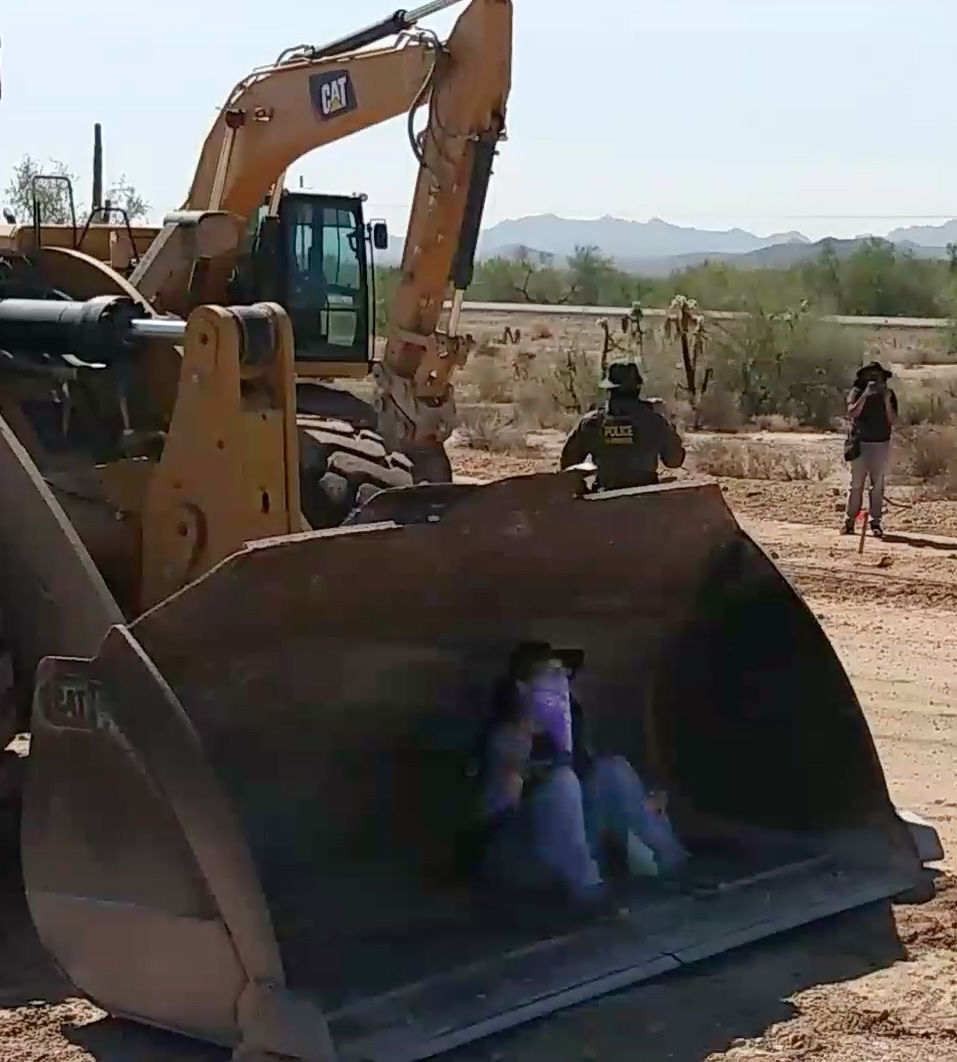 To stop wall construction near Quitobaquito Springs, O’Odham activist Nellie Jo David sat in the bucket of a front-end loader that was parked on a dirt road next to the border.

Two O’odham protesters were arrested Wednesday after they temporarily stopped border wall construction on their ancestral land southwest of Tucson.

The protest and arrests occurred at a construction site on Organ Pipe Cactus National Monument, about 150 miles southwest of Tucson, where contractors are building more than 40 miles of 30-foot tall steel border wall. In recent months, wall construction has moved closer to Quitobaquito Springs, an ancient watering hole sacred to the O’odham that has been drying up.

To stop wall construction near the springs, Nellie Jo David sat in the bucket of a front-end loader that was parked on a dirt road next to the border while Amber Ortega blocked traffic at the construction site, according to criminal complaints filed Thursday in Tucson’s federal court by a ranger with the National Park Service, which oversees the Organ Pipe monument.

“Go back home where you came from. This is our home,” one of the women can be heard saying on a video posted on Facebook. She told Border Patrol agents and a group of about 10 wall contractors standing nearby to “take your weapons of destruction out of here.”

Park rangers asked Ortega and David to leave the area multiple times, but they refused to leave or talk to the rangers, according to court documents. The area was closed to the public in October to make way for wall construction. Ortega and David face misdemeanor charges of violating a lawful order of a government officer and violating a closure order.

Until last week, protests of border wall construction in Arizona had largely been symbolic showings of opposition, such as gathering at the San Pedro River or protesting outside a company in Coolidge that manufactures wall materials. The protest near Quitobaquito Springs was the first attempt to physically stop wall construction in Arizona and the first time protesters were arrested.

A tribe in California temporarily blocked wall construction in July. Members of the Kumeyaay Nation, whose ancestral lands span the international border, stood in front of wall contractors east of San Diego to stop blasting and construction. Local media reports do not mention any arrests related to the wall protests near San Diego.

The protest near Quitobaquito Springs lasted about three hours, according to organizers with the O’odham Anti Border Collective and Defend O’odham Jewed, which includes members of the Tohono O’odham, Akimel O’odham and Hia-Ced O’odham tribes. The decision to block construction was a spontaneous reaction to the sight of heavy equipment near the springs, but they are planning more direct action to stop wall construction. The group set up an online “Defend O’odham Land Bail Fund” that has raised $39,000 from about 800 people.

David and Ortega were taken to Florence Correctional Center after park rangers arrested them during a demonstration in an area that was closed to the public, according to Vanessa Lacayo, spokeswoman with the National Park Service. No injuries were reported.

The Border Patrol’s Tucson Sector confirmed that agents assisted with the arrests and referred questions to the park service.

David and Ortega were released from custody Thursday evening, organizers with the collective said.

The arrests were made in an area that was cleared of vegetation for wall construction. Contractors moved hundreds of plants out of the construction zone, but they destroyed those that an environmental monitor said likely would not survive being transplanted. Among the plants were saguaros, which are protected by Arizona state law and considered to be people by the O’odham.

A National Park Service report in 2019 identified two dozen archaeological sites on Organ Pipe that will “likely be wholly or partially destroyed by forthcoming border fence construction.” Customs and Border Protection officials say they take precautions to ensure that does not happen.

A dozen miles to the east of the springs, contractors used explosives to break up rock on Monument Hill. Tohono O’odham leaders say bodies were buried on the hill after battles with the Apache.

Contractors are pulling millions of gallons of water from the aquifer to mix concrete and tamp down dust. CBP officials agreed not to drill wells within 5 miles of Quitobaquito Springs. In recent months, the water level at the pond fed by the springs dropped far lower than in past summers. The cause of the drop is complicated, experts say, and could include wall construction, long-term agricultural pumping, summer heat, and decades of decline in water flow from the springs.

The protests near the springs continued on Thursday, with protesters holding a banner reading “Border=Genocide” and “No Wall on O’odham Land,” according to a video posted on Facebook.

“What would you do if they came into your cemeteries and bulldozed your people?” one of the protesters asked federal officers and wall contractors. “How would you react as a family, as a person, as a human?”

“You all are temporary; We are permanent here,” the protesters said.

Law enforcement officers ordered them to leave the construction, which they did without any further arrests. They said they would return to protest again.

This video offers some pros and cons of online education, as many schools and universities have suspended in-person classes due to the spread …

These were the fifth detonations so far in the wall project on Organ Pipe Cactus National Monument.

The Arizona Department of Public Safety warned activists to clear the road before they moved in on the crowd, officials say.

The rising deaths is blamed on border security policies that have pushed migrants toward riskier routes into the U.S., this year’s harsh weather and COVID-19-related health restrictions.

The officials from Customs and Border Protection and Homeland Security were effusive in their praise of President Trump’s border policies.

The wall project near the ranch began in July. It involves building a 30-foot-tall steel wall on a 60-foot-wide strip of federal land that runs between the US-Mexico border and the ranch.

To stop wall construction near Quitobaquito Springs, O’Odham activist Nellie Jo David sat in the bucket of a front-end loader that was parked on a dirt road next to the border.