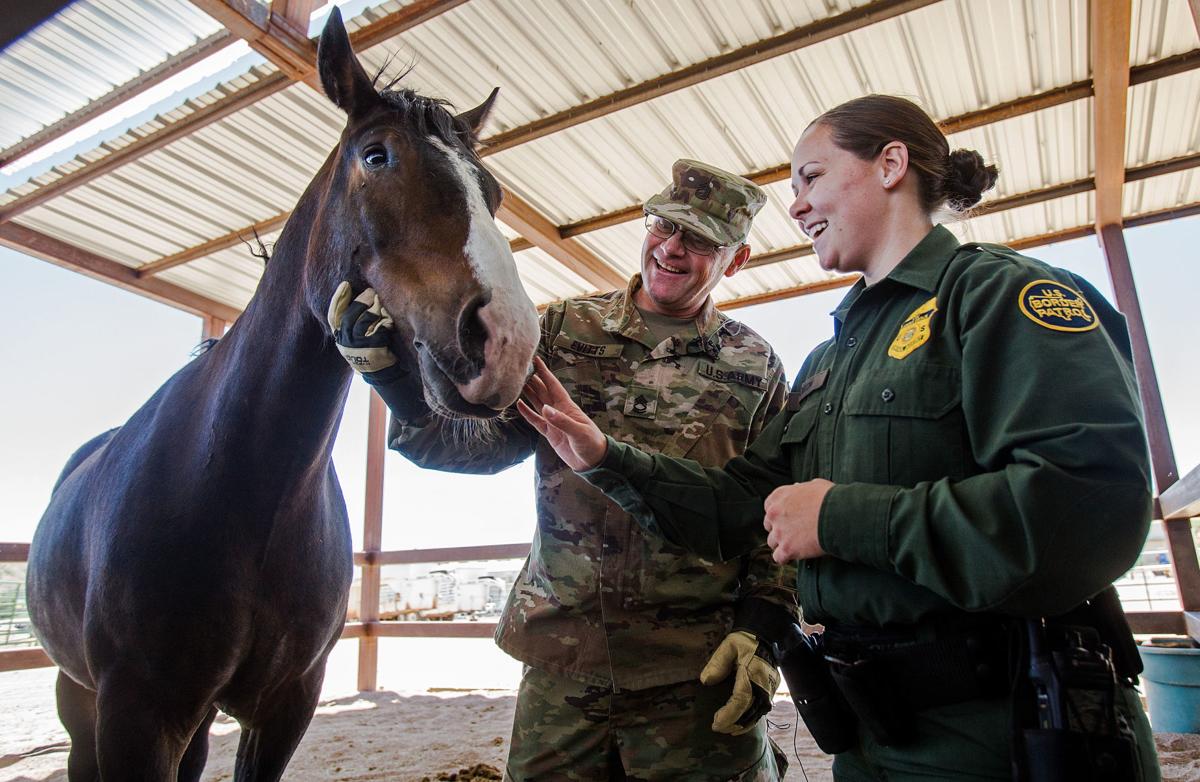 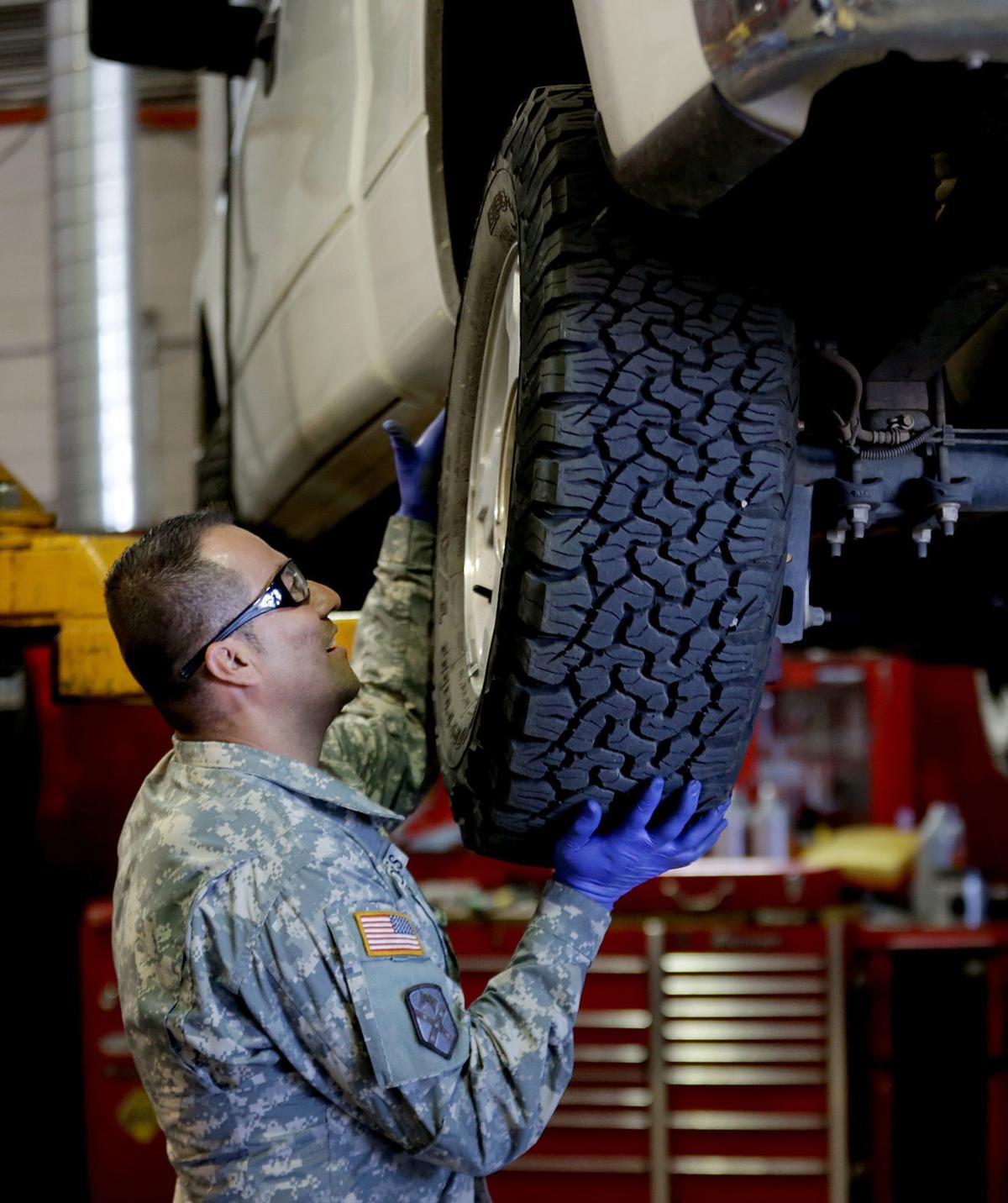 Sgt. Francisco Robles of the Arizona Army National Guard puts a tire back on a Border Patrol vehicle after maintenance in the garage at the U.S. Border Patrol Nogales Station, 1500 W. La Quinta Road, on May 23, 2018, in Nogales, Ariz. Arizona National Guard troops, deployed under Operation Guardian Support, are performing duties to free up Border Patrol agents for field work. 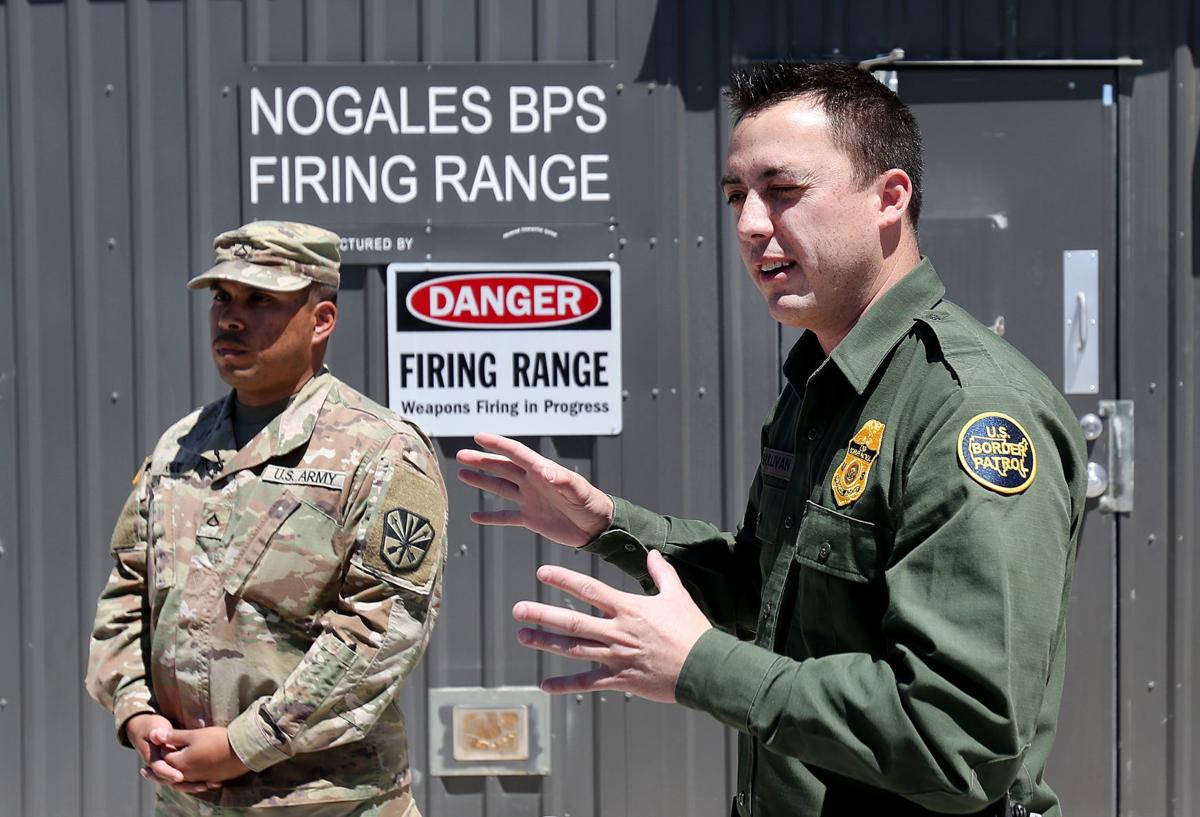 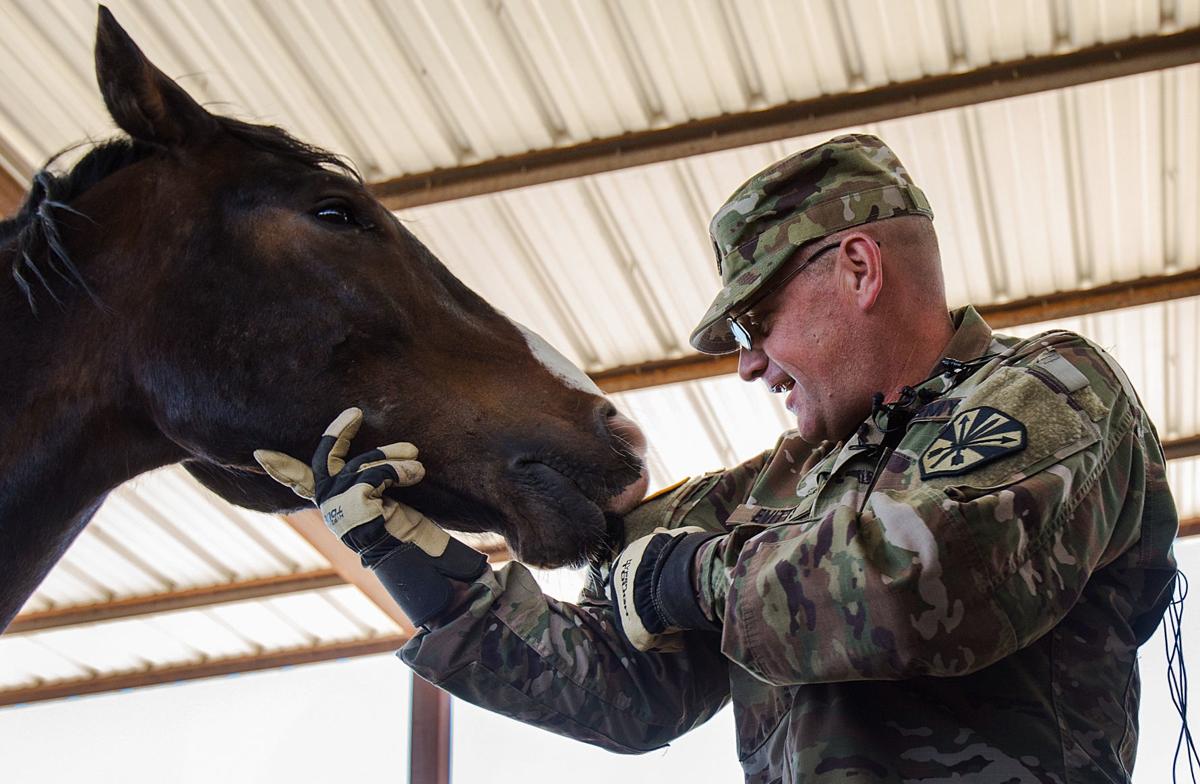 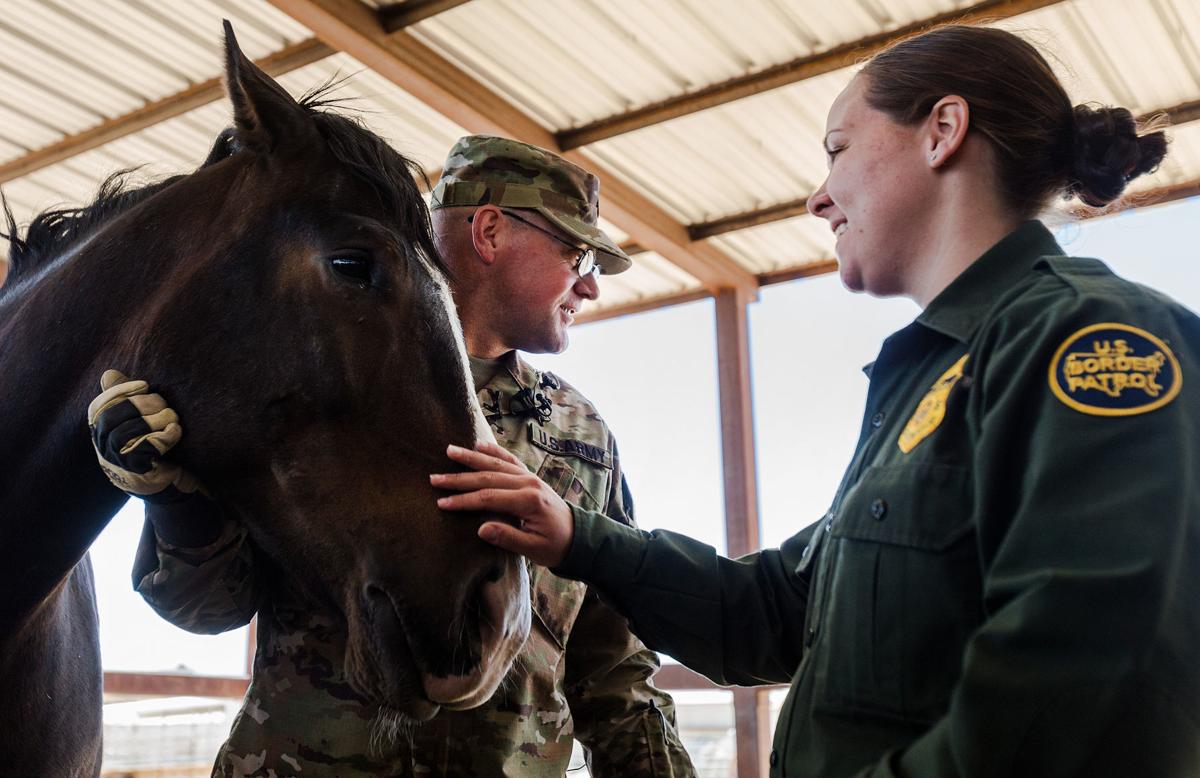 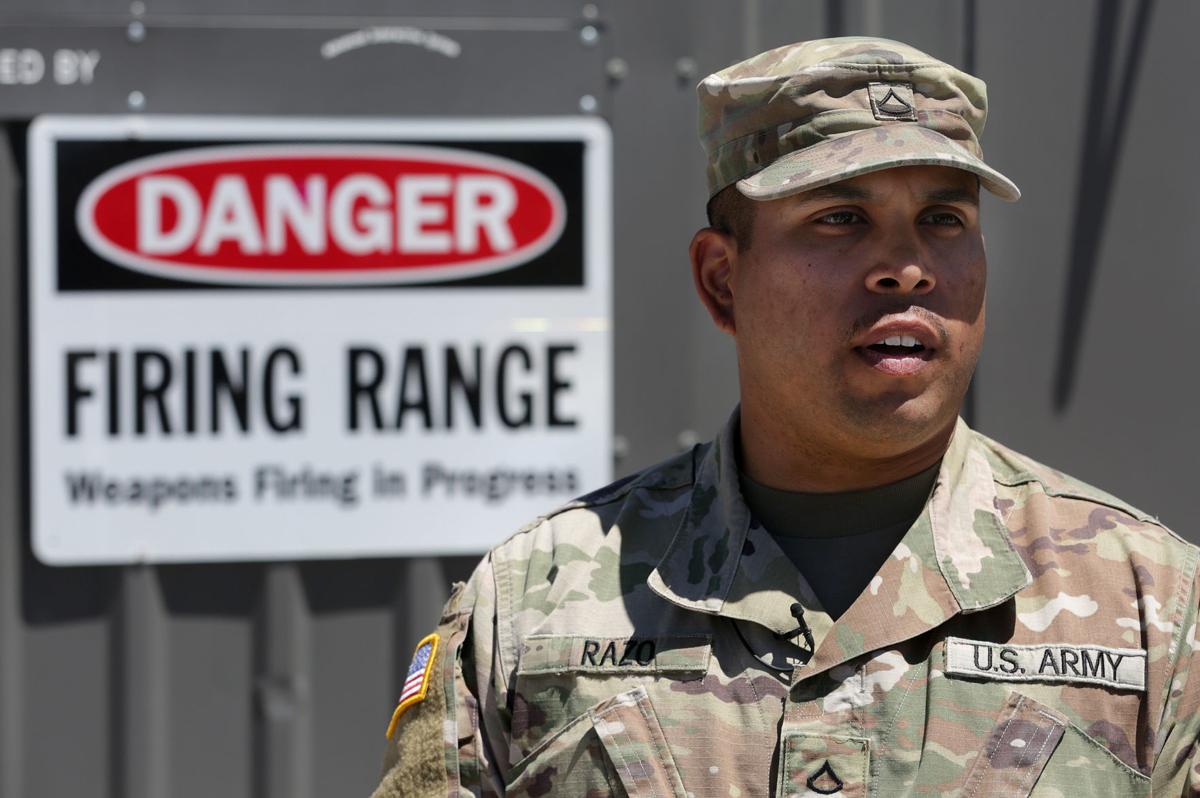 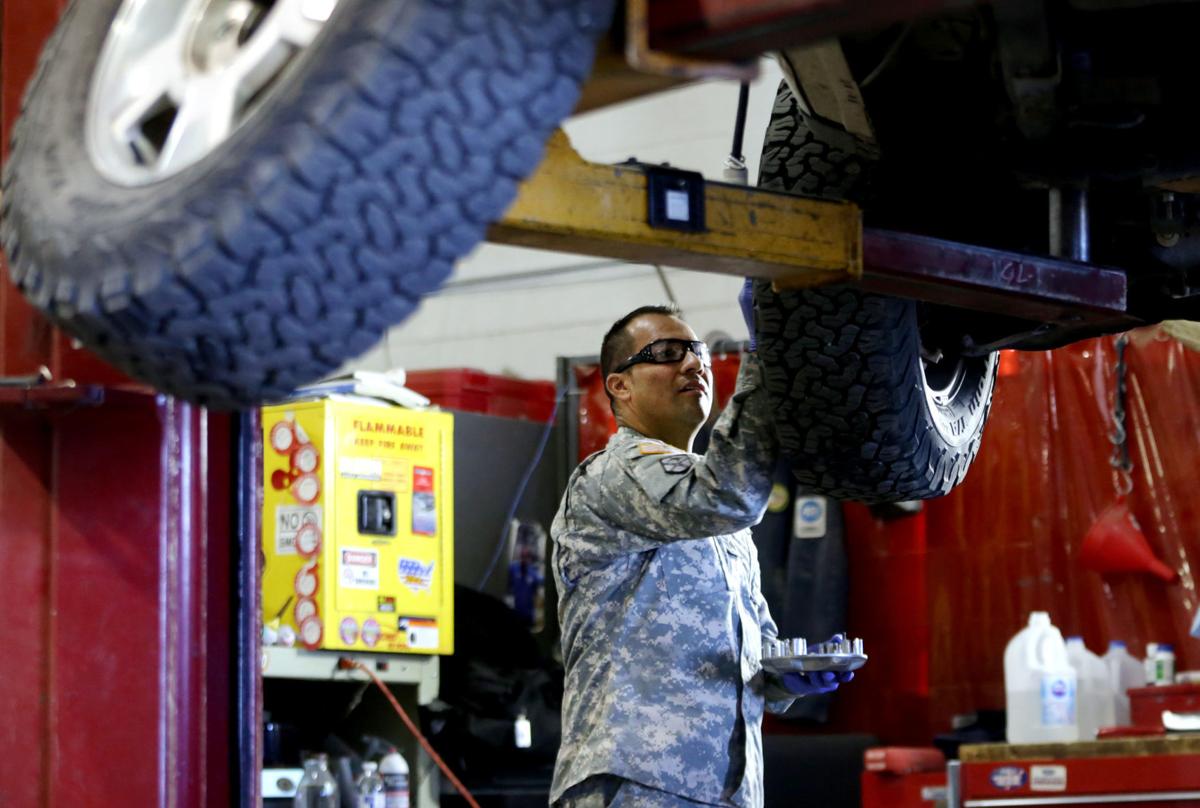 Sgt. Francisco Robles of the Arizona Army National Guard puts a tire back on a Border Patrol vehicle after doing maintenance work. 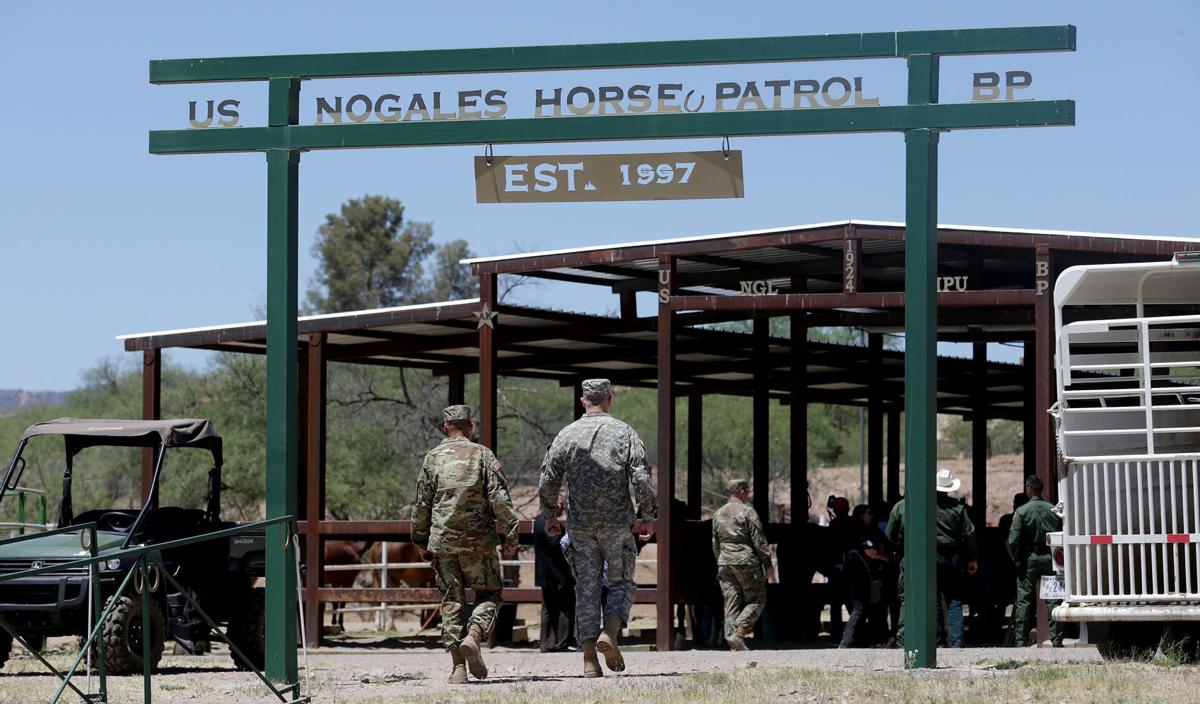 The current border mission of the Arizona National Guard is to help get more Border Patrol agents on the ground, but quantifying how many more is not that simple, officials said Wednesday.

“It depends on the task at hand. It’s not a 1-for-1 (ratio) in every case,” said Daniel Hernandez, a Border Patrol spokesman for the Tucson Sector, during a media tour of the various tasks the soldiers are doing in Nogales.

Last month, Gov. Doug Ducey announced the deployment of the National Guard at President Trump’s request. As of today, the Guard is authorized to deploy about 600 members through the end of the fiscal year on Sept. 30, said Capt. Aaron Thacker, a spokesman for the Arizona National Guard.

For instance, Thomas Evitts, a sergeant first class, is now tasked with caring for the horses in Nogales, relieving two Border Patrol agents who can now go out on patrol.

Evitts grew up around horses in Gilbert and now cleans the stables, makes sure the horses have food and water and that those like Cobalt, who is recovering from a torn ligament, have adequate care.

“I’ve always liked horses. My son has horses,” he told reporters. “I like animals.”

While he didn’t imagine he was volunteering to care for horses, he said he is used to performing a variety of tasks for the National Guard, which he joined in 2001.

He has 21 years total of service with the military, including two previous border-related deployments with the National Guard.

He was one of roughly 1,200 troops who were stationed along the U.S.-Mexico border in 2010-11, including about 500 in Arizona. Initially, the goal of Operation Phalanx, which cost $135 million, was to report unauthorized border crossings to the Border Patrol. It later shifted to aerial surveillance. Evitts was stationed in Nogales running operations.

Since the 1990s, the Arizona National Guard has had an ongoing role in fighting drug-trafficking through a joint task force, but “this one (mission) has broader capabilities,” Thacker said.

It is to allow more law enforcement to get out in the field while they hire more agents, he said. “We are not a long-term solution, we are just a solution for now. We are helping them get to where they need to be.”

What is a long-term solution?

“That’s beyond our scope,” Hernandez said, adding that’s for elected officials and the management staff to decide.

Even though the National Guard has been deployed only a few weeks, he can already see a difference in getting more badges back to the border.

While the two National Guardsmen are not necessarily replacing agents, Hernandez said their work helps there be a quicker turnaround for vehicles, which allows agents to get out to the field faster.

And there’s Scott Engels, 26, who used to be an artillery radar operator in the military and is now aiding with surveillance. The job is slightly different, but he said he is figuring it out. His task is to let agents know of any traffic he sees so they can deploy and make arrests or seizures.

Although troops are not allowed to do surveillance into Mexico, Hernandez said they focus on helping Border Patrol agents on the U.S. side of the border, and if they are limited in some way, officials can adjust and move them to a different location.

So far, Engels said he’s happy to work alongside the Border Patrol. “Even though we wear two different types of uniforms we can still do our best to serve and protect our country as best as possible,” he said.

The National Guard also has a state corrections officer who used to be a military police officer helping out with safety at the gun range for when agents have to do their routine qualifications.

“Having guardsmen in this mission is a very unique thing. Working with horses is not necessarily a MOS (Military Occupational Specialty). It’s not a job we train for,” Thacker said.

“If we bring active-duty guys here, kids who entered the military at 18 and learned nothing but that job, it would be quite the contrast,” he said. “Guardsmen bring a lot of their civilian skill sets with them and a lot of things they grow up with in this dual world of military and civilian.”

The idea is that with any task to which they can lend a hand, that could mean one more agent who is freed, they said.

“Not everything is measurable,” Hernandez said. “You look at how easy we can accomplish the job, the agents who are out into the field, or how quickly they can now respond.”

About 35 Guard members are staying at a hotel in Nogales, Thacker said. But depending on the longevity of the mission, they might contract with apartments to keep the costs down.

“We try to keep them in decent standard of living, but at the same time fiscally responsible by doing contracted housing to keep cost down,” he said.

In 2007, the Star reported the Army National Guard had spent at least $9 million in six months the prior year on food and lodging for the troops deployed to Arizona. While some of the money was spent on temporary lodging and lower-end places, it was also spent at places in Tucson’s Catalina Foothills, such as Loews Ventana Canyon Resort and the Westin La Paloma Resort and Spa. Officials said then that the discounted rate was within the government’s daily allowance.

Nearly 3,700 Border Patrol agents work in the Tucson Sector, the most in any of the sectors nationwide.

So far this fiscal year, agents here have made more than 30,000 apprehensions. Increasingly, apprehensions are of Central Americans, families and unaccompanied minors.

Agents in the Tucson sector were making nearly 400,000 apprehensions in the mid-2000s and about 200,000 in 2010 — during the previous two deployments. Still, Hernandez said agents here must cover 262 linear border miles of vast and at times unforgiving terrain — an area that includes the Tohono O'odham Nation, which is equivalent to the size of Connecticut.

"Having these guys here allows agents to be more readily available," Hernandez said. "Small contributions all over the place amount for one greater result."

Guard troops return to Arizona-Mexico border, but military's presence is not new

The Arizona National Guard has played a quiet role in border enforcement for nearly three decades.

Says there's been a 200 percent spike in border-wide apprehensions between March 2017 and March 2018.

Said her agency will use funding from fiscal years 2017 and 2018 to build 150 new miles of wall and refurbish fencing that needs upgrading.

For many that means supporting the leftist candidate, Andrés Manuel López Obrador, although others have doubts.

Missing migrants: "Impossible to not feel responsible to carry on the search"

Tucson's Colibrí Center for Human Rights has thousands of open cases of missing migrants. But it's running short of money.

Sgt. Francisco Robles of the Arizona Army National Guard puts a tire back on a Border Patrol vehicle after maintenance in the garage at the U.S. Border Patrol Nogales Station, 1500 W. La Quinta Road, on May 23, 2018, in Nogales, Ariz. Arizona National Guard troops, deployed under Operation Guardian Support, are performing duties to free up Border Patrol agents for field work.

Sgt. Francisco Robles of the Arizona Army National Guard puts a tire back on a Border Patrol vehicle after doing maintenance work.