Residents in the southern Catalinas between Catalina Highway milepost 3 and Redington Road were given evacuation orders Sunday night due to the Bighorn Fire, which surpassed 100,000 acres.

The northern and southern boundaries of the evacuation zone don't follow a specific road but can be found on the Bighorn Wildfire Alert Zones map, the Pima County Sheriff's Department said when issuing the alert.

The southern border runs straight east at a starting point near the Babad Do'ag Scenic Overlook the first scenic overlook parking area going up the mountain.

The northern border of the evacuation zone runs straight east of the Bud Spring Trailhead, just north of the Gordon Hirabayashi Recreation Area.

Redington Road is closed at the end of the pavement, the department said.

The Pima County Sheriff's Department has also designated the area directly south of the evacuation area as being in "set" mode, in which residents are urged to voluntarily leave or be prepared to evacuate if conditions change.

The red area south on the southeast end of the Catalinas was declared an evacuation zone Sunday evening. Areas in red are where an evacuation …

Wind on Saturday helped propel the Bighorn Fire to 104,000 acres and it continued to be a concern for firefighters Sunday, officials said.

Fire activity picked up on the southeast end of the fire over the weekend, Andy Huntsberger, operations section chief for the Northern Rockies Incident Management Team, said Sunday afternoon. Aircraft and hand crews worked to contain the fire east and southeast of Willow Canyon.

That fire growth is directly north of where the evacuation orders were issued Sunday evening.

“We really don’t want to see the fire continue to move to the south and then wrap around again,” Huntsberger said. “So we’re doing what we can to prevent that.”

Fire crews are also working on contingency plans farther southeast of the fire line in case the fire does spread in that direction, he said.

West winds push the smoke of the Bighorn Fire as it burns on the southeastern slopes of the Santa Catalina Mountains northeast of Tucson on June 26, 2020. The lights on the broadcast television and radio antennas of Mount Bigelow are just visible at right through the smoke. 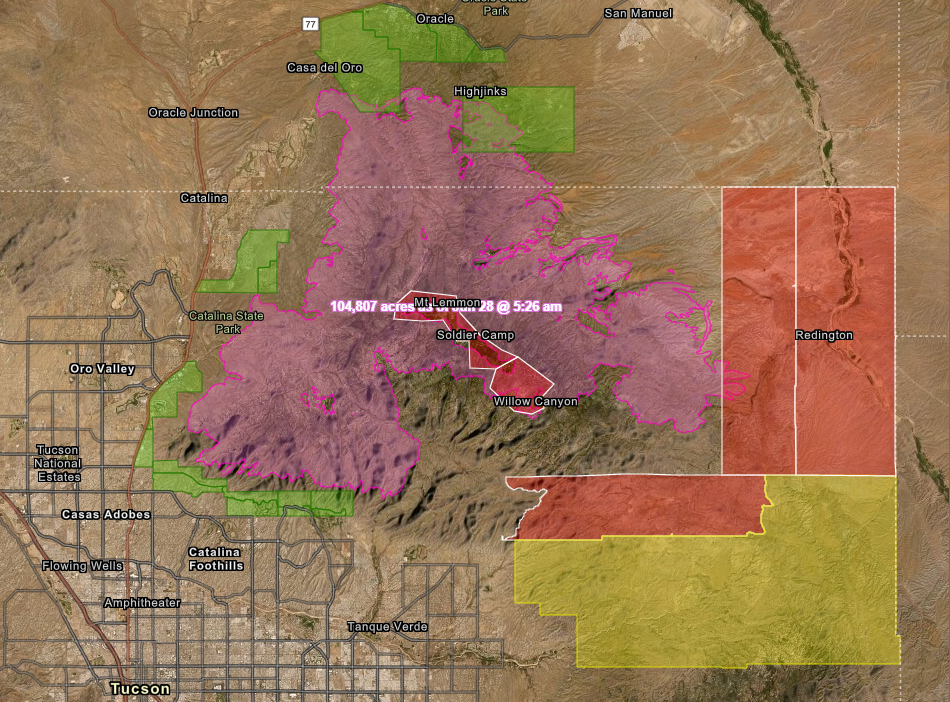 The red area south on the southeast end of the Catalinas was declared an evacuation zone Sunday evening. Areas in red are where an evacuation order has been issued, and areas in yellow indicate residents are urged to voluntarily leave or be prepared to evacuate.