The University of Arizona should pause its furlough plan set to take effect next week because the process has not been transparent in the decision-making or its implementation, a new campuswide coalition says.

Formed after the initial release of the UA’s furlough plan April 17, the Coalition for Academic Justice is made up of several hundred graduate and professional students, staff and faculty.

Their requests to the administration include a plan that shifts more of the cost-cutting load to employees making more than $150,000 a year and an independent audit of the past three years of spending by the UA to see if alternative cuts can be made to save money.

“There’s very little representation of staff and faculty, and the makeup of these working groups is not very diverse in terms of ethnic and racial makeup,” said Celeste Bustamante, an associate journalism professor and coalition member, about the UA’s Financial Sustainability Emergency Response Taskforce that was implemented in late March. The task force is made up of seven groups assigned to address all operations at the UA, from athletics to capital projects.

“That Working Group includes key members of faculty and administration. The group has worked to create recommendations that help mitigate the financial cliff we are facing while attempting to lessen the impact on any one individual, and that included doing all they could to avoid layoffs,” said a statement released Wednesday by the UA. 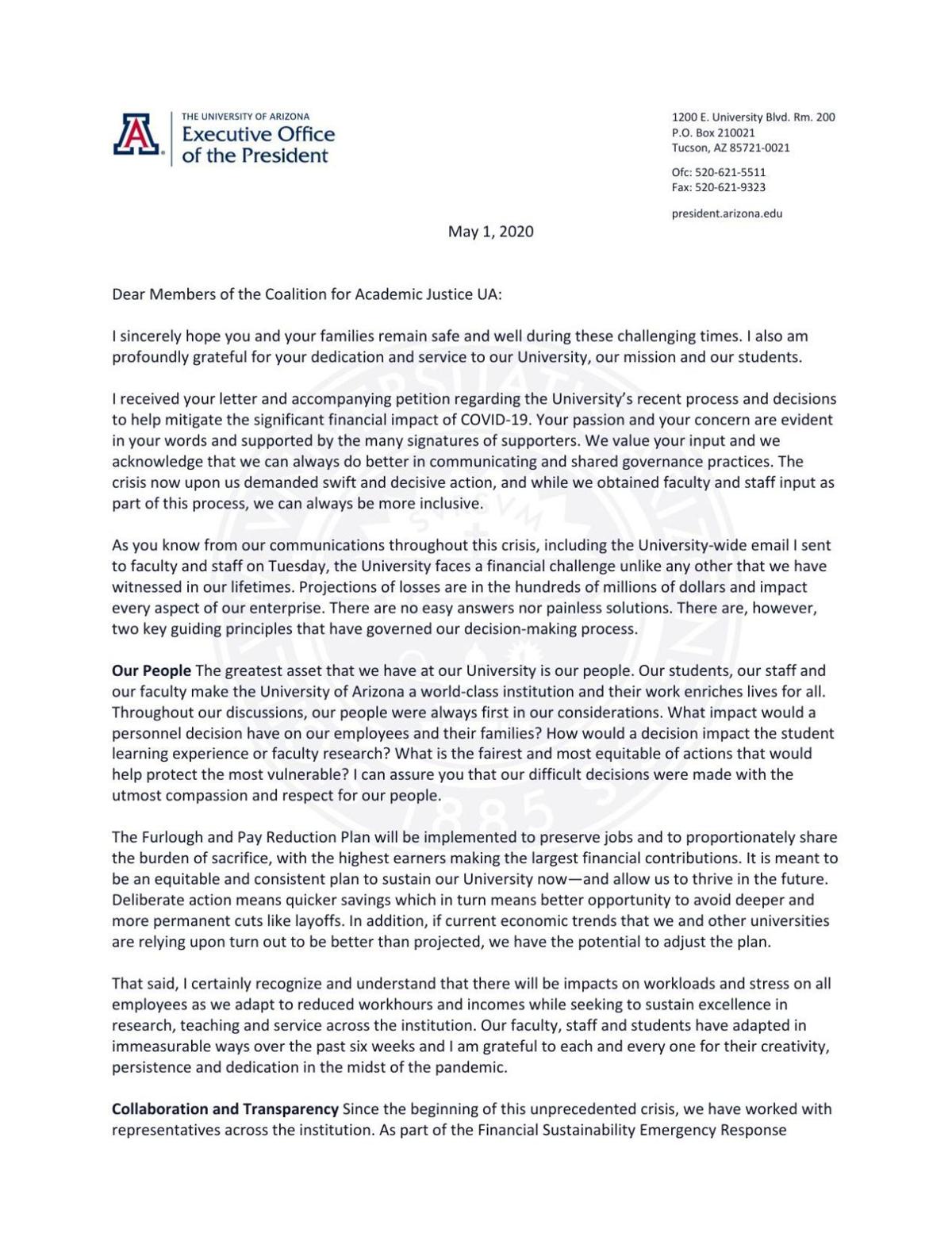 Those in grant-funded research positions, student workers and graduate assistants were already made exempt from the pay cuts in the plan, the UA said.

The coalition is calling for a halt so the administration can address possible alternatives to the current furlough plan that will still meet the UA’s savings target of $90 million to $95 million. The UA says it anticipates losing upward of $250 million through the 2021 fiscal year due to expenses and losses related to the coronavirus pandemic.

Bustamante said another possibility could be adjusting the “floor” of the program to those making at least $75,000 a year instead of the current $44,500.

“We have these top administrators making decisions that affect the rank and file and staff across the university, so that the people who are making the most at the institution are making all these decisions, and we don’t have a clear understanding as to how the process is working within these working groups. There hasn’t been a lot of transparency with that and the whole process,” Bustamante said.

An audit of the UA’s past dealings may shed light on where funds have been spent, according to Bustamante.

“We would like an outside — meaning nonstate agency — to audit exactly where funds have been directed over the past three years,” Bustamante said. “Maybe we could see what the university has been doing and perhaps other places where savings could be made that have not been discussed.”

The coalition is a group that cares “very deeply about the future of the university and the quality of education that we are going to be able to provide,” Bustamante said.

“That’s why we’re doing what we’re doing. It’s not that it’s anything personal against whoever at the top; we want to be part of the conversation because we are most interested in having the best university in the future when we come back.”

Most Tucson area bike shops are open as "essential services."

The man was found after police responded to a welfare check in a midtown apartment, officials say.

The number of confirmed coronavirus cases across Arizona is 9,945, the Arizona Department of Health Services said.

Coronavirus cases in Arizona, mapped by county: May 7

With coronavirus a continued threat, plans are being made for how on-campus housing and learning will look at the University of Arizona in August.