The new guidelines include stricter building height limits and distancing restrictions for previously excluded neighborhoods south of Broadway and west of Campbell. Above, a construction crew finishes up work on a business entrance along East Broadway in one of the new zoning sections. 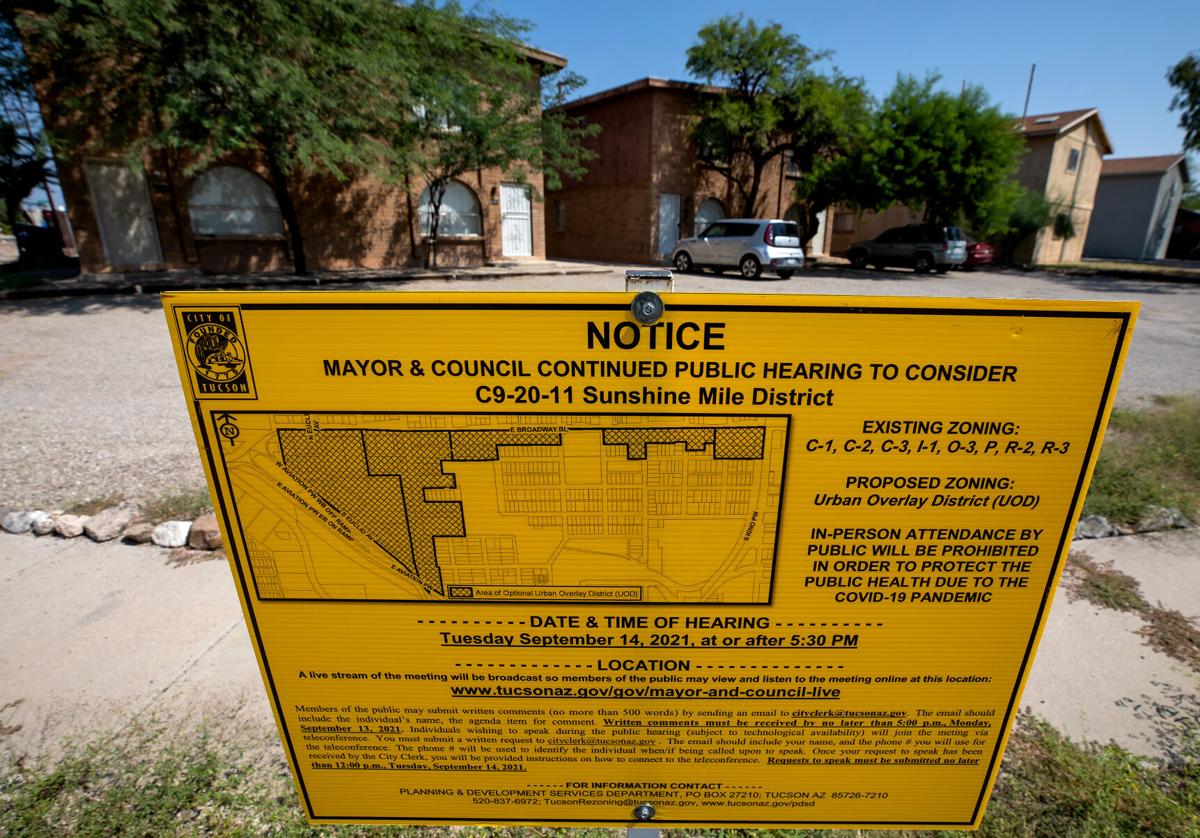 The Tucson City Council approved special building rules Tuesday in new parts of the Sunshine Mile, a major step in the yearslong effort to revitalize the 2-mile-long section of East Broadway between Euclid Avenue and Country Club Road.

The action adds previously excluded neighborhoods to the revitalization project spearheaded by Rio Nuevo, a state-funded entity in downtown Tucson that invests in community development.

Project goals include preserving and repurposing historical buildings, as well as creating opportunities for future development through the implementation of an urban overlay district in the area. The overlay is designed to incentivize local property owners to offer services that are within the public interest — like affordable housing units or off-street parking — in return for looser zoning rules, which could allow them to build taller buildings, for example.

Most of the Sunshine Mile has been encapsulated by the overlay district since July, when the first iteration of the ordinance was adopted by the City Council, but some neighborhoods in Ward 5 were excluded after residents raised concerns that included building size and location issues.

The decision followed months of community outreach by city and Rio Nuevo staff, and marks the full incorporation of neighborhoods along the Sunshine Mile into the revitalization project.

“This is probably one of the (largest) outreach projects in the history of the city,” said Fletcher McCusker, the chair of Rio Nuevo’s board of directors. “We’ve had hundreds of meetings and charrettes and walkarounds and Zoom meetings during the last year and a half to make sure everybody had a chance to have some input.”

Despite the public outreach, community members raised additional concerns during the public hearing held ahead of the vote.

The primary complaint was about the increased building height the new zoning could allow, which community members said has been a point of contention throughout the process along with the potential for increased traffic in affected areas.

Rio Nuevo reduced the height limit from 16 stories to six in some commercial areas to address these concerns in previous months, according to McCusker. But some public hearing participants requested that the ordinance be adjusted to further limit the number of stories allowed in their neighborhoods.

Councilman Richard Fimbres echoed those request by introducing a motion that adjusted the building story cap from six stories to four in a sub-district near Park Avenue along the Sunshine Mile.

The Ward 5 councilman also requested that staff members provide a report to the council on projects that use the ordinance over the next 1½ years.

McCusker said the new zoning is expected to go into effect within 30 days, after which developers can take advantage of the overlay district incentives in the newly incorporated Sunshine Mile neighborhoods.

He added that Rio Nuevo is already in conversation with developers about the “adaptive reuse” of historical buildings preserved as part of the program.

Several big road projects in Tucson are scheduled to finish up in 2021. Road Runner gets you up to date on where they are and when they'll be completed.

Although three county supervisors have endorsed Tucson's ballot initiative to raise the minimum wage to $15 an hour in the city, support for a county-wide minimum wage increase seems to be minimal on the board.

The new guidelines include stricter building height limits and distancing restrictions for previously excluded neighborhoods south of Broadway and west of Campbell. Above, a construction crew finishes up work on a business entrance along East Broadway in one of the new zoning sections.