A DEA agent was killed, another was wounded along with a Tucson police officer in a gunfight Monday morning aboard a train that stopped in Tucson, officials say.

Meanwhile, Tucson police say, one suspect was killed and another is in custody.

Gunfire erupted around 8 a.m. on the Sunset Limited 2 during a brief stop in downtown Tucson.

Part of the shootout between a gunman on the train and a law enforcement officers was captured on a camera near the platform for train buffs that's run from the Southern Arizona Transportation Museum.

Few details about the shootout have been released.

It occurred during a drug operation involving the Counter Narcotics Alliance squad, a multi-agency group that often conducts routine drug sweeps on trains and other transportation facilities.

A witness who was on the train said he watched the exchange of gunfire between a man and an officer who had a police dog on a leash.

"I was caught in the cross fire," said George Gonzales, a passenger. "It's like the OK Corral gang when I woke up in the morning."

Gonzales said after some shots were fired, he could hear an officer telling the gunman to surrender. He also said he could hear someone screaming in pain from a nearby train stairwell and assumed it was a shooting victim.

Alice Robinson was in the dining car eating an omelette when she said the "weird stuff started."

Robinson said she ran to a window after a couple eating near her said they heard gunfire. Moments later, several passengers ran through the car trying to get out, she said.

Evan Courtney was in a lounge car when people suddenly came running in yelling: “Shots fired!”

“I grabbed my backpack and ran,” Courtney told The Associated Press.

He said he huddled with other passengers while looking out the window. He saw several tactical police officers with assault rifles behind barricades. After 15 minutes, “police ran to us and told us to get out of the car and run in the opposite direction.”

Courtney later tweeted a photo of nearly two dozen officers, including one embracing an Amtrak employee.

The train arrived in Tucson at 7:40 a.m. carrying 137 passengers and 11 crew members. They were all evacuated to the station. None of the passengers were wounded.

There are no reported injuries to those who were onboard, according to an Amtrak spokesperson who said the company is in contact with local and federal authorities about the incident.

A second Drug Enforcement Administration agent and a Tucson police officer were wounded in the gunfight. One suspect was killed and another man has been arrested. 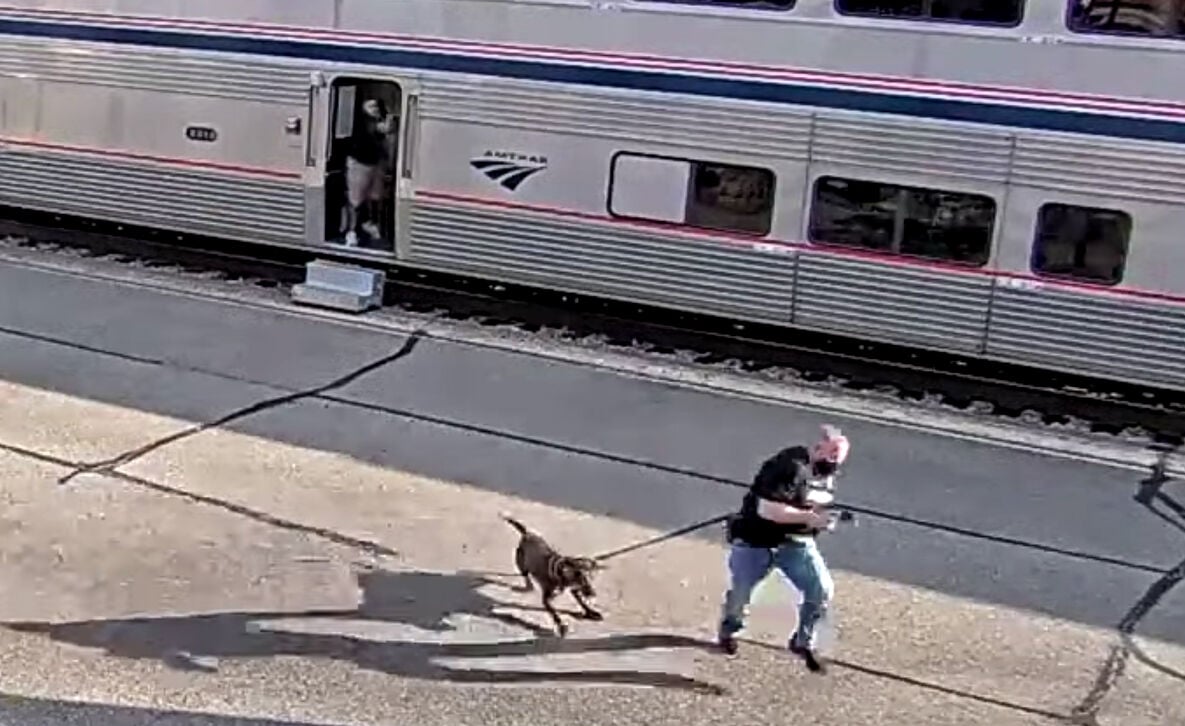 As seen in a still taken from a web camera, a police officer runs for cover with his K9 at the Tucson Amtrak station as a suspect emerges from a stopped train and opens fire. 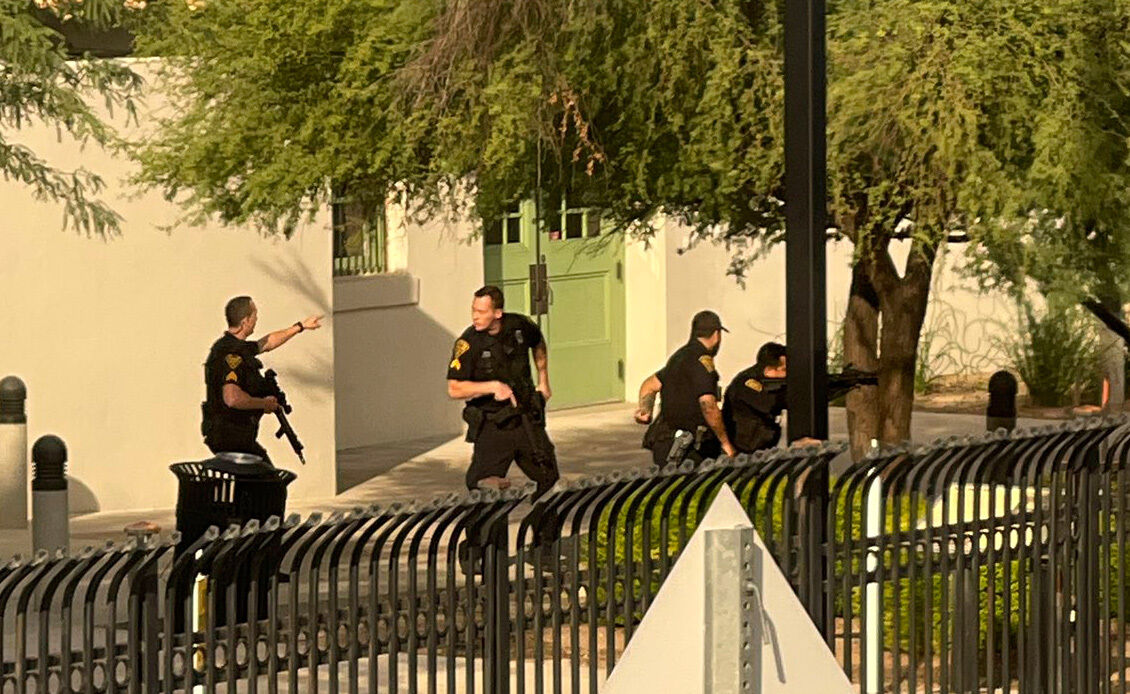 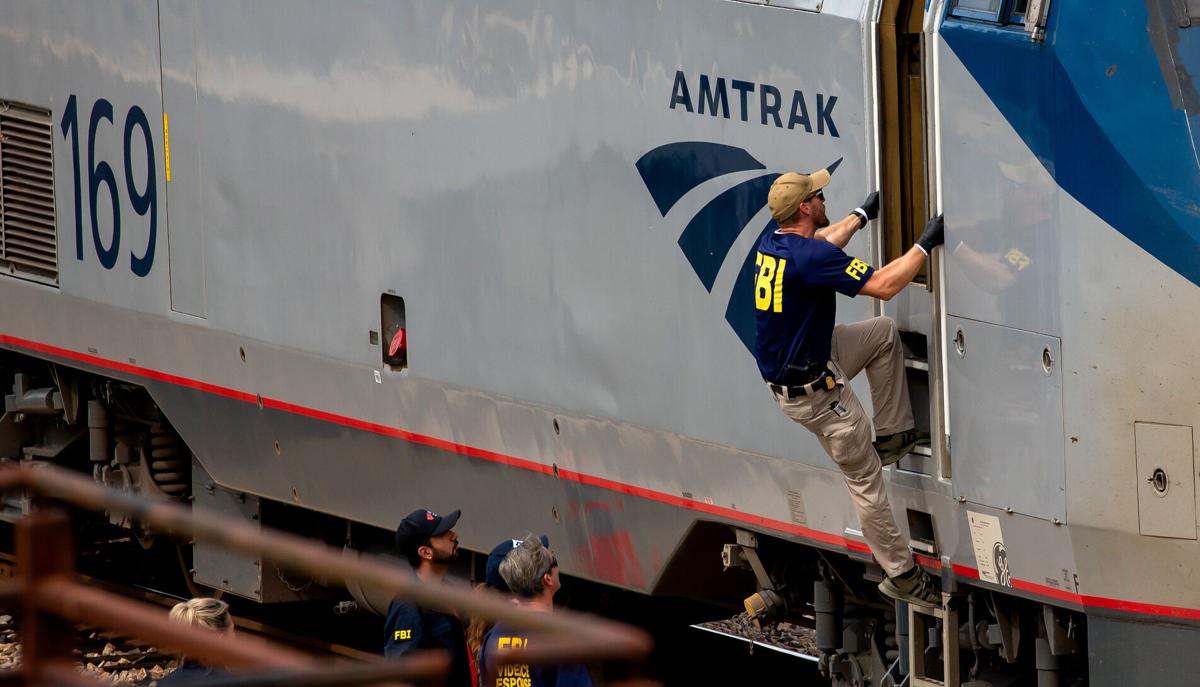 An FBI agent boards an Amtrak train after a shooting aboard the train in downtown Tucson on Oct. 4th, 2021.

Federal Bureau of Investigation evidence response team at the scene of a shooting Amtrak train in downtown Tucson on Oct. 4th, 2021.