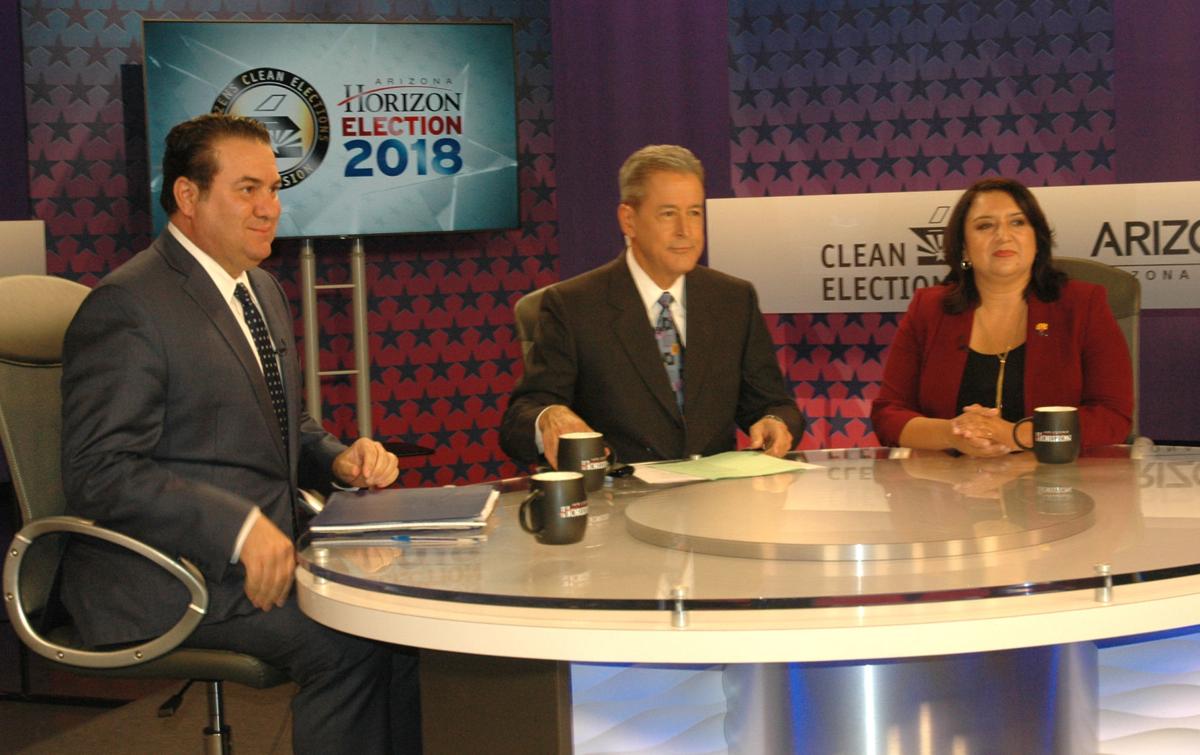 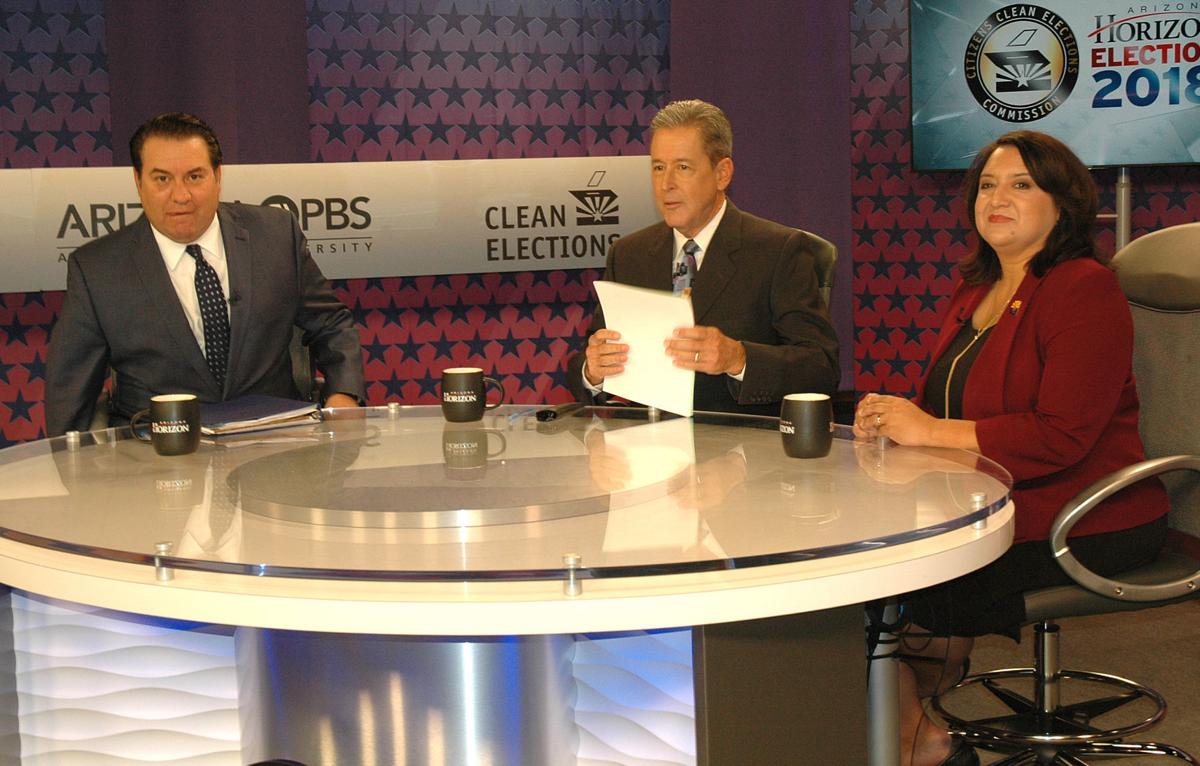 Mark Brnovich and January Contreras faced off Wednesday night in a televised debate for attorney general; KAET host Ted Simons is in the center of the photo.

PHOENIX — Attorney General Mark Brnovich found himself defending decisions he made to challenge various federal laws, challenges that his Democratic foe said worked against the interests of average Arizonans.

During a televised debate Wednesday evening, January Contreras lashed out at Brnovich for working to overturn a decision by the Obama administration to put about 1 million acres of federal land near the Grand Canyon off limits to mining. Federal appellate judges did not agree with Brnovich.

Brnovich has had no better luck in joining with other Republican attorneys general to overturn the Affordable Care Act and its mandate to provide coverage for pre-existing conditions.

Brnovich also sided with Americans for Prosperity in challenging a California law that would require the organization, part of the Koch brothers network, to disclose its donors.

All that, Contreras charged, showed that Brnovich during his four years as attorney general has been more interested in pursuing cases that helped special interests than those that help average Arizonans.

Brnovich shot back that Contreras, who was assistant attorney general under former Gov. Janet Napolitano, a Democrat, would follow her own political agenda if she was in charge of the office.

His prime example was the challenge his office filed against Maricopa County community colleges over the decision to charge resident tuition to students accepted into the federal Deferred Action for Childhood Arrivals program, which protects from deportation people who were brought to the U.S. as children without legal immigration status.

“I would not have litigated that case,” Contreras conceded. She said that’s because she believed those students were entitled to in-state tuition if they met other Arizona residency requirements.

Contreras pointed out that those accepted into DACA, known as “dreamers,” were entitled by the federal government to not only remain in the United States but also to work.

But Brnovich said that ignores the role of the Attorney General’s Office.

He pointed out that Arizonans voted by a 2-1 margin in 2006 to spell out that any person who is not a U.S. citizen or legal resident, or is “without lawful immigration status,” is ineligible to be charged the same tuition as residents at state colleges and universities.

Ultimately the Arizona Supreme Court sided with Brnovich and concluded that DACA recipients are not entitled to resident tuition.

As to the other cases cited, which Brnovich pursued and lost, the incumbent defended his decisions.

Take the mining case, where he supported a challenge by the National Mining Association to the 2012 decision by the Obama administration to put a 20-year moratorium on new mining claims around the Grand Canyon. The Interior Department said that would provide the time to study the effects of new mining on the environment, particularly water quality.

Contreras argued that Brnovich was choosing the wrong issues and the wrong side.

“You look at the separation of kids and parents at the border” by the Trump administration, she said, noting that some attorneys general — but not Brnovich — went to federal court to protect the constitutional rights of those involved.

“What is alarming to me is how often, in the cases I’m talking about, it’s aligning with political donors,” she said.

The question of money and politics spilled into the decision in August by Brnovich to alter the Secretary of State’s Office’s description of Proposition 127, a mandate that utilities use more renewable energy. He added language that some considered to be unfair and uneven.

Contreras charged that Brnovich was influenced by money that Pinnacle West Capital Corp., the parent company of utility Arizona Public Service, has given to the Republican Attorneys General Association; the association, in turn, helped Brnovich get elected in 2014 and is spending money on his re-election campaign.

Brnovich responded that California billionaire Tom Steyer, who is financing the Prop. 127 campaign, is now funding a $3.6 million media campaign urging Arizonans to turn him out of office. He called such out-of-state influence to help Contreras win the race “improper.”

“I think it’s funny coming from you,” Contreras responded, “when you have Arizona in a California courtroom defending the secrecy of donors to the Koch brothers network.”

In that case, Americans for Prosperity sought to overturn a California law that requires certain nonprofit corporations to submit on a confidential basis a report of their large donors to that state’s attorney general as part of enforcing its laws governing tax-exempt groups.

While Arizona was not affected — and Arizona has no similar laws — Brnovich submitted a brief urging the 9th Circuit Court of Appeals to rule that California had no “legitimate governmental interest” in such a mandate.

Brnovich said even if he did take positions on these cases, that doesn’t reflect the vast majority of how his office has operated.

“My opponent wants to point out one or two or three cases,” he said. “We have almost 500 lawyers in our office. What we do touches people’s lives every day.”

The group's ire is over wording the Attorney General's Office added to the description of Prop. 127 that will appear on the ballot.

January Contreras: We must live the Declaration of Independence

Claim forms for VW settlement being sent to 11,000 Arizonans affected by scandal

There's also a wide-open race to fill Southern Arizona's Congressional District 2 seat, with four Republicans and four Democrats each hoping to get their party's nod.

Arizona Board of Regents want Brnovich's case to be thrown out.

Surge of web traffic ahead of Arizona voter registration deadline

PHOENIX — The state website that is the main way people sign up to vote in Arizona saw a major surge in traffic ahead of the registration deadline.

Rain expected late tonight in Tucson, temperatures in the 70s

I hope you're excited for the rain.

Authorities have identified the cyclist who was fatally struck by a wrong-way driver on Tucson's "A" Mountain Thursday morning, according to police.

While more Arizona schools received top rankings, there was also a slight increase in the percentage of campuses receiving grades of D and F.

With the holiday season right around the corner, JCPenney is looking to hire more than 200 seasonal employees in the Tucson area.

McSally says Trump will come to Arizona in the coming weeks

The surreptitious recording of the candidate for the open Arizona U.S. Senate seat  is from 2011. It was released Thursday on Twitter by The Reagan Battalion, an anonymous conservative group.

The driver fled from the checkpoint but was stopped a few miles away.

It was a surprise move by Republican Attorney General Mark Brnovich.

Brnovich filed suit as an individual, not in his official capacity as Arizona attorney general.

Millions pumped into fight for, against Arizona's renewable energy proposition

The initiative would require utilities to obtain half of their power from renewable sources by 2030.

Lots of outside cash helping candidates in Arizona races

And that doesn't count the spending that state law allows to be kept hidden.

Used his inaugural speech to point to issue where he differs from governor.

Mark Brnovich and January Contreras faced off Wednesday night in a televised debate for attorney general; KAET host Ted Simons is in the center of the photo.