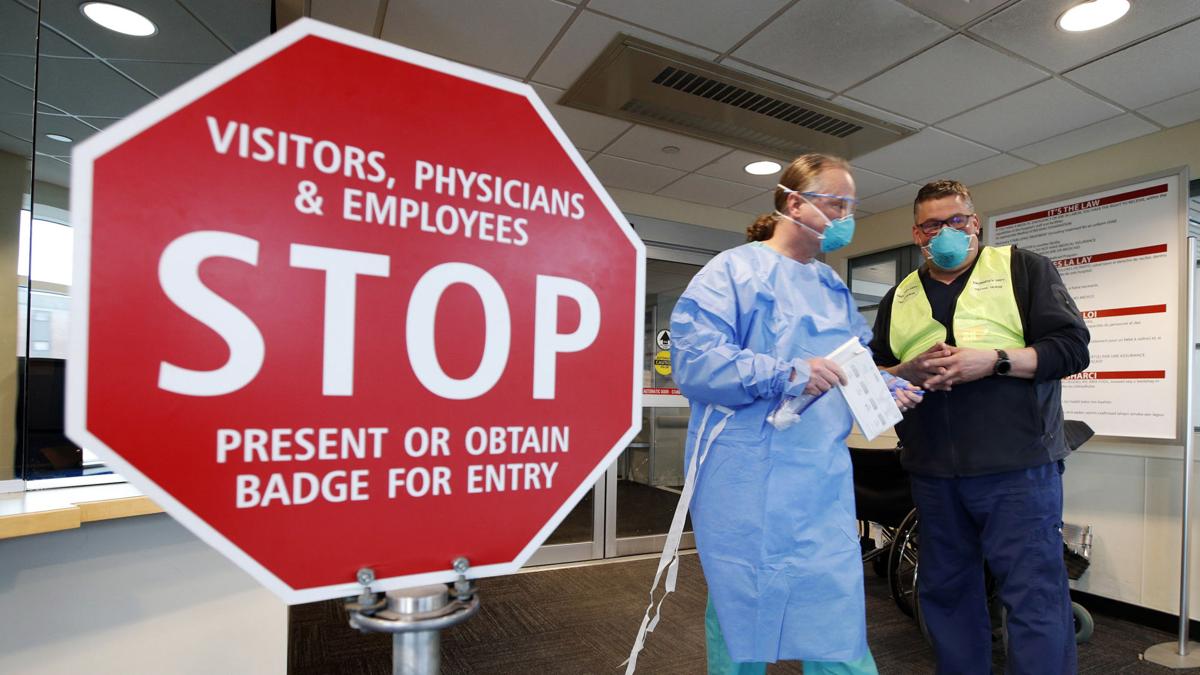 Medical personnel discuss patients that had been admitted for testing for the coronavirus at the entrance Central Maine Medical Center on Friday, March 13, 2020, in Lewiston, Maine.

This electron microscope image made available by the U.S. National Institutes of Health shows the Novel Coronavirus SARS-CoV-2. Also known as 2019-nCoV, the virus causes COVID-19.

She died less than an hour after being rushed to Tucson Medical Center.

Her illness kept getting worse over a few days. She tested negative for the flu and then eventually found out she had pneumonia. A lung X-ray prompted her doctor to order a COVID-19 test.

Three days later, her test result came back positive. And within minutes of arriving at the hospital, the 54-year-old woman became Tucson’s first known coronavirus-related fatality.

“She’s not just a statistic,” said the woman’s niece Olivia Meza Cannito. “She’s a human, she’s a mother, a daughter, a sister and an aunt. She was everything.”

The family, worried about the stigma attached to people who catch a disease that’s so easily transmitted and has prompted cities across the world to shut down, asked that the woman’s full name not be used in this story. The family members now find themselves in home quarantine.

They asked that the woman be identified by her last name, Anderson.

She worked as a receptionist at a pediatric clinic on the city’s east side. Her family said all she ever wanted to do was help people and she was particular about doing things to stay healthy. She was also diabetic, which put her at a higher risk for developing more severe symptoms associated with the virus.

When she started to develop a fever on March 15, Anderson immediately made an appointment with her doctor. Her family said she wasn’t experiencing any cough or shortness of breath at this point.

On March 19, her doctor ran the flu and strep tests that came back negative, and did a chest X-ray. The next day, the radiology report showed that Anderson had pneumonia. Her doctor was concerned that the infection patterns on her lungs were consistent with coronavirus.

“She thought it was pneumonia and she just complained of back pain,” said her sister Melanie Meza.

On Monday morning, Anderson received a call from her doctor saying that her coronavirus test was positive and that she should go to the emergency room right away. By now, she was having more trouble breathing.

Her husband drove her to Tucson Medical Center.

By the time she arrived, Anderson’s family says, her airway was so constricted she couldn’t be intubated and there was a lot of pressure in her abdomen.

Despite efforts by the staff to resuscitate her, Anderson died within an hour of her arrival.

“There wasn’t enough time to say goodbye,” Meza said. “We thought she would go to the hospital and come back.”

“She was a fighter. And she never gave up. And this is the thing that beat her,” Meza said. “I don’t want it to end this way. I want her death to mean something and help show Tucson what is happening and the severity of it. This is serious.”

In addition to three siblings, Anderson is survived by her husband and two children, who are both young adults.

Although no one else in the family has developed any symptoms, the woman’s children and husband are now under quarantine and must stay that way for at least 14 days after her death.

Meza Cannito said the lack of physical contact with relatives and friends has made this time of grief even more difficult.

“They’re not able to see her to say goodbye,” she said. “It’s not like the hospital is going to hold the body for two weeks, you know, so it’s been very tough on them.”

Now that social gatherings are limited to under 10 people, the family doesn’t think they’ll be able to have a funeral any time soon.

“She was a very outgoing person. She had this amazing smile, beautiful eyes and she loved life. She loved her children,” Meza said. “She was the oldest of four and she led the pack and was always looking out for everyone.”

When asked about any concerns they have from this experience, Meza said the need for better testing procedures is apparent.

“If you’re going to do a COVID-19 test, you should know immediately,” she said. “My fear is that the test result was sitting in the office when they were closed over the weekend.”

Working in a pediatric clinic, Anderson could have contracted the virus through her job, her sister said, especially knowing that children can be carriers of the virus without experiencing severe symptoms. After developing a fever and consulting with her doctor, Anderson was staying home from work, her family said.

The Arizona Daily Star could not contact the clinic where the woman worked. Pima County Health Department officials could not confirm whether they were working with the clinic to identify any medical workers and patients who could have been exposed, saying they “cannot provide information that would identify that person or their contacts even if that person or their family has come forward.”

Her family members said they want Tucson and the rest of Pima County to take the coronavirus pandemic seriously.

“There’s so many memes out there and all the funny jokes. I laughed at them in the beginning, too,” said Meza Cannito. “But the second it hits home, it changes everything and you realize the severity.”

With limited testing kits and supplies available, the Arizona Department of Health Services has tested a total of 368 people, 45 of whom have tested positive. Commercial labs make up the majority of the state’s testing capability, producing 357 positive results since they began accepting samples earlier this month.

As of Wednesday afternoon, there are 401 known cases of coronavirus in Arizona, including 49 in Pima County. To date, there have been six coronavirus-related deaths throughout the state.

“Love your family,” Meza said. “Don’t wait. Tell them you love them.”

A new federal law expands paid family and sick leave, but small businesses must pay and wait for reimbursement.

Editor's note: This story was updated to correct the extent of closures, which are primarily to forests' group sites, restrooms and visitor centers.

Mayor Regina Romero ordered the shuttering of "non-essential" businesses in Tucson — but only those that Gov. Doug Ducey said local governments can close. The number of known local deaths from COVID-19 on Friday rose to four.

The Gospel Rescue Mission says donations can be made online, or drop off items using the drive-thru.

Medical personnel discuss patients that had been admitted for testing for the coronavirus at the entrance Central Maine Medical Center on Friday, March 13, 2020, in Lewiston, Maine.

This electron microscope image made available by the U.S. National Institutes of Health shows the Novel Coronavirus SARS-CoV-2. Also known as 2019-nCoV, the virus causes COVID-19.