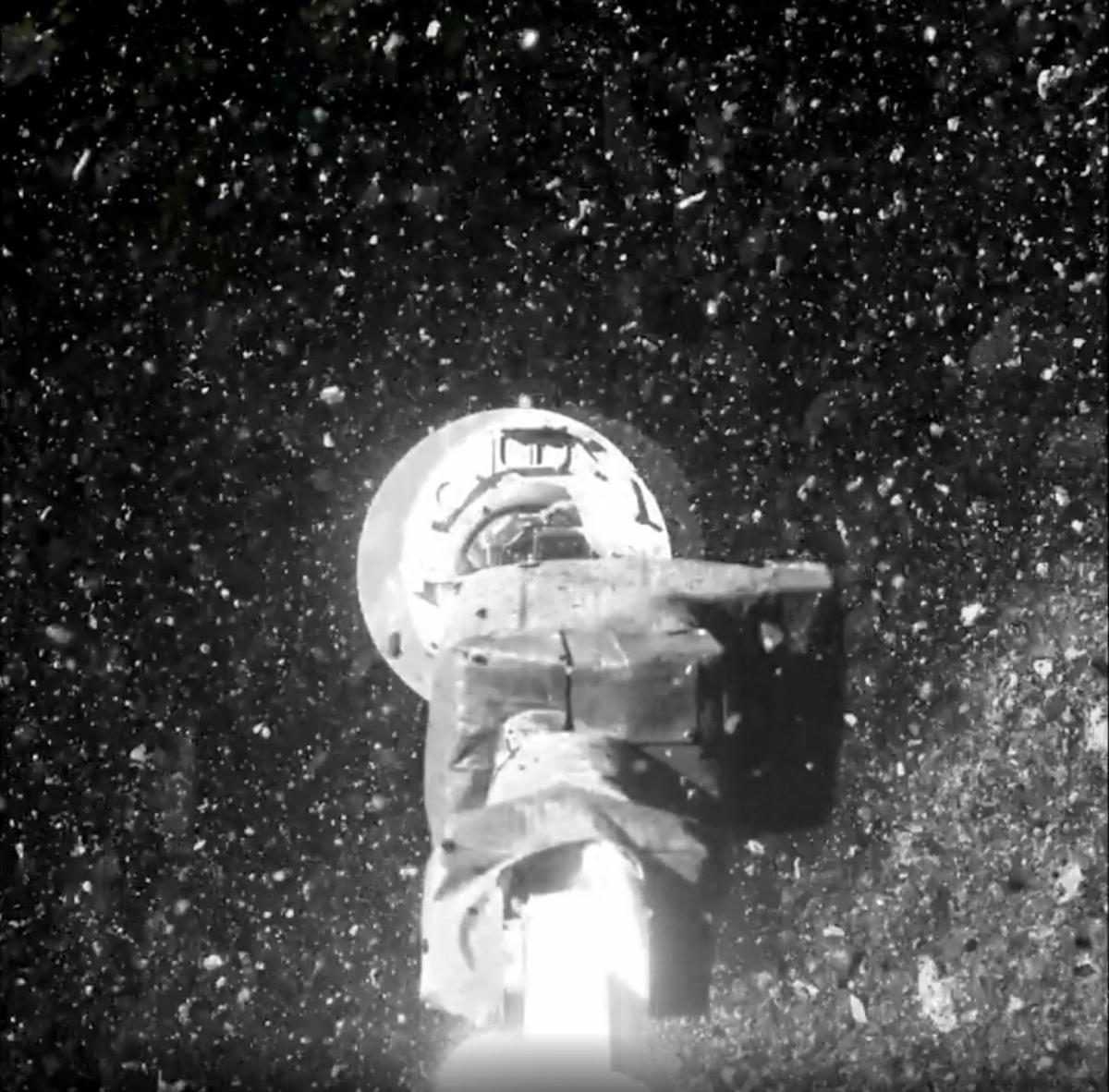 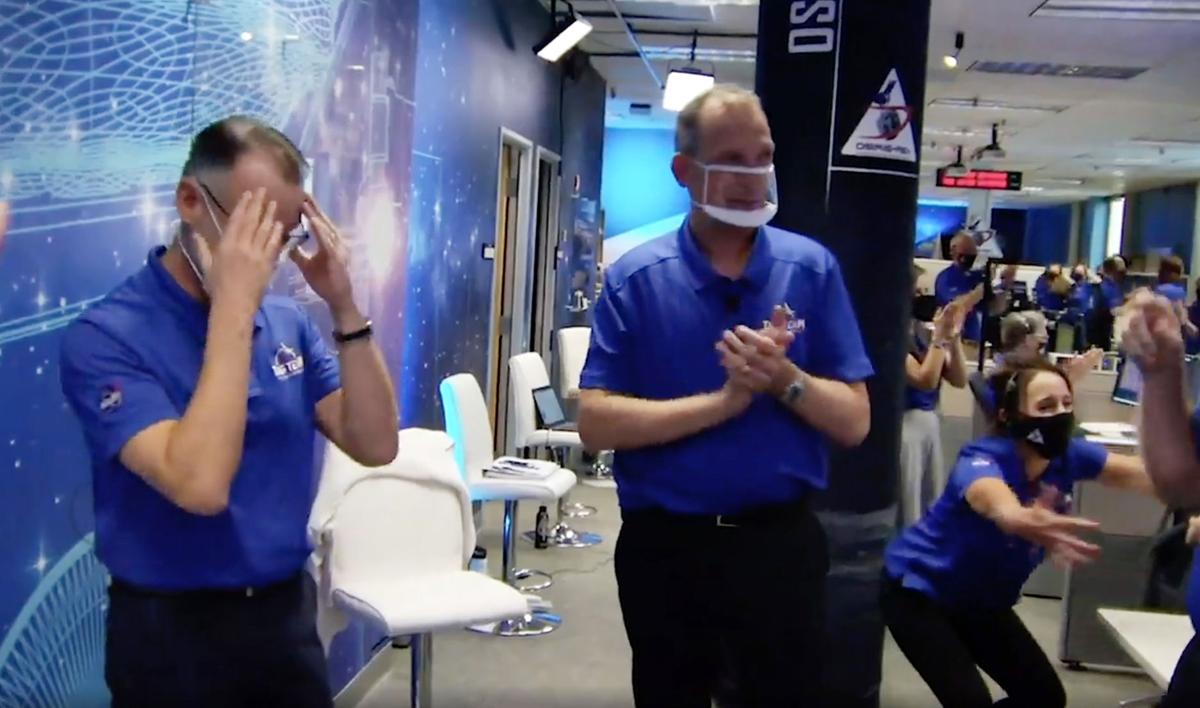 Dante Lauretta, a UA professor and leader of NASA’s OSIRIS-REx Asteroid Sample Return mission, left, reacts almost in disbelief as the craft touched down on Bennu.

After further review, Tuesday’s touchdown by the OSIRIS-REx team looks like an even bigger score than originally thought.

New images beamed back from space early Wednesday morning show the Tucson-born spacecraft making solid contact with the asteroid Bennu and kicking up a welcome explosion of debris with a blast of compressed gas from its collection arm.

Scientists said the footage from more than 200 million miles away is a clear sign that the touch-and-go sampling mission was a success.

“We really did kind of make a mess on the surface of this asteroid, but it’s a good mess,” said OSIRIS-REx principal investigator and UA professor Dante Lauretta. “It’s the kind of mess we were hoping for.”

The goal of the University of Arizona-led mission is to return to Earth with at least 60 grams — or just over 2 ounces — of pristine dust and pebbles known as regolith from the asteroid, which dates back 4.5 billion years and may hold clues to the formation of the solar system and the origins of life.

The mission team from the UA, Lockheed Martin and NASA’s Goddard Space Flight Center will spend the coming days trying to confirm how much material was collected.

On Thursday, Oct. 22, they will maneuver the collection arm in front of one of the spacecraft’s onboard cameras to look for evidence of dirt and rocks inside the sampling disc and on the stainless steel Velcro pads on its face.

Then on Saturday, they will extend the collection arm and send OSIRIS-REx into a spin to determine the approximate mass of the material inside the sampling disc.

The unmanned probe can hold just over 4 pounds of asteroid debris.

By Monday, Lauretta said, they should have a pretty good sense of how much stuff they collected.

If they need to go back for more material, they plan to send the spacecraft to another site on Bennu on Jan. 12. If Tuesday’s sample is sufficient, they will stow it sometime in early November and begin making preparations for the probe’s return flight.

OSIRIS-REx is slated to leave Bennu for good in early March and arrive back at Earth on Sept. 24, 2023.

A return capsule roughly the size of a pizza box will then carry the asteroid samples safely through Earth’s atmosphere to a designated landing site inside the U.S. Air Force’s massive Utah Test and Training Range west of Salt Lake City.

This is NASA’s first asteroid sampling mission, and just the second ever attempt to bring back pieces of a space rock.

Last year, the Japan Aerospace Exploration Agency’s Hayabusa2 spacecraft collected tiny fragments from the asteroid Ryugu. That unmanned spacecraft is now on its way back to Earth and is scheduled to arrive in December.

The rocket carrying OSIRIS-REx blasted off from Cape Canaveral in Florida on Sept. 8, 2016. It took the spacecraft more than two years to catch up to Bennu, entering orbit around the asteroid in December 2018 after a journey covering about 1.25 billion miles.

Mission team members expected to have their pick of large sandy areas in which to collect samples, but instead of welcoming beaches OSIRIS-REx arrived to find an asteroid covered in chaotic fields of boulders, some of them as large as buildings.

The unexpected terrain forced the team to develop new ways of selecting sampling sites and navigating around hazards, aided in large part by the highest resolution global map of a planetary body ever assembled.

The latest data transmitted back from Bennu shows the spacecraft actually touched the surface for about 6 seconds, with about 5 seconds of sample collection, before backing safely away from the asteroid.

“What an amazing accomplishment by such amazing people,” said NASA Administrator Jim Bridenstine during a NASA news conference Wednesday. “The OSIRIS-REx mission outperformed in every way.”

Lauretta said the mission team began receiving footage from the event late Tuesday night, with the “money shots” arriving at the mission’s operation center at Lockheed Martin near Denver at around 1 a.m. Wednesday.

That sequence of images shows the sampling disc sinking roughly an inch into the surface of the asteroid, crushing rocks in the process. Then, a second later, rocks and dirt go flying as the disc sends out a blast of nitrogen gas.

After a total journey of more than 2.3 billion miles, the probe’s sampling arm touched Bennu within about 3 feet of the bull’s-eye at the center of the collection area known as Nightingale.

“I must have watched it about a hundred times last night before I finally got a little bit of shut-eye,” Lauretta said of the footage. “Then I dreamed of a wonder world with Bennu regolith particles floating all around me.”

As of Wednesday evening, OSIRIS-REx was still slowly drifting away from the asteroid, in part to keep it well clear of the debris kicked up by the touch-and-go.

The spacecraft will fire its thrusters to stop its motion away from Bennu on Friday, when it will be about 50 miles from the spinning space rock, said Rich Burns, NASA’s project manager for the mission.

That could be as close to Bennu as OSIRIS-REx ever gets again.

If the team decides that Tuesday’s sample is large enough, the material will be stowed and the scientific portion of the mission will be over, Lauretta said.

All of the effort after that will be focused on a singular goal, he said: getting the spacecraft and its precious cargo safely back to Earth.

The University of Arizona-led OSIRIS-REx mission completed a "flawless" final rehearsal on Tuesday, clearing the way for the real thing on Oct. 20: scooping samples from the surface of the distant asteroid Bennu.

New research by a University of Arizona-led team suggests two near-Earth asteroids — but Bennu and Ryugu — were actually sheared off and shaped by a by a single crash.

UA is among 4 finalists for NASA's next Discovery space mission

UA proposal is to study volcanic activity on one of Jupiter's moons, Io.

Will asteroids end the world: Dante Lauretta at TEDxTucsonSalon

Dante Lauretta is a Professor of Planetary Science and Cosmochemistry at the University of Arizona's Lunar and Planetary Laboratory. He receiv…

NASA has selected a University of Arizona researcher, who at age 30 is early in his career, for a $20 million mission to study the "gaseous halos" that surround galaxies.

The maneuver will bring the unmanned probe to within about 2.3 miles of the mountain-sized space rock on Wednesday, April 7.

Dante Lauretta, a UA professor and leader of NASA’s OSIRIS-REx Asteroid Sample Return mission, left, reacts almost in disbelief as the craft touched down on Bennu.