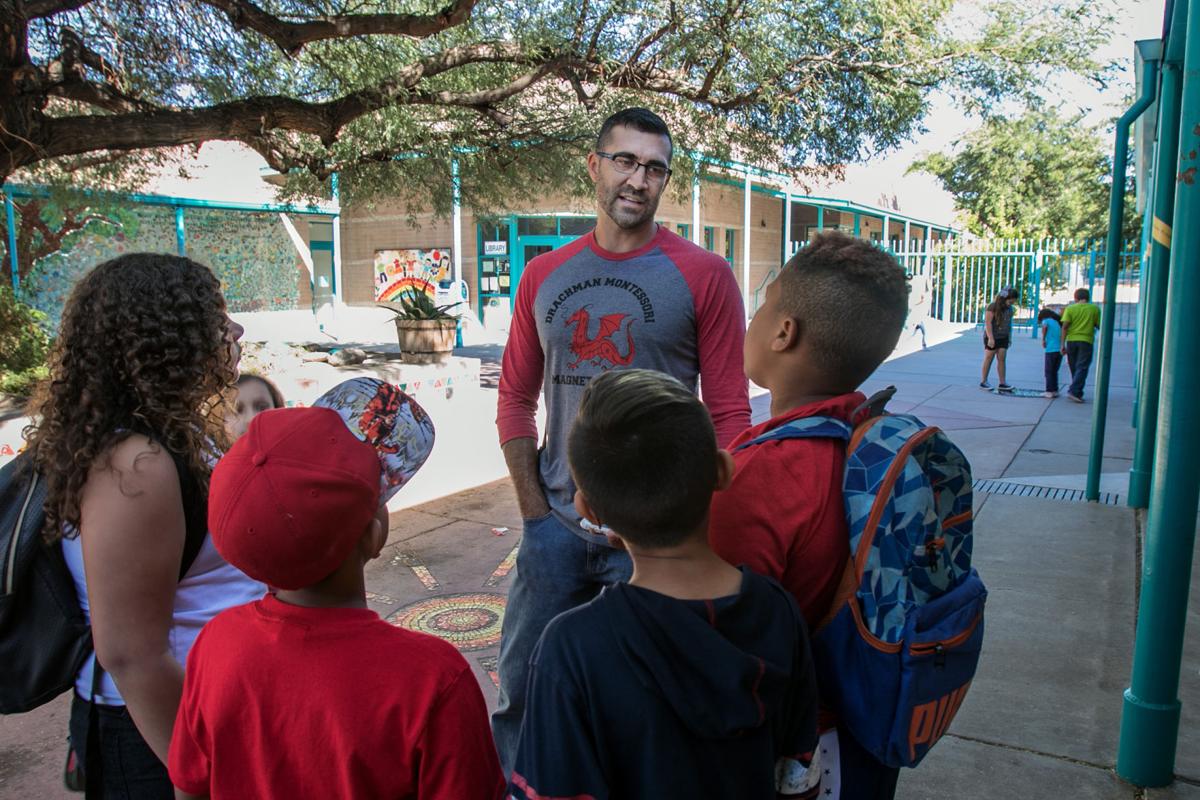 Jesus Celaya, principal of Drachman K-8 Montessori Magnet School, talks with kids after school at 1085 S. 10th Ave. The school recently went from a grade of A to an F in AzMERIT scores. 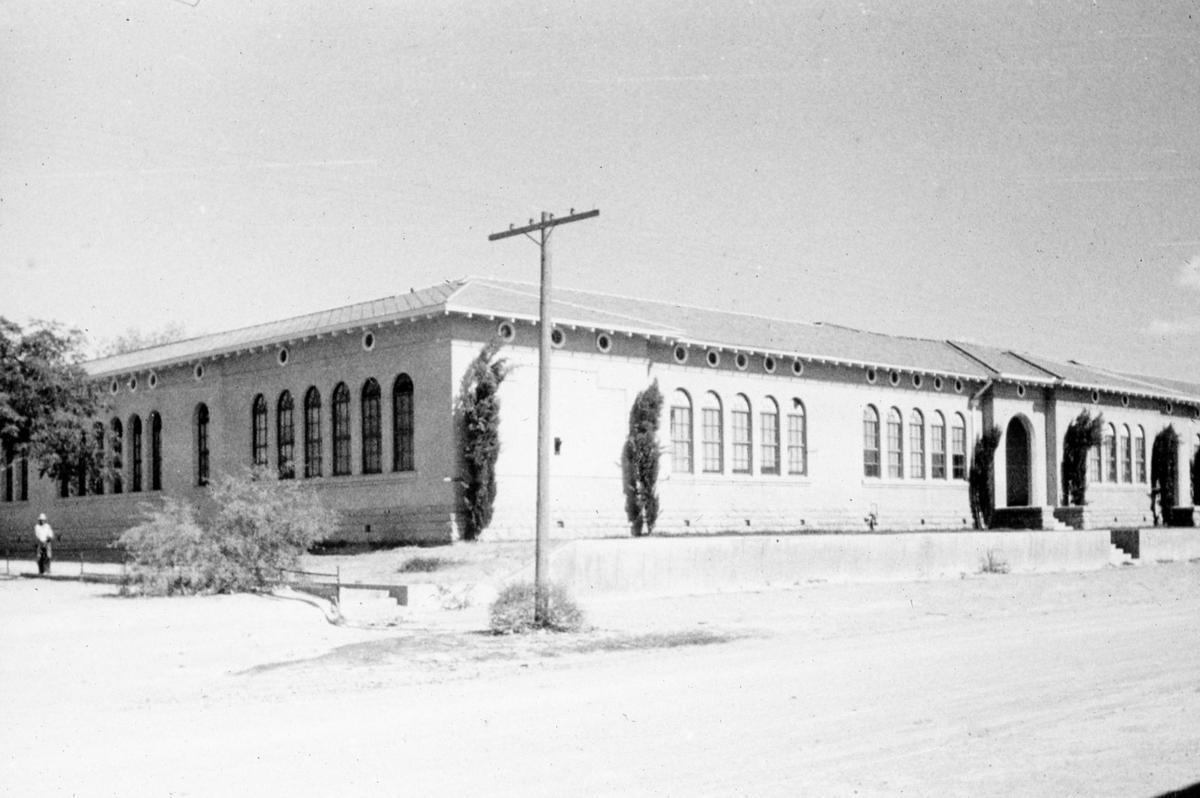 The walls in the front office of Drachman Montessori K-8 Magnet School are adorned with proof of the school’s many achievements — plaques, awards and banners from various education groups all celebrate a history of academic performance.

One such plaque extolls how, in 2015, the U.S. Department of Education awarded Drachman the “blue ribbon” label for closing the achievement gap between students. Another declares it a 2015 National Magnet School of Excellence by the Magnet Schools of America.

But with the new letter grades, Drachman is no longer an A school.

This year, it was branded an F school.

Kathryn Jensen, a teacher at another campus in the Tucson Unified School District who has one child at Drachman and another who recently graduated from the school, said when she saw the new ranking, she was “shocked.”

“I’m in the district. I know the other F schools. Drachman is not an F school,” she said.

TUSD Superintendent Gabriel Trujillo said the district has initiated a formal inquiry into what happened at Drachman — the only school in the state to drop from an A to an F since the last time the state issued letter grades.

“I don’t want to say Drachman is under investigation, but we certainly do want to look at the test administration,” Trujillo said. “I want to put to rest any public concerns that there were any nefarious or anything less-than-ethical practices being employed.”

Trujillo said based on the information the district has reviewed so far, there’s no evidence that school did anything wrong. But he noted that the review is ongoing.

The school’s fall from grace is likely attributable to a variety of factors, not least of which is that the state’s new A-through-F grading system is based on a completely different set of criteria, including a different test, than the last time the state issued letter grades.

The formula behind the state’s new A-through-F grading system relies heavily on student academic growth, meaning schools must focus not just on getting enough students to pass the test, but to show that all students, be they high or low performing, are improving.

Jesus Celaya, the longtime principal at Drachman, noted that the school actually performed better than most TUSD schools on the state’s AzMERIT test, which accounts for a large portion of the school’s letter grade.

Celaya pointed out that Drachman earned more proficiency points than 16 district and charter schools in Pima County that were assigned B grades.

Tolson Elementary School, for example, had AzMERIT scores that were nearly identical to Drachman’s, but Tolson received a B rating.

“Growth is why we are considered an F school,” he said.

Trujillo said he suspects the school missed out on a lot of growth points by focusing their test preparation on students who were most likely to pass the test, and failing to help other students improve on previous scores.

“I would not blame Drachman if that was the approach they took to attain their A, because hundreds of other schools did the same thing,” Trujillo said, noting that the old letter grade formula encouraged schools to just focus on getting the largest number of students possible to pass the test.

“I’ve long said the best part of the criteria is it forces the school to focus on whole student body,” Trujillo said.

But the F grade also underlies a more serious problem — Drachman’s test scores plummeted from 2016 to 2017.

Drachman’s spring 2016 scores on AZmerit show that 74 percent passed the math portion of the test, and 71 percent of students passed the language arts portion.

Only one TUSD school in 2016 scored higher on both the math and language portions of the test: University High School, a high-achieving school which requires students to test in for admission.

Drachman, by comparison, is both a neighborhood school in a lower-income area of Tucson, and a magnet school that attracts students from across the city interested in arts, music and the hands-on Montessori model.

Last school year — in spring 2017, only 34 percent of Drachman’s students passed the math portion of the test and 41 percent passed the language arts portion.

The median score of TUSD schools’ grades on the test was just 29 percent passing.

While Drachman’s test scores are still above district average, the school’s drop in the math and language portion of the test, which decreased by a combined 70 percentage points, is by far the steepest year-over-year decline of any school in the state.

Celaya attributed the drop in test scores to moving to an online test for the first time this year, saying the Montessori model de-emphasizes technological learning in favor of a hands-on approach.

But the entire district moved to online testing this year, and no other school saw such a pronounced drop.

Bob Schaeffer, the public education director at the National Center for Fair and Open Testing, a national nonprofit testing watchdog, said switching to a new testing format can definitely affect a school’s performance. But not to that degree.

He called the drop “well beyond a yellow flag” that merited a full investigation by the state to determine if the school cheated on their 2016 tests.

The only other instances where drops so pronounced turned out to not be cheating, he said, were instances where there was a dramatic, drastic change in the school population, like when a factory moves into a neighborhood.

The Arizona Department of Education, which monitors test results for outliers that could signal cheating, said that when it reviewed Drachman’s test scores, there was a relatively simple explanation for the drop — the school has seen massive turnover.

Of the 149 students who took the test at the school last spring, 55 hadn’t taken the test there the year prior. For the purposes of the test, that means more than a third of the students were brand new.

On top of that, 38 students left the school, further contributing to the school’s turnover problem.

There was also the school’s shift from a K-6 model to a K-8 model, which resulted in taking on new students who hadn’t been brought up in the Montessori way.

“We realized they didn’t have the Montessori foundation of learning to work in a self-directed manner or independently. But on top of that, they were students who the year before hadn’t passed the AzMERIT. So we had to change our program to support remediation and intervention for those students, which also impacted the amount of services our returning students were able to receive,” he said.

Celaya said he expected a drop in their letter grade since they received an A, but not such a sharp decline.

For parents at the school, the new grade has been hard to swallow.

While they don’t feel the F grade reflects the school’s overall performance, they worry it will impact enrollment, morale and the public’s view of the school and its students.

Beyond public perception, the failing grade could prevent Drachman from collecting performance-based funding from the state.

Jensen, the parent of a current and a former Drachman student, said the school was “fabulous” for her children.

She said there’s more to a school than test scores, and Drachman’s emphasis on the Montessori model, its extracurricular activities like mariachi, sports, dance and its garden, complete with a chicken coop, makes it one of the most desirable schools in the city, F grade notwithstanding.

Jensen said the idea that the school cheated to get its good grades had never crossed her mind, and even with the sudden and hard-to-explain drop in test scores, she doesn’t believe anything untoward happened.

“I wouldn’t even put cheating on the board of possibilities. I’ve know Dr. Celaya and the faculty for a long time … And morally and ethically, I think that would be out of the realm for Drachman,” she said.

Instead, she blamed state lawmakers and the Board of Education for constantly “moving the line on us” by creating new tests and metrics for letter grades.

“There’s a problem with the letter grades when a Blue Ribbon school gets an F,” she said.

The reaction from her kids has been mixed, she said. Her daughter, who moved on to another middle school before Drachman offered seventh and eighth grades, was upset and very protective of her alma mater, Jensen said.

Her son, an artistic fifth-grader, didn’t pay any attention to the new letter grade.

He, too, didn’t think the grade reflected the what was really going on at the school, Jensen said.

The course, taken by about 100 students, was never vetted or approved.

Some Arizona schools received excess special education funds, while others were shorted.

A man was sent to a local hospital after an apartment fire in the city's north side.

Star Opinion: Tiny homes in Vail that shouldn't be necessary, but are

The class was slipped into four schools without proper vetting or approval.

The plan pitted three schools against each other, board members acknowledged.

TUSD may review pay of all board staffers, rather than a single employee

The Governing Board balked at a recommendation to redraw school boundaries.

The state and federal governments' roles in helping struggling schools pull themselves up by their bootstraps have diminished in recent years.

A new law could potentially leave the state with a multitude of different tests to measure school success, eliminating comparison abilities.

Jesus Celaya, principal of Drachman K-8 Montessori Magnet School, talks with kids after school at 1085 S. 10th Ave. The school recently went from a grade of A to an F in AzMERIT scores.