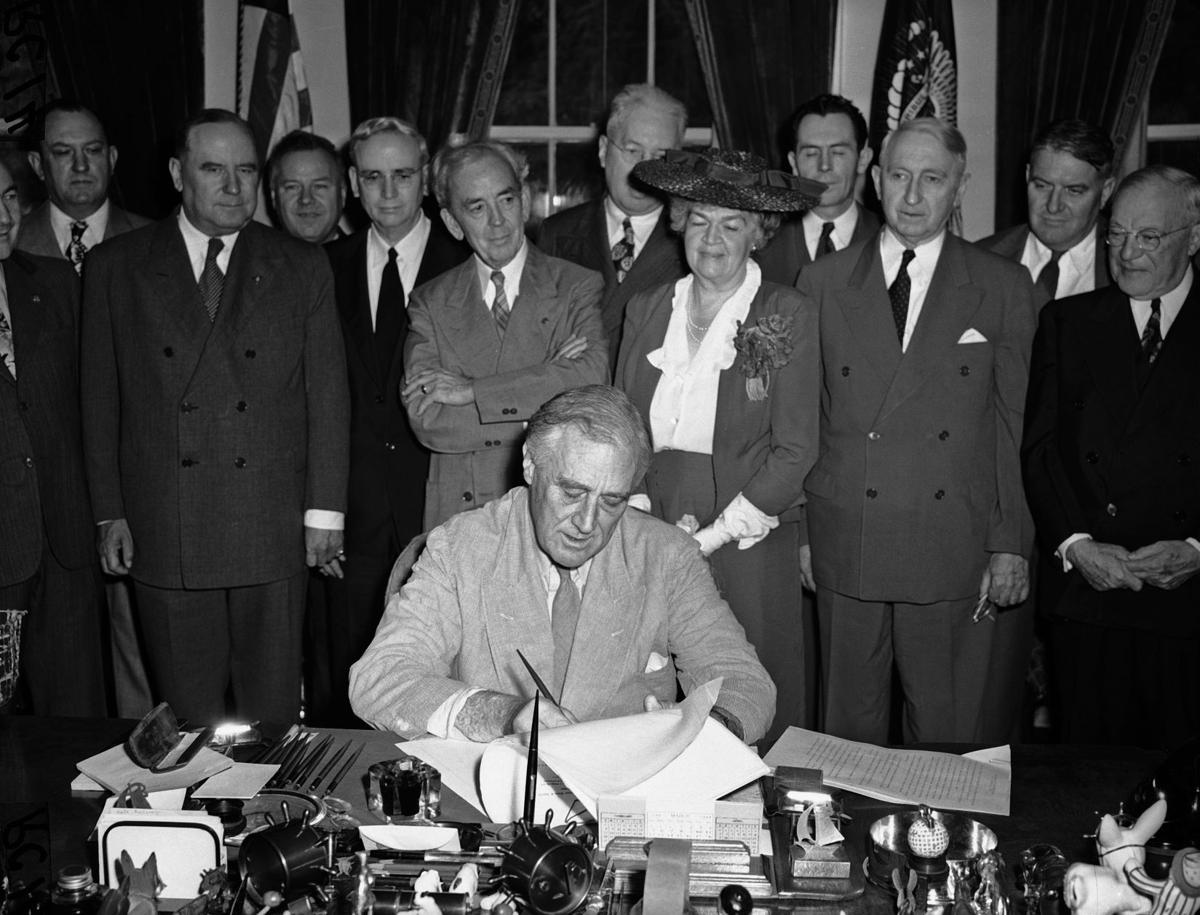 On June 22, 1944, President Franklin D. Roosevelt put his signature on the GI Bill of Rights at the White House in Washington, putting into law the measure for veterans aid. The bill provided benefits to recently returning World War II veterans, from grants for college tuition and business loans to job training to unemployment payments. It provided literacy, higher education and upward mobility for millions. 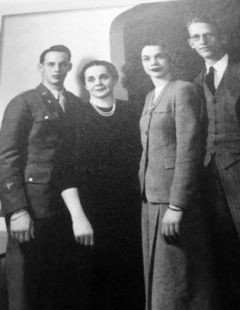 The Coile family in the 1940s (from left): from left, son Jack, mom Clara, daughter Martha and dad Sam Coile. After the Depression ruined his business, Sam was named one of the 10 original members on the Board of Veteran Appeals.

In my family’s narrative, the Great Depression was an unmitigated tragedy for my grandfather, leaving a tinge of regret or sadness even after good times returned.

But I learned recently that family narratives sometimes tell the story too narrowly, missing the proverbial forest for the trees.

It turns out that, if not for the series of life changes forced on him by the Depression, my grandfather would not have gone on to play a crucial role in the landmark GI Bill, which became law 75 years ago this month.

Sam H. Coile, the son of a Presbyterian minister in Knoxville, Tennessee, had worked his way through university, completing his architecture engineer degree only after interrupting his studies to serve overseas in the First World War.

In 1922 he co-founded the firm Coile and Cardwell with fellow architect Leland Cardwell in Johnson City, Tennessee, where they quickly rose to prominence designing churches, schools and mansions. A Google search today turns up references to their lasting work, including the First Presbyterian Church in Greeneville, Tennessee, done in modified Greek Revival style with a balustraded portico and four Doric columns; additions to St. John’s Episcopal Church in Johnson City in medieval English design with half-timber; and the Colonial Revival-style Maywood house at Maymead Farm in eastern Tennessee, listed on the National Register of Historic Places.

By July 29, 1929, Sam was riding especially high when he wrote cheekily to his wife, Clara, on the firm’s letterhead, teasing her as he enclosed yet another round of sketches for her own dream home. “Your suggestion that it may be necessary to employ another Architect may have to be carried out. However, if you will pardon my suggestion it might prove simpler for you simply to secure another husband, for I am sure we could design your house easily if sufficient funds for its building were available.”

By 1933, some 13 million Americans were unemployed, and Sam Coile had to turn, hat in hand, to his wife’s locally prominent father, a telephone company pioneer and politician — a move that was humbling if not humiliating for a proud, self-made man.

His father-in-law recommended Sam to U.S. Secretary of State Cordell Hull, a friend and fellow Tennessean, for a federal job. Hull’s boss, President Franklin D. Roosevelt, then named Sam as one of the 10 original members on the Board of Veterans Appeals in Washington, D.C.

I knew my granddad had a fairly high-level job in the Veterans Administration, because I grew up seeing photos on their mantel of my grandparents at occasional White House garden parties held for the VA, posing for quick snapshots with FDR and Eleanor, and with Harry and Bess Truman.

But again, the narrative I heard was a bit melancholy — that civil service was honorable work that supported the family, and Granddad was privileged to help his fellow veterans, but it paled compared with the creative, artistic and autonomous career that he lost, of building tangible, beautiful things to last for decades.

My grandparents always stressed that architecture, seen by many as a luxury, was among the earliest professions wiped out in an economic crash. So, my Dad was admonished to put aside his own strong artistic talent and pursue a Depression-proof career — he chose the mining of copper and other metals. Despite Dad’s success, a tinge of regret also colored that trickle-down result of the Great Depression, it seemed to me, and to my mom.

Imagine my surprise, then, to learn just last year, while going through old family papers and mementos, that my grandfather was hardly the unsung bureaucrat toiling in the VA that I had envisioned (either because the narrative had a life of its own, or he was too humble to boast, or I was too incurious about family to ask the right questions in my youth).

In fact, Sam H. Coile, springboarding from his role on the appeals board, was an administrator of the GI Bill from its earliest days in 1944 — and in 1951, he was named director of its multibillion-dollar Vocational Rehabilitation and Education Service.

“He became the directing force in the biggest education and training program in history for veterans of World War II, and later for Korean Conflict veterans,” the VA information service said in a news release, reported in newspapers when he retired in 1958, and again when he died in 1972 at age 77.

“During his tenure as director, more than 10,500,000 veterans had been educated in colleges and schools or trained on farms or jobs,” the official news release continued. “Nearly 650,000 of these received special rehabilitation because of serious disabilities suffered in war service.

“At one time, in 1947, more than half of the students in American colleges and universities were ex-servicemen obtaining their education under the GI Bill. He also directed VA’s vocational counseling program under which 2.5 million veterans received guidance toward job and career possibilities.”

The responsibilities were endless, the work stressful at times, enough to give anyone a solemn demeanor, as a Newspapers.com search of his name confirms.

One American veteran attending Oxford complained to the press in 1947 that the English university had been showered with GI Bill paperwork but not tuition money; the article ran widely in newspapers, with a line saying that Coile, in charge of the European programs under the bill, was in Paris on business and couldn’t be reached for comment. (No follow-up story presented his response, by the way.)

Occasionally over the years, Coile seemed to be badgered both ways — that the VA was either too tough or too lax against participating training programs or schools that tried to abuse the system. And in 1956, he got caught up in the Red Scare of McCarthyism, having to testify defensively before a congressional subcommittee that VA officials had known for years that one school owner participating in the bill might be a communist, but did not have evidence to stand up in court.

But in the end, those are “trees,” and oh, how amazing the forest can look when we finally step back to view it in panorama.

Granddad gave up architecture — but became an architect, with his peers, of a social revolution that lifted entire generations into the middle class.

As I now understand and appreciate, he, like so many other veterans of foreign wars, got a second chance and a new start from that original GI Bill 75 years ago.

And with the benefit of hindsight, I can say the legacy he helped to create and build, of literacy, higher education and upward mobility for millions, will last far longer than even his grand brick-and-mortar structures.

Read about what the landmark law meant to Star readers and the Arizonan who pushed it through the Senate, Special Section Inside brought to you by Freedom RV logo goes here.

The 2018 centennial of Armistice Day: Share your family's World War I memories

One-hundred years ago on Nov. 11, a young woman from East Tennessee, attending college in South Carolina, clipped out the banner news article …

These are the stories as passed down through the generations.

5 decades ago, Vietnam War started to alter Tucson and its children

It was 1965 — and the father of a Duffy Elementary fourth-grader became the first Tucsonan confirmed to have died in Vietnam.

Author Dave Cullen chronicles the remarkable first year of the Never Again/March for Our Lives movement in his new book “Parkland.” He told a …

Re: the June 27 article "GI Bill mover helped change US more than he could have known."

Deputies seize estimated $325K worth of marijuana at Tucson business

Pima County Sheriff's Department deputies seized an estimated $325,000 worth of marijuana at a business earlier this week on the northwest-sid…

On June 22, 1944, President Franklin D. Roosevelt put his signature on the GI Bill of Rights at the White House in Washington, putting into law the measure for veterans aid. The bill provided benefits to recently returning World War II veterans, from grants for college tuition and business loans to job training to unemployment payments. It provided literacy, higher education and upward mobility for millions.

The Coile family in the 1940s (from left): from left, son Jack, mom Clara, daughter Martha and dad Sam Coile. After the Depression ruined his business, Sam was named one of the 10 original members on the Board of Veteran Appeals. 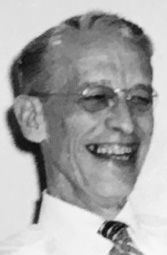