Gov. Ducey: Teachers aren't going to get 20 percent pay raises
Share this
1 of 2 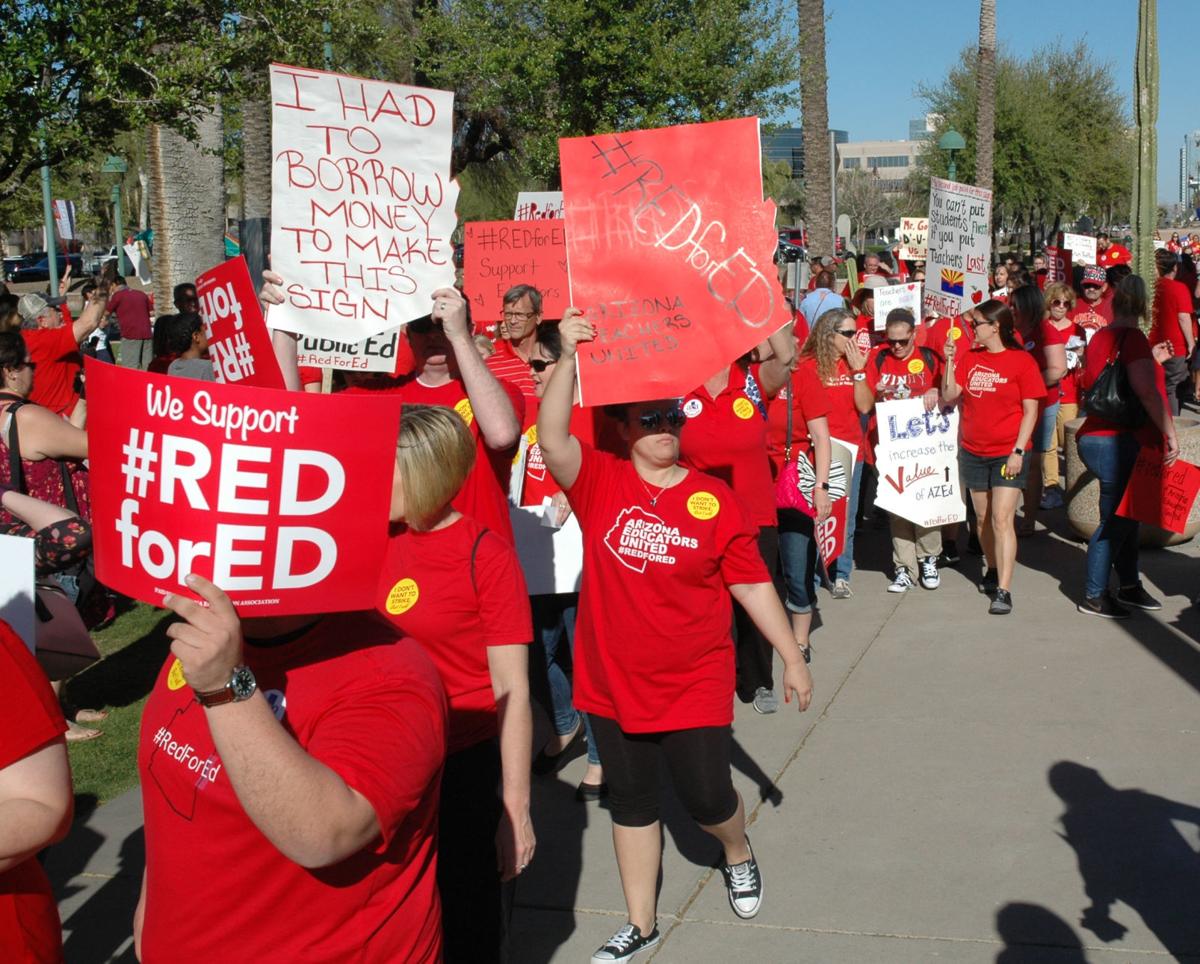 Teachers rallied at the Arizona Capitol on Wednesday, demanding a 20 percent pay hike. 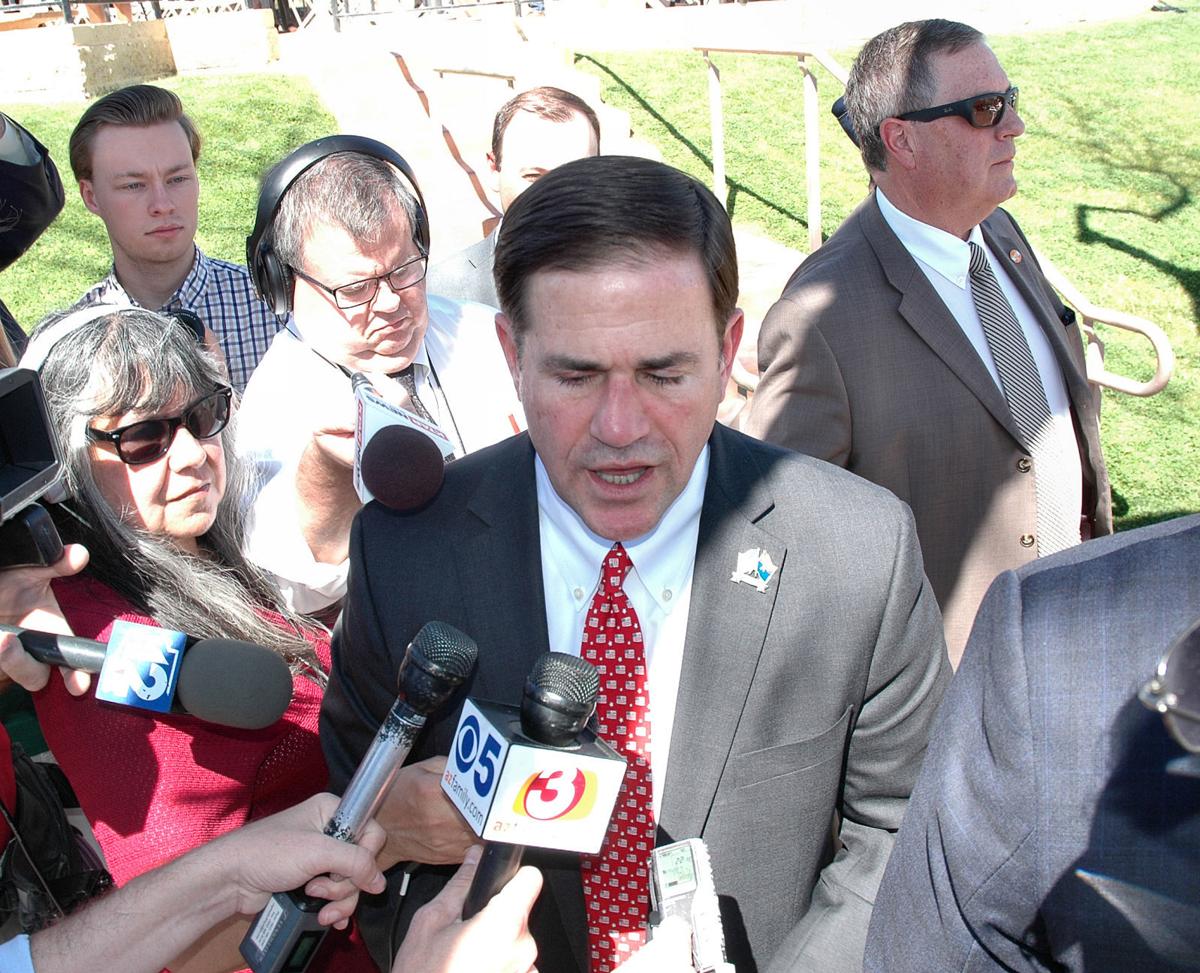 Gov. Doug Ducey speaks to reporters in Phoenix one day after a large rally by teachers demanding higher pay at the Capitol. Ducey said teachers will not be getting a 20 percent pay raise.

PHOENIX — Gov. Doug Ducey said Thursday that teachers aren’t going to get the 20 percent pay hike they are demanding — not now and not in the foreseeable future.

And he intends to continue to propose further cuts in state taxes even as teachers say that without substantially more money they may have no choice but to strike.

Speaking to reporters a day after a rally brought more than 2,000 teachers and supporters to the Capitol, the governor rejected the demands they laid out. Ducey said he’s doing the best he can.

“We’re definitely trending in the right direction,” he said. “I’ve got a sense of urgency on this.”

Ducey said the state has increased funding for salaries by about 9 percent since he took office in 2015. But less than half of that is for actual raises, with the balance going to teachers who had to be hired because of student growth.

That, however, was not really new dollars but instead funds to reimburse schools for what they did not get in prior years when lawmakers ignored a voter mandate to adjust state aid to schools annually to account for inflation. And most of those dollars came from a trust account that belonged to schools in the first place.

What that leaves is the 1 percent increase that lawmakers gave teachers for the current school year and the governor’s promise of an additional 1 percent hike for the coming school year.

And what it also does is leave Arizona teacher pay close to the bottom nationally.

Ducey disputed figures from the Morrison Institute that put salaries for elementary school teachers last when considering the cost of living, with high school teachers at No. 49.

Instead, he says Arizona is just 43rd in the nation.

But the governor is not backing away from his pledge not only to never increase taxes but also in refusing to reverse any of the hundreds of millions of dollars in corporate tax cuts that have kicked in since he took office. Each $100 million that was lost would translate to a 3 percent pay hike for teachers.

Perhaps more galling to teachers is Ducey’s insistence that lawmakers approve yet another tax cut this year, albeit a much smaller one that eventually would reduce state revenues by an additional $15 million a year.

Ducey said he does not see tax cuts as antithetical to higher teacher pay. He said the state’s economy has grown since he took office, adding 160,000 jobs.

Per-student state aid is up 5 percent in the same period, but it still remains more than 4 percent below where it was a decade ago.

“He’s going to continue to ignore and neglect us,” he said. And Karvelis isn’t buying Ducey’s argument that the state can improve its economy by continuing to shave off sources of revenue.

“Every single one of those tax cuts has come with the promise it’s going to inject capital and dollars into our economy,” he said. “That hasn’t happened. That’s a lie.”

Nor does he believe that a 20 percent pay hike for teachers is unrealistic, pointing out that it would not even bring the average salary for Arizona teachers up to the national median.

Part of what is working against the teachers is the sheer size of their ask. A 20 percent hike has a price tag approaching $680 million, which would require more than a 10 percent increase in the approximately $5.4 billion in state dollars now going into public schools.

Arizona's sales tax for education will be extended 20 years

An aide to Republican Gov. Doug Ducey said he will sign the extension into law. The sales tax supports teacher salaries, among other uses.

Arizona investors could soon be in line for a tax cut, with a big chunk of it going to 183 multi-millionaires.

Gov. Doug Ducey won't promise to veto new tax cuts, even as he says the state is putting as much money as it can into public education.

Lawmakers to consider measure allowing one legislative district for every 220,000 residents.

Arizona families may be spending slightly less on groceries

The typical grocery basket of 16 items is down about a dollar.

House Democrats failed Tuesday in their bid to keep the name of the Almighty — at least the English version — out of classrooms.

The school, which is being considered for closure, has suffered from declining enrollment.

Teachers rallied at the Arizona Capitol on Wednesday, demanding a 20 percent pay hike.

Gov. Doug Ducey speaks to reporters in Phoenix one day after a large rally by teachers demanding higher pay at the Capitol. Ducey said teachers will not be getting a 20 percent pay raise.