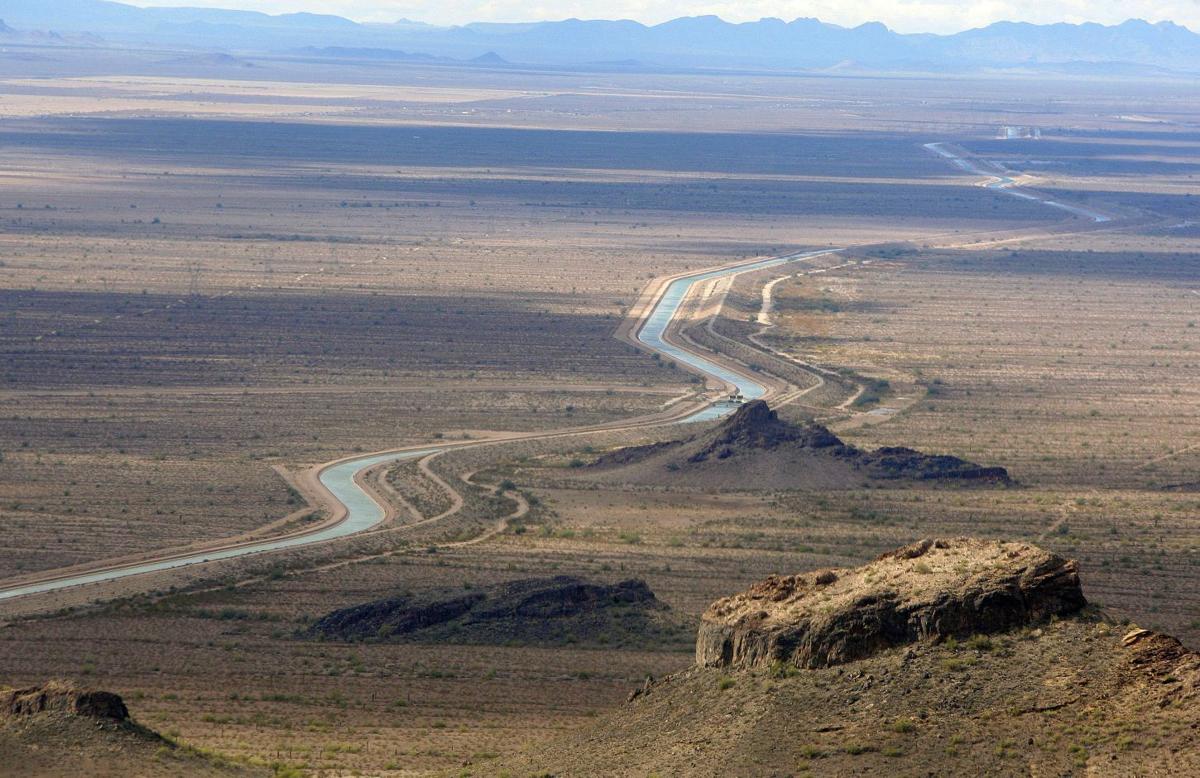 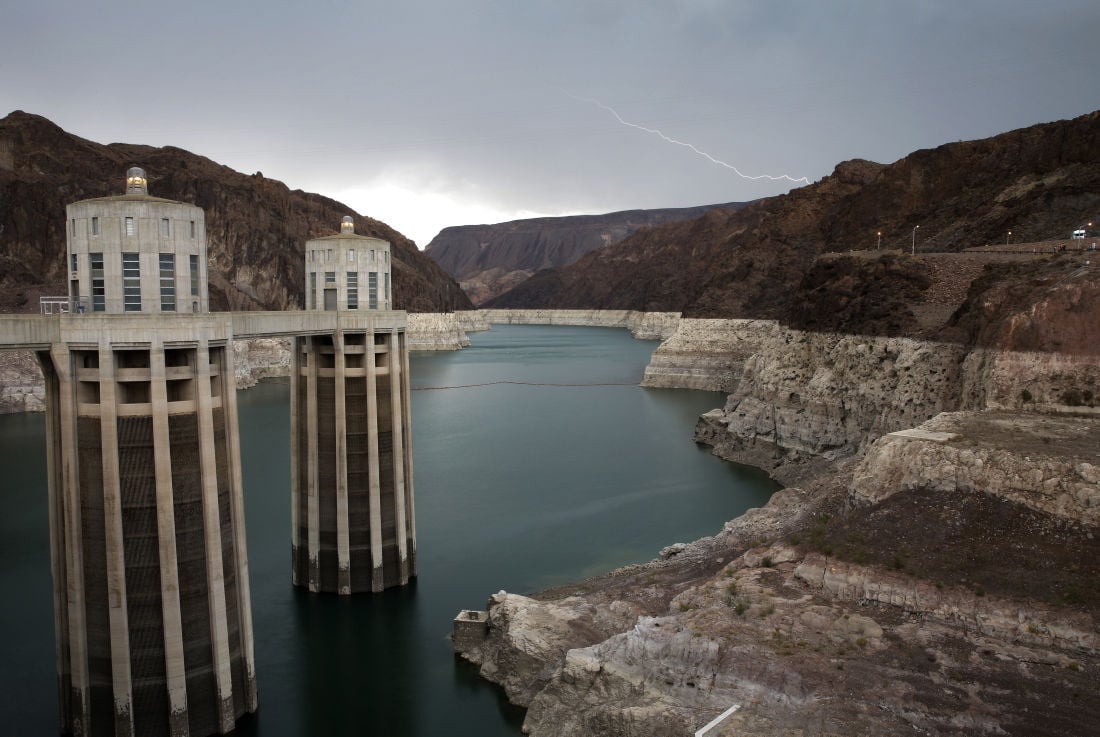 Lake Mead, with the Arizona intake towers of Hoover Dam, has shrunk to its lowest point since being filled with the Colorado River in the 1930s. The light ring shows the high water mark. 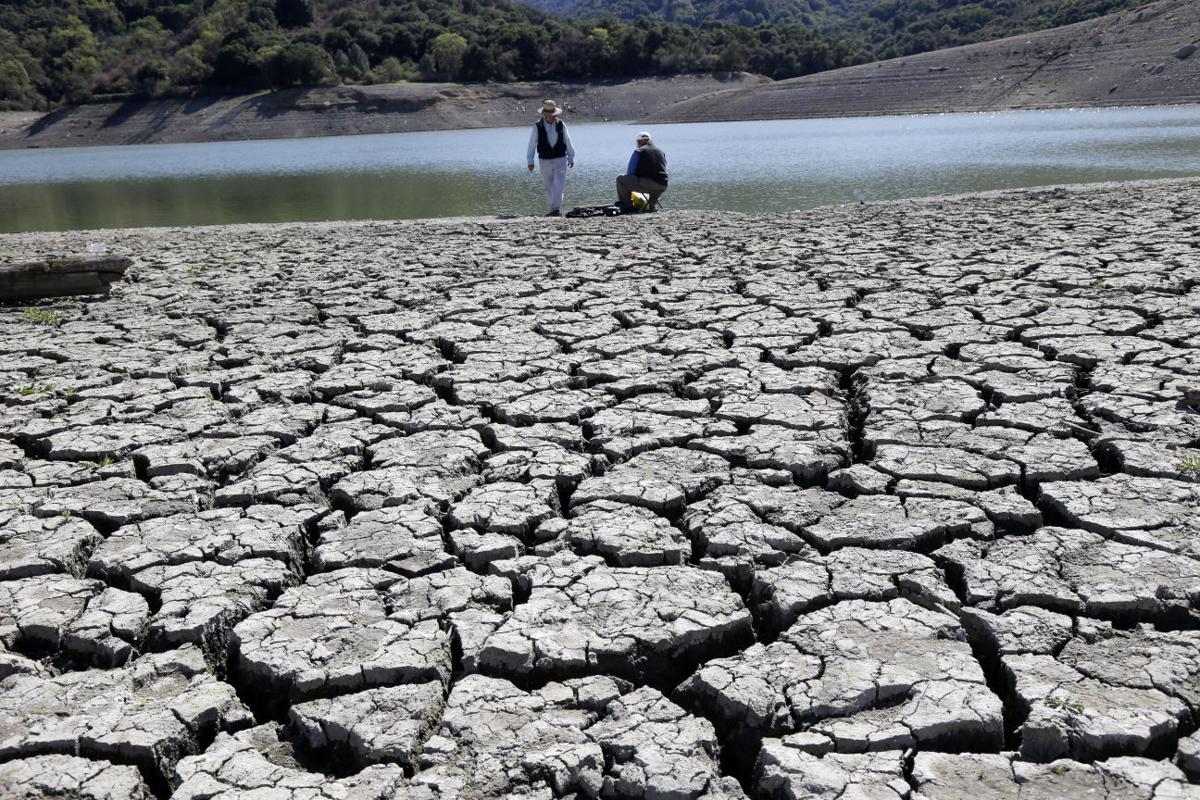 The dry bed of the Stevens Creek Reservoir is seen on Thursday, March 13, 2014, in Cupertino, Calif. Lack of seasonal rain has meant water shortages for Californians this winter. Gov. Jerry Brown has asked for a 20% reduction in water usage, farmers are forecasting an increase in produce prices and ranchers are being forced to sell cattle at auction at a higher rate.

The conservative governor and the liberal congressman say Arizona must be vigilant to ensure its drought-parched neighbor doesn’t use federal action to grab some of Arizona’s Colorado River supply.

Of particular concern is a California drought bill that’s been quietly negotiated for months in the U.S. Senate.

“The secrecy generates concern and nervousness. Nobody I know in Arizona knows what’s in this bill at this point,” says Chuck Cullom, who manages Colorado River issues for the Central Arizona Project, the canal system that brings the river water to Phoenix, Tucson, tribes and farms.

The two states have fought over water many times, and any threat from giant California has always been a potent Arizona rallying cry. California, after all, has much more political clout: 53 members in the House of Representatives compared to Arizona’s nine. And California’s water situation is much worse than Arizona’s, which has done far more than its neighbor over the years to conserve water and prepare for shortages.

That’s why Democratic Phoenix Mayor Greg Stanton added his voice to the concerns a few days ago, saying in Washington, D.C., that his city must be ready for a fight with California.

But outside Arizona, this view is disputed by many water experts. Four say Arizona has no reason to worry about a California water grab. It’s “ludicrous” to suggest California could undo the historic contract divvying up Colorado River water that was signed by seven governors and the president, says Patricia Mulroy, a researcher who used to run Las Vegas’ water utility. And so far, Arizona officials have offered no evidence California even plans to make a run at our water.

Still, when Tucson water conservation activist Val Little heard California’s governor proclaim emergency water cutbacks this year, her first thought was: Anything bad that happens to California is a threat to Arizona.

“Things are so unknown, on the tipping point and on the edge, that anything can happen,” said Little, director of the Water Conservation Alliance of Southern Arizona.

Forced to cut back

History shows Arizona has reason to worry about California.

In 1922, Arizona balked at signing the Colorado River Compact splitting water among the seven river basin states because it felt California got too much.

In 1934 came the abortive effort by Arizona Gov. Benjamin Moeur to stop construction of Parker Dam on the river by calling out the Arizona National Guard. He felt — rightly, it turned out — that the dam would be a conduit, siphoning river water to Los Angeles.

Even after Arizona signed the compact in 1944, California kept arguing it had the legal right to more water than Arizona believed it did. California blocked approval of the Central Arizona Project at every turn for nearly 25 years.

Then came the landmark Arizona vs. California court case, which the U.S. Supreme Court decided in Arizona’s favor in 1963. It found Arizona had rights to 2.8 million acre feet of river water it had long claimed. California was awarded 4.4 million, although it was using much more.

In 1968, when Congress finally authorized the CAP, California’s political muscle forced Arizona’s delegation to give California first priority and the CAP last priority to river water during any shortage.

Even into the early 2000s, California was using far more than its 4.4 million acre feet. The Interior Department had to prod the state into finally cutting back.

“We must be vigilant”

Ducey first raised the latest specter of a California water grab during a water policy speech in Tempe on June 9.

“We must be vigilant as we deal with the federal government to address these issues,” he said. “We need to impress upon them what Arizona has already done with water … so their actions to aid California don’t reduce Arizona’s flexibility or ability to manage our own water.

“There should be no fallout from the water situation that might limit or affect Arizona by the Interior secretary. Arizona already takes the lion’s share of Colorado River shortages.”

If California did covet Arizona’s Colorado River water, experts say it would take a congressional act to get it, because the Interior Department couldn’t overturn the 1922 compact or the Supreme Court ruling.

While Congress hasn’t dealt much with water rights issues since 1968, Grijalva agrees it’s time to be vigilant — especially of the powerful Imperial Valley Irrigation District west of Yuma. But the Tucson congressman says he has no knowledge that a water grab is forthcoming.

“With the extreme drought in California, the fact remains that the Colorado River does become a target to relieve central California and the Imperial Valley farms, agribusiness,” Grijalva said. “I think we need to be very conscious of that and be prepared to fight that.”

Although a water grab wouldn’t float through Congress easily, “as the political and drought situation gets more intense there, you know California will look at more and more sources,” Grijalva added.

The California drought relief bill is being drawn up under the direction of Sen. Dianne Feinstein of that state. Her press secretary, Tom Mentzer, didn’t respond to questions from the Star about the bill.

Although no California water officials have exerted direct pressure on Arizona, “we’ve heard California water managers say Arizona can take deeper shortages over the years because we have so much groundwater,” said the CAP’s Cullom.

The fear is that California would pressure the Interior secretary to force Arizona to use more groundwater so California could take more river water, he said.

Californians also point out that Arizona has about 9 million acre-feet of Colorado River water stored underground for times of shortage. That’s enough to serve roughly 18 million households for a year. Officials here counter that Arizona shouldn’t be punished for saving water for the future.

At a D.C. panel discussion held last week by The Washington Post, Stanton said Phoenix must be ready to “fight to protect our water rights.”

“There’s an old saying … that whiskey is for drinking and water is for fighting over,” Stanton said. “We hope not to get to that point, but we’d better get ready in case.”

With California’s drought hitting unprecedented levels, Arizona must be a part of any conversations about water in this region, Stanton said in a follow-up interview.

“We want to make sure, first and foremost, that we protect what our forefathers were able to get for us,” he said.

Outside experts say a California water grab is unlikely.

The 242-mile California Aqueduct that brings in river water to Southern California’s six-county Metropolitan Water District has no room for more water, said Bill Hasencamp, the district’s Colorado River resource manager. The aqueduct already carries the district’s own allocation, plus extra that it’s bought from Southern California farming districts as well as water it set aside in Lake Mead years ago to use in droughts, he said.

Controversy over such a bill would explode across the West, with other river basin states taking Arizona’s side, fearful of setting a precedent for future grabs, said Douglas Kenney, a University of Colorado water policy researcher.

Environmentalists would also gear up to fight California on any such move, said Joan Clayburgh of the group Western Resource Advocates and Jennifer Pitt of the Environmental Defense Fund.

Collaboration between the states and between the U.S. and Mexico has helped Colorado River management for 15 years, increasing the reliability of everyone’s water supply, while starting to solve some of the river’s worst environmental problems, said Pitt, the fund’s Colorado River program director. “Creating winners and losers threatens that progress.”

Most importantly, California already holds all the cards on water due to the 1968 CAP law, said Kenney and water researchers John Fleck in New Mexico and Brad Udall in Colorado.

While Arizona worries about a theoretical risk from California, it actually should be more concerned about ongoing efforts by Colorado, Utah, New Mexico and Wyoming to build dams and other projects that would take more Colorado River water this state uses, said Kenney. Those states are targeting unused water they already have the legal rights to.

California has the most to lose if the Colorado River compact issue goes back to Congress, said Fleck, who is writing a book on river management that’s scheduled to be published next year by Island Press.

“If anyone has an incentive to break these deals, it’s you guys” in Arizona,” said Fleck, a writer for the University of New Mexico’s water resources program.

Mulroy, a Brookings Institution researcher, says for Arizona “to beat the war drums” against California will drive “even the moderate voices in that state into the bunkers,” which could backfire. She’s concerned that Arizona’s rhetoric could disrupt ongoing negotiations among the seven river-basin states to prevent Lake Mead from dropping to dangerously low levels.

Brad Udall’s father, the late U.S. Rep. Morris Udall, spent nearly 30 years getting the CAP canal built to cover the 336 miles from the river to Tucson, where it now provides our drinking water.

Now, Brad Udall says California essentially owns the rights to Arizona’s CAP water due to the 1968 agreement that his father and uncle, then-Interior Secretary Stewart Udall, signed off on.

As the agreement stands, Arizona will lose all its CAP water once river shortages happen before California loses any of its 4.4 million acre-feet.

So California might not want to fight over Arizona’s CAP rights because when the shortages start in a few years — due to drought and over-allocation — the rights won’t be worth much.

By going after Arizona’s CAP water, said Brad Udall, a Colorado State University research scientist, “California gets nothing at this point.”

Interior nominee pledges to recuse himself from Rosemont issues

Lake Mead, with the Arizona intake towers of Hoover Dam, has shrunk to its lowest point since being filled with the Colorado River in the 1930s. The light ring shows the high water mark.

The dry bed of the Stevens Creek Reservoir is seen on Thursday, March 13, 2014, in Cupertino, Calif. Lack of seasonal rain has meant water shortages for Californians this winter. Gov. Jerry Brown has asked for a 20% reduction in water usage, farmers are forecasting an increase in produce prices and ranchers are being forced to sell cattle at auction at a higher rate.