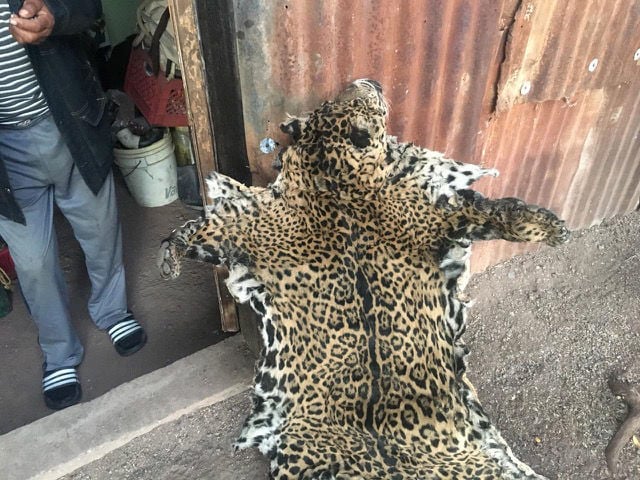 The Northern Jaguar Project obtained this photo. Based on spot patterns, officials believe it’s the same cat that roamed the Huachuca Mountains. 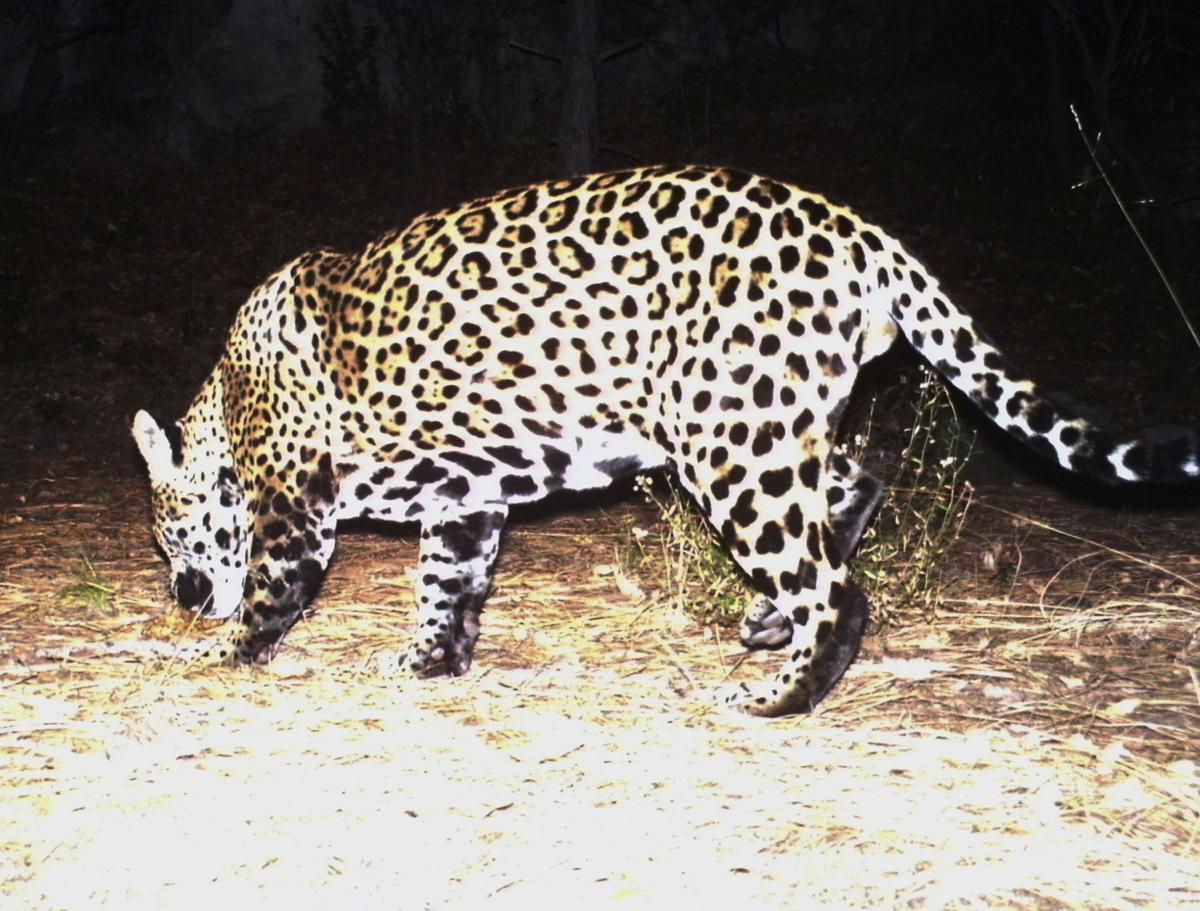 This still image taken from video provided by Fort Huachuca shows the jaguar that was believed killed in Mexico.

A male jaguar that roamed the Huachuca Mountains in 2016 and 2017 is now believed to be dead.

A nonprofit group that seeks to protect northern Mexican jaguars this week provided the Arizona Daily Star with a photo of a jaguar pelt. The pelt “certainly appears to be the same jaguar” photographed in the Huachucas, southeast of Tucson and near the Mexico border, said Jim DeVos, assistant wildlife management director for the Arizona Game and Fish Department in Phoenix.

Six Game and Fish officials looked at the latest photo and compared it to an earlier photo of the Huachucas jaguar. They found “a very high correlation between the two pictures” based on spot patterns in the photos, DeVos said.

Jim Rorabaugh, a retired U.S. Fish and Wildlife biologist, said he also looked at both photos and believes they are of the same cat.

The last time the Huachucas jaguar was photographed by an official camera was in March 2017. It was first photographed in that mountain range on Dec. 1, 2016, by a camera owned by the University of Arizona, which has been photographing and studying jaguars in the U.S. since 2012. The jaguar is listed as an endangered species in the U.S. and Mexico. Killing jaguars is illegal in both countries.

The photo was provided to the Star by the Northern Jaguar Project, a Tucson-based group that operates a reserve in Sonora aimed at protecting jaguars. Group officials don’t know when the pelt photo was taken or who took it, said Carmina Gutierrez Gonzalez, a jaguar project biologist. But they know it was taken in Mexico, said Diana Hadley, the group’s board president.

The group’s biologists also confirmed that the jaguar pelt photograph was of the same animal that was photographed in the Huachucas.

Jaguar project officials declined to say where they got the photo. The jaguar project works regularly with ranchers living near the reserve, including paying them every time a jaguar is photographed on their properties.

They said that releasing information about the source of the photo could hurt their ability to work with ranchers, whose support for the project’s work is needed.

Law-enforcement officials with the U.S. Fish and Wildlife Service, which enforces the Endangered Species Act, say that if they can obtain information about the dead jaguar “that can be corroborated” with information from other sources, “we may look into the matter some more,” said Jeff Humphrey, a wildlife service spokesman based in Phoenix.

“There’s not much more to say. We don’t know any of the specifics — where, when, how. We’re trying to get as much information as we can,” DeVos said.

This case offers a perfect example of “why we need jaguar conservation in Mexico so we don’t have a tragedy like this again,” said Hadley, president of the Northern Jaguar Project.

It’s been known for many decades that jaguars are under poaching pressure, said Randy Serraglio, a conservation advocate for the Tucson-based Center for Biological Diversity.

“That is all the more reason to protect habitat on both sides of the border, to give them safe places to live,” Serraglio said.

This animal was photographed very close to the border several times in the United States, he said.

Last year, students at Hiaki High School, a Tucson charter school catering to Yaqui students, voted to name the Huachucas jaguar Yo’oko, the Yaqui word for jaguar, in an effort arranged collaboratively by the center and the nonprofit group Conservation CATalyst.

“The real tragedy is having to explain to those kids at Hiaki High School that somebody killed their jaguar,” Serraglio said.

Seven male jaguars have been seen in the Southwest since 1996, all but one in Arizona.

UA cameras previously photographed another jaguar in the Santa Rita Mountains near the site of the proposed Rosemont Mine from fall 2012 through October 2015. That jaguar hasn’t been seen since then.

In addition to the Huachucas jaguar, the other U.S. jaguar known to have died since 1996 was Macho B, which was euthanized at the direction of state and federal biologists at the Phoenix Zoo in March 2009 at age 15. That followed his capture, radio-collaring and recapture after the animal weakened dramatically in the wild.

Jaguars are much more common in Mexico, which is believed to be the source of the male jaguars that have been photographed in the U.S. in recent decades.

Each individual jaguar has a unique pattern on its fur of black spots that form rosettes of different sizes. The rosettes are like fingerprints of the animal that identify each animal.

It's the first confirmed jaguar sighting ever at Fort Huachuca.

A male jaguar was photographed in the Santa Rita Mountains 118 times over three years.

Jaguar gets new layer of US protection

Nearly 17 years after gaining endangered status in the United States, the jaguar on Tuesday got nearly 765,000 acres of legally designated pri…

Tucson police confirmed that the individuals involved in the shooting are family.

A man injured in a vehicle collision last week has died.

1 dead in house fire on Tucson's northwest side

An early morning fire destroyed a home just northwest of Tucson, according to the Northwest Fire District.

2 arrested on suspicion of drug trafficking in Cochise County

Two individuals were arrested in Cochise County on suspicion of drug trafficking, according to a news release from the sheriff's office.

Tucson police need help finding the woman from a series of recent thefts.

Fire department being assisted in probe by ATF agents.

The group consisted of immigrants from Nicaragua, El Salvador, Guatemala and Honduras, a news release said.

Tucson weather: Above 100 degrees most of week

This week, expect hot weather. Lots of it.

The Pima County Sheriff's Department is asking for the public's help in identifying the suspect in an apparent armed robbery.

Residents were able to evacuate safely.

Longtime ESPN Radio host is moving on, buy says he'll miss the people the most.

Officials were at the scene of a semi crash near Interstate 10 and Miracle Mile on Monday afternoon.

Tucson could get some rain over the weekend.

Colorado cares for bear cub that burned its paws in wildfire

DURANGO, Colo. (AP) — An orphaned bear cub that suffered painful burns to her paws in one of a half-dozen wildfires scorching Colorado is bein…

Chances for thunderstorms increase near the end of the week.

Arizona Republicans are among sponsors of the bills introduced in Congress to allow more local input and encourage voluntary conservation efforts.

EPA's regional office, which has opposed the mine for years, says it won't elevate the Rosemont permit to its national office for further review.

The Northern Jaguar Project obtained this photo. Based on spot patterns, officials believe it’s the same cat that roamed the Huachuca Mountains.

This still image taken from video provided by Fort Huachuca shows the jaguar that was believed killed in Mexico.