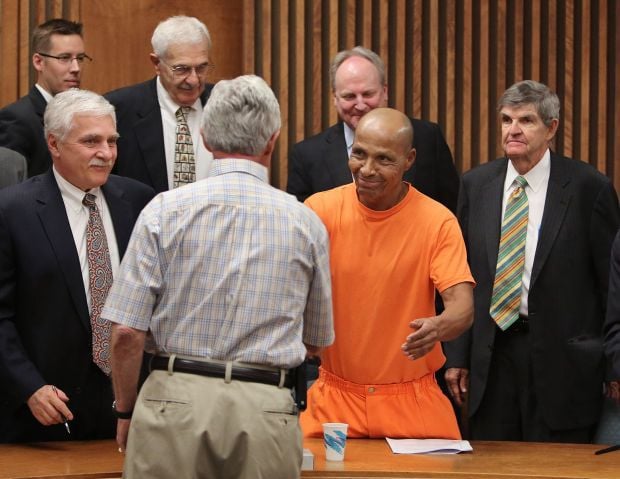 Louis Taylor was released in 2013 after more than 40 years in prison. A deal with the government vacated his convictions. 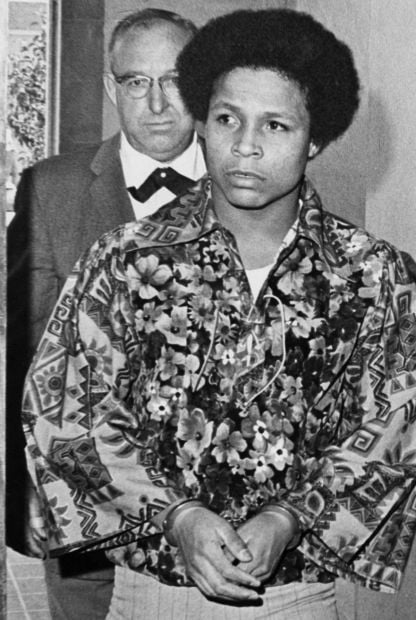 Louis Taylor was 16 when the Pioneer Hotel fire broke out. 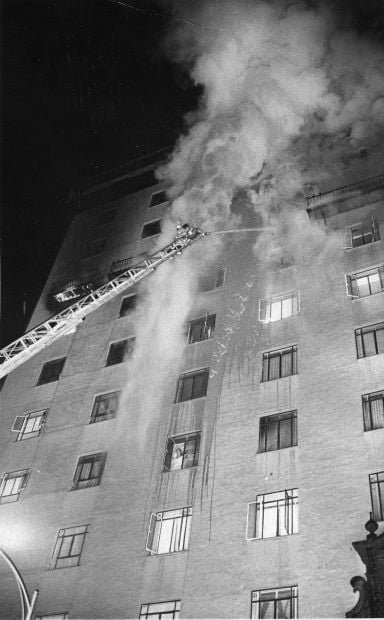 In a Dec. 20, 1970 file photo Tucson, Ariz., firefighters apply a steady stream of water during the Pioneer Hotel fire , that resulted in 29 deaths. Louis Cuen Taylor who spent more than four decades in prison for the hotel fire before he was released Tuesday, April 2, 2013, as part of a deal with prosecutors.

Louis Taylor, who served four decades in prison for the downtown Pioneer Hotel fire in 1970, was arrested Thursday in connection with an armed robbery.

Tucson police arrested Taylor, 63, after video surveillance at the Riverpark Inn on West Cushing Street showed him walking behind the counter where the clerk was standing and demanding money.

Taylor took an undisclosed amount of money in the robbery in June, police said, and assaulted the clerk with a baseball bat, causing minor injuries. He then fled the hotel. Video and forensic evidence collected at the scene resulted in the positive identification of Taylor, police said.

The arrest came four years after he was released from prison, where he served more than 40 years following his 1972 conviction for killing 28 of the 29 people who died in the hotel fire in 1970. He was sentenced to 28 concurrent life sentences.

Legal advocates launched a yearslong campaign to free him, alleging the prosecution withheld evidence, communicated inappropriately with jurors and spoke with the judge without defense lawyers present. Advances in forensic fire science also cast doubt on the methods used by fire investigators at the Pioneer Hotel.

“It really just shows the terrible effect the criminal justice system can have,” Feinman added.

Taylor, who was 16 years old when the Pioneer fire broke out, maintained his innocence throughout his time in prison. Through a plea agreement with the Pima County Attorney’s Office, Taylor pleaded no contest to the murder charges in 2013 and was released.

Taylor declined to be interviewed by the Arizona Daily Star for this story. But in the years since his release, he told Star reporters about his struggles. The outpouring of financial support that came with his much-publicized case, including an online fundraising campaign, didn’t last and he found himself living outdoors at times.

“He’s been homeless for a while now,” said Andy Silverman, a law professor at the University of Arizona who worked on Taylor’s case for about 15 years with the Arizona Justice Project.

“He had nothing, other than what supporters would give him now and then,” Silverman said.

Although Taylor is a “smart guy” with an “amazing memory,” he grew up in prison and left without any particular skills, Silverman said.

In the armed robbery case, Feinman said he plans to ensure that the “problems that plagued” the 1972 trial don’t occur again.

County Attorney Barbara LaWall could not be reached for comment.

At a news conference after the 2013 hearing, LaWall said “justice would best be served in light of unique facts of this particular case by allowing Louis Taylor to plead no contest at this time, whereupon the court then could affirm his guilt and then he would receive time served in this case of 42 years.”

A year after Taylor was released and in the midst of a nationwide movement to investigate claims of innocence made by prisoners, the County Attorney’s Office created a Conviction Integrity Unit.

Unklesbay is the sole lawyer assigned to the unit, which he said is designed to see if those claims can be substantiated. He hasn’t found any cases in which prisoners have been “factually innocent,” but the unit has helped release several people who “didn’t get a fair shake at sentencing.”

One example he gave was Eddie Collins, who was released from prison in 2016 after serving more than 40 years for his role in a murder in which his brother killed a man.

Providing support for recently released prisoners “would be a wonderful thing,” Unklesbay said, but the County Attorney’s Office does not have the funds for it.

Instead, they depend on community-based programs that are “few and far between,” especially when it comes to helping those with mental illnesses or substance abuse problems, he said.

Taylor will remain in custody until his July 24 preliminary hearing, Feinman said. His bond is $4,500.

After year of freedom, Taylor struggles to adjust

Louis Taylor, convicted for the deadly 1970 Pioneer Hotel fire, has sued the city and county for civil rights violations.

Louis Cuen Taylor﻿ spent most of his life living in the structured environment of prison.

Thirty-one restaurants failed June inspections by the Pima County Health Department. Here are all of them.

Another dog left at the home was severely malnourished and dehydrated.

Taylor served four decades in prison in connection with the fire.

Louis Taylor was released in 2013 after more than 40 years in prison. A deal with the government vacated his convictions.

Louis Taylor was 16 when the Pioneer Hotel fire broke out.

In a Dec. 20, 1970 file photo Tucson, Ariz., firefighters apply a steady stream of water during the Pioneer Hotel fire , that resulted in 29 deaths. Louis Cuen Taylor who spent more than four decades in prison for the hotel fire before he was released Tuesday, April 2, 2013, as part of a deal with prosecutors. 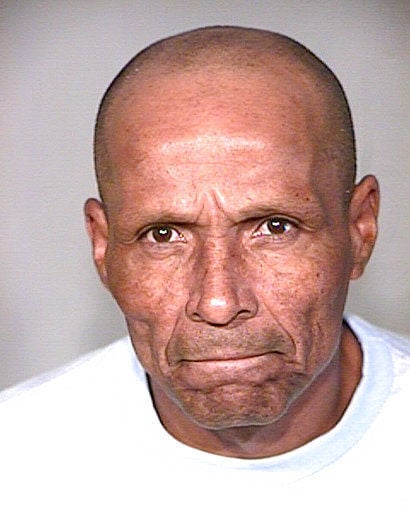