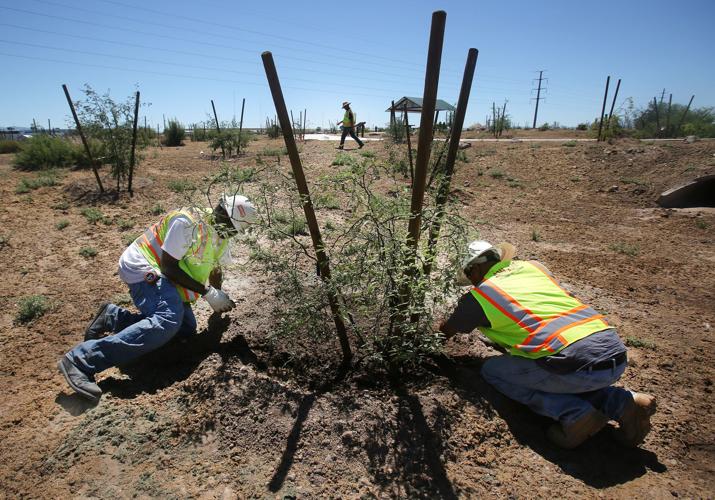 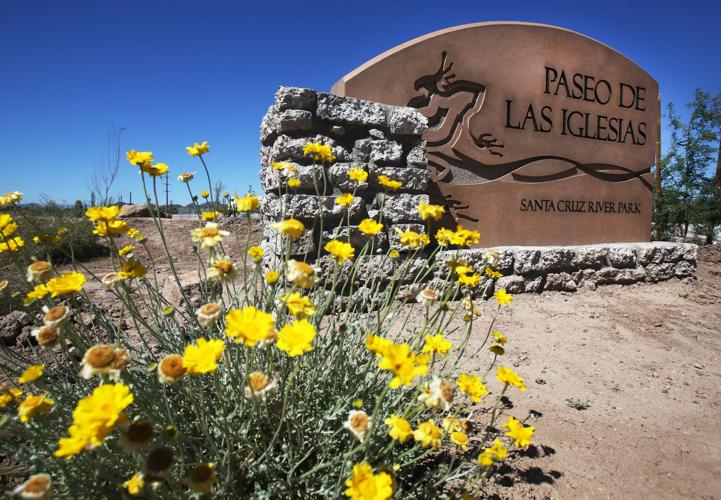 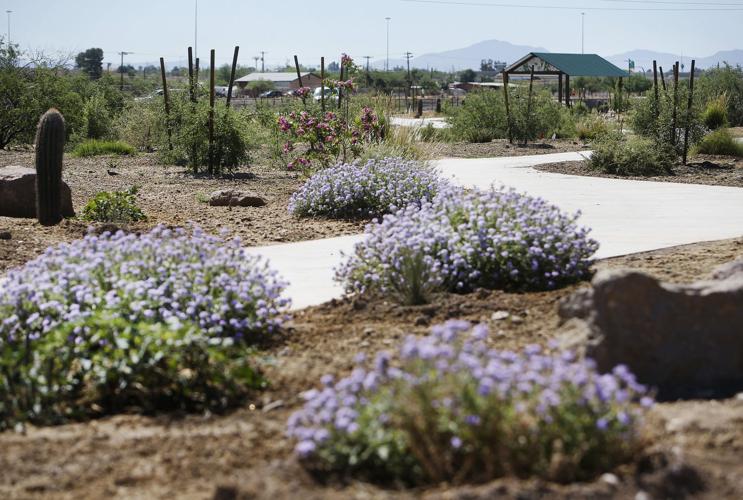 A view across the landscaped portion at the new Paseo de Las Iglesias trail segment of The Loop near Santa Cruz River Park and West Silverlake Road on Tuesday, April 28, 2015, in Tucson, Ariz. The trail portion, which extends from Silverlake to West Ajo Way, officially opens Saturday.

A much-anticipated new segment of The Loop trail system called the Paseo de las Iglesias will be opened Saturday at a celebration along the trail.

The name of the segment — which extends about 1.5 miles along the Santa Cruz River from Silverlake Road to Ajo Way — is a reference to “the path between the churches.” That’s because it lies generally in an area between the historic Mission San Agustin site and Mission San Xavier del Bac.

Features along the route include interpretive signs describing the area and its history, perches for raptors, lizard habitats and a water-harvesting basin.

“Paseo de las Iglesias is a critical connection with other segments of The Loop,” said Deirdre Brosnihan, project manager for the Pima County Regional Flood Control District. The county oversees the trail system for nonmotorized travel that loops around the Tucson metro area and now totals more than 100 miles.

“I have spoken to so many residents of the area who have been looking forward to this and are excited to have the new pathway connection,” Brosnihan said. “It will be great to have people come out and ride or walk the trail, but the opening celebration will also have lots of information on history and biology” of the area.

She said the trail route “is not just a pretty landscape but also habitat” for animals.

The installations to benefit wildlife include about a half-dozen raptor perches. Lizard habitat was constructed from naturally occurring rock and rubble that was on the site, Brosnihan said.

Activities at the opening celebration, which runs from 9 a.m. to noon Saturday at Santa Cruz River Park near Silverlake Road, include:

• What: Opening celebration for the Paseo de las Iglesias segment of The Loop trail system

For Star subscribers: After what looks to be a surprise GOP primary win, Democrats think they have a chance to win the state Senate seat in Legislative District 17.

A coffee shop is opening at an iconic Tucson monastery

For Star subscribers: A Tucson-based coffee roaster is opening its flagship location at the iconic Benedictine Monastery in midtown.

Here's why your recycling sometimes ends up at a Tucson landfill

Find out more on what can — and can not — be recycled in Pima County and where it all goes.

The Arizona GOP candidates who benefited from Trump's endorsement rashly accused the FBI of bias for searching his home.

For Star subscribers: Environmental groups' report blasts U.S. for failing to deal with risks to Glen Canyon Dam's ability to deliver water to Colorado River states including Arizona when Lake Powell is at low elevations.

For Star subscribers: A jaguar known as El Jefe last photographed in the Santa Rita Mountains southeast of Tucson in 2015, is the same cat photographed in November in Sonora, conservation groups say.

Sen. Kyrsten Sinema knows how to use her leverage to benefit Arizona, but it wasn't very centrist of her to use that power to protect wealthy investors.

For Star subscribers: With 1 million square feet of office space available in Tucson that was not vacant pre-pandemic, a new approach is needed to get employees to return.

This wearable human-machine interface could be the future of devices

This wearable human-machine interface could be the future of devices

A view across the landscaped portion at the new Paseo de Las Iglesias trail segment of The Loop near Santa Cruz River Park and West Silverlake Road on Tuesday, April 28, 2015, in Tucson, Ariz. The trail portion, which extends from Silverlake to West Ajo Way, officially opens Saturday.