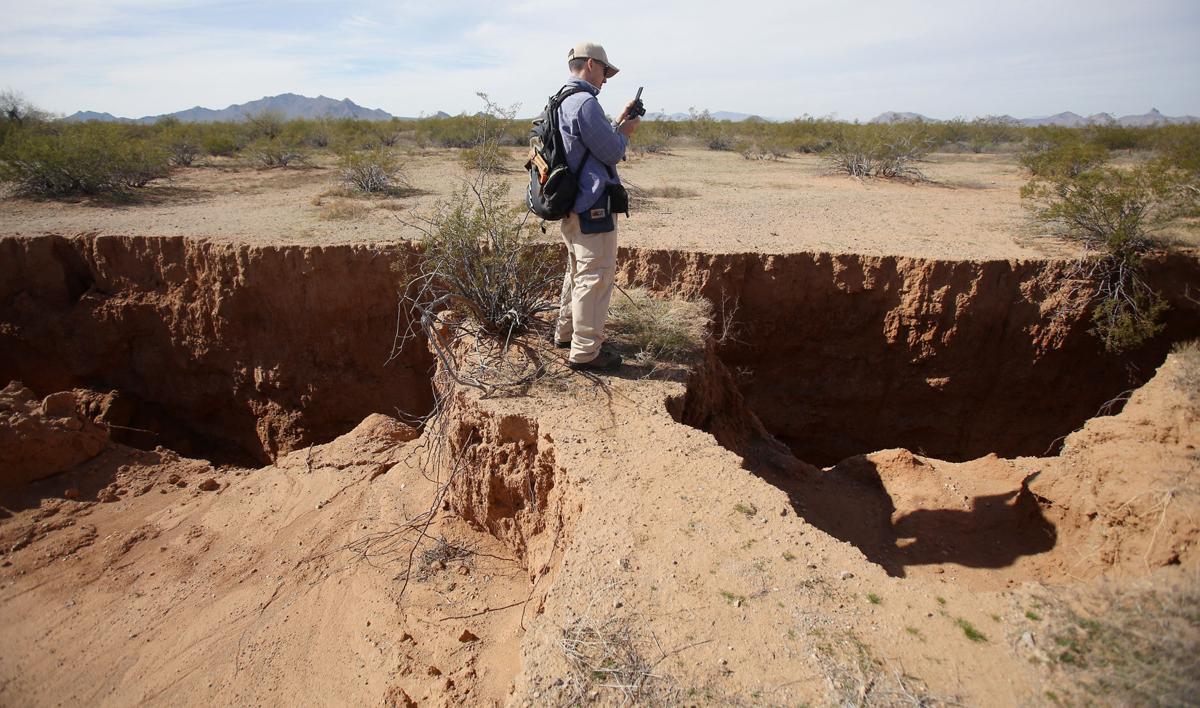 Geologist Joseph Cook takes a photo of a portion of the 1.8-mile-long earth fissure discovered on Arizona state trust land south of Eloy. 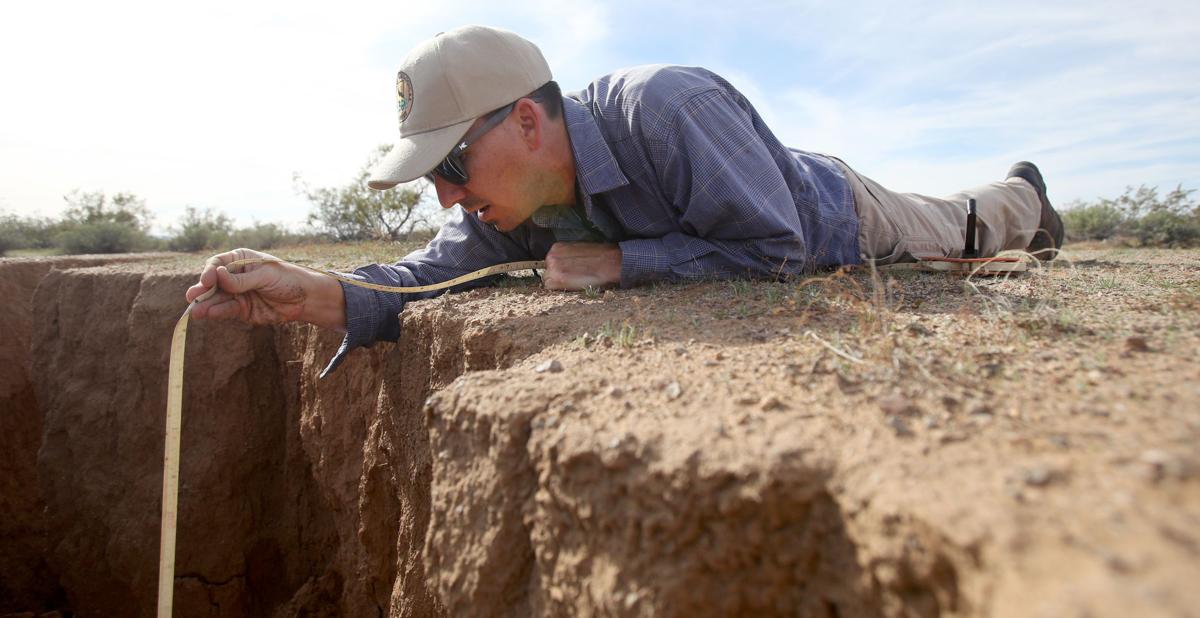 Cook says in some places the fissure is “deep enough that you wouldn’t want to fall in.” 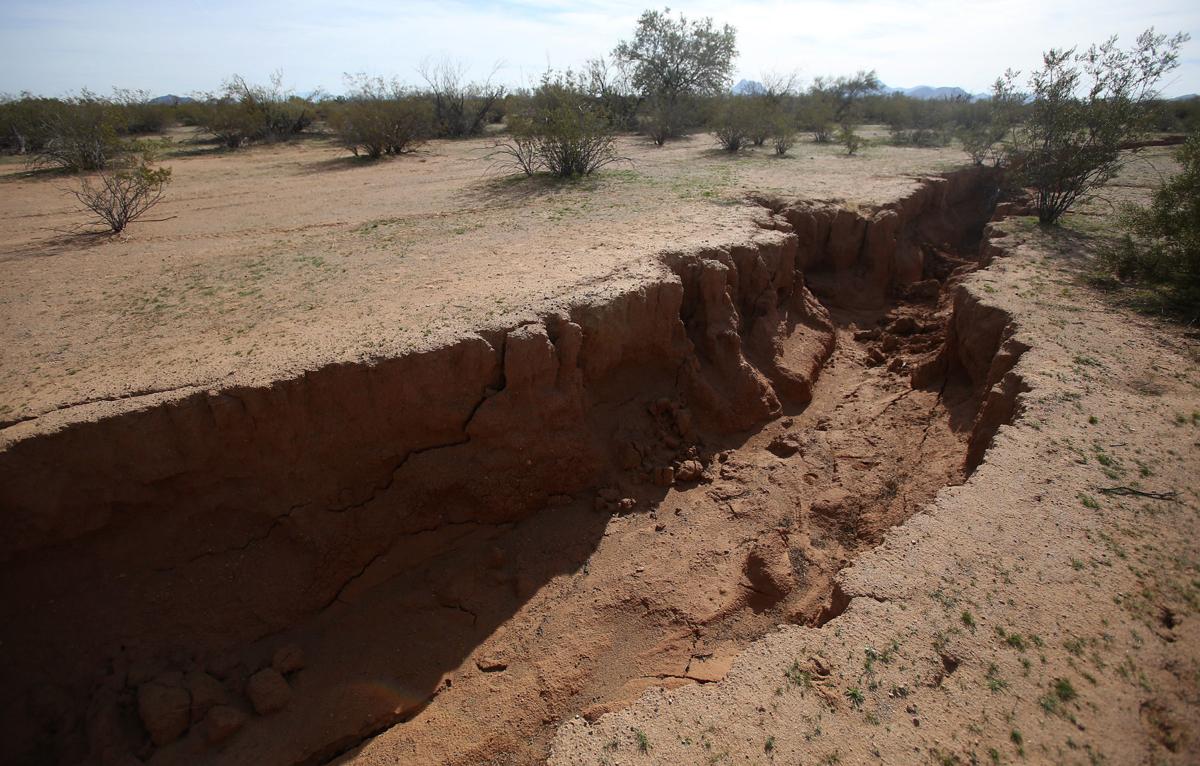 This 1.8-mile-long earth fissure was discovered several years ago about a dozen miles south of Eloy. Groundwater pumping can lead to subsidence, the ground settlement that triggers fissures. It’s a persistent and worsening problem in some rural areas of Arizona. 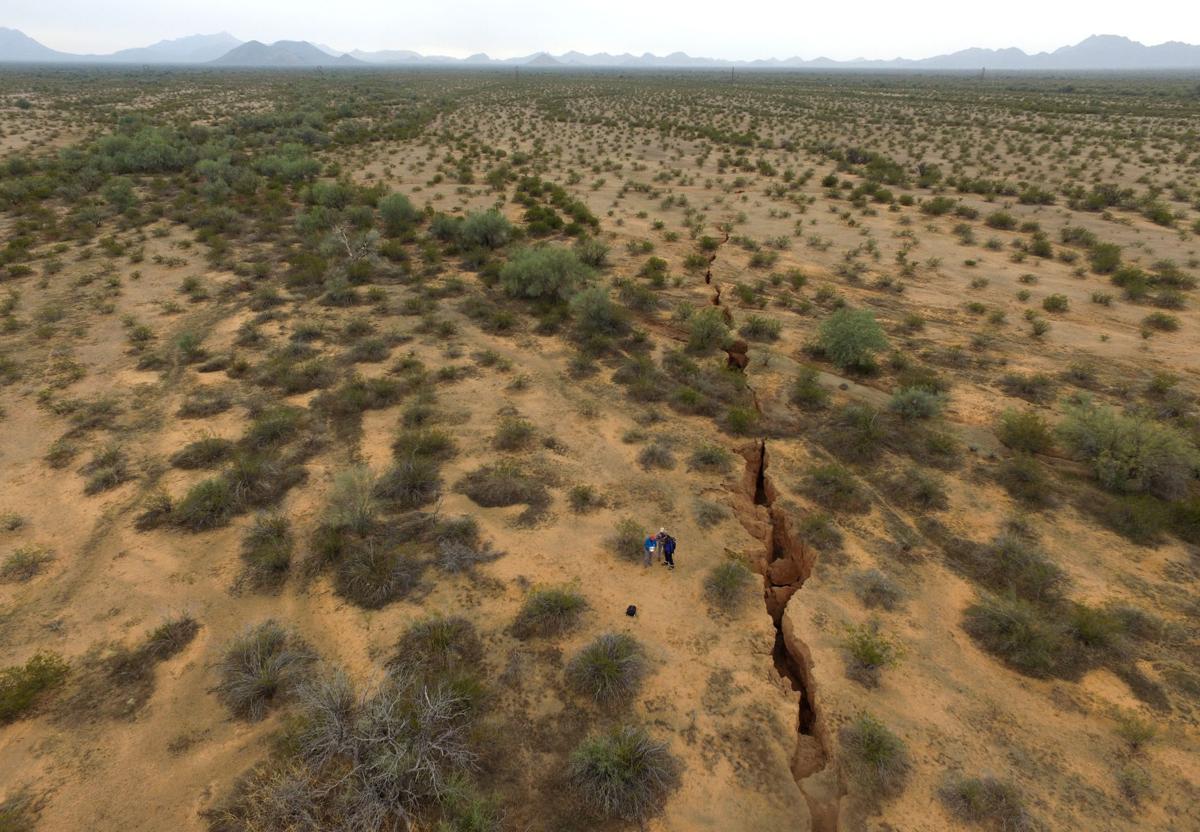 Fissures are less likely to pop up around Tucson, thanks to strict regulations on pumping. Rural areas see the opposite. 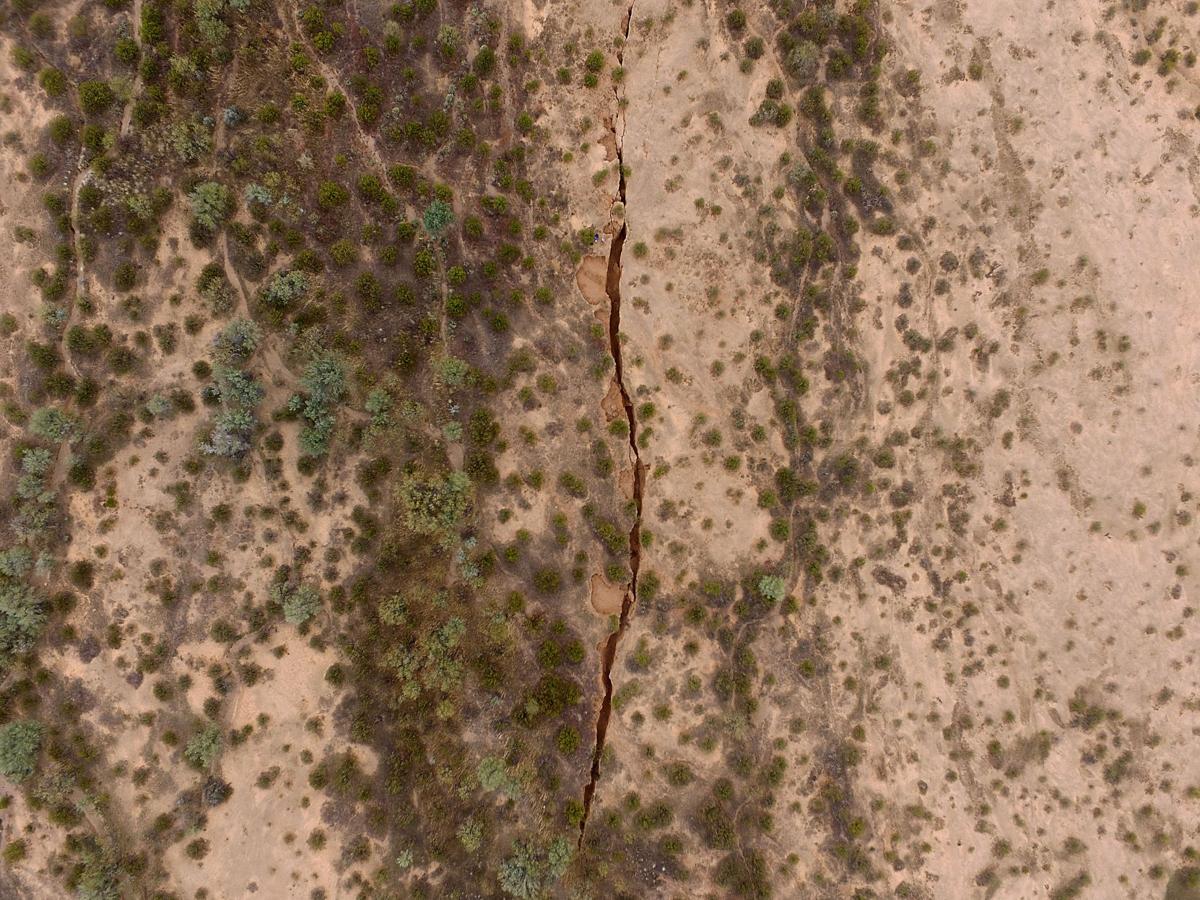 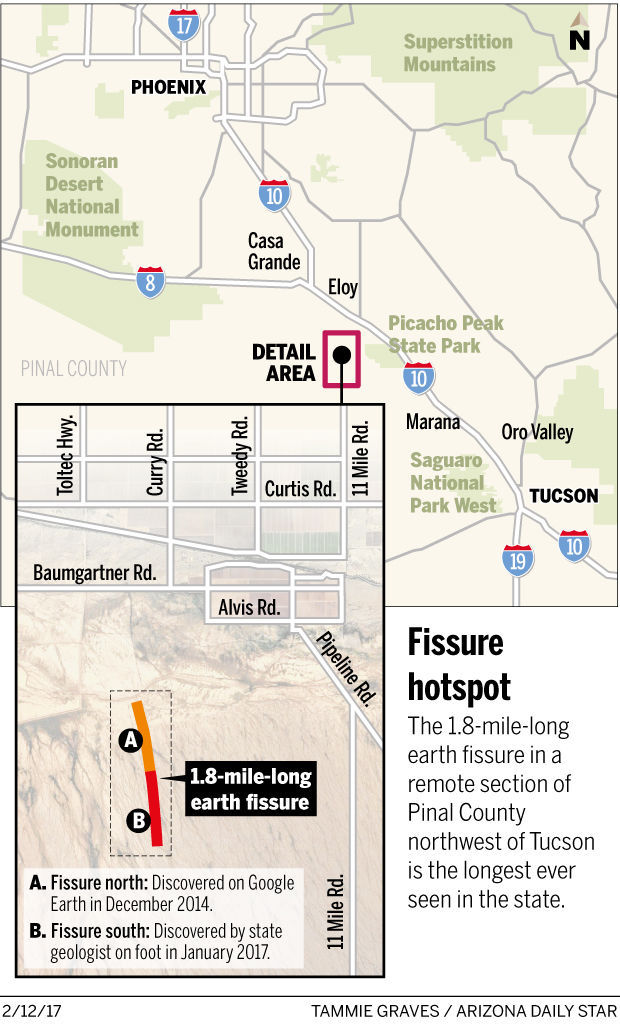 At first, the ground crack is a few inches wide, as it cuts south from a dirt road through mesquite-and-creosote flats about a dozen miles south of Eloy.

Slowly, it opens up, at times wide enough to swallow a quad vehicle and deep enough that you can’t see bottom. Back and forth, the fissure narrows then widens, grows deeper then shallower, until petering out nearly two miles later.

“This is the longest single fissure ever discovered in Arizona,” geologist Joe Cook said recently as he walked along it. Up to 10 feet wide and 27 feet deep, “it’s deep enough that you wouldn’t want to fall in.”

It is also Arizona’s newest physical evidence of the impacts of chronic over-pumping.

The groundwater pumping leads to subsidence, the geologic phenomenon of ground settlement that triggers fissures. It’s a persistent and worsening problem in some rural areas, even as other areas have replaced groundwater with Colorado River water.

Lying about halfway between Tucson and Phoenix, west of Picacho Peak and north of Ironwood Forest National Monument, this fissure was discovered in two parts. The northern half appeared in December 2014 in Google Earth satellite images. The southern half, which hasn’t shown up on Google yet, was discovered Jan. 12 by Cook, manager of the Arizona Geological Survey’s fissure mapping program.

It’s one of hundreds if not thousands of earth fissures across the state. First discovered in the Picacho-Eloy area in 1927, Arizona’s fissures total about 170 miles today and are increasing in number yearly. About 70 miles of fissures have opened in this area alone, the state water agency said in a new report.

While no humans have fallen in, at least in Arizona, fissures are a known hazard to animals, having swallowed a 1,500-pound horse and a number of cattle over the years.

Across the state, the cracks have undermined roads, homes, power lines, sewer lines, irrigation canals and one section of Central Arizona Project aqueduct. They can be conduits for contaminants traveling to the aquifer, and sometimes become dumping grounds for people’s unwanted pharmaceuticals, tires, garbage and even refrigerators.

“I think it’s a little shocking that we’re causing these huge cracks to form in the landscape,” Cook said. “Isn’t it a rude awakening — a wake-up call?”

Fissure creation could speed up if and when Lake Mead drops low enough to trigger a Colorado River shortage that curtails CAP deliveries to farmers, said Cook, state water officials and Brian Betcher, general manager of a Pinal County irrigation district. Then, farmers could step up their groundwater pumping, triggering more subsidence.

For now, this giant crack aside, the state’s most active fissuring is in the Willcox groundwater basin in Cochise County, said state officials. There, unregulated groundwater pumping has increased in recent years as more farmers have moved in and sunk new wells.

Forty-two miles of earth fissures are known in the Willcox area. Nearly 20 miles have opened up in the neighboring San Simon-Bowie area.

In both the Willcox and the Eloy-Picacho areas, said geologist Cook, “every time I look at Google Earth, I see another fissure.”

Subsidence and fissuring are problems across the arid West. In the 1970s, fissures undermined home foundations in North Las Vegas, causing $14 million in damage. In California, a new NASA study shows that subsidence from over-pumping in the drought-stricken Central Valley has caused a 2-foot drop in sections of the California Aqueduct, limiting its ability to deliver water to 25 million people and nearly a million acres of farmland.

In Arizona in July 2007, a fissure opened and swallowed a horse, after a thunderstorm dropped 2 inches of rain in an hour and eroded ground at the Maricopa-Pinal County border. Known as the “Y-Crack,” the fissure had opened and been backfilled several times before. This time, water undermined the backfill, leaving a hole 40 feet deep and 15 feet wide. A 13-year-old horse named Cash fell in and died despite 15 hours of rescue efforts.

In the late 1990s, workers discovered a section of CAP canal in Scottsdale was sinking because of land subsidence. Project officials spent $350,000 fixing the problem. And in September 1992, more than $3 million in damage occurred at Luke Air Force Base west of Phoenix when subsidence caused the slope of a drainage facility to reverse, sending floodwaters to the base.

A 9-mile-long discontinuous earth fissure in the Picacho-Eloy area crossing Interstate 10 has repeatedly damaged the freeway and required repairs. In the Phoenix area, authorities had to spend $200,000 to prevent damage from a fissure crossing the Red Mountain Freeway during its construction.

In agricultural areas of Pinal and Cochise counties, the fissures aren’t as big a threat because few people live nearby, officials say.

At Dragoon and Kansas Settlement roads, “the county consistently backfills it and puts up warning signs,” said Murray McClelland, a longtime area resident and former president of the Pearce-Sunsites Chamber of Commerce. That fissure has also ruptured a nearby high-pressure natural-gas line.

As Cook walked along the newest Pinal County fissure, he recalled pulling a calf out of one near Elfrida in Cochise County a few years ago.

“I was mapping a fissure and a saw a big white triangular thing down there — a cow’s face, only a few feet deep. It was stuck in the mud,” Cook said. “Me and another guy had to lever it out, seesawing it back and forth.”

Pointing to the new fissure, he added, “If a cow is in this thing, I’m sorry, cow. I’m not going to get you out.”

Fissures can exist for years or decades underground before they’re even seen.

Often, they open only after monsoon storm waters erode the ground and seep into existing cracks. Many fissures that could form above ground in the future probably exist today, undetected.

For the root cause, scientists blame “differential subsidence,” when adjoining sections of land decline at different rates as groundwater is pumped.

In Arizona, where groundwater over-pumping was rampant until the CAP arrived, more than 3,400 square miles have subsided in at least 26 separate areas, said the new Arizona Department of Water Resources report.

Only one known fissure has formed in Pima County — in the Avra Valley in 1981. Since then, subsidence from groundwater pumping has declined here because of the retirement of farms and arrival of the CAP.

No one can say whether the new fissure was triggered by old or recent pumping. Since CAP water arrived in 1986, Pinal farmers’ groundwater pumping has dropped two-thirds, but it started rising again in this decade.

The subsidence that caused this crack “was likely caused by the collective impacts of groundwater withdrawals over several decades,” the state water agency said.

Brian Betcher, general manager of the Maricopa-Stanfield Irrigation District north of Eloy, said he suspects the cause is historic pumping because despite recent increases in groundwater use, “we’re not even near those levels of pumping in the 1960s and ’70s.”

As Cook walked along the new fissure, he recalled that when its northern end was discovered in 2014, it was deeper and wider than now. Much of it has filled in with sediment dumped by big storms. That’s happened to many other fissures and will eventually happen to this fissure’s southern end, he said.

But longer-term solutions to fissuring are more elusive. The Arizona Department of Water Resources has held five planning meetings on water in the Willcox area since March 2016. There’s been “zero” progress, said former chamber president McClelland. While some farmers there are willing to self-regulate their pumping, other landowners including ranchers see that as a violation of property rights. Another meeting will be held by this spring.

In Pinal County, efforts to arrest groundwater pumping are hampered because the 1980 Groundwater Management Act, while “terrific up to a point, doesn’t really give the department the tools it needs to stop the overdraft completely,” said Kathleen Ferris, former director of the state commission that drafted that law.

For example, the state water agency has the right to impose a pump tax on farmers to raise money to buy and retire farmland, said Ferris, who ran the department in the 1980s. But the tax is limited to $2 an acre-foot, “and we’ve known from the beginning that it wouldn’t generate enough money to buy much ag land and put it out of production,” she said.

A great deal of the subsidence in the Pinal area stems from compaction of fine-grained sediments that lost water.

Such subsidence, she said, “is permanent and irreversible.”

Drone visual of a fresh earth fissure in the Tator Hills area, southern Pinal County. AZGS is experimenting with drone technology as a tool fo…

Photos: Devastating floods of 1983 in Arizona

The October 1983 flood was the largest flood of record in the Tucson area. Between 6 ½ to 7 ½ inches of rain fell across the area in five days…

In Bowie, faucets weren't supposed to trickle to a stop

Water for farming remains available, but residents are urged to cut back.

That's because the Central Arizona Project would see a big savings in its energy costs to pump water.

The Bureau of Reclamation's plan may spark a broader effort to make it as economical to leave effluent in rivers as to take it out.

But getting a new rule to replace the controversial "Waters of the U.S." will take a long time — if it survives court challenges.

The good news is called "bittersweet" after reduction of the survey's holdings and staff.

The fissure opened up to 9 to 10 feet deep and a couple feet wide, closing a five-mile stretch of the main route between I-10 and Douglas.

Geologist Joseph Cook takes a photo of a portion of the 1.8-mile-long earth fissure discovered on Arizona state trust land south of Eloy.

Cook says in some places the fissure is “deep enough that you wouldn’t want to fall in.”

This 1.8-mile-long earth fissure was discovered several years ago about a dozen miles south of Eloy. Groundwater pumping can lead to subsidence, the ground settlement that triggers fissures. It’s a persistent and worsening problem in some rural areas of Arizona.

Fissures are less likely to pop up around Tucson, thanks to strict regulations on pumping. Rural areas see the opposite.