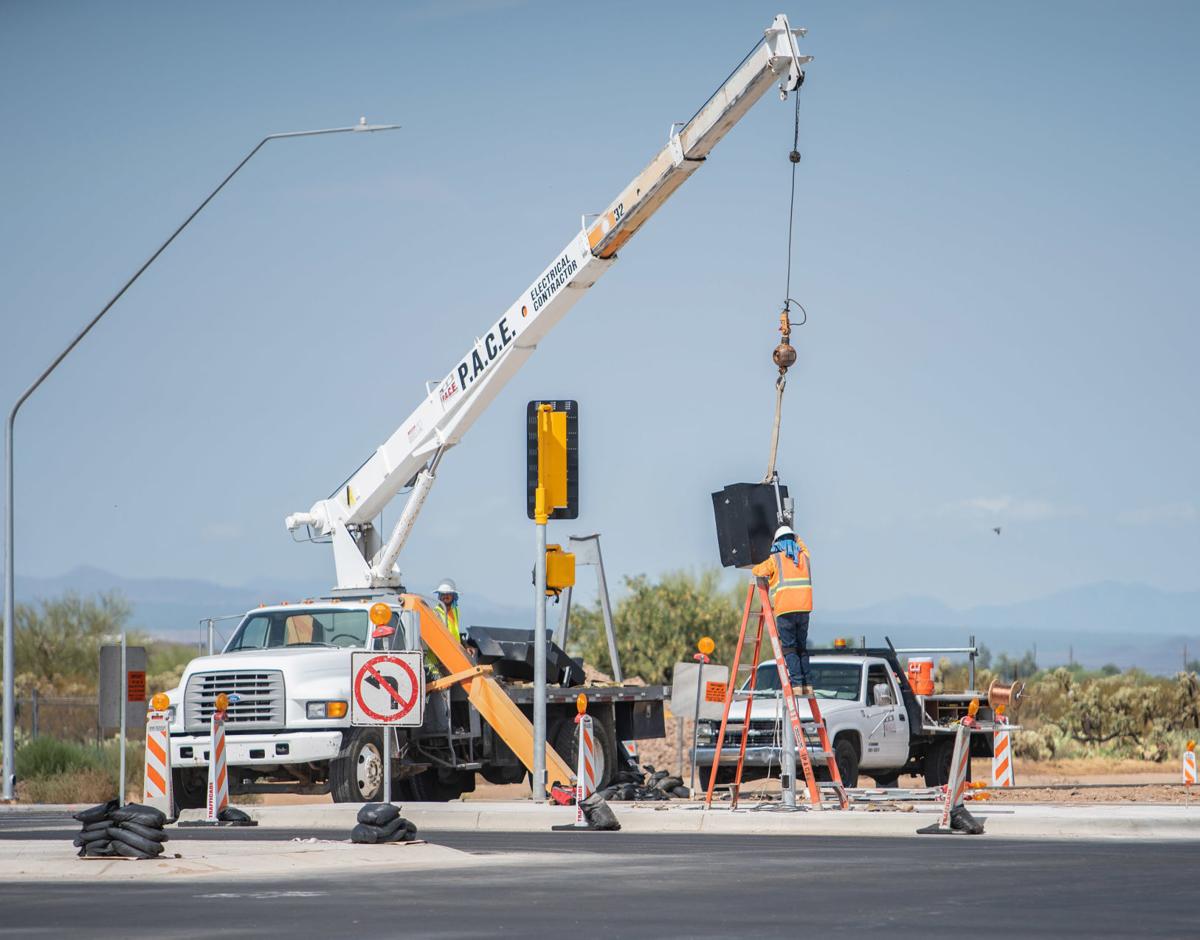 Construction workers use a crane to install a crosswalk light at the intersection of East Valencia and South Kolb roads. The road project cost an estimated $19 million and is expected to be completed this month. 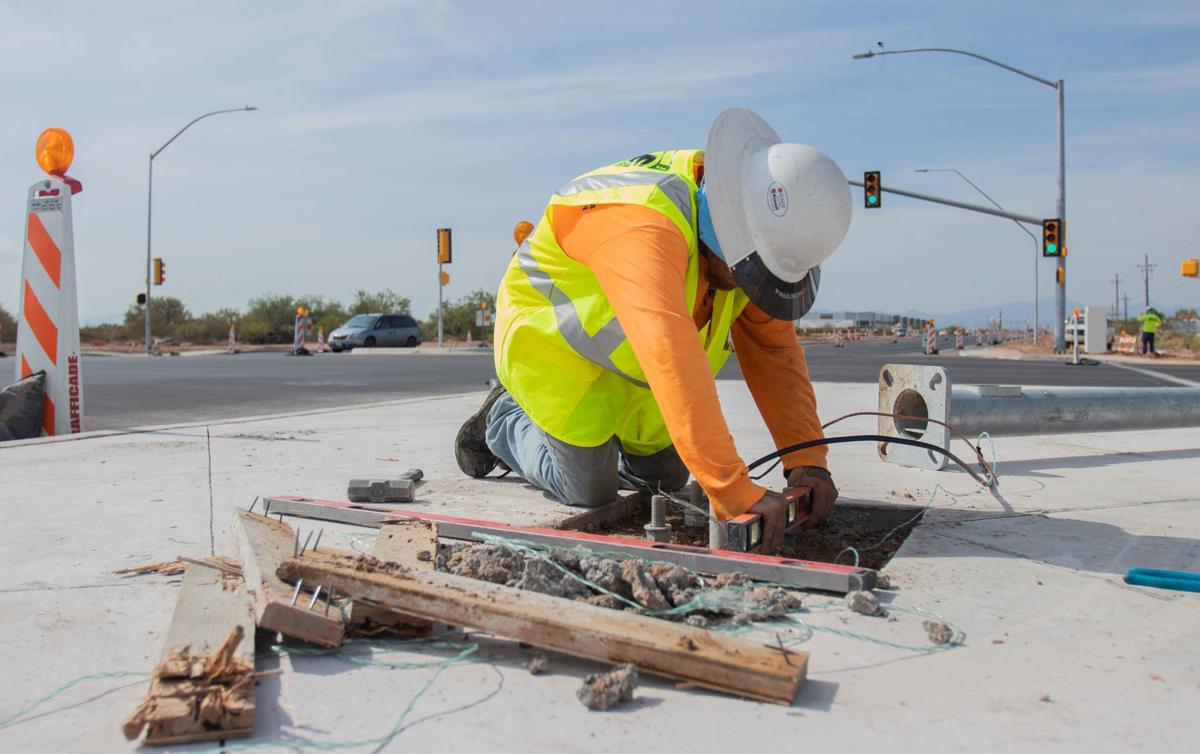 A construction worker prepares electrical wiring for one of the traffic signals at the overhauled intersection at East Valencia and South Kolb roads.

You might not recognize the area near East Valencia and South Kolb roads after the completion of a nearly $19 million road project later this month.

The new parkway-at-grade intersection has features we’ve seen before, such as “Michigan” lefts, which the Tucson Department of Transportation says are safer. There are also new bike lanes, sidewalks, drainage and landscaping, Tucson officials said.

“That intersection is one of our busiest for traffic volume in the city and the pavement on all four of those legs of the intersection was in failing condition,” said Blake Richards, one of the project managers for Tucson’s transportation department. “It was a much-needed project for the quality of the ride out there but also to address some of the conflicting traffic movements.

“The new configuration should help alleviate that a lot and help things run smoother.”

The main design change has eliminated the approximately 1,000-foot left-turn lanes that would cause a backup due to morning and afternoon rush-hour traffic. The indirect left turns prevent motorists from turning at the intersection with the “Michigan” left, forcing drivers to continue on to a marked U-turn area and be sent back to make a right turn.

“People are happy. Overall the project went pretty quickly, we kept it to one year of construction time and people were slowing down giving thumbs up. They’re excited that it’s going to be opening up,” Richards said.

Now that travel has changed, here’s what motorists will find if they:

This was done all in the name of safety and efficiency, said Michael Graham, spokesman for Tucson’s transportation department.

“It’s safer because most collisions at intersections involve a left-turning vehicle and usually you have a left-turn collision with a vehicle going through and those collisions can be pretty bad,” Graham said.

The project also created the need to establish new connections to businesses, like the Circle K on South Kolb Road at the southeast corner of the intersection. Crews maintained access to businesses like this one for the length of the project.

“When they first started it, it was really slow and now that they’ve opened it up a little bit more it’s picking up for sure,” said Rey Vivas, a clerk at the store, who’s seen the number of customers increase recently.

He said his managers were updated about the road configuration changes from transportation officials.

Also, the ride to work is not bad.

“I come down from Valencia, so it’s still pretty accessible for me at least,” Vivas added.

But the process is going to take some getting used to for some motorists.

Ray Hasenstab, a Rita Ranch Neighborhood Association board member for 15 years, said not everything went perfectly fine throughout the yearlong construction process.

“My one takeaway is they could’ve done a much better job at traffic management and inconvenience to the commuters,” he said after experiencing the delays and road closures throughout the process.

He also said he’ll take the “wait and see” approach on this project before deciding how impactful it really is to the area.

A ribbon-cutting ceremony will be held on August 15 at 9 a.m. at the southwest quadrant of the intersection.

“Our top priority here in transportation is safety, so anything we can do to make a safer intersection for pedestrians, bicyclist, motorists, were going to do it,” Graham said.

Ramp closure set for I-10 at Valencia Road

The Interstate 10 off-ramp to Valencia Road will close Monday night for guardrail repairs.

The work will last from 7 p.m. to midnight.

Motorists should detour to Craycroft Road during the work.

Overnight lane closures for Ajo Way near I-19

Ajo Way, officially called Arizona 86, will be reduced to one lane in each direction from 9 p.m. to 5 a.m. each night until Friday, Aug. 2.

The work will last from 5 a.m. to 10 a.m., causing intermittent road closures of 15 minutes during construction.

Both lanes of northbound Interstate 19 near Pima Mine Road have been cleared after a rollover crash involving a semi-truck Monday, officials say.

Tucson will experience above-normal temperatures Monday before the monsoon storms kick back up.

A 4-year-old girl and four other people were bitten by a bobcat at a campground on Sunday, wildlife officials say.

Star opinion: Endorsements for the City of Tucson's 2019 democratic primary

An elderly man was found with apparent self-inflicted injuries at a home on Tucson's north side Monday afternoon, police say.

Construction workers use a crane to install a crosswalk light at the intersection of East Valencia and South Kolb roads. The road project cost an estimated $19 million and is expected to be completed this month.

A construction worker prepares electrical wiring for one of the traffic signals at the overhauled intersection at East Valencia and South Kolb roads.