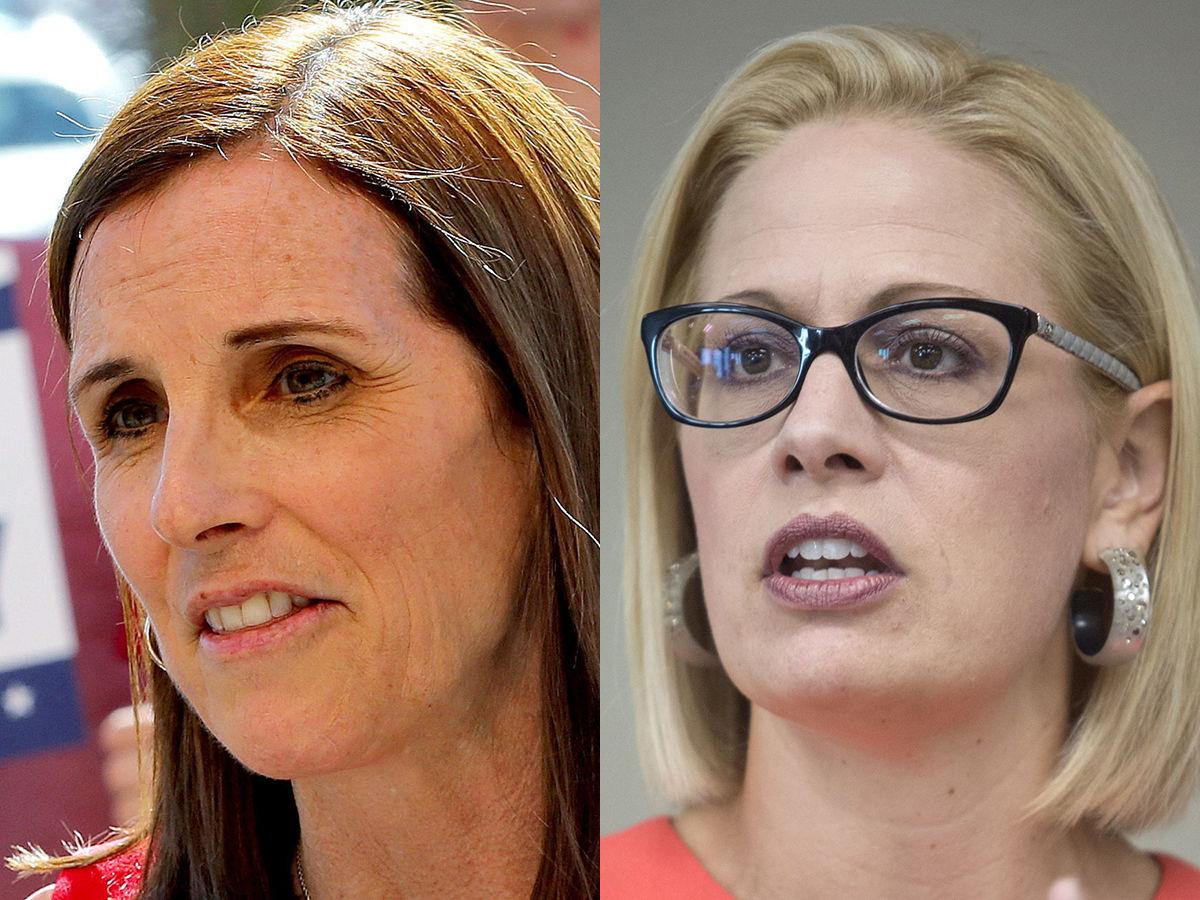 This may go down in Arizona politics as the year of the pink tutu.

Whether that’s a good thing for Martha McSally or for Kyrsten Sinema is unclear for now.

McSally set the tone of the current ad war for the open U.S. Senate seat with her first spot, which she put out before she had even won the GOP nomination in August, attacking Sinema as a tutu-wearing war protester. The outside groups supporting McSally have followed her lead on the attack, even using the same picture of Sinema at a 2003 anti-war protest in a pink tutu.

They have gone further, saying Sinema favored lower sentences for johns who use child prostitutes, and even attacking her as a —gasp! — former criminal defense attorney who represented people accused of crimes. One ad, from the National Republican Senatorial Committee, intones, “Her firm even represented a meth dealer who killed a young mom and dropped her body in a Dumpster.”

Sinema or her supporters have returned the fire, but not at quite the same rate. One ad by the Democratic Senatorial Campaign Committee called the Republican Tucson congresswoman a disingenuous, flip-flopping liar. Another ad, by Priorities USA Action, said McSally “wants to let insurance companies deny health care to people with pre-existing conditions.”

You would think that McSally, a former fighter pilot who often talks up her service, would be a favorite to win this “air war,” taking place on TV and the internet. But I suspect there is a public hankering for something more than these attacks. What, a curious Arizona voter might ask, is McSally or Sinema for?

Voters don’t expect a detailed policy prescription in a 30-second ad. It’s fair, though, to demand better than what we’ve been getting in the advertising that has dominated not just TV but also social-media and even online music feeds.

The reason for the onslaught is the stakes are high and the race, for a seat left open by the retiring Republican Jeff Flake, is close. The control of the Senate, now favoring Republicans by 51-49, could flip if Sinema wins and other elections fall the Democrats’ way.

Plus, it looks like a race that either candidate, both members of Congress, could win. In a NBC/Marist poll out Tuesday, Sinema held a 45 to 43 percent lead over McSally, with Green Party candidate Angela Green garnering 6 percent support.

Total of all these categories so far: Around $31 million.

McSally knew the stakes were high and the race would be close, of course, when she launched her general-election campaign before primary election day. In the Aug. 23 spot, McSally said, “While we were in harm’s way in uniform, Kyrsten Sinema was protesting us in a pink tutu and denigrating our service.”

Online fact-checker Politifact quickly looked into McSally’s ad and concluded her claim was “mostly false,” because Sinema did not denigrate the troops in her protests of the Iraq War. But then CNN showed that fliers for anti-war protests that Sinema organized portrayed U.S. soldiers as terrorists.

In any case, Sinema came back with an ad of her own, introducing a trio of veterans who support her and noting the military service of two of her brothers. (Worth remembering, of course, that Sinema was probably as right about the war as McSally was honorable to serve.)

The pattern of attacking ad by McSally, responding ad by Sinema has continued in the case of the legislative action in which Sinema allegedly supported shorter sentences for users of child prostitutes.

It was Defend Arizona, a Political Action Committee supporting McSally, that put out the ad making this claim. Several prominent Tucsonans have supported the PAC, which has reserved $4.9 million in air time for ads this fall.

“You always want to make sure that what you’re putting out there is factual, and that it is something that voters should use in their determination of who to vote for,” Defend Arizona consultant Barrett Marson, who is a former Arizona Daily Star colleague, told me.

Rodd McLeod, a Democratic campaign consultant, described what happened this way: “Sinema votes in committee for a Republican bill to increase the penalties for child prostitution, and they manage to make an ad about a couple of lines in the committee debate and ignore how they voted to create a misleading impression.”

Marson, the Republican consultant, defended the ad, saying, “She voted for a bill that was watered down.”

McLeod, who is helping coordinate some of the outside groups’ spending for Sinema and against McSally, said candidates can’t win in statewide races anymore without big outside support. And he suspects McSally’s attacks will backfire.

I hope that threat, a real possibility in my book, will make both campaigns and the outside groups feel pressure to do something different. The pink tutu was a cute little number, but it’s not working as everyday wear.

Largest amount of donations in its 133-year history; the previous record was $293.5 million in fiscal year 2015.

The two rivals for Arizona governorship attack each other over border, education, other issues.

Café Marcel creperie at 2281 N. Oracle Road is under new management, with an expanded menu that includes, among other things, liquor-infused c…

One of the drivers in a serious crash on Tucson's east side died three days after the incident last week, authorities said.

Sen. Jeff Flake says his family has received death threats since he asked the Senate Judiciary Committee to hear testimony from Christine Blas…

Tucson families, friends come together to remember loved ones lost

Jon Kyl purportedly serves us, the people of Arizona, again, and yet he has largely been hiding from the hurly-burly that McCain seemed to relish

Sinema is in a tight race for Senate against Tucson Rep. Martha McSally.

Near the end of their hour-long debate, McSally brought up a radio interview Sinema did in 2003 during her anti-war days