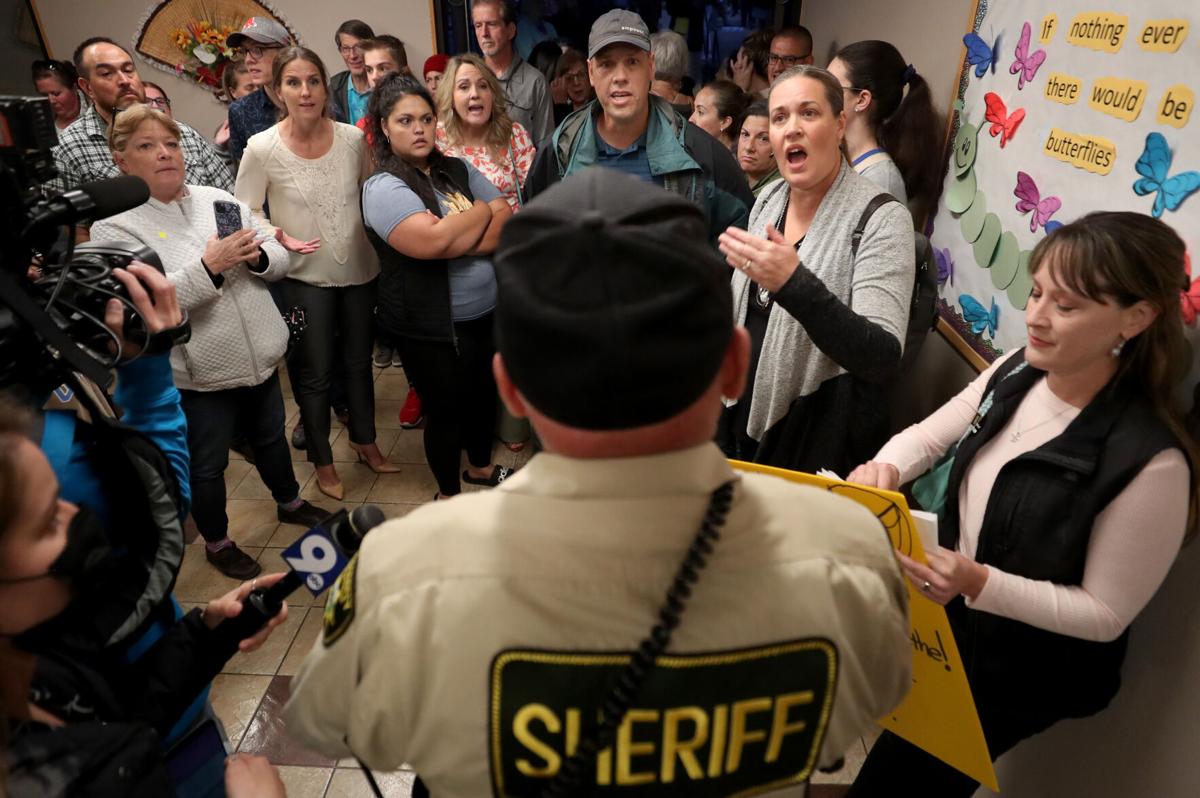 A crowd of several dozen confronted a Pima County sheriff's lieutenant in the lobby of the Vail Education Center after they had been asked several times to leave the facility in this April 27 file photo. The crowd held a pretend election after the Vail board canceled its meeting. 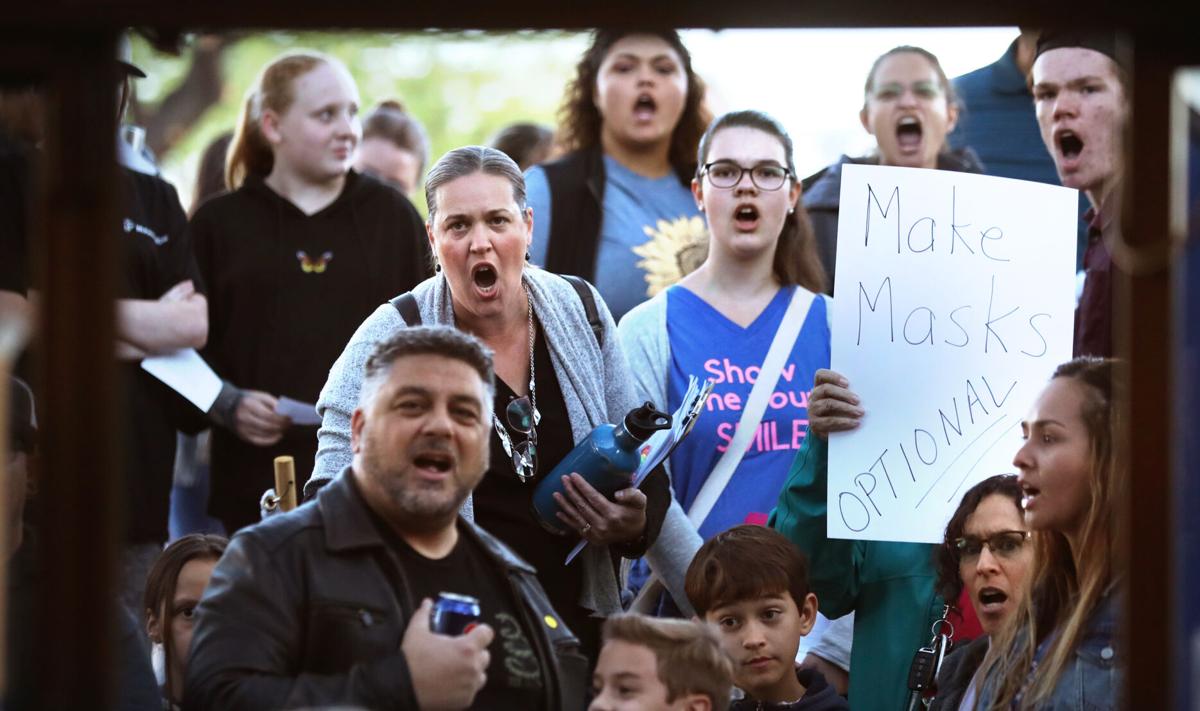 A crowd of a couple of hundred people yelled through the doors of the Vail Education Center after being kept out of the Vail School District governing board meeting on April 27. The meeting was canceled before it was officially started when most of the crowd refused to wear masks or accept limits on the number of people allowed into the building.

It looked for an evening like maybe a revolution was underway at the Vail School District.

On April 27, a crowd protesting mask mandates refused to wear face coverings as required to attend the board meeting and pushed past security. At that, the Vail school board canceled its meeting, and the protesters went about a ritual of selecting replacement board members from their own ranks.

Those replacements weren’t real, but an effort to recall board members took off afterward, feeding in part on the anger from that meeting. The recall effort raised the possibility that those protesting the board in late April might actually win seats on the board, not just in a pretend ritual.

They didn’t win, at least not yet.

The recall effort against board chair Jon Aitken and member Claudia Anderson officially failed on Friday. Recall leaders, who needed to collect 4,364 valid signatures, didn’t turn in any signatures by the deadline that day.

What that means, usually, is they didn’t collect anywhere close to the required number.

And what that means is that those people regularly confronting the Vail school board and other school boards across the state appear not to have broad support. They are likely a loud, small faction posing as “we the people.”

Showing up to school board meetings and angrily denouncing board members over mask mandates, vaccines, critical race theory and sex education has become a rite on America’s far right.

A candidate for county executive in Northampton County, Pennsylvania, made news this week when he advocated using force against school boards who vote for mask mandates.

“You go into school boards to remove them — that’s what you do,” Steve Lynch said at a political rally, his hands on a lectern printed with the words “We the People.”

“I’m going in with 20 strong men. I’m going to speak in front of the school board, and I’m going to give them an option — they can leave, or they can be removed.”

He didn’t know, it appears, that people have already tried that in Vail, and it failed, because it was not legal.

“There are groups who have decided to weaponize this fight over masks and over curriculum and instruction,” Chris Kotterman of the Arizona School Boards Association told me.

“We’re not in the business of stifling the politics of the moment. They have the right to express what they want to express, but they have to do it in a manner conducive to safety.”

Carrie Liebich, who formally started the Vail recall campaign, declined to talk to me, saying she doesn’t speak with reporters. However, I’ve been able to speak with three school board members and others connected to the recall and review related videos and statements.

I also requested comments from area residents on a Facebook forum for people in Vail and Rita Ranch, asking why the recall failed. The most common comments were along the lines of this response: “There was no reason to recall them.”

People also complained that recall supporters tried to gather signatures the first day of school and at after-school pick up, and that they were simply too far out in their arguments.

“I read their claims against the two they wanted to recall and felt their claims were full of emotion and no real evidence,” a resident said.

There were also practical impediments: 4,364 is simply a large number of signatures to gather, and respondents on the Facebook page also noted they hadn’t heard of the recall effort.

The failure of the effort doesn’t mean it has been painless to those targeted, Aitken and Anderson. Aitken has been accused, among other things, of causing three suicides in the Vail district last school year and of pushing critical race theory, something he said the district has neither taught nor discussed teaching.

“It was a cartoonish effort to create hostility and vitriol in the district about a topic that never existed in the first place,” he said.

“This has poisoned the well,” he added. “It made me question whether or not it’s worth participating in public service.”

He and Anderson suspect that the only reason they were targeted for recall is that they are both Democrats. The other three members are independents or Republicans.

In fact, Anderson almost seems to have been added on as an afterthought. The official statement explaining the grounds for recalling Aitken has specific individual allegations against him, but the one against Anderson contains boiler plate language and vague accusations like “She appears to lack the drive to fight for students and parental rights.”

“They were pretty vitriolic and not completely truthful, and I think people could see that,” Anderson said.

Chris King, a longtime local Republican activist who has been on the board less than a year, has often been on the other side of the dais, criticizing the Pima County Board of Supervisors.

Now recall supporters are looking to win influence the normal way — by running for the board. Bill Liebich, the husband of recall leader Carrie Liebich, is one of several recall supporters who have filed to run in next year’s Vail election.

Carrie Liebich explained in a pro-recall video what it was all about to her: “All we’ve ever wanted was to be heard. We wanted a voice.”

But of course, they had a voice all along. They have been heard, as have the other people confronting school boards around the state and country. And “we the people” are rejecting them.

Due to Covid-19, Splash and Cody, two therapy dogs, have not been able to visit with patients, so they made a special trip to see staff on Aug…

Watch now: Hours after the latest rain has ended, water still flows in the CDO wash

The Can͂ada del Oro wash is far from flooded, but water is moving under Magee Road and along the Loop near the overpass Tuesday, Aug. 31, 2021.

Father, two other men, went to Mesquite Elementary School to confront principal. Men carried zip ties and said in livestream they were prepared to make a citizen's arrest.

The groups trying to force a referendum on six bills passed by the Arizona Legislature this year, about tax cuts and election-law changes, are rounding into the final stretch of their signature-gathering efforts.

A crowd of several dozen confronted a Pima County sheriff's lieutenant in the lobby of the Vail Education Center after they had been asked several times to leave the facility in this April 27 file photo. The crowd held a pretend election after the Vail board canceled its meeting.

A crowd of a couple of hundred people yelled through the doors of the Vail Education Center after being kept out of the Vail School District governing board meeting on April 27. The meeting was canceled before it was officially started when most of the crowd refused to wear masks or accept limits on the number of people allowed into the building.