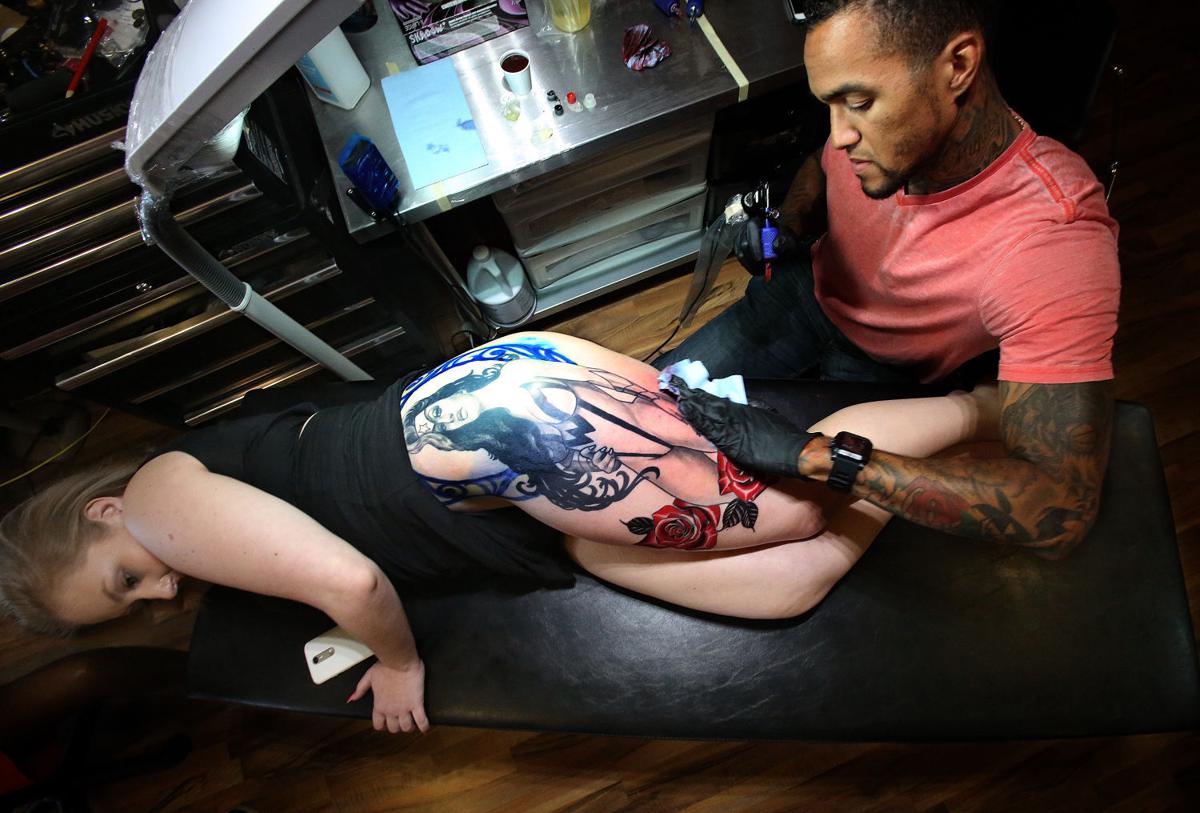 Tattoo artist Anthony Michaels works on the thigh and hip of Rachael Fleury to create an image of Wonder Woman at Metro Tattoo on East Speedway. Michaels recently won the title of Ink Master on the Spike show of the same name, beating out 15 other artists and winning $100,000. 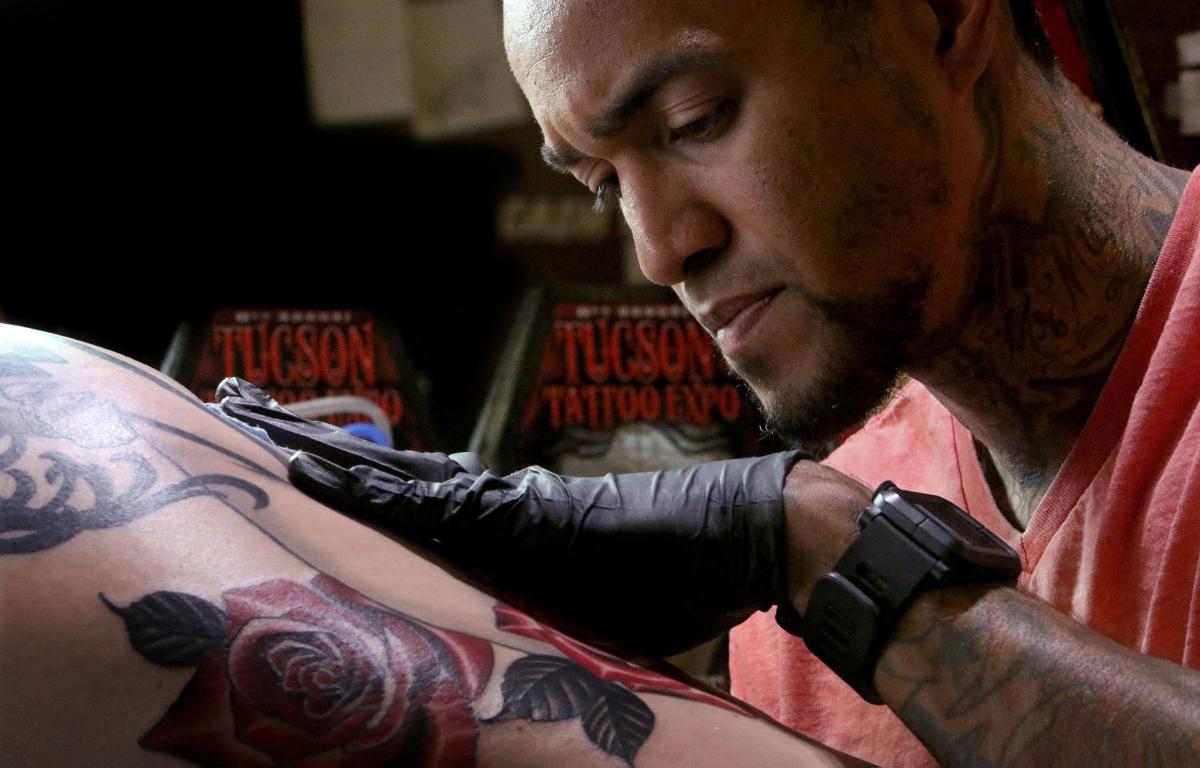 Anthony Michaels says he wants to “evoke emotion. I want to inspire people” with his art. 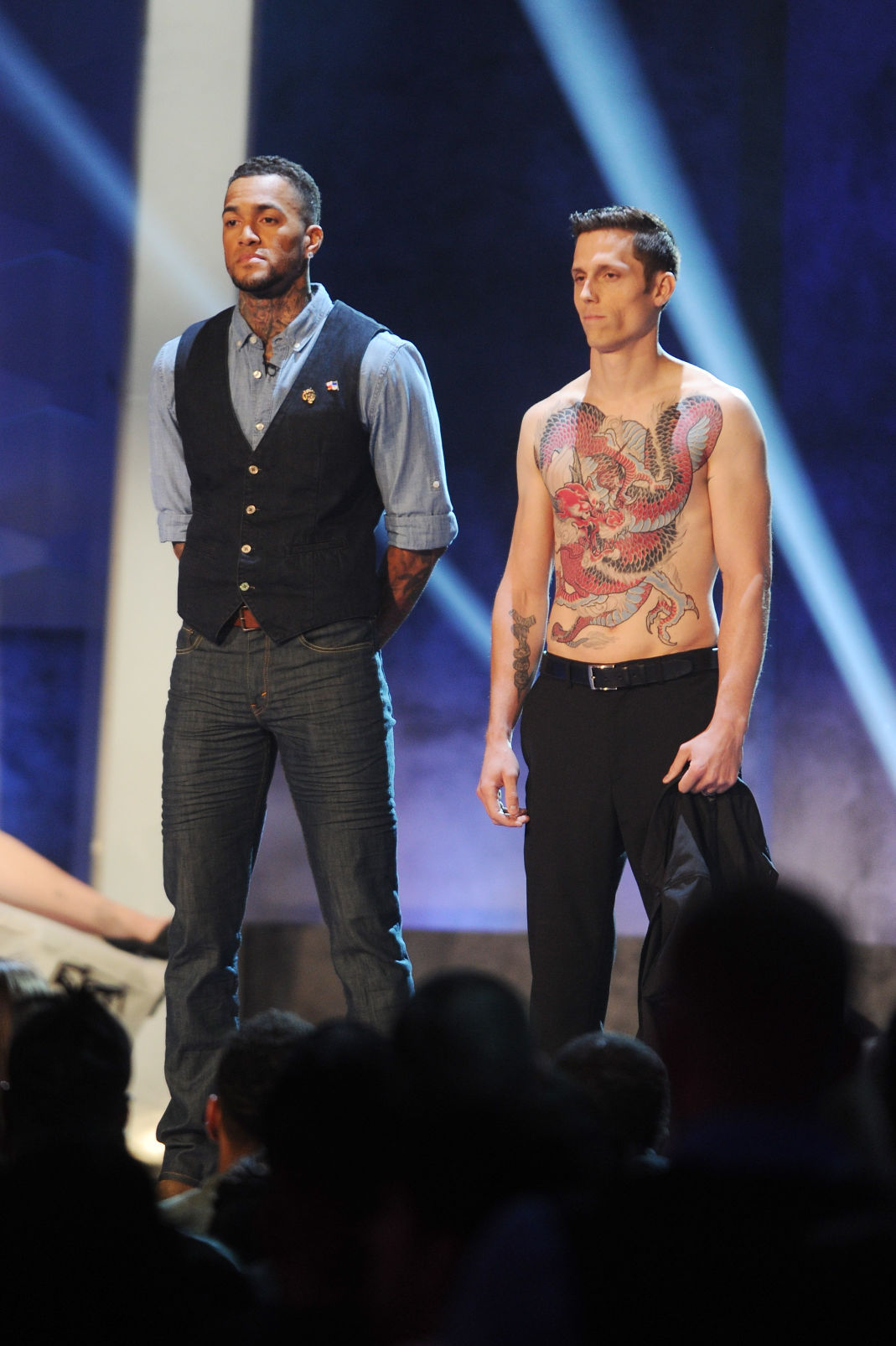 Tucson tattoo artist Anthony Michaels has a lot on his plate in the coming days.

He had more interviews, was finishing one large tattoo and was set to do another at Metro Tattoo, the East Speedway shop where he works. After that, he said late last month, he was going to be flown to the East Coast for more photo shoots and interviews for magazines.

He was an in-demand artist before, but after his recent win in a television tattoo competition, Michaels wakes up to 50 emails in the morning instead of 20. He is booked through next summer and is not taking new appointments, barring special circumstances.

“I’ve got my work cut out for me. I’ve been getting hit left and right. I don’t know what I’m going to do,” he said.

In late May, Michaels walked away with the title and a $100,000 prize in the season seven finale of the Spike program “Ink Master,” a reality show watched by an average of 1.8 million viewers in which tattoo artists square off in challenges that test their technical and creative abilities, according to Spike.

Michaels’ philosophy on his art is simple: “I want to evoke emotion. I want to inspire people.”

“I couldn’t have done it without the city’s support. There’s no way. They gave me another reason to fight outside of my family.”

Though the show reached out to him first, Michaels said the producers initially had doubts about how he would fit in on reality TV, which deals in situational tension and quick-fire snippets of human interest and conflict.

“I’m not going in there yelling and causing a scene. I was there to tattoo. That’s it,” Michaels said.

“They were like, ‘Yeah, he’s too mellow, we don’t know. We like his look and we like his work … but what if he gets booted off the first day?’”

But Michaels, and the producers, found a space for his soft-spoken demeanor, and the persona presented by the show is one confirmed by the artist himself and his colleagues. He became a fan favorite, offering an alternative to the egocentric, one-liner aggression for which the genre is known.

Viewers will know that Michaels was part of an alliance with other artists that put a narrative thread in the eliminate-or-be-eliminated structure. In spite of that, Michaels feels he was able to avoid taking part in a “bickering contest.”

He said staying true to who he is wasn’t easy, nor was avoiding all the “nonsense that was going on.”

“It was nerve-wracking. I wanted to come home every day.”

For the two months of filming, the show confiscated his cellphone, wallet and other belongings, he said. Contestants were told what to wear and when to wake up.

“Being on camera … having a camera in your face 24/7, that can really mess with you.”

He said his wife’s encouragement and thoughts of his mother, sister and kids gave him the push to keep going.

“It’s like, what are you made of? Can you keep your integrity being told what to do and how to live — and on top of that, doing what you love?

“I said yes, and then separated what was really going on and what I wanted to do. … I think that transferred on camera.”

Michaels insists there was little to no direction on the program. “There’s no cue cards. There’s no script. It’s real and it sucks.”

Instead, he said, producers ask contestants to be themselves, but amplified, and sometimes to “add fuel to the fire.” Still, “What we do is up to us.”

The artist said he has always been shy. As a student at Amphitheater High School, he kept to himself and focused on sports. The show presented a way for him to step out of his comfort zone and take another step toward his goals.

“I’ve always wanted to have an influence on people. It’s always been my dream even though I was shy. I’ve wanted to somehow be a leader, be someone of importance.”

Michaels wasn’t anonymous prior to his “Ink Master” fame.

He spent several years on the semi-professional basketball circuit, most recently in Toluca, Mexico, and is a regular participant in the Tucson Summer Pro League.

His wife, Kasey, runs a beauty guru YouTube channel with almost a million subscribers. He’s been building a name for himself as a tattoo artist over the last six years.

His popularity crescendoed the longer he survived on the show. Now he’s routinely approached on the street, boasts almost 20,000 Twitter followers and has TV producers promising they have plans for him. He isn’t necessarily opposed to a future in a bright spotlight, despite his discomfort on “Ink Master.”

If he does do more TV, he said, it will only be as long as it doesn’t get in the way of family, which is never absent from his discussion of his career.

Family issues brought him back to Tucson from Blinn College in Texas. Family commitments transitioned him from his basketball career. Now, the future of his kids is shaping his next steps.

Whatever the effects of the experience and newfound fame, Michaels said he keeps his priorities in plain view and feels he can continue to be himself.

“I don’t want millions and millions of dollars. I want my family taken care of, I want my customers happy and I want my tattoos to be as perfect as they can be.”

Al Hoeflinger, the owner of Metro Tattoo, echoed that.

“He’s a good dude. He was the same guy on TV that he is in real life. He’s not about drama. He’s a man. He takes care of his family, he takes care of business, and at the end of the day he hangs his hat up and starts it again tomorrow.”

Scientist loves climate history — and her tattoo proves it

Big-money fellowship will fend off the 'wheel of this anti-climate-science sentiment,' colleague says.

Librarians become new selves when not between shelves

Tattoo artist Anthony Michaels works on the thigh and hip of Rachael Fleury to create an image of Wonder Woman at Metro Tattoo on East Speedway. Michaels recently won the title of Ink Master on the Spike show of the same name, beating out 15 other artists and winning $100,000.

Anthony Michaels says he wants to “evoke emotion. I want to inspire people” with his art.