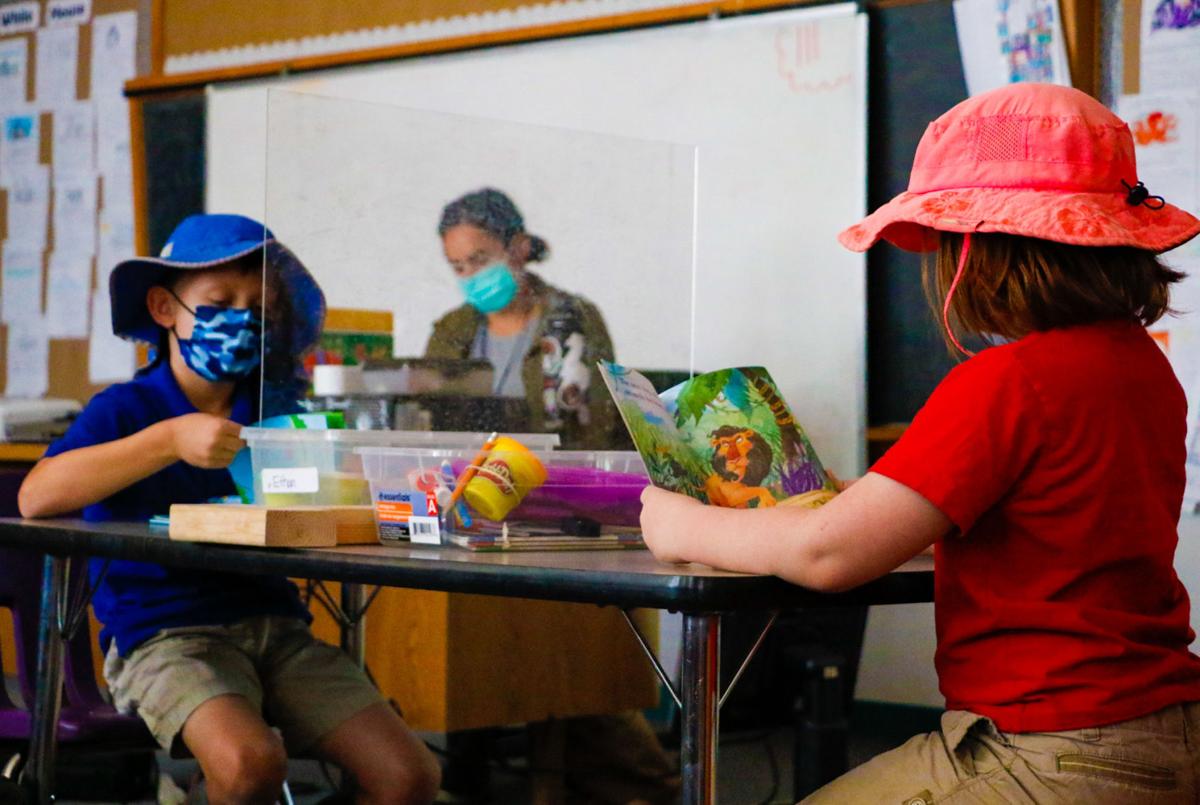 Students separated by plexiglass shields read at their seats in Laura Garcia’s first grade class at the International School of Tucson. The small private school has been open for full-time in-person learning since August. 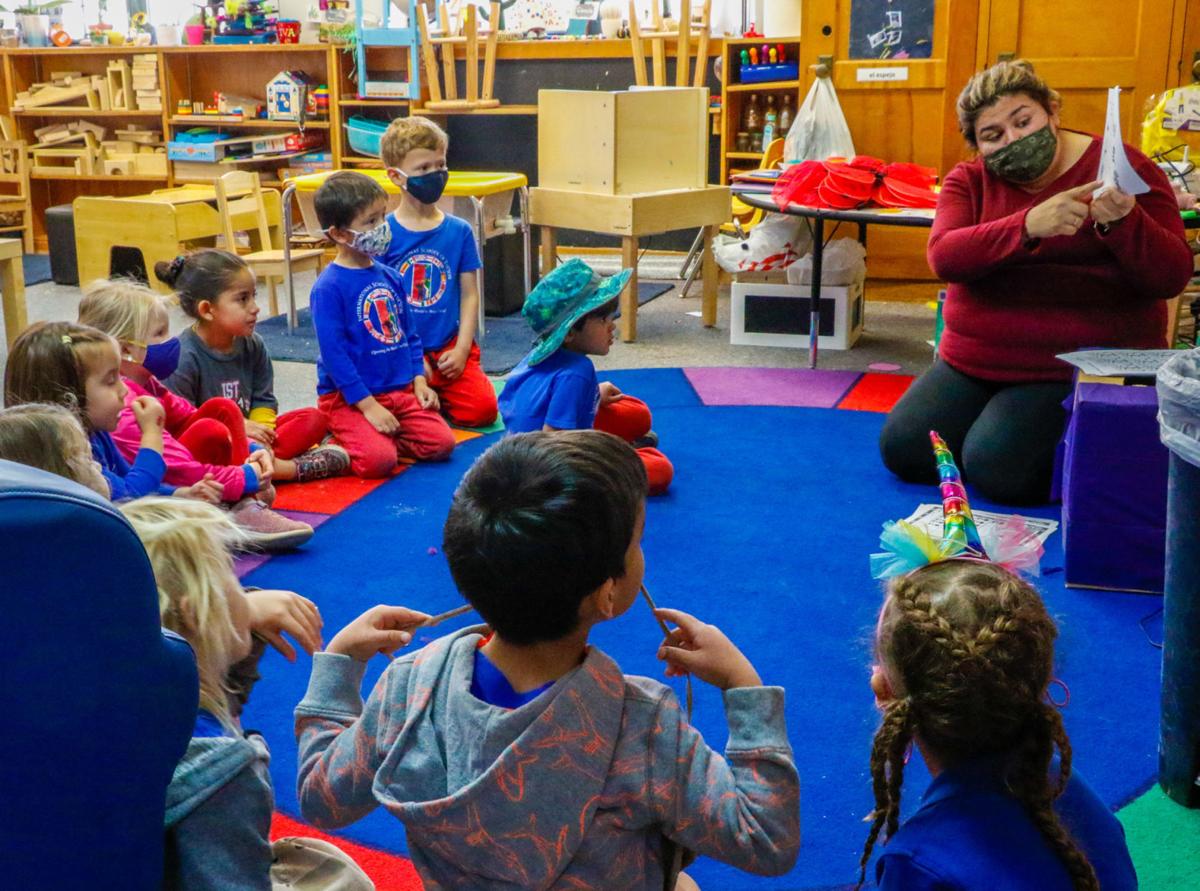 Enrollment has increased 10% this school year at the International School of Tucson, mostly in the younger grades, according to a school official. 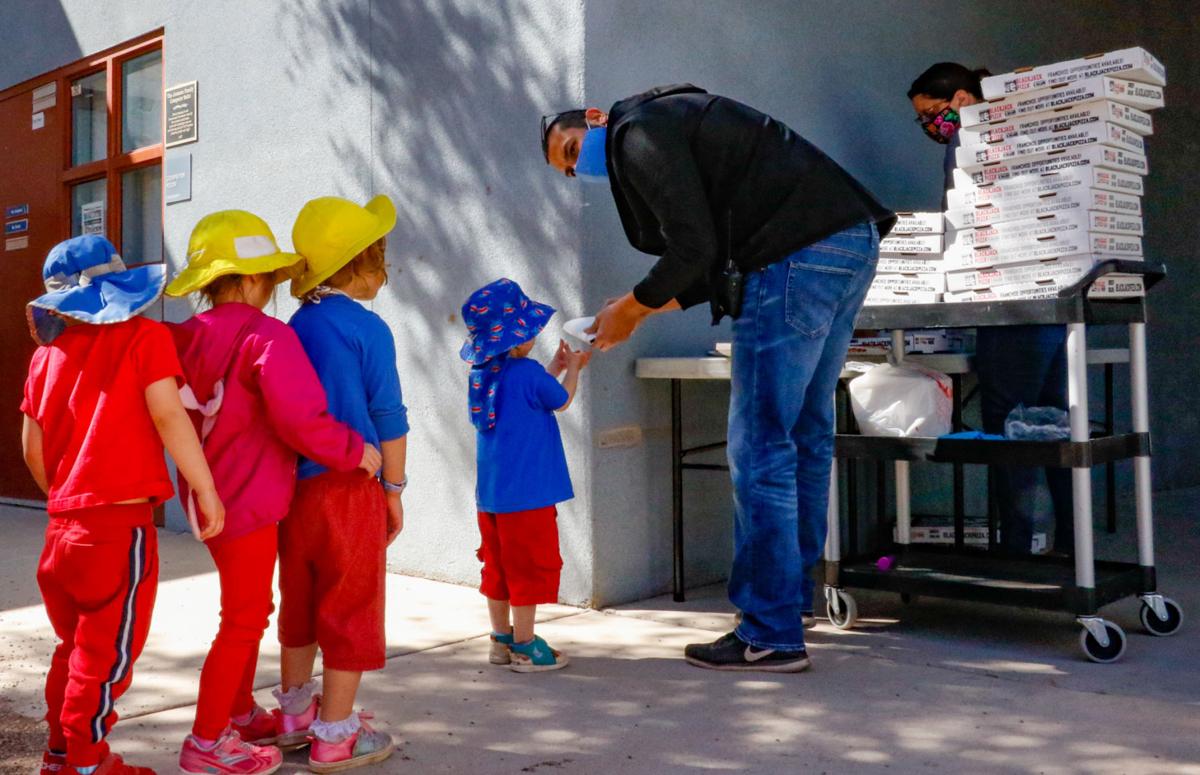 French teacher Abdel-Rahim Sakhr hands out pizza at lunchtime at the International School of Tucson.

When Denise Sullivan’s ninth grader started the school year doing remote learning in the Amphitheater School District, he struggled in front of a computer for six to seven hours a day until he complained of his eyes hurting.

“It was just a nightmare for us,” she said. “My son was extremely stressed out.”

Then Sullivan heard Green Fields, a former private school turned charter, was offering five full days of in-person classes. In January, they decided to give the school a try.

When she asked her son if he liked it, she got a resounding yes.

“There was absolutely zero hesitation,” she said.

Sullivan’s son is one of nearly 3,000 students that Pima County charter schools have gained. Another 4,600-plus children who were previously enrolled in Tucson public schools left public education altogether, according to data from the Arizona Department of Education.

A similar trend was seen statewide, with school districts losing about 55,800 students from last school year while charter schools saw an 18,500 increase.

Sullivan moved her younger son out of Amphitheater, too, opting to home-school him, and she says he’s thriving.

“I still have a full-time business. That’s had to suffer because of helping my kids get the education that they need,” she says.

There are 38,550 fewer children in the Arizona public school system — charters and district schools combined — than last school year. That drop is nearly twice as large as the only other statewide drop in the last five years.

“Families have just had to work, and they could not do the remote instruction,” he says. “We know that we’ve lost students to these charter schools and smaller schools that have really just not fully implemented CDC guidelines, and just said that they’re going to go for it, and they’re going to open anyway.”

Sullivan says her son’s classes include small “pods” of about seven students. However, the number of children in a classroom and how strictly mask-wearing and other COVID-19 safety measures are enforced varies widely across different charter and private schools.

Every Tucson-area school district saw an enrollment decline, with Amphitheater’s being the largest at about 12%. Most district leaders hope that as they begin to return to full-time in-person instruction, their students will return as well.

But Sullivan says her oldest child will be staying at Green Fields.

“He’s getting the education that he needs,” she said.

WAITING FOR A “COVID-LIte” SCHOOL YEAR

Despite the exodus to charter schools, the largest portion of the enrollment decline is from parents not enrolling their children in kindergarten and preschool. Together these grades account for nearly 42% of this year’s enrollment loss statewide.

Across Arizona, there are 8,646 fewer children in kindergarten, a 10.6% decline from the previous year. Similar to the older grades, kindergarten enrollment in charter schools increased, by 6%, while it dropped in district schools by more than 15%.

There are 7,373 fewer students in district-run preschools across the state, a nearly 34% decline.

Trujillo says TUSD lost a lot of students at the kindergarten level because it’s not mandatory like school attendance is in first through 12th grades .

“We’ve seen a lot of parents just opting to sit their kindergarten student out for the year to be able to start fresh next year, hopefully with a COVID-free or COVID-lite school year,” he said.

Tucson Unified’s kindergarten enrollment this year saw a 19% decline, and preschool declined by 40%.

CHILDREN UNACCOUNTED FOR in school system

There are other reasons the enrollment has dropped, including parents moving their children to private schools and home-school, neither of which are tracked at the state level. Some families moved out of state, and some students are just completely unaccounted for in the school system.

Amphitheater, which saw an enrollment loss of about 1,600 students, had about 400 students move to a charter, private school, other district or home-school, and about 700 students the district can’t locate because the parents provided no contact information and no schools requested the student records.

Tucson’s two largest school districts, Tucson Unified and Sunnyside, don’t have districtwide numbers on how many students are unaccounted for.

This is a difficult subgroup of the student body to track while everything is remote, Trujillo says, but once TUSD schools reopen later this month, the district is going to be in a better spot to figure out which students are missing and try to reengage them.

“Some of these students have just left the state; other students are just sitting it out and just not coming into school,” he said. “This is a very, very difficult group to engage with. I can’t tell you that we have any definitive case-by-case situations that we can say are predominant destinations for where these kids are at. We just don’t know, and we’re in a similar position as other school districts.”

Heidi Crosby was raised in a family that advocated for public schools. A product of Amphitheater schools, she never thought she’d take her five children out of the school district.

“We were loyalists to the system, to our particular district, and we love their particular schools — until this year,” Crosby says.

Four of her five children began the school year doing remote learning, with one doing home-school because of her specific needs. Crosby says despite the teachers best efforts, “it was just a terrible experience,” especially for her two elementary school-aged children.

The lack of connection, not knowing when schools would reopen and staying on the computer sometimes until 9 p.m. were all reasons Crosby decided to begin home-schooling her kids.

“I was blown away at how demanding and time intensive keeping up with the remote learning was for not only my kids but also me,” she says. “It got to a point where it felt unreasonable. … I realized that I was getting zero done outside of schooling my children. If their education was going to demand my full-time attention, I might as well be home-schooling them.”

Now home-schooling four of her children, only her high-schooler stayed in the district, switching to limited in-person school and back again to remote as the school district opened and closed according to health department guidance.

Crosby is surprised how much she and her children are liking home-schooling, but she still thinks highly of Amphitheater schools. She’s yet to decide whether to send them back to public school next year.

Jonathon Brindley moved his kindergartner from Marana Unified’s Dove Mountain K-8 in November to a private school, but when Marana schools go back to full-time in-person learning, Dove Mountain is still his first choice.

“It felt like when we had to tell our teacher we were leaving, that we were going through a breakup,” Brindley says. “We’re there with them every day, listening to what they’re doing, and it just felt really odd having to leave that, but knowing that we needed to do it for our kid.”

Before settling on St. Elizabeth Ann Seton School, Brindley looked at Leman Academy and Legacy Traditional, two charter schools offering full-time in-person learning since August, but they both had long waitlists for kindergarten. He says there was also a waitlist at Casas Christian School, and Pusch Ridge Christian Academy didn’t even get back to him — two private schools offering in-person classes.

And while data on private school enrollment isn’t collected at the state or local level, anecdotally, that enrollment seems to have increased as well.

Kevin Brown, the head of the International School of Tucson, a small private school that’s been open for full-time in-person learning since August, says its enrollment has increased 10% this school year, mostly in the younger grades, and it already has a 24% increase for next school year.

He says parents are coming to the school for the in-person learning and also because of the COVID-19 safety measures the school has in place.

“People need to get to work. They need to pay their bills, and so they’ve been looking for places they can take their kids,” he says.

The school’s tuition is between $8,000 to $10,000 a year, but nearly 60% of families are receiving some sort of financial assistance, Brown says.

Still, switching to charters and private schools is not accessible for many low-income students due to the cost of the latter or a lack of transportation.

Additionally, minority students and those from low-income families are more likely to live in multigenerational households, with grandparents or adults who have health conditions that put them at higher risk for the serious effects of COVID-19, and so are less likely to opt for in-person learning while the pandemic rages on.

Working part time and in graduate school with a husband who works full time, Proffitt didn’t have the time she needed to get her younger children through remote learning, especially her kindergartner.

But she loves her neighborhood Marana schools and plans to go back next year if they’re fully open.

She says families left in droves, and she knows many of them won’t come back.

Children are spending more time than ever staring at digital screens. To help ease children’s eye strain, parents can follow these steps.

How one Vail middle school teacher manages with the new normal of braving a pandemic everyday to simultaneously teach in-person and remote students.

After re-evaluating whether school resources officers should remain on campuses, Tucson Unified adopts recommendations to improve the program.

As the effort to vaccinate Tucson educators progresses, Pima County pulls back on telling schools whether to offer in-person or remote learning.

The money can be used for structured recovery efforts for students during and outside of the traditional school schedule.

Students are dealing with more death than normal as Tucson's largest school district loses four employees in one week due to the coronavirus.

Across the state and in Pima County, public schools wait to see if state lawmakers will fully fund distance learning with dollars already allocated for public education.

Mari Katherine Scruggs, a teacher at Rincon Vista Middle School, creates the best-possible learning experience for her students as she navigat…

Students at Flowing Wells High School are getting their second, or third, chance to get a photo in this year's yearbook. Photography and film …

After spending millions on COVID-19 safety measures and technology, TUSD opens classrooms to about 20,000 students across Tucson.

Students separated by plexiglass shields read at their seats in Laura Garcia’s first grade class at the International School of Tucson. The small private school has been open for full-time in-person learning since August.

Enrollment has increased 10% this school year at the International School of Tucson, mostly in the younger grades, according to a school official.

French teacher Abdel-Rahim Sakhr hands out pizza at lunchtime at the International School of Tucson.