A great blue heron undergoes emergency surgery for a broken wing and a gunshot wound, while four orphaned javelinas wait to be bottle-fed in a room down the hall.

Welcome to a typical Tuesday at the Tucson Wildlife Center.

The licensed animal rehabilitation facility near the eastern end of Speedway just wrapped up its busiest year ever, with more than 5,270 critters treated in 2020.

Lately, they’ve had to treat all those creatures in the midst of a pandemic.

Since March, the center has been closely monitoring its team of about 120 volunteers and 20 paid employees for signs of illness or exposure, Bates said.

They’ve also had to reconfigure their operation to keep workers separated as much as possible and accommodate “curbside” animal drop-offs.

The precautions have used up valuable resources and time, she said, but they seemed to be working — right up until mid-December, when two people at the center tested positive for coronavirus.

The news sent Bates and company scrambling to isolate any workers who may have been exposed, get key staff members tested and make contingency plans to care for their animals in the event of a larger outbreak.

“We’re trying to do our own contact tracing,” Bates said.

If things get really bad, they might have to send some animals home with staff members to be cared for off site for a little while.

For now, they’ve cut down to a skeleton crew. But they can’t shut down completely and wait out the virus, not while they have birds recovering from surgery and those javelina babies needing to be fed every six hours or so.

The center also serves as the permanent home for about 10 animals that can’t be returned to the wild for one reason or another.

“It’s an essential business in terms of saving the lives of animals,” Bates said.

Of course, not every animal can be saved. “We get the worst of the worst,” she said. “We can’t fix a fractured spine.”

Of the animals they can treat, though, roughly 80% recover enough to be released, Bates said. “With every animal, that’s our goal: to get them back into the wild.”

Depending on the extent of the injury, that process can take as little as a couple of days or as long as three months.

And orphaned baby animals require even more time — as much as eight months in some cases, depending on how little they are and what time of year is best to turn them loose.

It can be tricky, even dangerous work.

“They’re all wild, and they’re scared of us,” Bates explained. “The bigger the animal, the more difficult it is to handle them, treat them and find a suitable release site.”

A busy time for those who are left

The wounded great blue heron was discovered near Orange Grove Road and Camino de la Tierra and brought to the center on Dec. 21.

By the next day, it was being stitched up in the ICU, an oxygen tube taped to its beak, but the rangy, 4-foot-tall bird was too far gone to save.

Staff members rarely have much time to mourn. Also at the center on this particular Tuesday were more than 80 other wild animals ranging in size from hummingbirds to full-grown coyotes.

Bates isn’t exactly sure why they’ve been so busy in recent years. It could be the result of drought, disrupted migration routes, the increasing impact of humans, or all of the above.

“I don’t know if it’s more people moving to Tucson, or more people finding animals during COVID,” she said. “There’s still a lot of animals being hit by cars, so it’d be nice if more people were staying home.”

Bates said collisions with cars account for more than half of the injured animals they see.

The wildlife center is probably treating more animals than ever before because there just aren’t as many options these days, said Arizona Game and Fish Department spokesman Mark Hart.

Of the 17 wildlife rehabilitation facilities licensed by Game and Fish statewide, only two can be found south of the Phoenix metropolitan area. Hart said there used to be three in Pima County, but one closed down for good after a fire.

The record volume and the pandemic have also put a strain on the center’s supply chain, which relies heavily on donations from the public.

“The community has been very generous, but it is a hard time,” Bates said. “It takes a lot to run a wildlife hospital. It’s getting tougher by the day.”

One donated item that’s in especially short supply is land.

Bates said the center is constantly looking for safe and welcoming places to release some of the animals in their care.

They generally try to return adult animals to the places where they were first found, but orphaned babies tend to need new territories where they can establish themselves.

For that, the center depends on willing private-property owners with sizable tracts of undisturbed land, preferably in remote areas with available water.

Places like that are increasingly hard to find, Bates said.

“People are disrupting the environment. There’s people everywhere, on all the streams and ponds,” she said. “People love the same places animals do.”

Center’s founder was raised on rescues

Bates founded the Tucson Wildlife Center with her husband, Peter Lininger, in 1998, as a second act after a career in hydroponic agriculture. “I retired early and wasn’t done yet,” Bates said, so she decided to return to her roots.

She was born and raised in Tucson, and she helped rescue her first wild animal here when she was just a little girl.

She said every neighborhood seems to have that one house where people take wild critters when they find them, “and that was my family.” She remembers javelinas, raccoons and foxes among her earliest patients.

Decades later, when she set out to start her own wildlife rescue, other local rehabilitators encouraged her to specialize in larger mammals, a seriously underserved area at the time.

Early on, the operation consisted of Bates, Lininger and a handful of volunteers working out of a hastily built surgery site with a few enclosures outside.

Bates doesn’t recall the first animal they took in, but it might have been a raccoon she nicknamed Mapache.

The nonprofit center has grown substantially since then.

The center also added a new administrative building, thanks to two of the largest individual donations in the center’s history — one from Sam Goldman and the other from Kate Willock.

Bates thought those facilities would last them for a while. Now she’s not so sure.

“We’re pretty much at capacity for the land we have now,” she said, as the center’s busiest year yet comes to a close. “I’m just hoping to God we don’t have to build more.”

Make sure you turn your volume on! Take a look at this clip of prairie dogs munching on corn at the Arizona-Sonora Desert Museum. (Video court…

Since the Bighorn Fire started one month ago, the Tucson Wildlife Center has only treated one animal injured by the blaze. But the center's director worries, saying the hard truth is that wildfires kill wildlife.

The Mouflon sheep was taken from a rural neighborhood west of Sahuarita to the R Lazy J Wildlife Ranch in Eagar.

Javelina shot in face with arrow in Marana; $1,500 reward offered for information 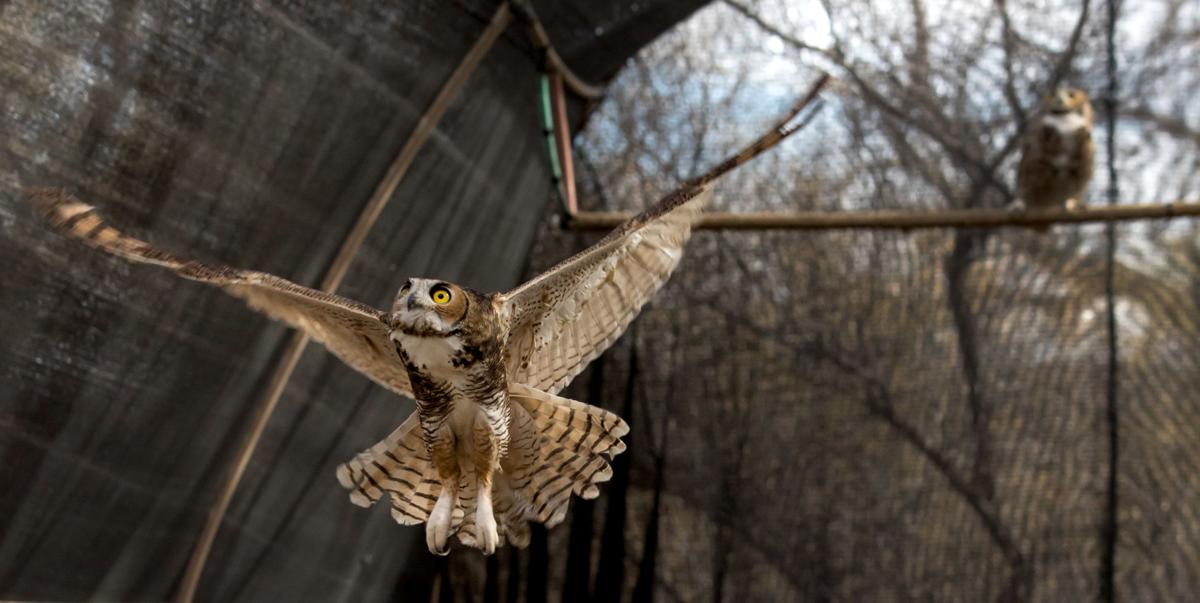 A great horned owl takes flight inside a bird run at the Tucson Wildlife Center. Two people at the center tested positive for the coronavirus in mid-December, setting off a scramble to isolate any workers who may have been exposed and get key staff members tested. 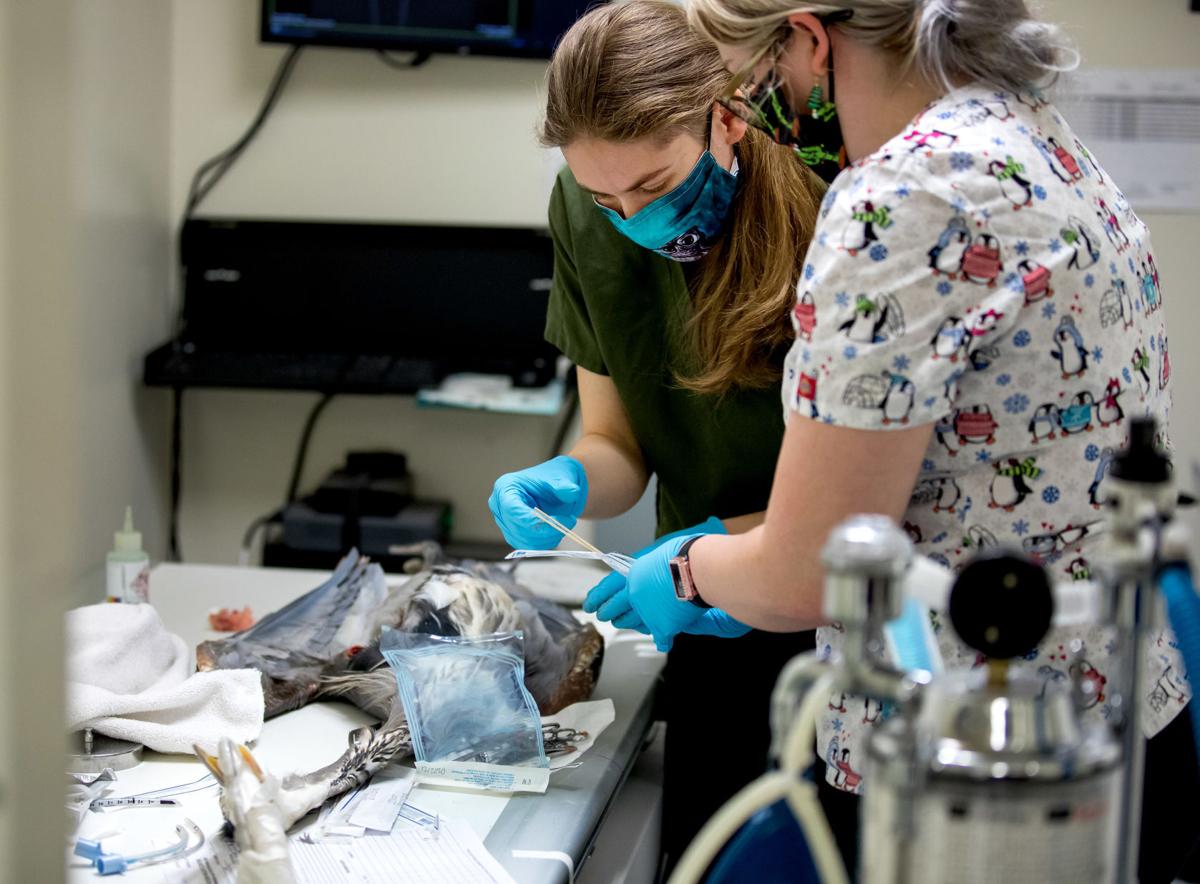 A veterinarian works on getting a pellet out of the wing of a great blue heron at the Tucson Wildlife Center, near the eastern end of Speedway. The center treated over 5,000 animals in 2020. 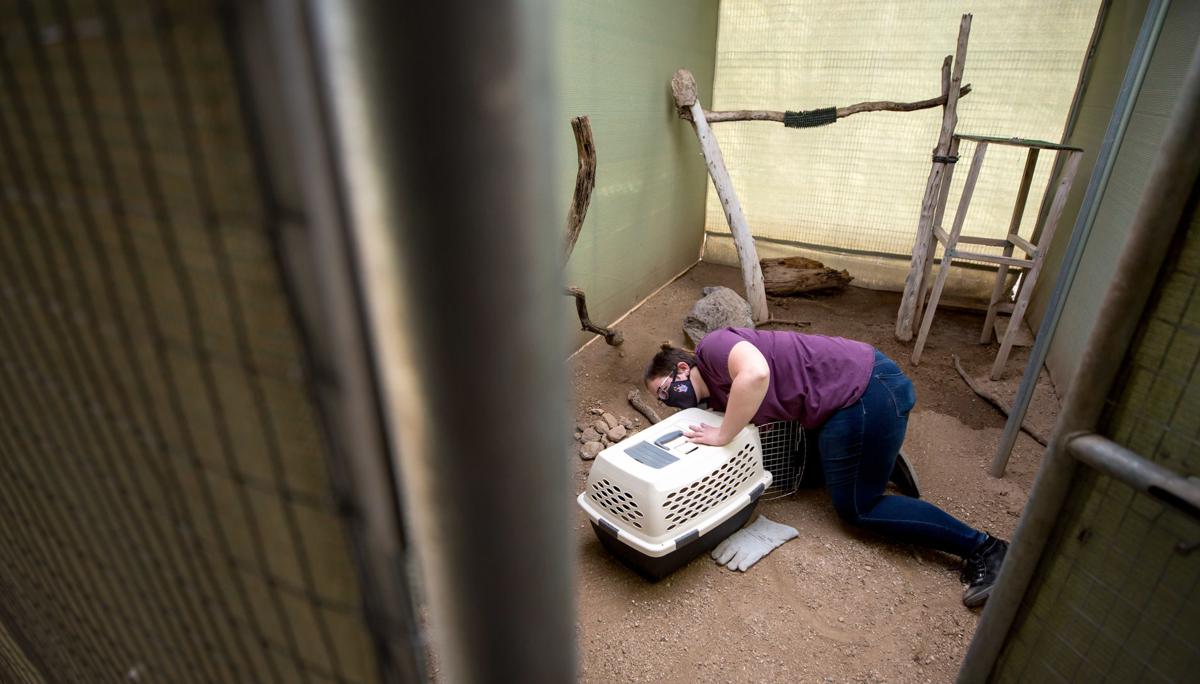 Maddie Raine, shift leader volunteer, tries to take out an American kestrel after it was dropped off at Tucson Wildlife Center, 13275 E. Speedway, in Tucson, Ariz. on Dec. 22, 2020. 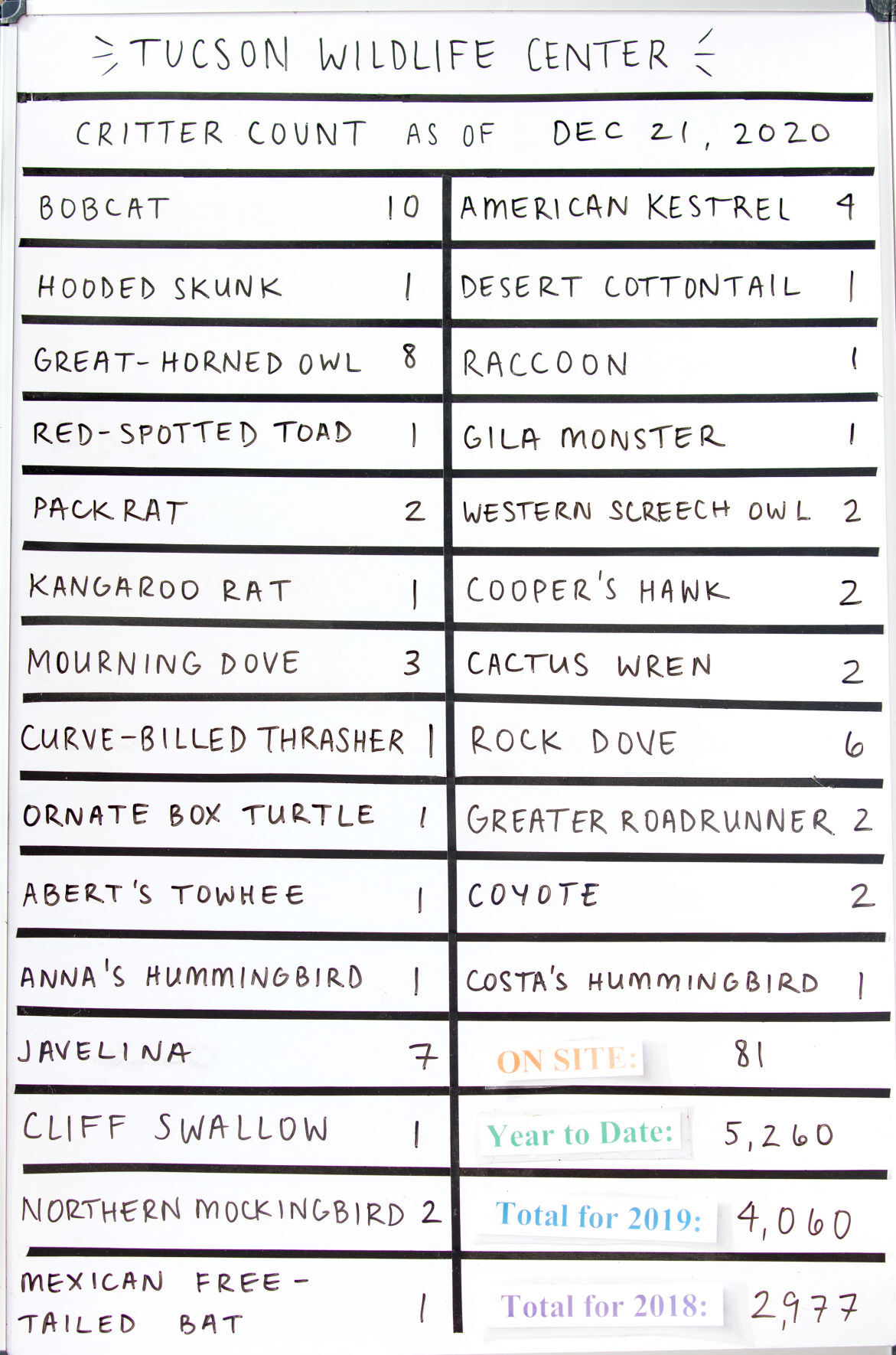 A board outside of the Tucson Wildlife Center informs the public about the critter count at the center, 13275 E. Speedway, in Tucson, Ariz. on Dec. 22, 2020. 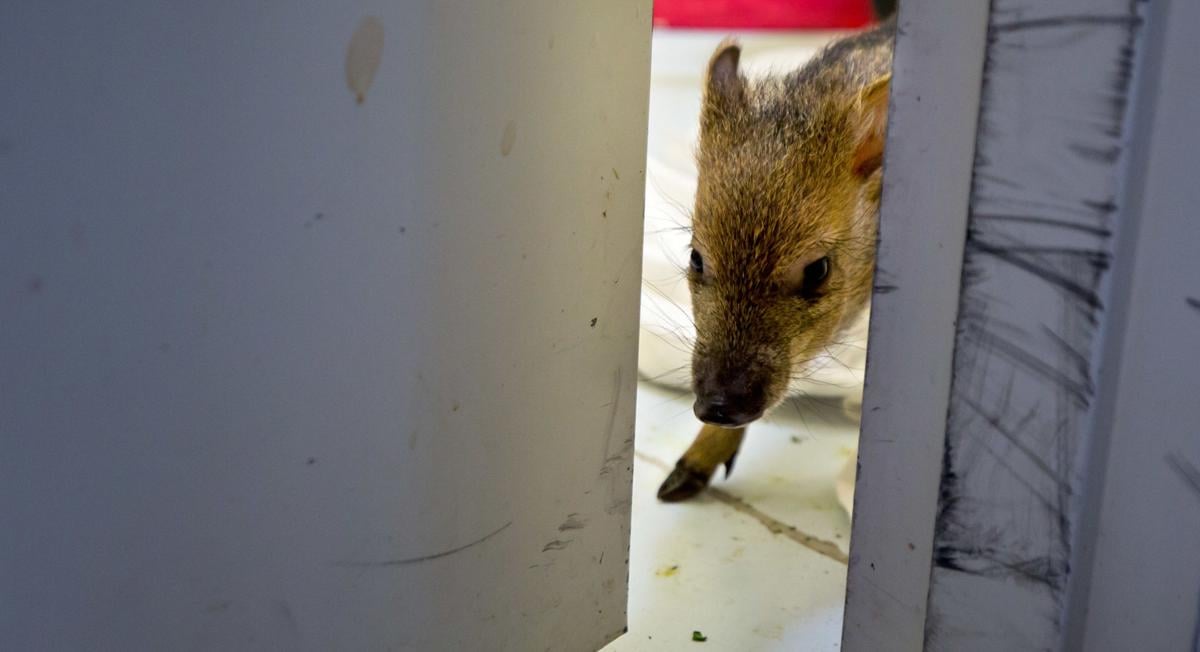 A curious baby javelina peeks through a crack in the door at the Tucson Wildlife Center. Most of the injured animals at the center have been hit by cars.