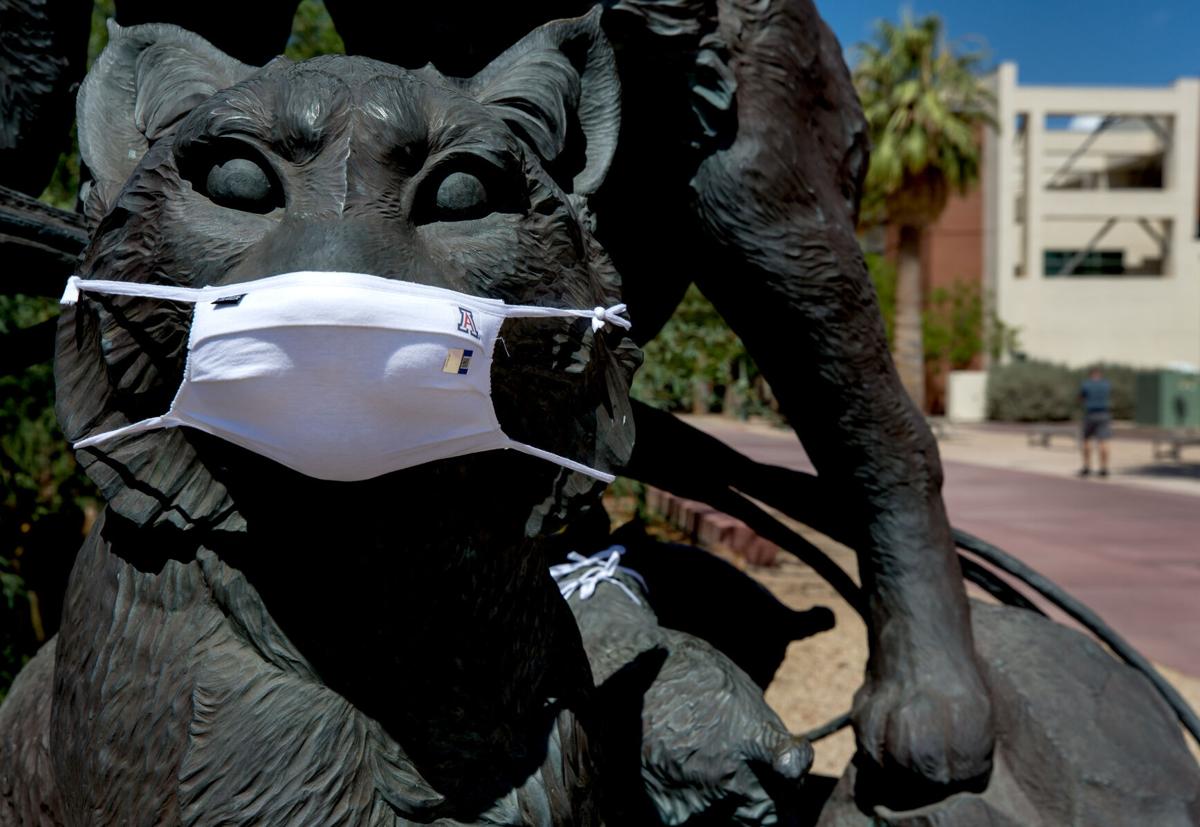 All three Arizona universities said Wednesday they are going to require face masks on campus in certain situations, setting up a likely legal challenge with the state over new state legislation apparently designed to preclude them from doing that. 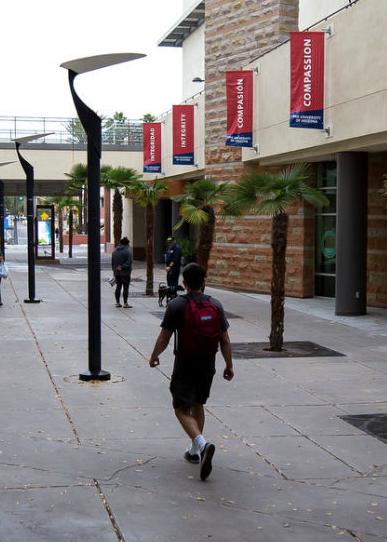 Students return to campus at the University of Arizona on Aug. 23. School leaders have said they are recommending mask wearing on campus but cannot mandate it because of state law.

PHOENIX — All three Arizona universities said Wednesday they are going to require face masks on campus in certain situations, regardless of new state legislation apparently designed to preclude them from doing that.

And more than half the Republican state legislators are asking Gov. Doug Ducey to withhold funds from schools who they say are violating a different ban on mask mandates and take the errant districts to court.

The new policy first announced by Arizona State University mandates the use of face coverings in classrooms, teaching or research labs as well as "close-quarter environments where physical distancing may not be possible." That specifically includes meeting rooms, workshop, design or production studios "and other indoor settings where social distancing is not possible."

Northern Arizona University followed with its own mask plan. President José Luiz Cruz Rivera said Wednesday the school is going from a "mask-friendly" campus to a "mask-smart campus."

The policy requires anyone on campus to wear face coverings in certain settings, "including all classrooms and teaching or research labs." And, like ASU, it also says masks must be worn in any other "indoor and outdoor settings where physical distancing may not be possible."

Cruz Rivera said the school is encouraging students to get vaccinated. But he said that's clearly not enough.

"Another thing that has become clearer through this discussion is that our next line of defense, regardless of whether or not we're vaccinated, is to wear face coverings," Cruz Rivera said.

"Based on the current health conditions and aligned with CDC guidance as well as our commitment to deliver in-person learning at the University of Arizona, we will require face masks be worn in all indoor spaces where it is not possible to adequately and continuously maintain social distance," Robbins said in the prepared statement.

He went on to say more details about the UA plan would be coming soon.

The moves come less than two months after lawmakers approved — and Gov. Doug Ducey signed — legislation saying that universities and community colleges cannot require that students be vaccinated against COVID-19 or show proof of such immunization. It also says that these schools cannot place any conditions on attendance or participation in classes or academic activities, including the use of masks, if someone chooses not to be vaccinated.

That, in turn, followed Ducey's June 15 executive order which has virtually identical language.

But ASU Vice President Jay Thorne said he does not believe the new policy violates either. The key, he told Capitol Media Services, is that it does not discriminate.

"Our requirements apply to everyone on campus (students, faculty, staff, and visitors) and regardless of their vaccination status," he said. "They do not conflict with the order or the legislation."

That also is the position at NAU, where spokeswoman Kimberly Ann Ott said the school believes its policy complies with state regulations "because it does not differentiate between vaccinated and unvaccinated students."

Ducey, for his part, appears to be seeking to avoid a confrontation with the schools over the policy changes.

"The law we signed is clear," said gubernatorial press aide C.J. Karamargin when asked about the decisions by the three universities.

"Gov. Ducey is not supportive of mandates or virtue signaling," he continued. "Rather than creating new mandates, the focus should be on vaccinations," saying they are "widely available and proven effective."

But Karamargin repeatedly declined to answer direct questions about whether his boss believes that the actions by the universities violate either his executive order or the new law — and whether he would take action against any of them.

The new university policies come as more than half the Republican state legislators are pushing Ducey to go after public and charter schools that they say are violating a separate law, approved at the same time, that more directly prohibits school boards from requiring the use of face coverings by students or staff during school hours and on school property.

Rep. Jake Hoffman, R-Queen Creek, who crafted the demand, wants the governor to withhold any federal funding under his control from any school district that is not complying with the law.

Hoffman also wants Ducey to authorize vouchers "for all students trapped within any school district that is non-compliant with state law," giving them tax dollars to attend private or parochial schools. And he said the governor should sue any district breaking the law.

The move comes as an increasing number of districts have chosen to require students and staff to wear masks on campus.

Don't look for any immediate action by Ducey on the request.

"We haven't reviewed it yet," Karamargin said of the bid by the 26 GOP lawmakers out of the 47 at the Capitol. But he suggested that the governor has no intention of making an issue of it, saying Ducey is "pro-parental decision on masks."

"Parents should decide what's best for their kids," Karamargin said. "And those are the kind of policies he will be supporting."

But the legal question remains as to whether they are breaking the law, at least right now.

But both GOP lawmakers and Ducey point to a clause saying that the ban on mask mandates is retroactive to July 1. And that, they claim, makes it enforceable despite the fact the underlying law — and that retroactivity clause — will not legally exist until Sept. 29.

Hoffman did not immediately respond to questions about the current effectiveness of the anti-mask provision. But Ducey, through Karamargin, has insisted that it is enforceable because that is the "legislative intent."

That, however, remains to be seen.

On Friday, Maricopa County Superior Court Judge Randall Warner will hear arguments by a teacher in the Phoenix Union High School District challenging the decision of its governing board to require the use of mask on campus. Attorney Alexander Kolodin, who represents Douglas Hester, is arguing that, Sept. 29 effective date regardless, the law is in effect and enforceable.

But Mary O'Grady, attorney for the district, said there's no basis for Warner to block the policy.

"The law is not the law right now," she told Warner.

That still leaves the separate question of whether the law will be enforceable even after Sept. 29. There are legal arguments that the legislature exceeded its authority as well as questions about whether lawmakers could put that anti-mask mandate into a 231-page bill containing various unrelated provisions.

University of Arizona students are returning to the Tucson campus and filling up dorms just in time for the fall semester, which begins Monday…

After state bans school vaccine and mask mandates, University of Arizona urges both

As COVID-19 cases surge in Pima County, UA President Robert Robbins is pleading with students and staff to get vaccinated ahead of the fall semester.

Kids in eye of 'perfect storm' of Tucson's COVID-19 spread

The number of new COVID-19 cases in Pima County children ages 16 and younger has been growing since July 1.

OPINION: "While TUSD serves as an example of  moral fortitude, clear and quick messaging, and efficient mobilization by administrators, my district, Catalina Foothills Unified, exhibits none of these virtues," writes Tucson mom Yvonne So.

OPINION: "The UA, faculty and administration as a whole need the discretionary ability to employ proven tools and measures, to decide the best mode to safely operate this vital institution," writes Dr. Marvin J. Slepian and other UA professors.

Schools join the three state universities to mandate masks for everyone indoors.

For Star subscribers: There have been 489 cases and 25 outbreaks in Pima County schools, since June 20.

U.S. Education Secretary tells Arizona governor his offer to give federal relief funds only to schools with no mask mandates may violate the law.

For Star subscribers: Starting Monday, more than 40,000 students will be moving through campus lecture halls, dormitories and neighborhood bars in a capacity not seen since the pandemic sent everyone home in March 2020.

All three Arizona universities said Wednesday they are going to require face masks on campus in certain situations, setting up a likely legal challenge with the state over new state legislation apparently designed to preclude them from doing that.

Students return to campus at the University of Arizona on Aug. 23. School leaders have said they are recommending mask wearing on campus but cannot mandate it because of state law.