Have you noticed a patchy beard of buds on some of the saguaros in your neighborhood?

Cactus experts are tracking an unprecedented outbreak of “side blooms” on saguaros across Southern Arizona and beyond.

Typically, the giant cacti sprout flowers only around the tips of their arms and trunks, but this year a large number of them are also pushing out buds farther down their stems.

Research ecologist Bill Peachey said he has received reports of saguaros blooming in strange places from the Phoenix area to as far south as San Carlos, Mexico.

“And there are examples all over the Tucson valley,” he said. “It’s a big phenomenon.”

The exact cause is unclear, but the experts agree that the rare display is almost certainly a sign of distress.

“I’ve been thinking a lot about that,” said Ben Wilder, director of the University of Arizona’s Desert Laboratory on Tumamoc Hill.

His “back-of-the-napkin guess”: Last year was the driest on record in Tucson, and he suspects this year’s strange bloom is a response to that. “Essentially, the monsoon failed,” Wilder said.

Peachey thinks the trouble goes back further than that.

Though he can’t prove it, he said, what’s happening now could be fallout from a run of record heat in 2017 that damaged many of the cacti, disrupting their development. Drought since then has only made things worse.

“The last several years haven’t been good for saguaros, so they haven’t grown much,” Peachey said.

As a result, the plants have fewer new spine clusters — known as areoles — from which flowers typically sprout, so they are “reactivating” old, unused budding locations farther down the stem.

Peachey has been studying the same, 2-acre grove of saguaros near Colossal Cave since 1997, and he’s never seen anything like this.

In addition to the side blooms, some saguaros on Peachey’s plot are sporting crowns of flowers that are more tightly packed than usual.

The same thing is happening at Saguaro National Park, where visitors have been asking a lot of questions lately that staff members can’t answer just yet.

Other columnar cacti like the organ pipe and the Mexican giant cardon regularly sprout flowers along the sides of their stems. Saguaros almost never do — at least until recently.

Long-time park biologist Don Swann said the park launched a multiyear study of the unusual blooming activity after some limited reports of it in 2020.

“It’s just an interesting phenomenon that people had noticed but (that) hadn’t really been studied,” he said. “I don’t have data yet. We’re just sort of in the process of collecting data.”

On Tumamoc Hill, Wilder has also noticed a number of saguaros with stems that are bulging at the top and thinner down below, suggesting the plants are forcing what little water they have left upward to support the production of flowers and fruit.

He’s worried about the toll this could be taking.

“We’re already seeing the loss of some older individuals,” Wilder said. “Another failed monsoon could be catastrophic.”

This year’s strange bloom comes on the heels of another unexpected event: a rare crop of autumn flowers that sprang up last year on scattered saguaros around Tucson.

At the time, researchers called it the largest offseason bloom they’d ever seen.

What’s happening now is much more widespread and “much more significant,” Peachey said.

Saguaros generally produce flowers in early May and bear fruit in early summer. Their waxy white blossoms only stay open for a single day — just long enough, if they’re lucky, to be cross-pollinated by a honey bee, bat or bird.

Peachey said the seeds with the best chance for success tend to come from fruit produced during the last week to 10 days of June, “just in time to catch that first monsoon.”

Seeds dispersed at almost any other time of the year are unlikely to germinate and grow into a saguaro capable of surviving its first winter or two.

“You want to have seeds on the ground when the rain comes,” he said. “That’s the key to the whole thing.”

The side blooms are the saguaro’s “hokey workaround” to not having enough new budding locations up top, but Peachey predicts all the extra effort won’t amount to much.

In his experience, flowers that sprout from the sides of stems rarely develop into fruit. “I expect to see flowers dropping off like crazy,” he said. “It looks showy — and it is showy — but it’s not helpful to the plant in the long run.”

No end in sight

Peachey has more saguaro experience than just about anyone.

He has been surveying the cactuses on his Red Hills Saguaro Plot for so long that he can call out their assigned numbers without consulting the map on his clipboard. Plants he used to be able look down on now tower over his head with multiple arms clasping fleeting bouquets of blossoms.

During the annual bloom, he walks his rocky patch of state land off Old Spanish Trail every other day, usually in the company of longtime friend and volunteer Steve Smith and Smith’s wife, Ann Hollis.

“I count every blossom,” Peachey said.

Thursday’s count was 324 blossoms on 143 flowering saguaros with 411 individual stems. At least six of those cactuses were blooming for the very first time.

Peachey said there’s a “nasty rumor going around” that Arizona’s iconic cactuses are pumping out all these flowers as a “last gasp” before they all die.

He insists the situation is nowhere near that bleak, though saguaros are facing a growing threat.

He can see it in some of the plants on his plot: scars, discoloration, drooping arms and sagging trunks — cumulative damage from a recent run of hard freezes and record heat waves.

The good news is saguaros are built to last a long time, even in harsh conditions.

And in a reproductive life that can span a century or more, “chances are you’re going to have some really bad years and some really good years,” Peachey said. “I’m not too worried because this is just one year.”

Why do saguaros grow like that? 6 things to know about our cactus neighbors

Saguaro National Monument in Tucson was created in 1933 and expanded in 1961. It became a National Park in 1994.

Kick off summer with these Southern Arizona activities

With vaccinations up and COVID cases on the decline, people are itching to get out. Here are some ways to enjoy the start of summer this weekend.

The Nogales Police Department says the scene has been secured and there is no danger to the public.

Researches will use the bulks of the money to analyze asteroid sample being returned by the OSIRIS-REx spacecraft mission led by NASA.

National park visitors – and money – are coming back after 2020 plunge

Businesses around the Grand Canyon, among others, are optimistic as business picks back up.

The Arizona Game and Fish Department maintains 3,000 manmade watering holes for wildlife across the state. The ongoing drought has made that job more challenging than ever.

For Star subscribers: A University of Arizona-led research team has used ice from Greenland to chart the North Atlantic jet stream over the past 1,250 years and predict how the winds might change with global warming.

For Star subscribers: Roughly one third of Catalina State Park was scorched by last year's Bighorn Fire. It will probably take 30 years for the desert to resemble what it looked like before the fire, assuming it ever does. But so far, the recovery — jumpstarted by the wet monsoon — looks promising. 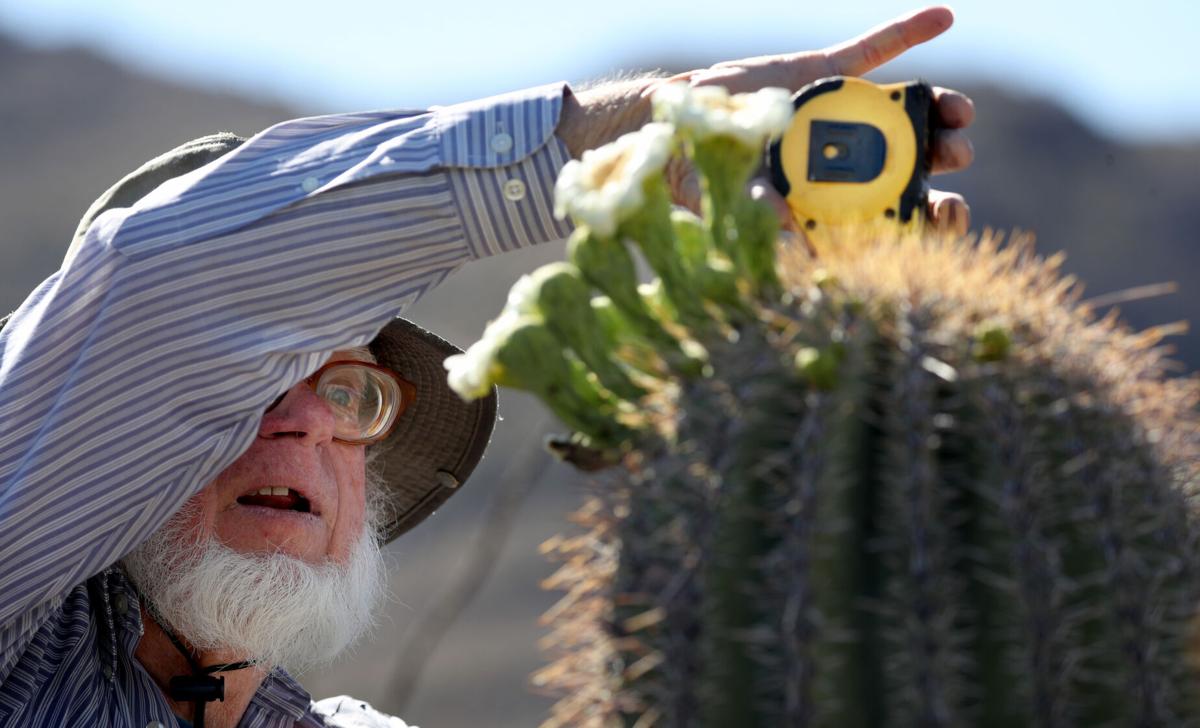 Researcher Bill Peachey gets measurements of saguaro blooms on state land in the Red Hills outside Colossal Cave Mountain Park. Typically, the giant cactuses sprout flowers only around the tips of their arms and trunks, but this year a large number are also pushing out buds farther down their stems. 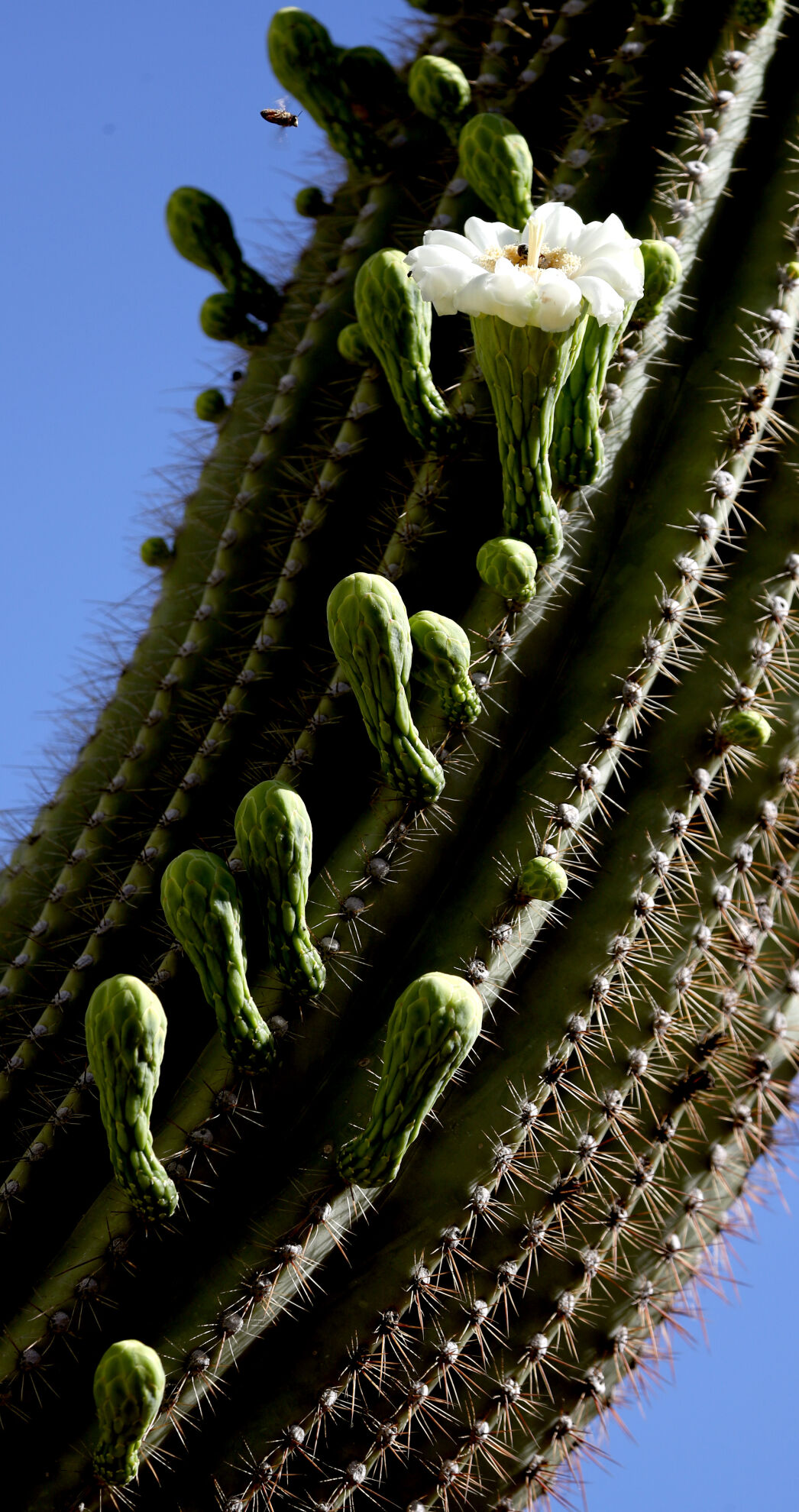 An unusual line of blooms runs along the side of a saguaro arm in the Red Hills outside Colossal Cave Mountain Park. The exact cause is unclear, but experts agree that the rare display of side blooms is almost certainly a sign of distress.

A carpenter bee heads for a side bloom on a saguaro. The waxy white blossoms only stay open for a single day — just long enough, if they’re lucky, to be cross-pollinated by a honey bee, bat or bird.