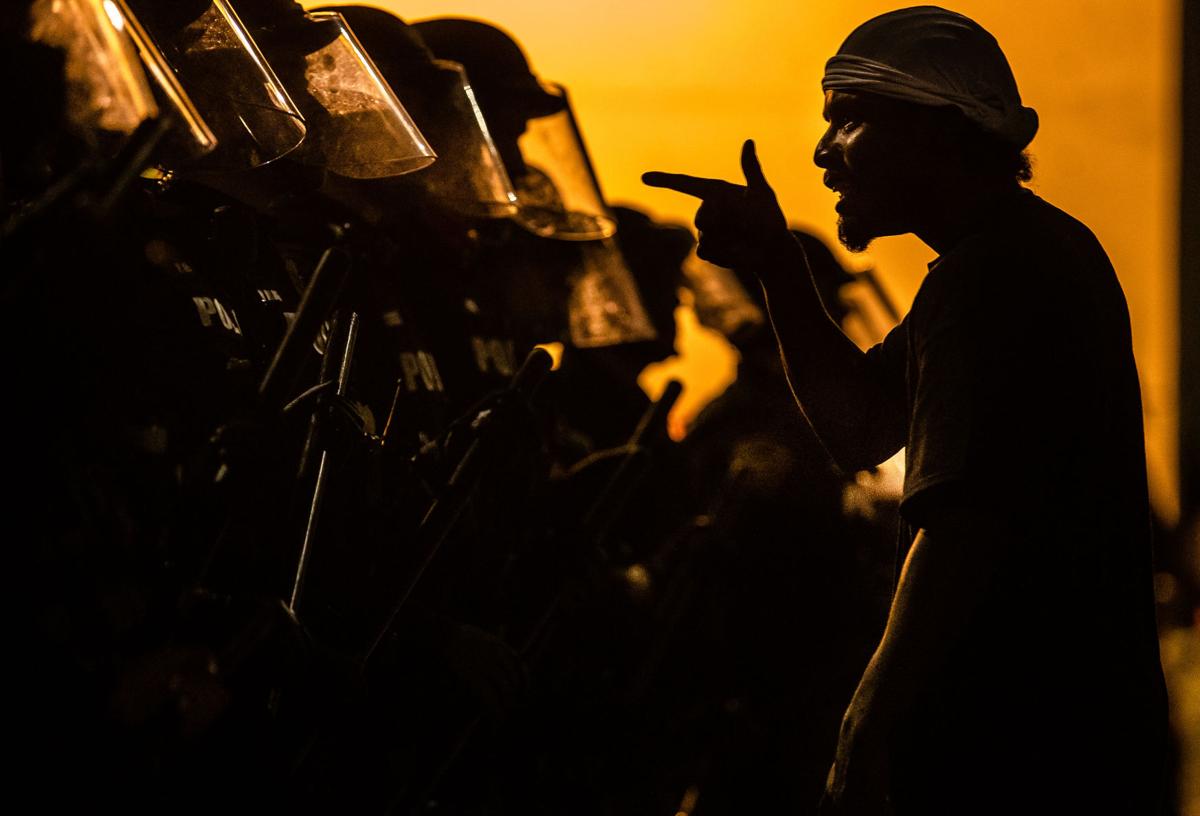 A man vents at a line of Tucson police officers in riot gear at Cushing Street and Church Avenue. After Friday’s night of vandalism, hundreds of officers were blocking off downtown streets and bracing for another night of trouble Saturday. 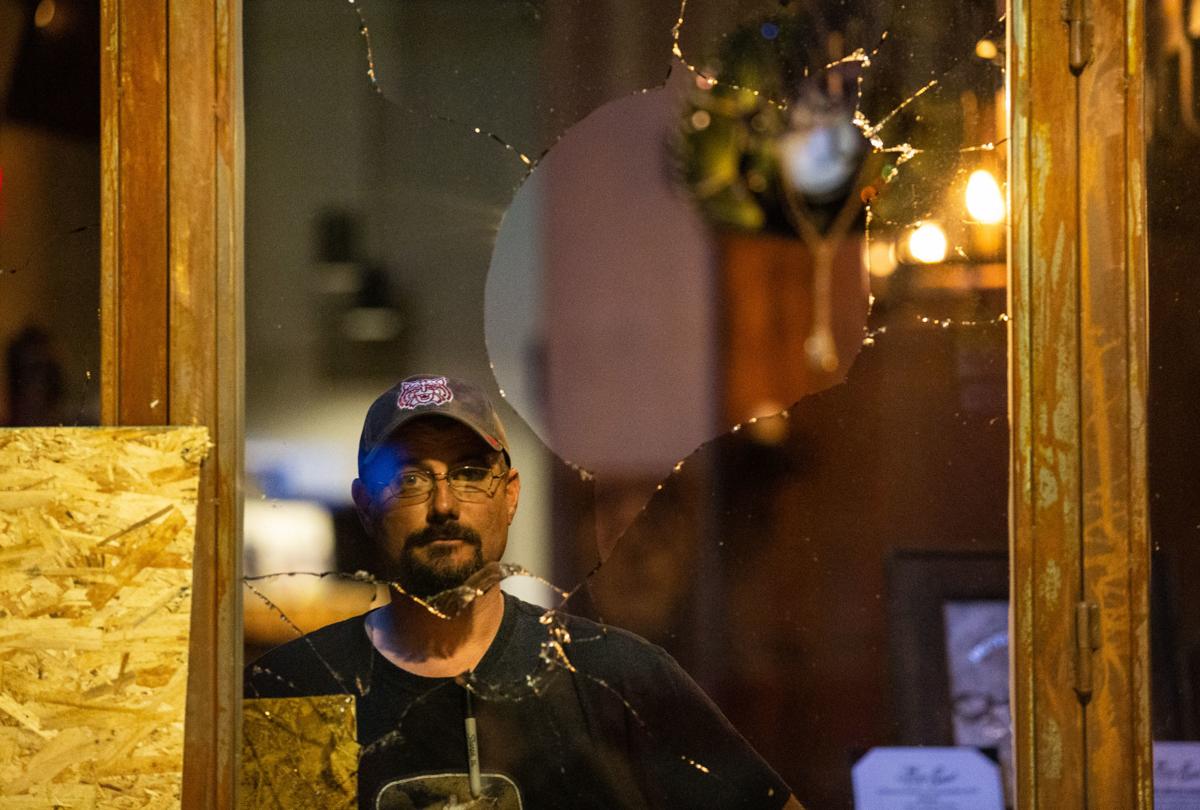 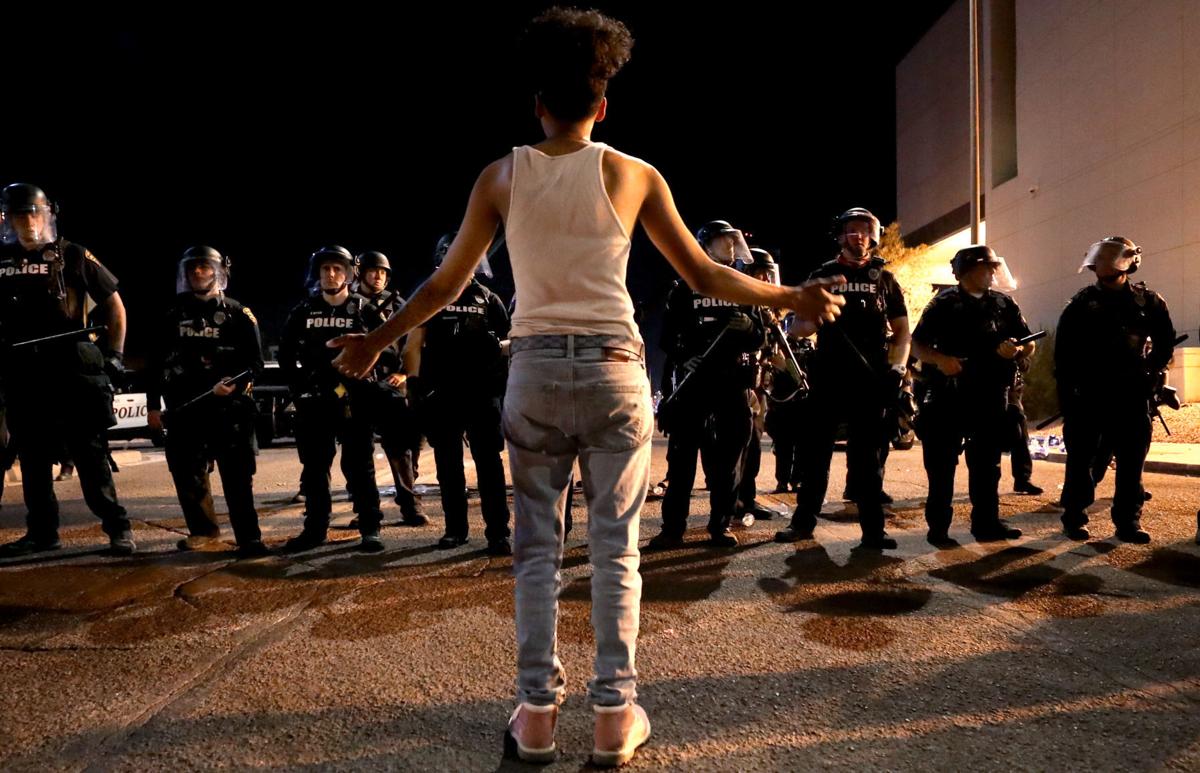 A woman asks for a hug from the line Tucson Police officers at the corner of Cushing and Church, May 28, 2020, during a demonstration in the wake of the death of George Floyd in Minneapolis.

Tucson leaders announced a community rally and vigil to talk about race relations while simultaneously bracing for another night of protests Saturday night.

Mayor Regina Romero said the family of George Floyd, the unarmed black man who died during an arrest last week in Minneapolis, deserve swift justice and that systemic reform is all long overdue, during a news conference on Saturday. But, she said, violent protests are not Tucson, and they’re not going to be what moves the community forward.

“Violence only brings violence,” Romero said. “Harming locally owned mom-and-pop businesses and inflicting harm does nothing to accomplish justice for Mr. Floyd and only serves to divide our community. These are not just businesses. These are Tucsonans. They are people’s livelihoods. Many are minority-owned and are already suffering greatly during these difficult times we are living in.”

Leaders in Tucson’s black community are planning a peaceful rally and candlelight vigil for people who have lost their lives to excessive force by police at 7 p.m. Monday at the Dunbar Community Center, 325 W. Second St.

Some downtown streets were set to be closed Saturday evening, and hundreds of officers were to be deployed downtown in case of another night of protests. In a press release, Police Chief Chris Magnus said anyone arrested would not be cited and released. “Arrestees will go to jail,” he said.

On Friday night, fights broke out, and demonstrators smashed windows and committed other acts of vandalism in the area.

One man was arrested on two felony counts of aggravated assault on an officer for throwing rocks and other items at officers, said Tucson police spokesman Pete Dugan. Three others were arrested on misdemeanor charges for obstructing a police thoroughfare. The crowd of protesters on Friday reached up to 400.

While the majority of protesters were peaceful, limiting their activity to chanting or silent solidarity, a handful of people smashed windows and spray-painted walls, prompting Tucson police on Friday night in tactical gear to attempt to break up the crowds.

Friday’s protest began east of Armory Park about 6 p.m. and came to a head shortly after 10 p.m., when hundreds of people converged at West Cushing Street and South Church Avenue, between the Tucson Convention Center and the police headquarters. Protesters chanted, “No justice, no peace” and “Say his name: George Floyd,” along with other messages. Scuffles broke out among protesters more than once, with others stepping in to break them up. Magnus said some protesters were in the street until nearly 4 a.m. Saturday.

Magnus said Saturday that shots were fired within 100 yards of the protest and several officers were hit with objects, but none was seriously injured. He also estimated damage to downtown businesses at upward of $200,000.

“What was accomplished Friday night by people throwing rocks, fighting with each other, setting fires, damaging property and putting the safety of others at risk? Nothing,” Magnus told the Star shortly after midnight Saturday. “And ironically, the very officers many in the crowd were screaming obscenities at condemn what happened in Minneapolis and are committed to justice and professionalism.”

Saturday morning, Tucson business owners and other residents came out to clean up broken glass, board up broken windows and scrub graffiti off walls.

Lifetime Tucsonan Jocelyn Cazueta scrubbed away graffiti at the corner of Broadway and Scott about 9 a.m. She woke up to a Snapchat from a friend who was downtown cleaning. She didn’t ask any questions and just headed to the store for more cleaning supplies.

Cazueta is one of a number of Tucsonans who took it upon themselves to start cleaning up the aftermath of Friday night’s protest.

With her was Enrique Lopez. He saw that a friend had posted on Facebook about cleaning up. They met downtown at 8 a.m., and the five of them picked up glass.

“You can’t protest violence with violence,” Lopez said. “That doesn’t make any sense, so I don’t understand why they were breaking stuff for graffitiing.”

Nick Wayne, the owner of HighWire Lounge, was scrubbing graffiti across the street.

Tom Heath, chairman of the Downtown Merchants and Retail Council, was cleaning up a half-block away.

“I saw the small businesses, the damage done, and I just needed to help and support,” he says. “They’ve been through enough in the last two or three months, and this is just another hurdle for them to overcome. I understand all the anger and frustration over what’s happening, and I just hope that our small businesses don’t take another hit. And if they do, we’ll be here to help them and support them.

By Saturday afternoon, Tucsonan Alexis Walters had posted a GoFundMe page to raise $1,000 toward the repair of popular downtown restaurant Charro Steak’s windows. The restaurant announced is closing temporarily because of recent events.

“During recent protests in Downtown Tucson our ally El Charro, was caught in the mix and had all of their windows broken during the protest,” the page said. “El Charro is a family owned Mexican business that has always given back to its community. They stand with us, can we stand with them?”

By Saturday night, the page had raised a little over the $1,000 goal.

A peaceful George Floyd Memorial March that was planned for Saturday evening was postponed, according to a post on Facebook.

Mariah Barnett, a political science major and member of the coalition of black student organizations at the University of Arizona said the event was postponed because of the protests on Friday. Barnett said she and others are working with black organizers in Tucson to create an event that is by black people and for black people.

“I’m not going to say that I want violence to happen, but I think we’ve been peaceful for long enough and nothing’s happened,” she said. “So I think the protest needs to be black people’s voice being amplified and lifted up, and us walking and protesting and just showing Tucson that we’re angry.”

If you have property damage

For local businesses with property damage from the protests:

• For property damage due to protests file a police report at tucsonaz.gov/apps/crime- reporting.

• For graffiti removal go to tucsonaz.gov/es/graffiti-removal-report.

• Rio Nuevo is providing reimbursement for glass replacement. A police report and invoice must be sent to Downtown Tucson Partnership at info@downtowntucson.org.

Not long after 11 p.m., the situation became more tense and chaotic, and police fired paint balls.

For Tucson social justice leader, the fight for equality is far from over

A man vents at a line of Tucson police officers in riot gear at Cushing Street and Church Avenue. After Friday’s night of vandalism, hundreds of officers were blocking off downtown streets and bracing for another night of trouble Saturday.

A woman asks for a hug from the line Tucson Police officers at the corner of Cushing and Church, May 28, 2020, during a demonstration in the wake of the death of George Floyd in Minneapolis.