And this isn’t just because of the children, whose enthusiasm and innocence often make us hopeful.

It’s also about the dedication of a young police officer, Jason Barton, who arrived after a busy night shift to do jumping jacks with these kids.

Barton shows up at Nash most Wednesdays to assist his colleague, Ashley Covarrubias. She’s also a neighborhood patrol officer who, in 2017, piloted “You Can, Too” to help children and teens from highly distressed areas, areas like the neighborhoods surrounding Nash.

The officers’ idea, simply put, is to help young people overcome fear, think critically and realize their potential. The bonus is children also benefit from getting to know law enforcement in a different context, Covarrubias said, since those living with problems at home might only know police as the uniformed adults who show up when something bad happens.

The officers’ work at Nash, 515 W. Kelso St. in the 85705 ZIP code area, complements what many teachers there are also trying to impart, in spite of dealing with the oversized classes and scant resources typical for Arizona’s teachers: You can succeed, you can decide for yourself, you can be college-bound.

Unfortunately, outside of a school campus full of positive slogans and dedicated adults, there are many factors working against their efforts.

Tucson’s 85705 ZIP code includes several small neighborhoods that are among Tucson’s most distressed due to poverty, high unemployment, widespread crime and scant resources. The crime rate in the area is more than double that of other Tucson neighborhoods.

About 12,000 people live in the area and the median household income is $23,354, according to a 2018 study by the University of Arizona’s College of Architecture, Planning and Landscape Architecture. That’s significantly lower than the median income in the city of Tucson, which is $32,889.

The unemployment rate is 8.9 percent, nearly double that of the city overall, and about 74 percent of the people are renters instead of home owners. About 65 percent of the households do not have a vehicle.

All of those factors lead to the overall picture: poverty.

And that also contributes to this: The ZIP code has one of the highest rates of child welfare calls to the Department of Child Safety in the state, while police spend endless hours on issues and crimes that tie back to drug dealing and addiction, particularly crystal methamphetamine and heroin.

“We’re not going to be able to arrest our way out of these issues,” said Covarrubias.

What’s needed most, she said, is building up community partnerships and providing opportunities for change.

And that’s exactly what the next several years are going to be about in 85705, where a collaborative effort called “Thrive in the 05” is getting started between the city of Tucson and Arizona State University’s School of Social Work.

Over time, the idea is to create more teamwork, more new ideas, more of what’s already happening on Wednesday mornings at Nash.

The area just north of Nash Elementary was once considered the Tucson gateway, with motels and entertainment stops making it a place of booming tourism.

“Miracle Mile” was vibrant throughout the 1960s, even though Interstate 10 was constructed in the late 1950s and replaced Miracle Mile as the main way to access the city.

It wasn’t until the 1970s that the area began to change, and with the increasing crime came challenging social issues.

Today, 85705 includes hundreds of businesses and the downtown campus of Pima Community College.

These neighborhoods are less than two miles from downtown Tucson and the University of Arizona, and include Old Pascua, the oldest settlement of the Pascua Yaqui Tribe in Tucson.

The people who are involved with “Thrive in the 05” want to build on those successes. They are focused on 2.6 square miles loosely bounded by Miracle Mile to the north, Speedway to the south, Stone Avenue to the east and I-10 to the west.

Nadia Roubicek is coordinating the Department of Justice project, with a focus on crime reduction and youth programming.

She’s teaming up with Alison Miller, who is leading the HUD project through her job with the city of Tucson’s Department of Housing and Community Development.

Miller’s part is focused on housing, neighborhood transformations and increasing opportunities for 85705 residents, including a big makeover for Tucson House, one of the city’s biggest public housing sites.

“The ultimate goal is to make sure people have access to choices that will help them live to their potential,” said Mary Ellen Brown, who is supervising the DOJ grant and providing research for the whole project. She has carried out similar projects in Baton Rouge and Shreveport, Louisiana.

“We will be focusing on sustainability from the beginning, so that we’re not just coming in and doing a short-term project and then it’s over,” said Brown, an assistant professor with the ASU School of Social Work in Tucson.

At a recent meeting between city employees, Tucson police and the residents of Tucson House, things couldn’t get started until a man some residents call “the Boss” arrived.

That’s Paul Navallez, who manages the Tucson House for the city and who has become, in his three-month tenure, a well-liked advocate.

He’s there almost every day to help to hear about problems, and also to share a story or a laugh.

Tucson House was originally built as 17 stories of luxury apartments in 1963 and then eventually abandoned before becoming one of the city’s biggest public housing sites.

The 408 units currently provide 27 percent of Tucson’s public housing offerings. About 60 percent of the residents are elderly and about 40 percent are people living with some sort of disability. There are also 45 units for people who are homeless, mostly veterans.

Corky Poster, a local architect who specializes in affordable housing and livable spaces, says he did a “light remodel” of the building in 1997 when there were chunks of concrete falling away and the plumbing system needed a revamp.

Today, a lot more than a revamp is needed for a building with significant structural issues, and Poster has joined Miller in listening to residents about what they’d like to see.

The first order of business appears to be the elevators.

But the problems, expressed to Tucson police and city workers at that recent meeting, are not just structural.

Residents want more security and more services. Sometimes elderly people are so isolated that they die alone in the apartments days before someone realizes it.

In some cities, Poster said, the Tucson House would simply be demolished to make room for new, mixed-income housing. But the building is now registered nationally as a historic structure, and tearing it down is unlikely.

And it’s not what many of the residents want, as they say they are fond of their home. They just want things to improve.

“It doesn’t need to be demolished,” Poster said, “it needs to be reinvented.”

It’s going to take planning and collaboration, time and money, not just for the Tucson House, but for the whole area.

For the children at Nash, and the elderly in the huge tower.

This Arizona Daily Star story is the first in an occasional series of articles about those who live and work in 85705, including the issues that cause its deep-seeded distress,  as well as the community leaders and programs that could bring about lasting change.

What: A day-before Mother's Day spring festival and resource fair as part of the "Thrive in the 05" project. There will be free flowers for mothers, as well as raffles for mothers and youths, living in that zip code area. There will also be the unveiling of a butterfly mural.

A newly formed nonprofit will include programs to help children facing adversity and to improve social-emotional learning in nearby schools.

They would have restored federal funding to poor families for child-care help, job training and direct cash assistance.

Arizona not keeping up when it comes to helping vulnerable kids, report says

Once-homeless teen realizes his dreams thanks to 'angels'

Sunnyside senior is one of hundreds of homeless or formerly homeless Pima County teens who are set to graduate this spring.

“It was the best of times, it was the worst of times” — Charles Dickens

Sometimes intensive therapy is needed; other times it's a bit of respite care, listening and kindness

Today will be breezy with temperatures slightly below normal.

The area is within the troubled 85705 ZIP code, where a collaborative effort  is underway to better the quality of life for families in the area.

The decrepit Tucson House could anchor a revitalized, affordable neighborhood that re-uses the old No-Tel Motel 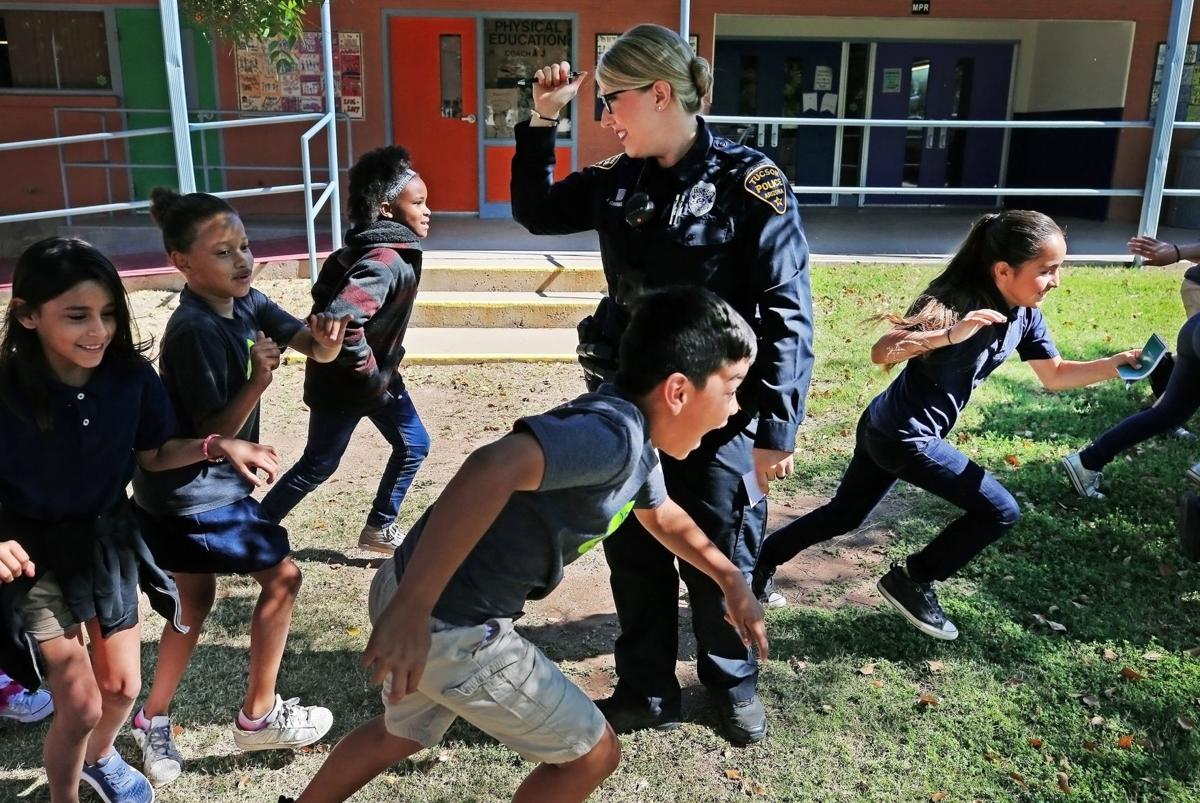 Tucson police Officer Ashley Covarrubias gives Nash Elementary School students the command to start their timed activity. On Wednesdays, Covarrubias and a fellow officer run a program that helps students get to know law enforcement in a different context.

A big makeover of Tucson House is part of the plan to bring positive changes to the 85705 ZIP code. 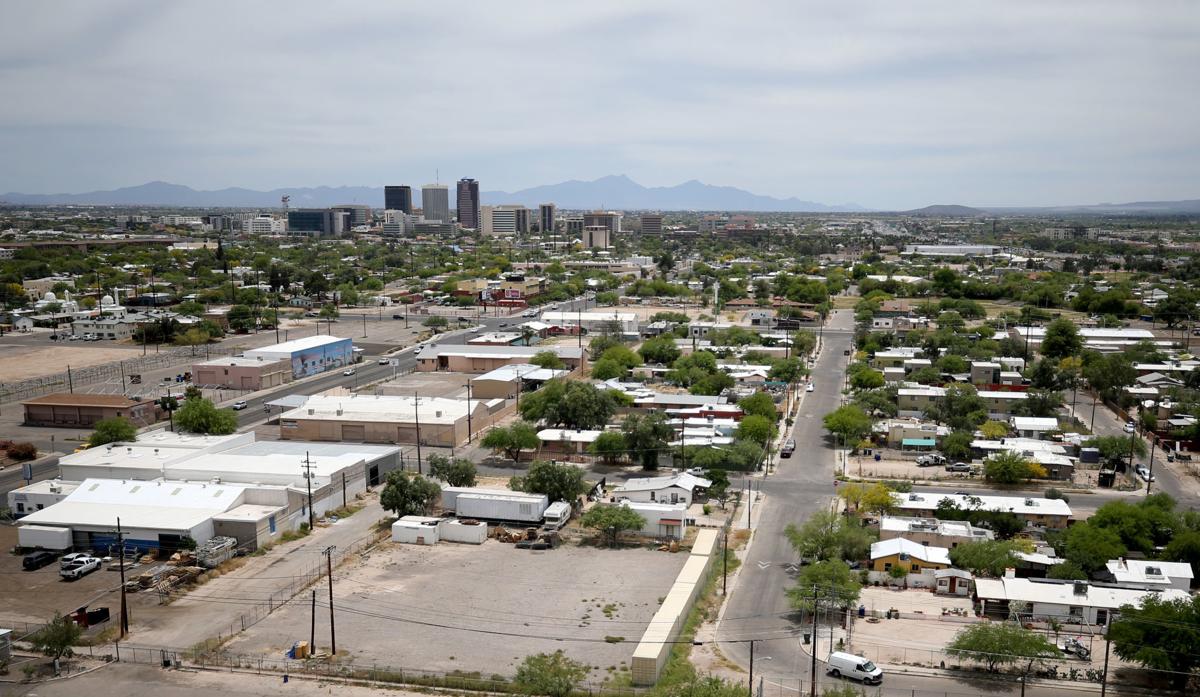 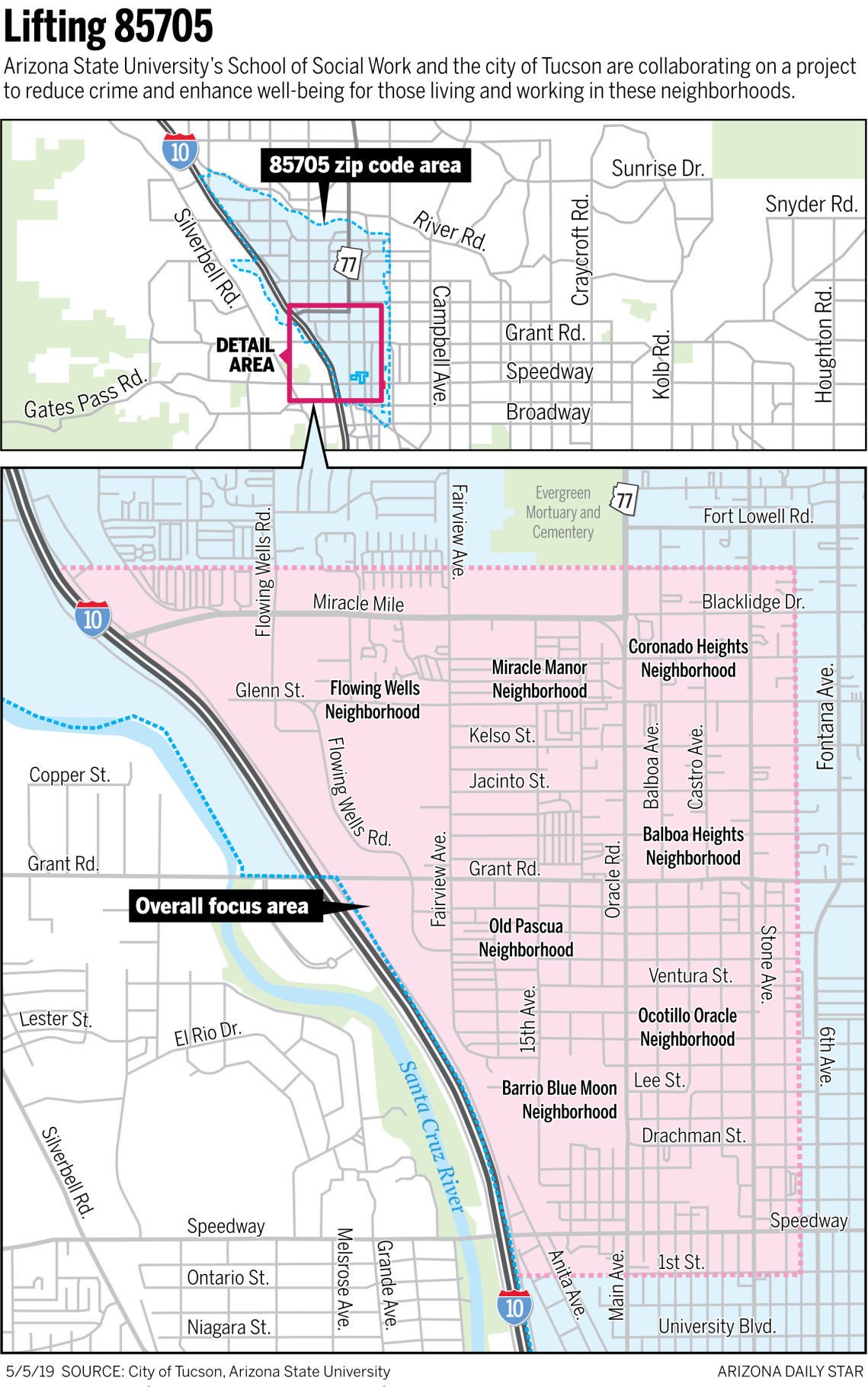 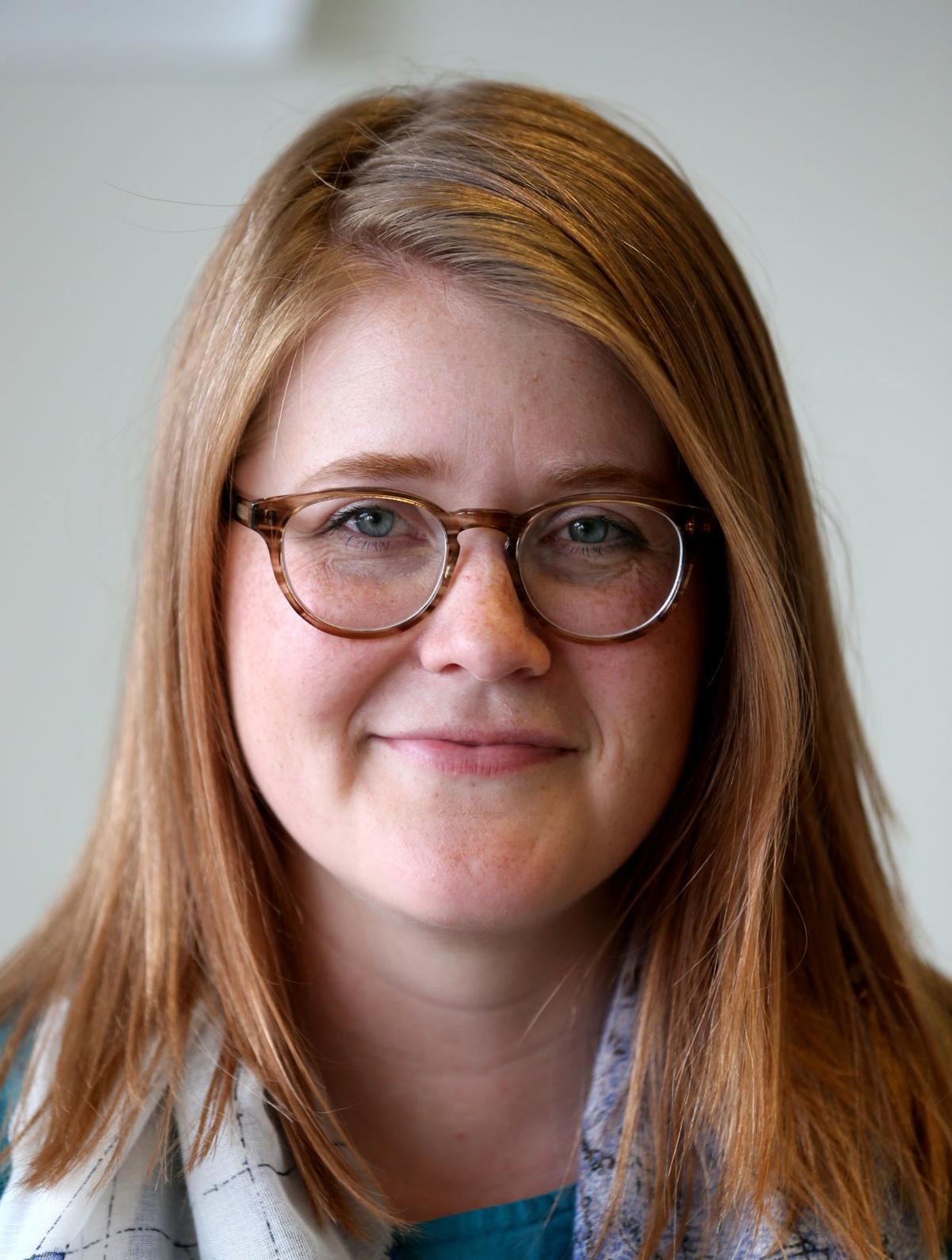