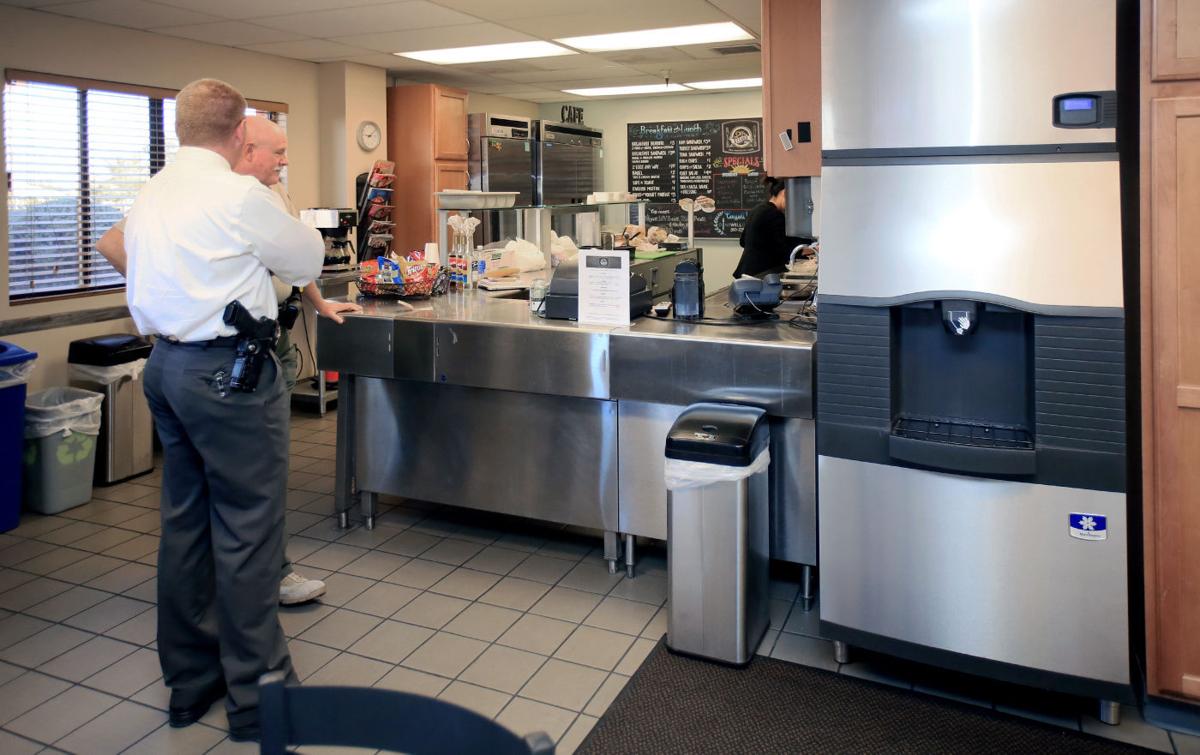 Pima County sheriff’s employees wait for food at the Off the Record cafe at department headquarters on East Benson Highway. 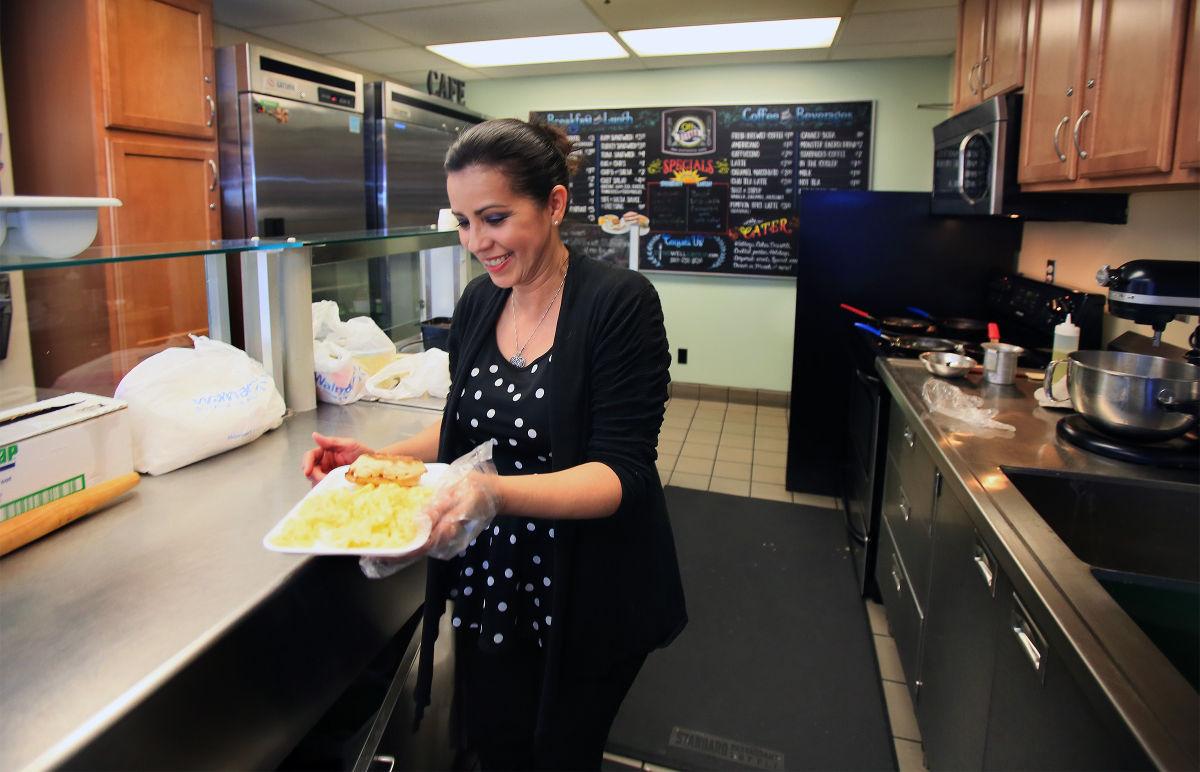 Anita Curran serves an order of scrambled eggs and English muffins at the cafe, which used equipment purchased with tax dollars. 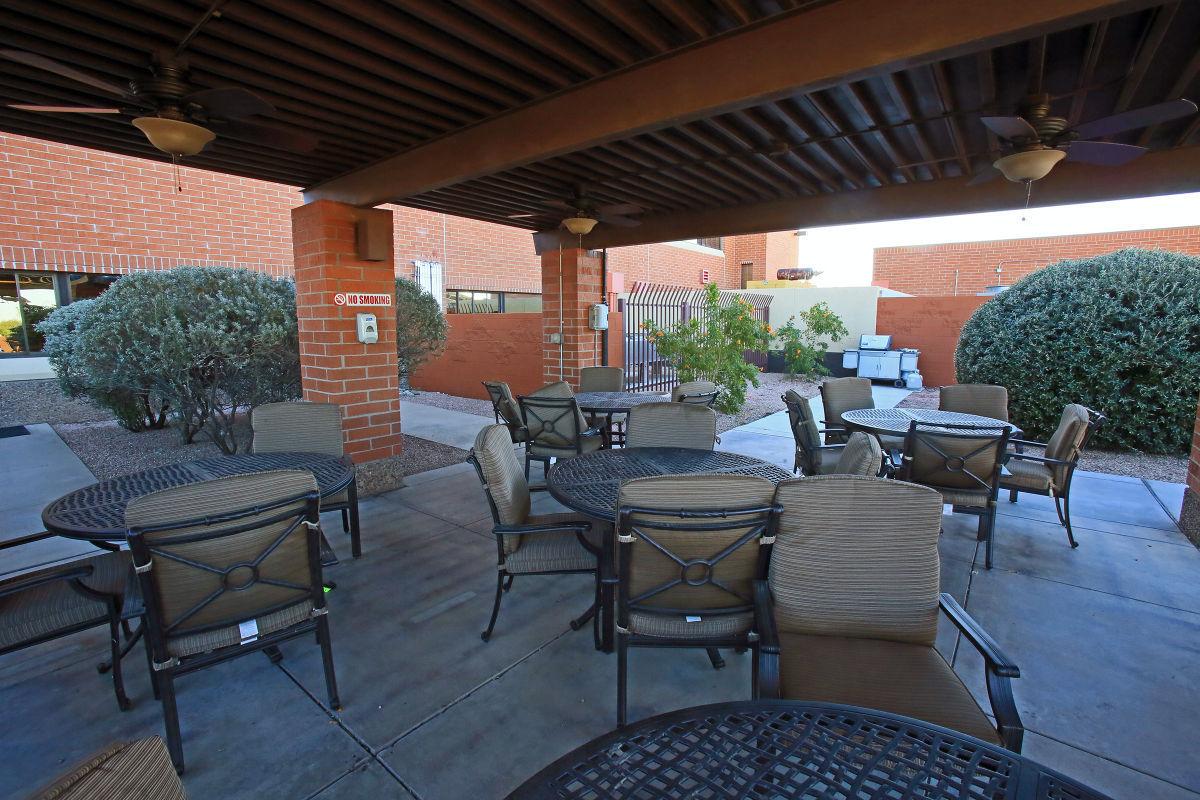 Sheriff’s Department employees can eat and take their breaks in this covered patio next to the Off the Record cafe. 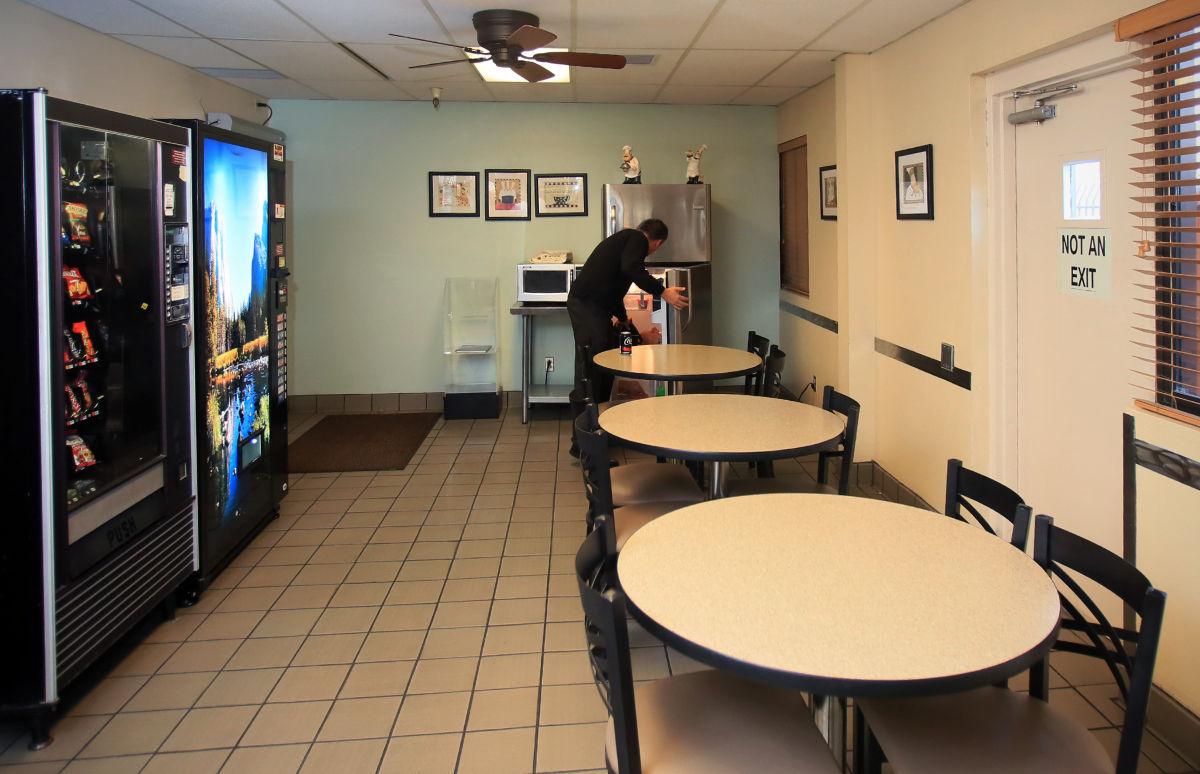 The Pima County Sheriff’s Department broke state law when it allowed a high-ranking official’s relative to operate a restaurant inside its headquarters.

Off the Record — The Exclusive Café has operated in the building without a contract and without paying rent for more than three years, and is run by the niece of Pima County Sheriff’s Chief Deputy Christopher Radtke.

The issue with that arrangement is that when department officials selected vendors they broke a state law that says the contract must be offered first to legally blind vendors through an Arizona Department of Economic Security entrepreneurship program.

The mini Randolph-Sheppard Act, a state version of a federal law with the same name, says priority must be given to blind vendors in operating snack bars, cafeterias and vending machines on government property, according to the Arizona Department of Administration’s website.

Before the latest cafe operator came on board, the sheriff’s department had worked with outside food service providers for more than 15 years, said Capt. Harold Janes, the department’s administrative services director.

In November County Administrator Chuck Huckelberry told the Star the sheriff’s department didn’t violate procurement policies by not offering the space to other food service providers before giving it to Radtke’s niece, Nikki Thompson.

The county has since learned some steps were missed.

“This ended up being a unique situation,” county spokesman Mark Evans said last week. “Some assumptions were made early on that were not accurate.”

Asked whether county officials knew about the Randolph-Sheppard Act, Evans referred the question to the sheriff’s department.

“This all started with the sheriff’s department — it’s their facility,” he said.

But when contacted by the Star, Janes referred the issue back to the county.

“The Sheriff’s department café opened in the mid- to late 1990s and I don’t know who exactly was in charge except Chief Deputy Stan Cheske and Sheriff Clarence Dupnik,” he said, referring to two officials who are now retired.

He was unfamiliar with the mini Randolph-Sheppard Act, but said Pima County Facilities officials would be who to ask about the law.

Regardless of who failed to notify DES about the cafe space, government agencies are required to offer the contract first to the DES program, and the mini Randolph-Sheppard Act was broken in this situation, said Tucson employment attorney Michael Boreale.

“The words ‘shall cooperate’ means that the government agency must notify DES about the facility. So if they didn’t notify DES, by plain reading of the statute, they violated the law.”

Repercussions for violating the mini Randolph-Sheppard Act depend on if there’s standing to pursue a case and damages were inflicted, Boreale said.

contract will be put out for bid

After clarifying its information in November, the county offered the contract for DES to review in December, Evans said.

“The AZDES Review Committee declined the food service (cafe) at the Sheriff’s Department Administration Building,” she wrote in an email last week.

Because DES was not interested in including the sheriff’s cafe space in its enterprise program, the county now is free to offer the contract to outside vendors, Evans said.

The contract that will be developed by the county will include a monthly rental rate, Kwiatkowski said.

For now Thompson continues to operate the cafe in the headquarters without a contract and rent-free.

Off the Record had a second location inside the Pima County jail that the Star found in November was operating without a county health permit.

After the Pima County Health Department was told about the situation, Thompson closed the cafe, which served jail employees.

When contacted by David Ludwig, the health department’s consumer health and food safety program director, Thompson told him she didn’t know she needed a permit for each location.

But an email obtained by the Star that Thompson sent to Corrections Chief India Davis and Radtke days later says she didn’t obtain a health permit for the jail location because of its “outrageous” cost.

“This was the issue from the beginning,” Thompson wrote in the email. “Since it’s a county building, that cost all falls on you guys, and that’s how we ended up skipping this huge step in the beginning because the cost was outrageous.”

To apply for a health permit in order to reopen, Thompson would have to submit a construction plan and menu review, which costs $480, environmental health supervisor Loni Anderson told Thompson in an email.

She has since decided not to obtain a health permit and the jail cafe remains closed, despite an email from Davis saying the jail was willing to do all the work necessary to obtain the permits.

Receipts also show the department bought more than $12,000 worth of equipment for the headquarters’ cafe, days before Thompson moved in.

Radtke said in November he’s had nothing to do with the cafe or its operations since he told the department about his niece when it was looking for someone to operate the cafe in 2012.

“I offered them up to the sheriff and, recognizing the conflict, backed out of the process because of our relationship,” he said.

However, emails obtained by the Star show that after the lack of permit was discovered in November Radtke received and forwarded correspondence related to the cafe’s operations.

Resigned from the department after failing alcohol breath tests on duty.

Sheriff says inquiry would be waste of money, adding that he hasn't been approached.

Cafe lease at sheriff's headquarters will go to public auction

Restaurant run by chief deputy's niece had no permit.

The original response provided by the Pima County Sheriff's Department to the Star's request for the cafe's contract and a list of expenses. T…

The Pima County Sheriff's Department seeks the public's help in identifying a suspect who allegedly robbed a Subway restaurant, stole an emplo…

Pima County sheriff’s employees wait for food at the Off the Record cafe at department headquarters on East Benson Highway.

Anita Curran serves an order of scrambled eggs and English muffins at the cafe, which used equipment purchased with tax dollars.

Sheriff’s Department employees can eat and take their breaks in this covered patio next to the Off the Record cafe.