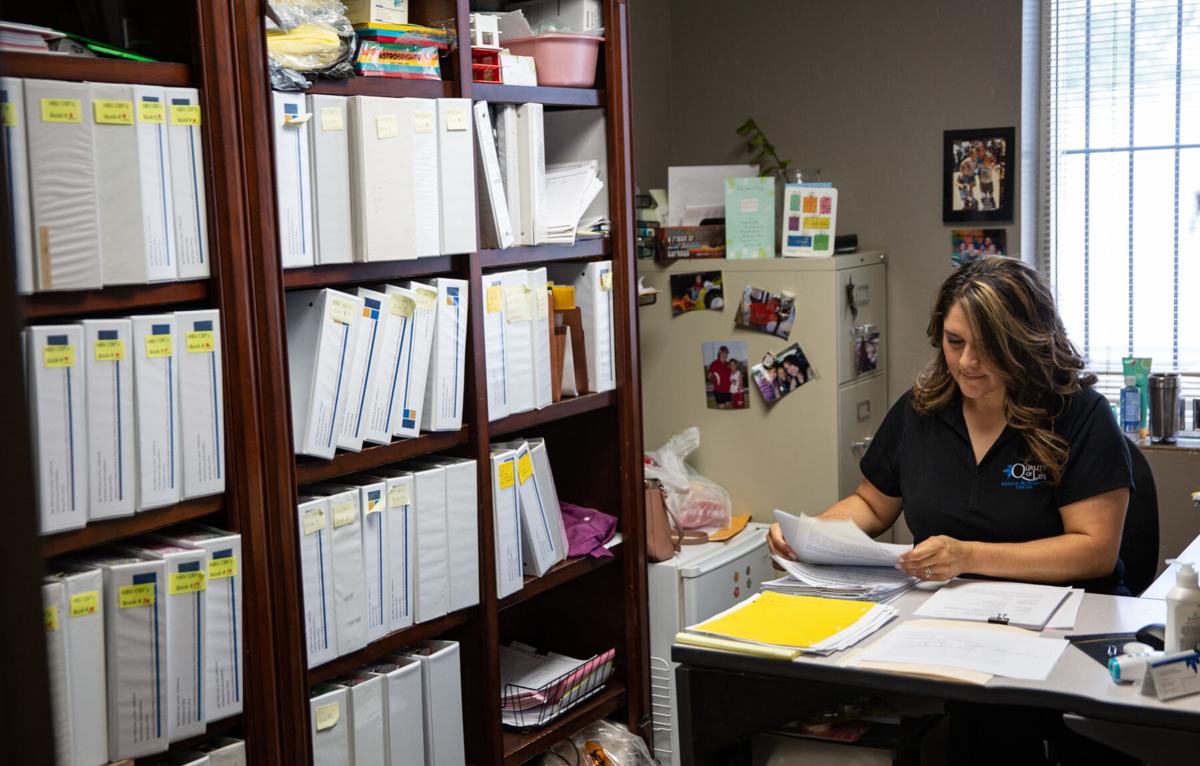 Yvonne De Los Reyes, a clinical research coordinator, works in her office at the Quality of Life Medical and Research Center. The facility hopes to use as many Tucsonans as it can in a Phase 3 COVID-19 vaccine trial. 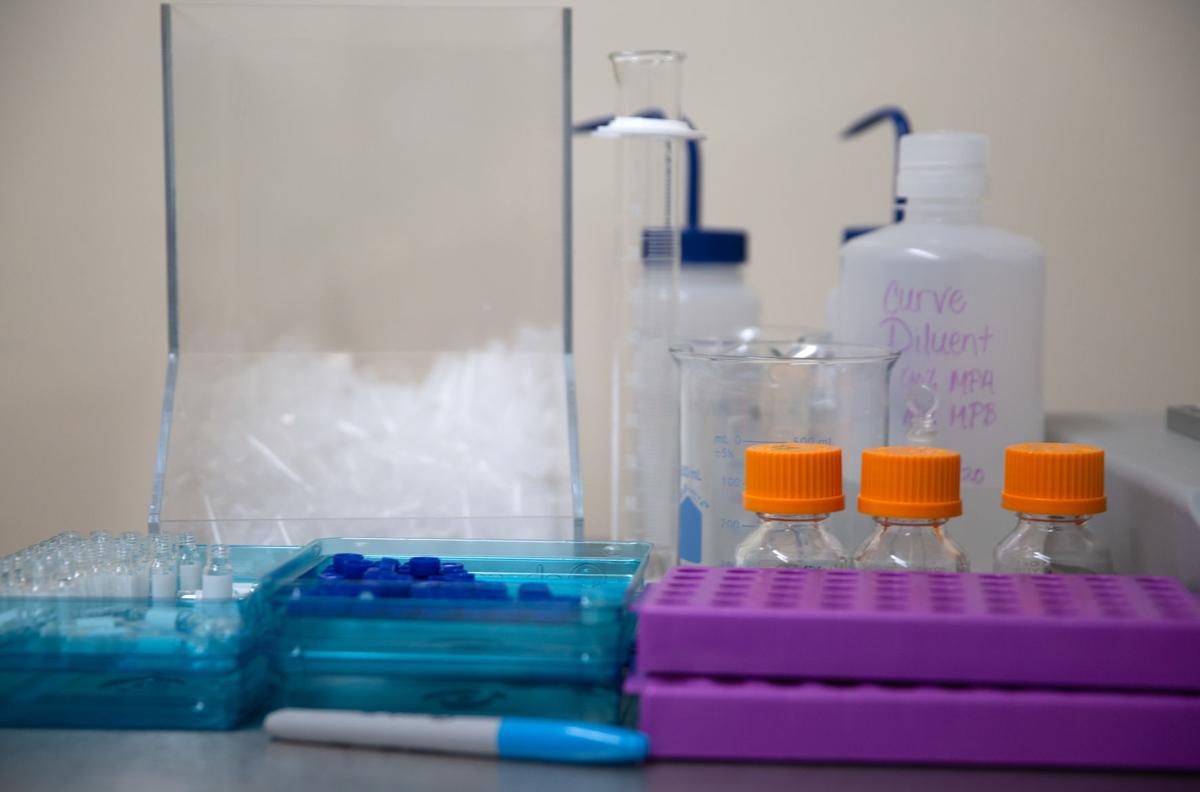 The Quality of Life Medical and Research Center, 5390 E. Erickson Drive, will be one of 87 clinics nationwide conducting Phase 3 trials of Moderna’s mRNA-1273 COVID-19 vaccine.

A Tucson research center is one of 87 clinics around the country to be selected to participate in Phase 3 of a COVID-19 vaccine trial.

Quality of Life Medical and Research Center, located on Tucson’s east side, will take part in the national study and recruit hundreds of community members to participate in the trial.

“I’m very honored that they selected us for this particular study. It’s probably the most important research study that I’ll be involved in in my career,” said Dr. John McGettigan, owner and founder of the research center.

Moderna, a national biotech company, is leading the study and announced the beginning of Phase 3 earlier this month. The company is looking to recruit up to 30,000 participants nationwide.

The initial phase of the vaccine trial, which is also backed by the National Institutes of Health, began in March, and interim results from Phase 1 were published in the New England Journal of Medicine on July 14.

According to the study results, the investigational vaccine, mRNA-1273, was generally well tolerated among participants and prompted neutralizing antibody activity in healthy adults. Researchers found that the vaccine was able to induce antibodies directed at a portion of the coronavirus’ “spike” protein, which the virus uses to bind to and enter human cells.

Initial findings are based on the trial’s first 45 participants, ages 18 to 55. Participants were separated into three groups and received two injections, 28 days apart, of various dosages. More than half of the participants reported fatigue, headache, chills, muscle aches or pain at the injection site, but no serious adverse effects were reported. Symptoms were more common following the second vaccination and in those who received the highest vaccine dose.

In Phase 3, trial participants will receive two doses of the vaccine, or a placebo, 29 days apart. Researchers will follow them for up to two years, conducting regular antibody checks and monitoring them for any adverse reactions to the vaccine.

With a fast-track designation from the U.S. Food and Drug Administration, McGettigan said he is not anticipating it will take that long for the vaccine to be deemed effective. His team has already received inquiries from a few hundred people in the Tucson area who want to participate in the trial, many of whom are already his patients.

“It’s just a huge honor to me that my patients have confidence in me to participate in this very important study. In research, we call those folks medical heroes — people who volunteer for research — because they’re sticking their neck out a little bit,” he said. “Phase 3 is the last phase theoretically. If all goes well, it will hopefully be something that’ll be available to all of us. And that’s the whole goal.”

McGettigan said the primary focus of the study at his site will be to recruit health-care workers and other people who are most at-risk throughout the pandemic.

“The other group that’s pretty important to get vaccinated is folks who work in assisted living facilities and nursing homes, but also people in all the essential businesses like our grocery store workers,” he said. “They’re facing the public every day, constantly, knowing they’re at risk, but they’re obviously trying to perform an important service for the rest of us.”

They are also hoping to recruit minority participants such as those from Hispanic and Native American communities, as well as seniors who have chronic conditions.

There is no set limit to how many participants a site should have, but McGettigan said he is hoping to get as many Tucsonans involved as he can. Anyone over the age of 18 can participate, but they will not accept any volunteers who have had a known and confirmed COVID-19 infection.

“We encourage people to reach out to us if they want to be a part of the solution of this major problem that we’re dealing with,” he said.

McGettigan and his team will begin their portion of the study later this week. Anyone who wishes to participate can email covid19@qlmc.com or call 441-5573.

“There are over 100 vaccines being worked on to help fight this pandemic,” McGettigan said. “It’s interesting to see the medical community and the pharmaceutical companies kind of come together on this because it’s such a huge problem throughout the world. Finding a solution sooner is better than later.”

Fourteen TUSD African American seniors were recognized by A Legacy of Excellence in a drive-in ceremony postponed from April due to COVID19. T…

New federal data show that more than 2 in 5 federally licensed nursing homes in Pima County have reported at least one death as of June 28, while more than 3 in 5 have confirmed at least one case among residents.

COVID-19 hospitalizations will have long-term impact on patients, health-care system

While the long-term impacts of the novel coronavirus are largely unknown, the effects of extended ICU stays and intubation on severely ill patients are alarmingly clear.

In Pima County, businesses are not required to report that an employee has tested positive for the virus, nor are they required to inform the public or coworkers.

Across Pima County, 13,449 cases of coronavirus have now been confirmed, up 179 cases from the day before.

Across Pima County, 14,963 cases of coronavirus have now been confirmed, up 163 cases from the day before.

Across Pima County, 15,109 cases of coronavirus have now been confirmed, up 146 cases from the day before.

If rates continue, COVID-19 will fall behind heart disease and cancer as the leading cause of death of Arizona.

Tucson is expanding free, public Wi-Fi to areas most impacted by pandemic

The City of Tucson is moving forward with a plan to expand access to free, public Wi-Fi throughout the city, particularly in areas suffering from a “digital divide.”

As of Friday, more 166,000 Pima County residents had undergone COVID-19 testing. Three test sites and nine mobile testing sites have been set up.

Tucson's rise in drug overdose deaths could be linked to pandemic

The pandemic could be intensifying many risk factors associated with increased drug use and overdose, including economic distress, social isolation and anxiety. Since January, the Pima County Medical Examiner has recorded 221 overdose fatalities.

Yvonne De Los Reyes, a clinical research coordinator, works in her office at the Quality of Life Medical and Research Center. The facility hopes to use as many Tucsonans as it can in a Phase 3 COVID-19 vaccine trial.

The Quality of Life Medical and Research Center, 5390 E. Erickson Drive, will be one of 87 clinics nationwide conducting Phase 3 trials of Moderna’s mRNA-1273 COVID-19 vaccine.