Bills vs. Titans: Follow the latest scores and updates from MNF

Heads up: Sugar Skulls are here, determined to make a splash in inaugural season
Share this
1 of 3 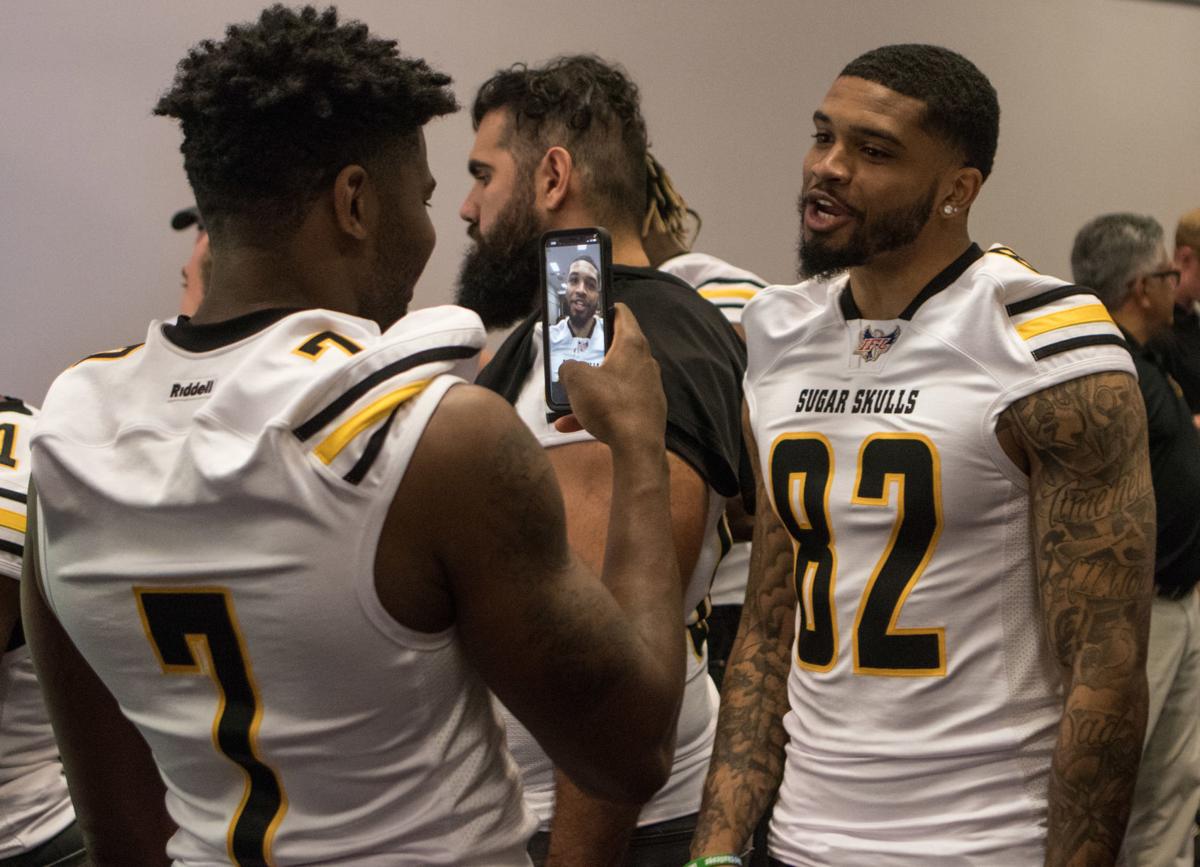 Cam Gaddis takes a picture of Tucson Sugar Skulls teammate Rico Brown during the team’s first media day Wednesday. The Sugar Skulls begin their inaugural season Sunday in San Diego when they take on the Strike Force. The Sugar Skulls’ first home game will be March 10 at Tucson Arena. 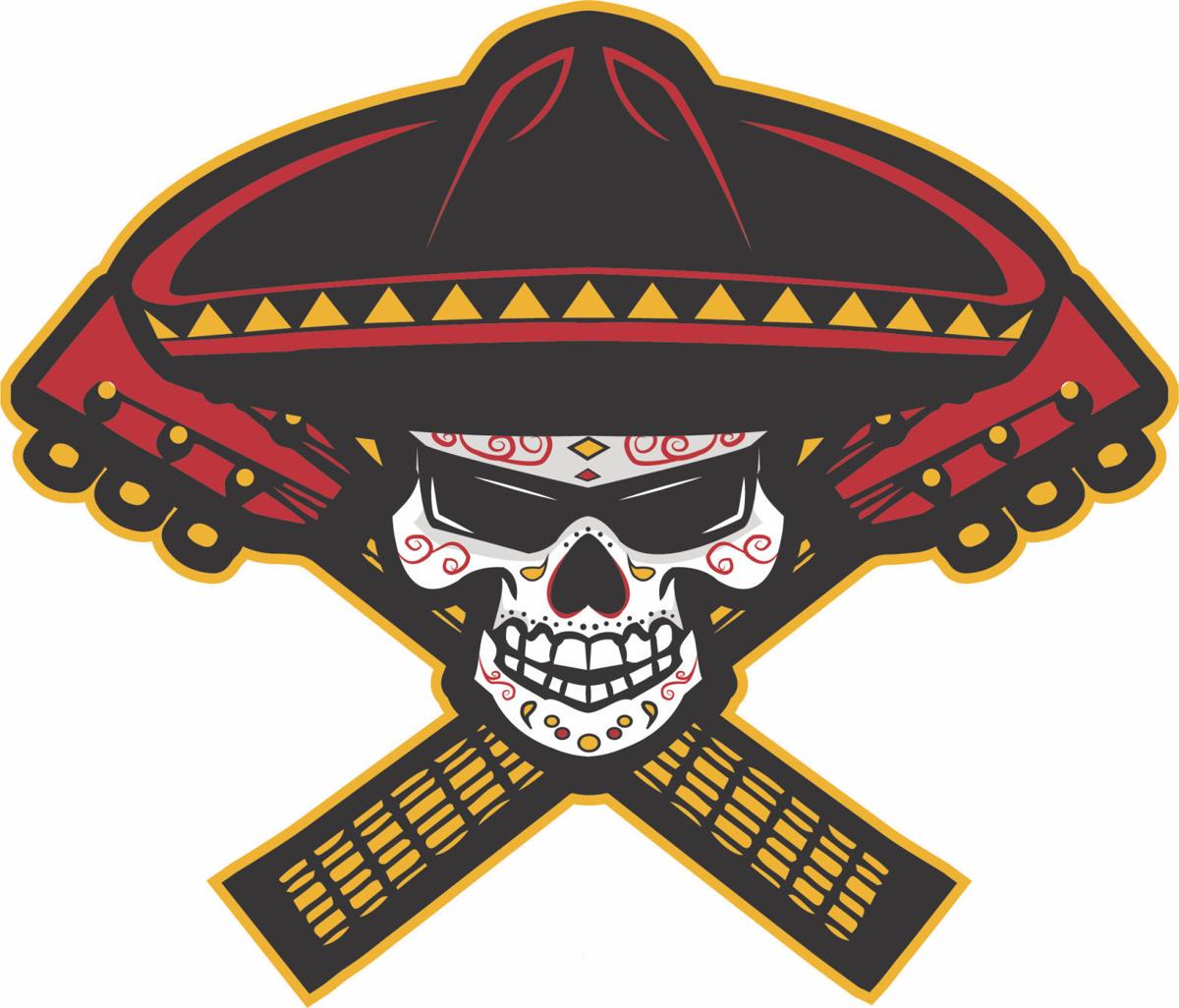 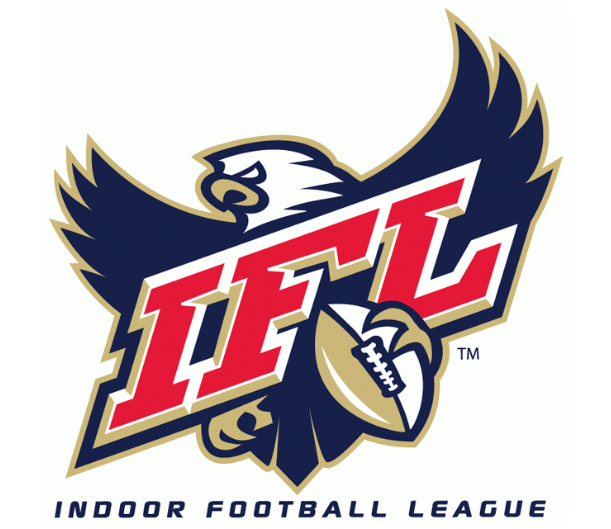 When the Tucson Sugar Skulls take the field Sunday evening for their Indoor Football League season opener at the San Diego Strike Force, a new chapter in Tucson sports will begin.

The city’s sweet-sounding football team will join a lengthy list of professional franchises that have called the Old Pueblo home. Expectations are high — especially with the powerhouse Arizona Rattlers playing up Interstate 10 in Phoenix, and Kevin Guy — arguably indoor football’s most notable figure — owning the Tucson team.

A win at San Diego’s Pechanga Arena on Sunday would be the capper on an important afternoon for the Indoor Football League expansion franchise. But even if the Sugar Skulls lose, there’s something to be said about being official — and there’s a home game coming next week. Tucson will host the Bismarck Bucks on March 10 at 3 p.m.

Tucson was the spring training home of the Cleveland Indians, Colorado Rockies, Arizona Diamondbacks and Chicago White Sox. The minor-league Tucson Toros began their first season at Hi Corbett Field in 1969. After four seasons as a White Sox affiliate, the Toros were associated with the Oakland A’s, Texas Rangers, Houston Astros and Milwaukee Brewers. When the Arizona Diamondbacks debuted in 1998, the Toros changed their name to the Sidewinders and moved south to Kino Stadium.

The Sidewinders won a Pacific Coast League championship before they were purchased, moved to Reno and renamed the Aces in 2008. The Tucson Padres stopped over on their way to becoming the El Paso Chihuahuas, but things really haven’t been the same since.

Well, at least until recently.

The AHL’s Tucson Roadrunners moved to Tucson Arena a few years ago, and have experienced success both on the ice and at the turnstiles. But the Roadrunners came from somewhere else — Springfield, Massachusetts, to be exact — and brought with them a way of doing things. The Sugar Skulls, in many ways, started from scratch.

“Starting a franchise and an expansion team is not easy,” Guy said. “There’s a lot of work that goes into it.”

First, Guy had to find staff. Then, the front office had to sell tickets and sponsorships while dreaming up promotions and engaging with the community. Next, Guy and his staff had to come up with a name. The Sugar Skulls name was unveiled in September following a monthlong name-the-team contest. The team’s color scheme of black, Mexican marigold and red were splashed across a menacing-looking logo.

Coleman watched hours of film and evaluated hundreds of players between the time he was hired until the moment Tucson finalized its roster of 26 players, which is a potpourri of Power 5 conference athletes, players with IFL experience and rookies who hail from across the country. Four of the final 26 — offensive linemen Alex Rios and Antonio Rosales, defensive end Robert Metz and cornerback Cameron Gaddis — hail from Tucson.

“I’m proud, man,” Gaddis said. “Every time I come out here, I have a lot of pride. I’m playing for my city and my hometown, my family and friends. This is my NFL right now. I’m coming out here with everything, and I play with a lot of passion and pride.”

Now comes the best part — the games. Coleman is determined to make a splash, and then make the playoffs.

“The ‘give me three years, give me four years,’ I don’t believe in that. If you do what is right and you bring in the right people, recruit the right players and get everyone on the same page without it having it be just about the X’s and O’s, it can be done,” Coleman said. “You’re not gonna hear, ‘give me some time.’ You’re not gonna hear that from me. This will be the last time you hear it from me. I’m a firm believer in as long as you have everything in place, you can get it done.”

So pro football is here. Will it thrive?

“This is going to be a great fit,” Guy said. “We’re in a space where Tucson needed some entertainment during the spring and summer months so I feel like these are exciting times. I promise you, we’re gonna bring a winner to town and we’re gonna be a part of this community.”

All about indoor football

The IFL is slightly different than any other brand of professional football. How so? We've got you covered. Here's everything you need to know about indoor football.

1. Players per side. In the IFL, eight players are allowed on each side of the ball. The IFL only allows three offensive and defensive linemen, with the rest identified as skill players. On offense: Quarterback, three offensive linemen, running back and three wide receivers. On defense: three defensive linemen and skill players, depending on the scheme. Linebackers cannnot blitz the quarterback unless they identify themselves to the offense as the blitzer, typically by raising their hand. The blitzer must start at least five yards away from the line of scrimmage.

2. Roster size. Each team has a gameday roster of 21 active players with four reserves.

5. Field size. IFL games are played indoors on fields that are 50 yards long and 85 feet wide — the same dimensions as a hockey rink. Field goal posts are 10 feet wide and can be up to 20 feet tall, with the crossbar at least 10 feet off the ground. Seating capacity depends on the size of the arena. Talking Stick Resort Arena, home of the Arizona Rattlers, holds 18,422 seats. Tucson Arena can hold up to 9,275 fans.

6. Rules. There is also no out of bounds in the IFL. The play of field is surrounded by three inches of padding and if the ball carrier touches the padding, the ball is marked dead at the spot.

7. Scoring: Touchdowns are worth six points, field goals are worth three and safeties and two-point conversions are worth two, just like traditional football. But the IFL also awards four points for drop-kick field field goals.

What's in a name?

The Tucson Sugar Skulls have joined the pantheon of amateur and professional sports team names in Tucson. Here's a close-to-complete guide, courtesy of the Arizona Daily Star's Dave Ord:

Note: In 1973, the Pittsburgh Condors of the ABA played their last “home game” in Tucson after leaving Pittsburgh.

Sahuaro High School graduate tried out for Tucson team before latching on with San Diego.

Black, yellow and white options should give IFL expansion team a unique look.

Wednesday’s joint practice between the Tucson Sugar Skulls and Arizona Rattlers served its purpose: It gauged where each team stands with the …

Justin Spears and Dominic Baciocco analyze Arizona's 26-point loss at Oregon and what went wrong for the Wildcats in the second half. How much…

The Tucson Sugar Skulls kickoff their inaugural season on the road against the San Diego Strike Force. You can watch the game here, which is b…

Tucson hosts the Bismarck Bucks at Tucson Arena this weekend.

Cecil is joining the Tucson Sugar Skulls' broadcast team as a color analyst.

FC Tucson has turned pro. On March 30, the team will play its first-ever match in USL League One.

Cam Gaddis takes a picture of Tucson Sugar Skulls teammate Rico Brown during the team’s first media day Wednesday. The Sugar Skulls begin their inaugural season Sunday in San Diego when they take on the Strike Force. The Sugar Skulls’ first home game will be March 10 at Tucson Arena. 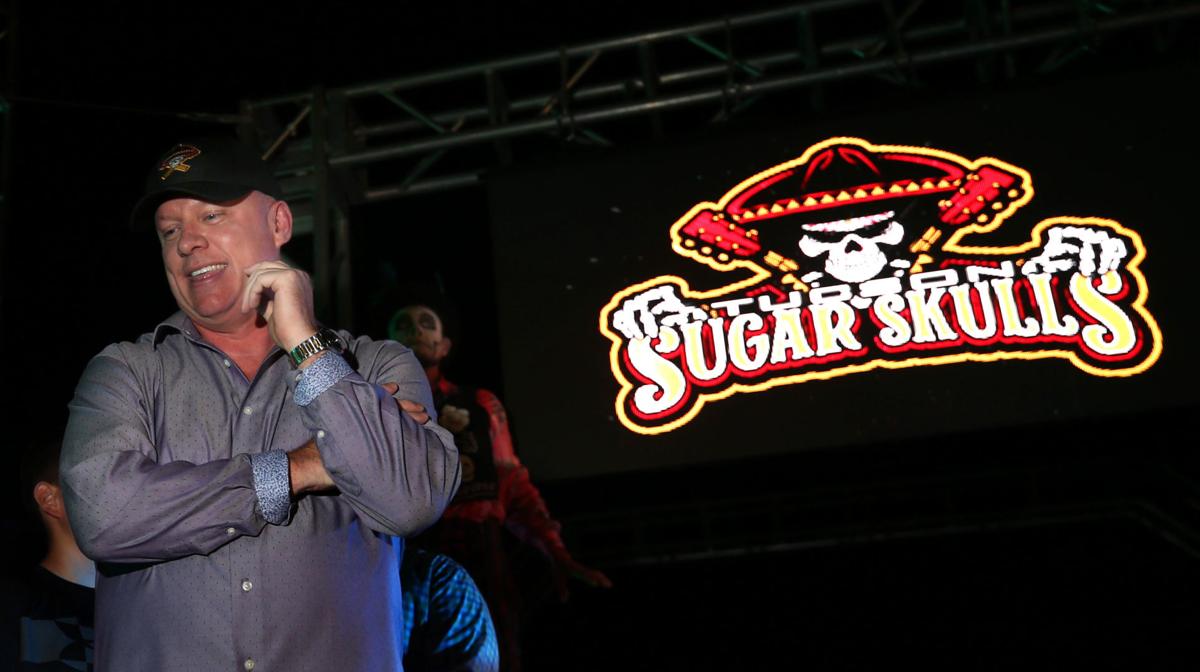 “We wanted to honor Tucson,” says owner Kevin Guy of the team name for the city’s new Indoor Football League franchise. The team will share the Tucson Arena with the Tucson Roadrunners of the American Hockey League. 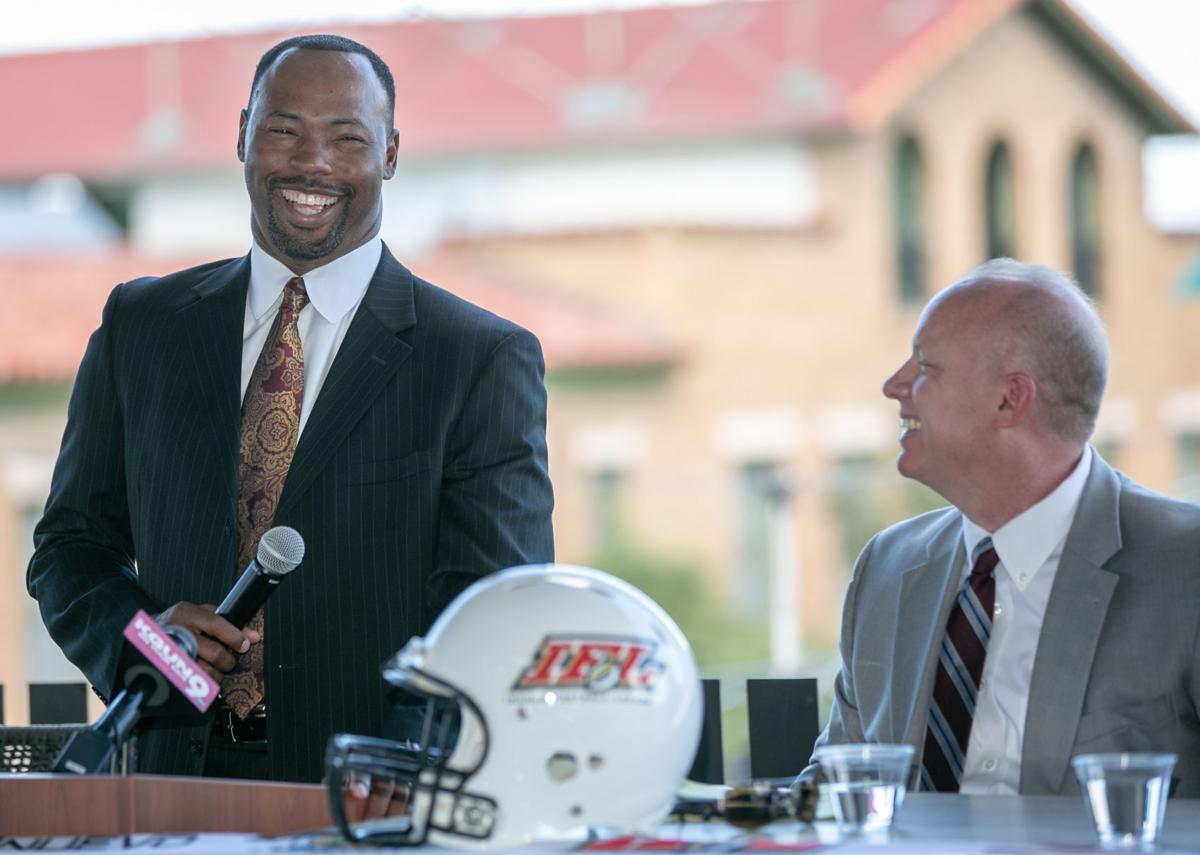 Marcus Coleman, who played at Texas Tech before his 11 seasons as a defensive back in the NFL, says he returned to the game, in its indoor form, because “I missed the grind.” 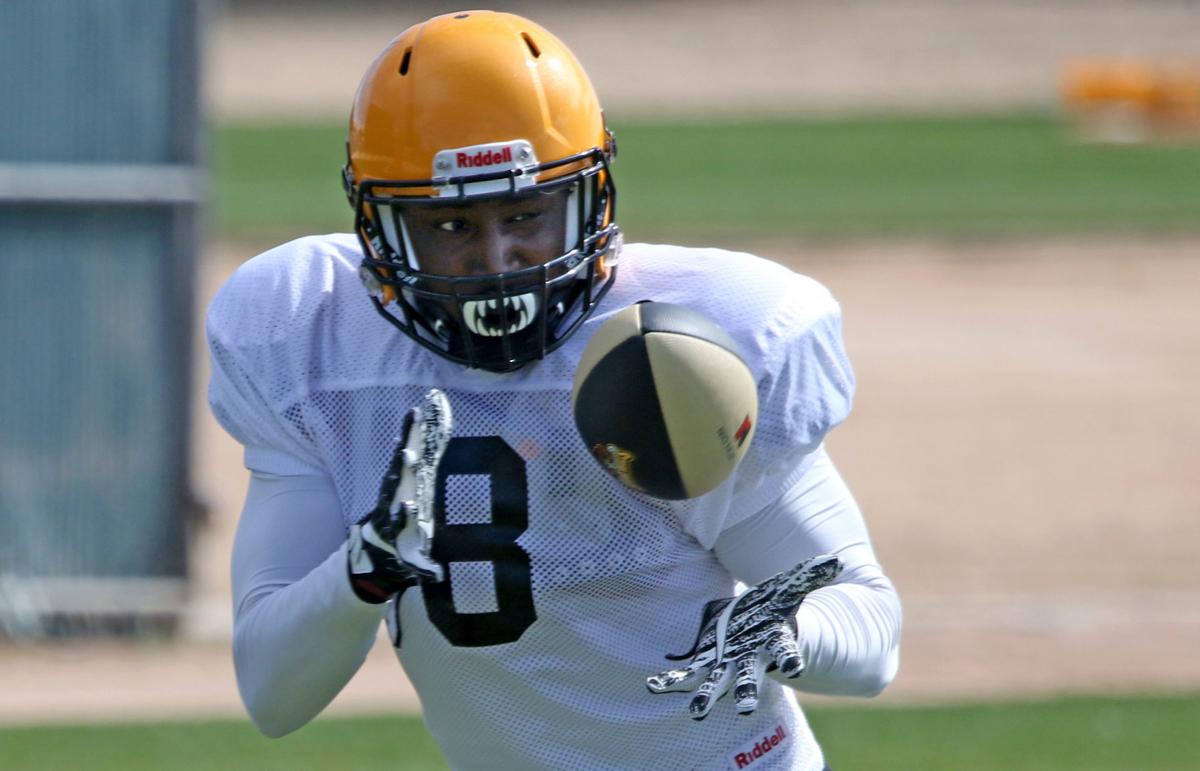