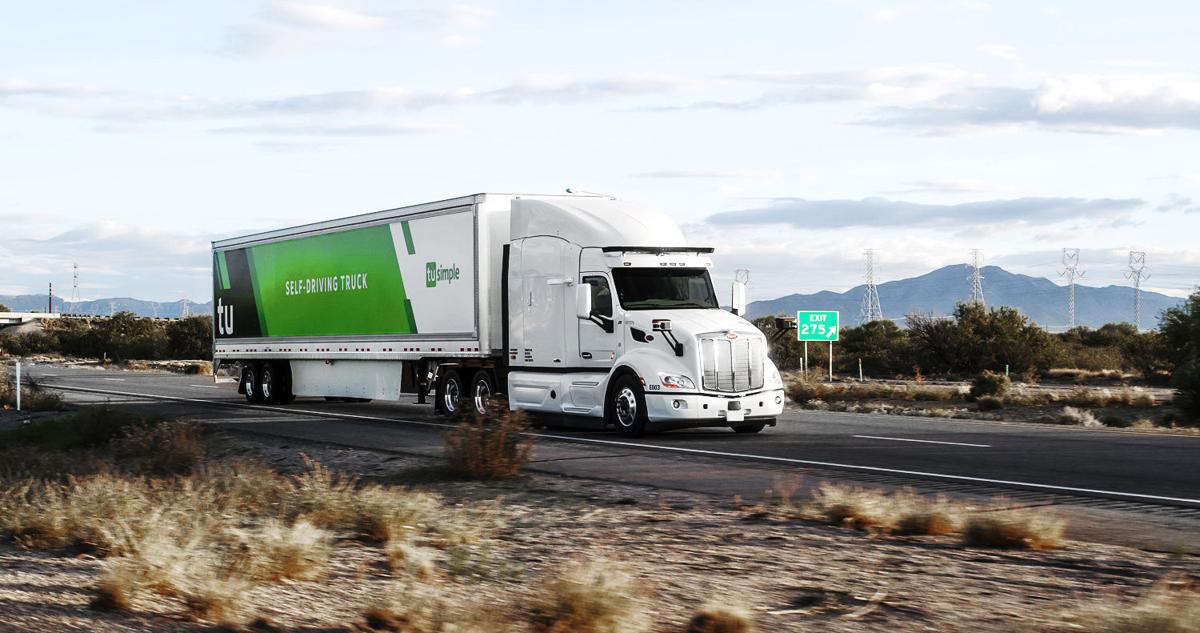 A TuSimple tractor-trailer rig hits the road during testing in Arizona. The trucks operate autonomously, though a driver and safety engineer are required to go along for the ride for now. The company will expand its test center and trucking hub in Tucson. 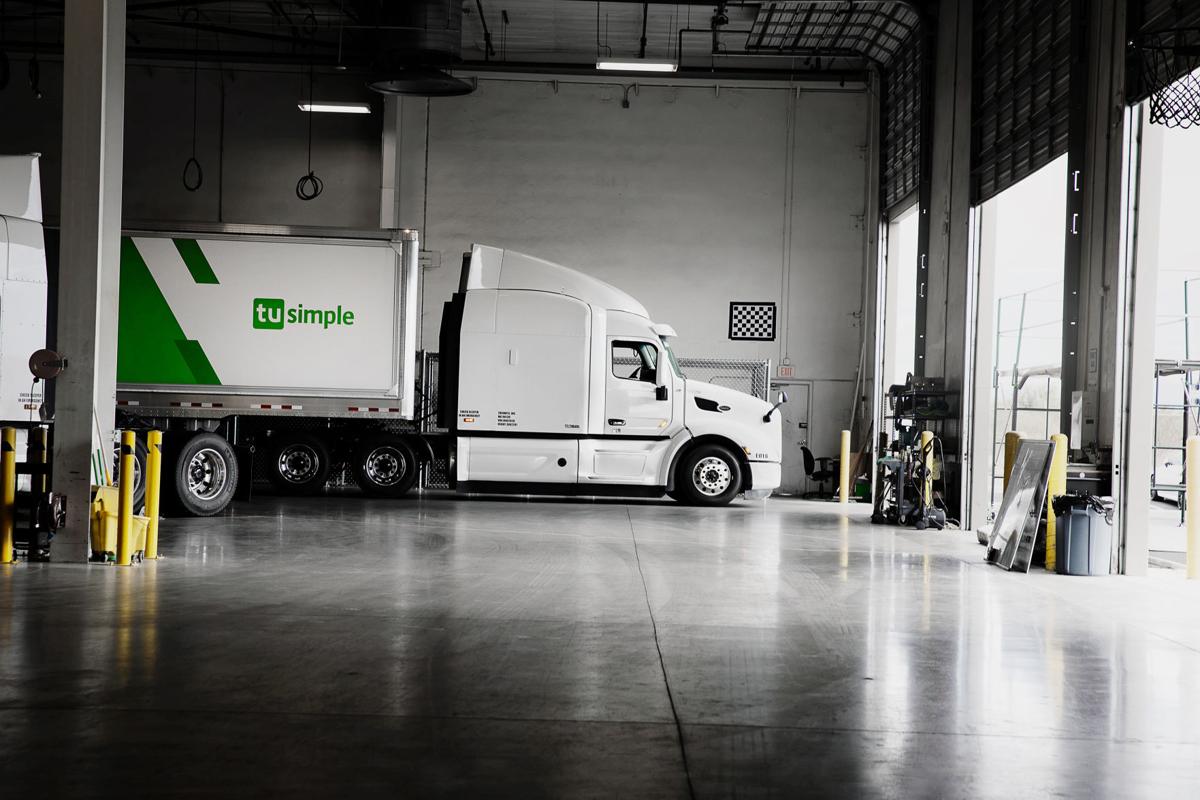 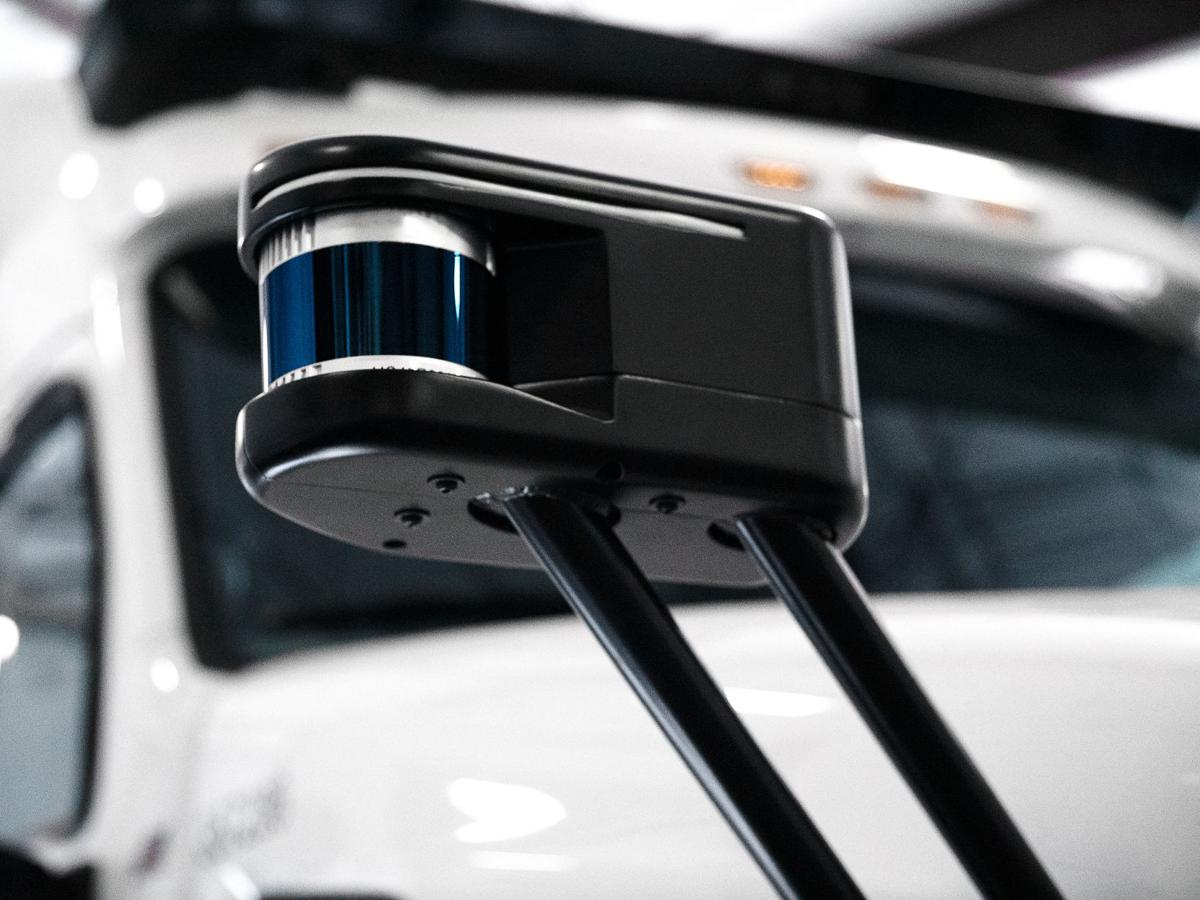 A laser rangefinding sensor known as lidar is used on TuSimple’s autonomous trucks, along with high-definition cameras and radar to help the truck navigate its surroundings.

Self-driving truck pioneer TuSimple is expanding its Tucson operation in a big way, as it builds out a nationwide network of autonomous commercial trucks and adds major new trucking partners.

The company will expand its test center and trucking hub on East Old Vail Road by 35,000 square feet and add more than 100 jobs over the next year or so, said Robert Brown, senior director of external affairs for San Diego-based TuSimple.

The new employees, including engineers and drivers, will join about 200 Tucson workers at the current 50,000-square-foot facility at 9538 E. Old Vail Road to help the company build out its autonomous trucking network, Brown said.

Partnering with landowner Diamond Ventures, the company plans to break ground on its building expansion in the first quarter and expects construction to be completed by the end of 2021, Brown said.

While it has been operating its fleet of more than 50 autonomous-capable trucks with a safety driver and engineer, TuSimple hopes to demonstrate fully driverless operations on limited routes of its hub-to-hub interstate network sometime in 2021, he said.

Despite the pandemic, 2020 was a busy year for TuSimple, which in 2019 welcomed UPS as an investor and partner to test self-driving delivery vehicles and launched a pilot program with the U.S. Postal Service between Phoenix and Tucson.

“If you mailed a Christmas card or Hanukkah card or whatever (from Tucson), it might have been on our truck,” Brown said.

The privately held startup, which has been running paid loads from its Tucson test center since 2017, also has been running loads for food distributor McLane Cos. and is also testing autonomous trucks in China through a hub and development center in Shanghai.

TuSimple says that its systems can potentially save users up to 40% on operating costs, while addressing a current shortage of some 60,000 truck drivers expected to double over the next few years.

TuSimple is in the process of building a new trucking hub in Fort Worth, Texas, to serve the Dallas-Fort Worth area and link up with other Texas cities.

“Think of it almost as a digital railroad, where we map it from terminal to terminal,” Brown said.

The company’s proprietary autonomous driving systems feature high-definition mapping and camera technology with radar and a form of laser range-finding known as lidar, that feed data into onboard artificial intelligence software to navigate the roadways.

“They’re going to go exactly where we tell them to go, and where they can only go,” Brown said of the company’s trucks.

Later in July, TuSimple announced an agreement with Navistar, a major U.S. truck maker descended from the former International Harvester, to build autonomous trucks using TuSimple technology from the ground up.

TuSimple had previously partnered with Peterbilt, another major truckmaker, as well as Navistar, to retrofit its trucks for autonomous operation and has been using those trucks during its pilot runs.

Brown said the company expects the combination of the freight network and the availability of purpose-built trucks to run on that network to jump-start the company’s market plans.

“We now finally have a path to commercialization, a path for folks like UPS to purchase actual AV (autonomous vehicle) trucks and then TuSimple as the virtual driver and monitor of those vehicles. That’s the end game, that’s where we start making money rather than raising money.”

In September, TuSimple announced another key partnership with The Traton Group, Volkswagen AG’s heavy-truck business, which took an undisclosed minority stake in TuSimple as part of an agreement between the two companies to develop self-driving trucks.

Traton has since announced it would acquire Navistar in a pending deal worth an estimated $3.7 billion.

Founded in 2015 by a group of Chinese scientists and entrepreneurs, TuSimple was backed initially with major investments from Sina Corp., a major Chinese tech company, and computer hardware maker Nvidia.

With additional investments from UPS, Traton and others, the company has announced investments totaling nearly $300 million.

Though it has been widely reported that TuSimple finalized a new investment round of $350 million in December, the company declined to comment on those reports.

In November, the company announced an agreement with tire-making giant Goodyear to supply tires and related management systems to the startup’s freight network and partner on tire-wear and fuel-savings studies on autonomous trucks.

While TuSimple has lined up some major partners and raised hundreds of millions of dollars, it still faces significant regulatory hurdles and stiff competition from established trucking industry heavyweights like Daimler and Volvo, and well-financed startups such as Alphabet Inc.’s Waymo, which has partnered with Daimler, and San Francisco-based Embark Trucks, which is partnered with Peterbilt.

“It’s driverless in certain areas,” he said, noting the company will still need to use drivers for inspection, city driving and deliveries.

“The point-to-point makes the most logical sense, because once you get off the highway, now you’ve entered into high complexity and that adds compounding problems for safety, for cost, for regulation, for all the other things,” Ramsey said. “Just being able to tell what color a traffic light is — that’s an enormous computer power requirement on the vehicle.”

Ramsey says it’s too early to tell how the regulations and market will shake out or whether TuSimple or other startups will survive.

But with strong financing, good industry partnerships and more experience field testing self-driving trucks than many competitors, TuSimple has a good shot as any at success, Ramsey said.

“TuSimple appears to be one of the five or six autonomous trucking companies that are going to make it past the starting line,” he said.

But it remains to be seen if TuSimple can make it through the research and development phase and build a viable robo-trucking business, or whether it will be acquired by a larger company, he said.

“Regulation is an issue that will need to get straightened out, but I think that is probably not as big of an issue as, can you make it work and can you make it business success?” Ramsay said.

World Gym International is opening its first Arizona gym in Tucson this summer.

By issuing bond-like instruments called certificates of participation, the city will work to fund the growing obligation to the Public Safety Personnel Retirement System, which is currently unfunded by about $1.5 billion.

TuSimple, which has a major test center and freight hub in Tucson, faces federal scrutiny of its biggest Chinese investor.

The self-driving truck developer TuSimple has a major technology center and freight hub in Tucson.

A TuSimple tractor-trailer rig hits the road during testing in Arizona. The trucks operate autonomously, though a driver and safety engineer are required to go along for the ride for now. The company will expand its test center and trucking hub in Tucson.

A laser rangefinding sensor known as lidar is used on TuSimple’s autonomous trucks, along with high-definition cameras and radar to help the truck navigate its surroundings.