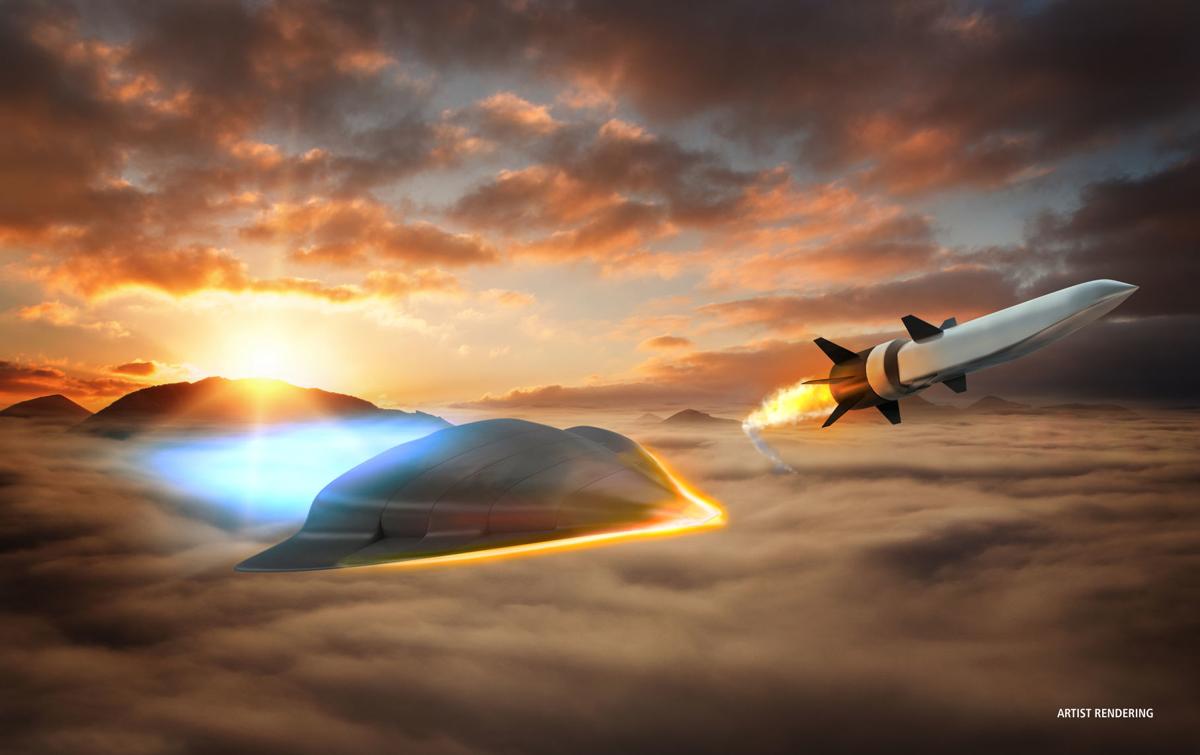 This rendering shows concepts for two types of hypersonic weapons, a boost-glide vehicle (left) and an air-breathing jet-powered craft. Hypersonics are designed to fly aerodynamically in the upper atmosphere at sustained speeds five times the speed of sound. 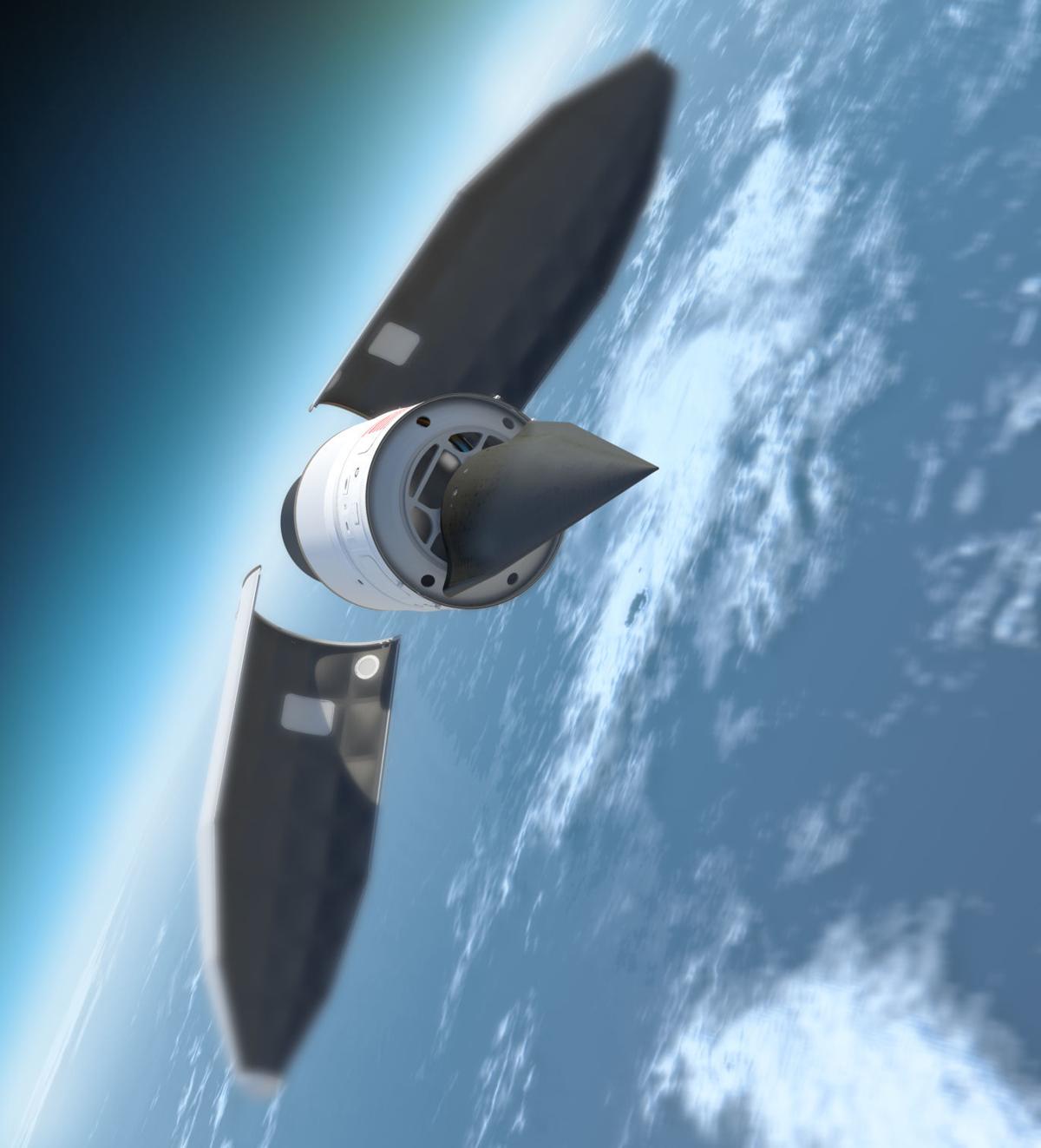 Tucson-based Raytheon Missile Systems is among the major contractors leading the new development effort — and reaping billions of dollars in defense contracts.

Hypersonic missiles are designed to fly aerodynamically in the upper atmosphere at sustained speeds above Mach 5, or five times the speed of sound, with the ability to maneuver at high speed at altitudes that avoid long-range radars.

That makes hypersonics very difficult to intercept compared with ballistic missiles, which fly at supersonic and hypersonic speeds in a somewhat predictable arc.

“Because they (hypersonics) are traveling so fast, they really stress a lot of defensive systems,” said Artie Mabbett, who heads Raytheon’s hypersonic efforts in Tucson as director of advanced high-speed weapons.

“Now, I don’t have two hours to make a decision about something, I have minutes to make a decision, so they become a lot more effective,” he said, noting that their maneuverability only adds to the difficulty of intercepting hypersonic weapons.

As offensive weapons, hypersonics have the advantage of being able to strike time-critical targets rapidly as situations change and opportunities present themselves, Mabbett said.

The U.S. effort to develop hypersonic missiles is focused on two types: hypersonic glide vehicles, also known as “boost-glide” systems, which are launched from a rocket before gliding to a target, and hypersonic cruise missiles powered by high-speed, air-breathing engines, or “scramjets.”

Raytheon is deeply involved in efforts to create both types of hypersonic missiles, as well as counter-hypersonics.

While many of the contracts remain classified, Raytheon said it expected companywide revenue from hypersonics programs to reach about $300 million in 2019, with a growing backlog through 2020.

Raytheon also has partnered with Northrop Grumman under a $200 million contract on the HAWC program to develop an air-breathing cruise missile for DARPA and the Air Force.

Another big player in the hypersonic missile development surge are Lockheed Martin, which said it expected $600 million in revenue from hypersonics contracts last year and more than $3 billion over the next two years.

Overall, the Pentagon is seeking $3.2 billion for hypersonics programs in fiscal 2021, and the Air Force, Navy and Army are seeking a total of more than $7 billion over the five-year Future Years Defense Program, according to the Congressional Research Service.

Not everyone is sure the new hypersonic arms race is wise, or worth it.

Some members of Congress and arms-control advocates contend that the threat of hypersonic missiles are overhyped and warn against a reflexive response to testing by China and Russia.

The Union of Concerned Scientists cite major technical challenges — including sustaining hypersonic speeds over long distances — that will cost billions of dollars to overcome, with money that may be better spent on other defensive measures.

A missile-defense advocate said that the technical challenges surrounding hypersonic missiles will eventually be solved, and the U.S. needs to keep up especially with China , which appears ahead of the U.S. on testing hypersonics.

“We would not be spending all this money on this if it weren’t a threat,” Ellison said, noting that pinpoint accuracy is not necessary for missiles tipped with nuclear warheads.

Ellison sad he also believes the Trump administration is boosting its hypersonics programs to drive China to arms talks through an “escalate to negotiate” strategy.

But Raytheon and other U.S. hypersonics developers still have some big technical problems to solve before fielding hypersonic missiles.

Hypersonic vehicles must stand up under a buildup of intense heat created by atmospheric friction, requiring new materials and airframe designs, said Mabbett, an aerospace engineer who spent nearly 15 years with the Defense Department at the Navy and DARPA before joining Raytheon in 2016.

That’s much harder than building a ballistic missile warhead that punches through the atmosphere and heats up relatively briefly toward the end of its flight, he noted.

“Not only are you dealing with that huge thermal shock, now you’re dealing with maintaining that environment for the entire flight,” Mabbett said.

“It becomes really complex when you combine that aerothermal environment with the guidance, navigation and control and how it works as an integrated system.”

Counter-hypersonics present additional challenges of speed and maneuverability and may call for layers of defense systems, much like the nation’s evolving ballistic-missile defense system uses different systems to intercept enemy missiles at different stages of flight.

“At the end of the day, a layered defense is what we are going to need,” he said.

Developing sophisticated hypersonic technologies takes a lot of talent and testing, and Raytheon is partnering with the University of Arizona to help satisfy those needs.

The company has used the UA’s wind-tunnel facilities for testing under faculty research contracts and expects to do more with the school after the UA recently completed installation of a new, hypersonic wind tunnel and added another subsonic tunnel.

Mabbett said Raytheon — a major employer of UA engineering grads — is working with the university to develop more academic curriculum and research programs in hypersonic engineering, including a possible masters’ degree in the area and more doctorate-level research.

“Additionally, we’re working very closely with them to garner more federal and state funds to get some of their wind tunnels up and running, so the students get the chance to get some real-world experience while they’re in college,” he said.

UA-ARC President and CEO Austin Yamada, a former Department of Defense deputy assistant secretary, said because of its structure UA-ARC will be able to receive federal research contracts for classified defense research that the UA can’t qualify for because of its public nature.

“The goals that Raytheon have align really well with what the University of Arizona is trying to do right now in hypersonics, and as no surprise, aligns very well with the DoD and what the U.S. government’s needs are in the area.”

Wei Sun pleaded guilty to one count of violating federal arms-control laws after taking a computer containing sensitive information with him on a trip to China in 2018.

Asarco, striking workers continue to be at odds after four months

Organizers say donations are coming in from near and far and elected officials have continued to show support as Asarco workers commit to continuing the strike until they get a fair deal.

Lockheed to snap up satellite-software tech from bankrupt Vector Launch

The small-rocket launch assets of the Tucson-based company are still up for sale.

The Los Angeles City Council is exploring a clean energy partnership with the Navajo Nation following the closure of Arizona's Navajo Generating Station, once the third largest carbon emitter in the U.S.

Raytheon Co. and United Technologies Corporation say they’ve won the necessary regulatory approvals for their all-stock merger and expect to close the merger prior to the opening of trading on the New York Stock Exchange on Friday, April 3.

The Tucson-based Raytheon unit won't be affected by the cuts, though a few local workers were recently let go in a post-merger consolidation.

The Air Force contract calls for Raytheon to develop a test-ready copy of the Miniature Self Defense Munition by 2023, but other details remain secret.

Global eye-care giant Alcon licensed the technoloy from the University of Arizona to create lens implants that help cataract patients see at any distance.

Raytheon Missiles & Defense — the Tucson region’s largest employer — was awarded a contract in 2016 to develop the HAWC missile.

This rendering shows concepts for two types of hypersonic weapons, a boost-glide vehicle (left) and an air-breathing jet-powered craft. Hypersonics are designed to fly aerodynamically in the upper atmosphere at sustained speeds five times the speed of sound.